Infection with the hepatitis C virus (HCV) is a leading cause of chronic liver disease world-wide. Pathogenesis of liver injury is not fully understood. There is a complex relationship between HCV and its host. The infection leads to viral persistence and chronic disease in a very high proportion of cases, despite broad humoral and cellular immunological responses to viral proteins. High rate of mutation leads to the generation of quasispecies, which continuously evolve in infected individuals. Recent data suggest that cytotoxic T cells and cytokines produced by both CD4+ (T helper) and cytotoxic T cells, may be responsible for much of the damage that occurs in the livers of infected patients.
Cytokines play a key role in the modulation of immune responses. Two distinct patterns of cytokines production may occur.’ Type I responses are characterized by production of IL­2, TNF-a and IFN-y, which prime and maintain antigen-specific cellular immunity23 and are important in defense against viruses. Type 2 responses are characterized by IL-4, IL-5, and IL- 10, which promote humoral immune responses. Interleukin (IL)I is a pro-inflammatory cytokine synthesized by mainly mononuclear cells. It stimulates T and B cell proliferation and cytokine production. Type 2 cells secrete IL-10, which is an anti-inflammatory cytokine and down regulates effective cell mediated mechanisms. The maximal capacity of cytokine production varies between individuals and may correlate with polymorphism in cytokine gene promoters. The objective of this study was to analyze the role of allelic or genotype variations of IL-1ß and IL-10 and its association with hepatocellular injury as suggested by ALT.

Fifty six patients (31 males, 25 females) of chronic hepatitis C were included in this study. Their mean age was 37.5± 12.0 years (range 16-62). HCV RNA was determined by reverse transcriptase polymerase chain reaction (Roche Molecular Systems, Nutley, NJ) in all cases. This assay had a sensitivity of detecting HCV RNA _100 copies/mi. Fifty-one patients were HCV RNA positive and type 3 was the predominant genotype. The participants had not received interferon therapy. They did not have any co-infection with either the human immunodeficiency virus or hepatitis B and no other associated forms of chronic liver disease. For cytokine polymorphism DNA was extracted from the whole blood by proteinase K digestion of fresh peripheral mononuclear cells, followed by phenolic extraction and ethanol precipitation. After amplification with polymerase chain reactions, the distribution of cytokine gene polymorphisms of interleukin (IL) 1 ß and JL-10 was examined in these patients. Single nucleotide polymorphisms (SNPs) were detennined using sequence specific oligonucleotide primers as described previously.4-6 Biallelic polymorphism was assessed for the IL­10 promotor at position -1082 (A versus G) and for IL-1ß pomotor at position-I 15 (C versus T). 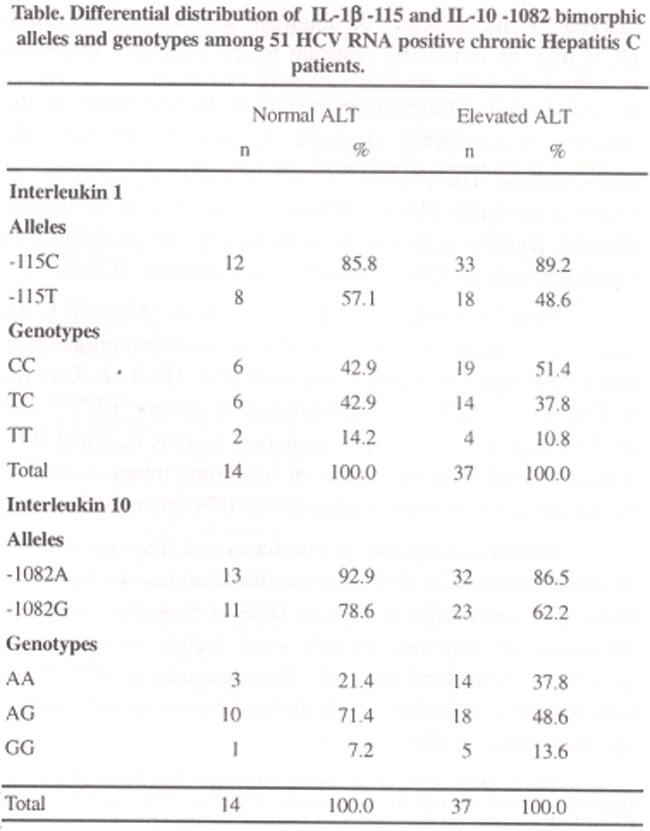 There was no statistical difference in the distribution. However, it was noted that IL-10 genotype AG was more prevalent in HCV RNA positive patients with normal ALT (10/14 patients).

Cytokines play an important role in the defense against viral infections, both indirectly, through determination of the predominant pattern of host response, and directly, through inhibition of viral replication. However, in the context of an inflammatory response against a virus, cytokines may also lead to liver damage. Approximately 80 to 90% of acutely infected individuals develop persistent infection after acute disease; about one-half of them have elevated transaminases indicative of ongoing liver inflammation.7 Chronic HCV infection is marked by the presence of abundant amounts of cytokines. HCV may be inherently resistant to the effects of cytokines produced by HCV-specific cytotoxic T lymphocytes. Thus, the continuing inflammation results in liver damage in the absence of complete virologic recovery.8 In fact, the expression of these cytokines correlates with the amount of inflammation. The presence of an ongoing cellular immune response probably also contributes to the process of hepatic fibrosis. Kupifer cells can be activated by the production of cytokines such as TNF-a, which in turn produce TGF-ß.9
Most liver-infiltrating T cells in chronic hepatitis C are type 1 cells. Studies to date in liver tissue show that intrahepatic mRNA for type 1-like cytokines, such as IL-1ß, IL-2, IL-6, IL­8, TNF-cz, and IFN-y are upregulated in chronic HCV.10 The level of expression of type 1 cytokines, such as IL-2 and IFN­y, is correlated with the degree of histologic injury as well as the likelihood of nonresponsiveness to IFN-atherapy.11
Sustained response to interferon and ribavirin, defined as undetectable HCV RNA at 6 months after discontinuation of therapy, is achievable in 30% to 60% of treated patients.12,13 Predictors of response include viral factors such as viral genotypes, viral load and early disappearance of HCV RNA after initiation of therapy while the host factors include gender, age and degree of In recent years, increasing attention has been drawn to the role of host variation in cytokine levels in inflammatory and immune responses. Interleukin 10 (IL-10) is a potent anti-inflammatory Th2 cytokine that down-regulates the expression of major histocompatibility complex (MHC) class I and class II molecules, as well as the production of Thi cytokines.15-20 IL-10 levels differ widely between individuals, possibly because of polymorphisms in the promoter region of the IL-10 gene.21.22 Specifically, three single nucleotide polymorphisms (SNPs) in the promoter (at positions -1082, -819, and -592 relative to the transcription start site) form three SNP combinations (ATA, ACC, 0CC) associated with differential IL- 10 expression.22-24 It is reasonable to assume that patients of hepatitis C who produce high levels of IL-10 will have less hepatocellular injury and less ability to control infection.
There might be an association of cytokine gene polymorphism and susceptibility to hepatitis C infection. Hohler et al25 reported such an association with polymorphism at the TNF-a promoter. Patients with low secretion of IL-l0 should have better capability to eliminate the hepatitis infection. Perhaps low IL-l0 production can skew the immune system into the Thi type of response, facilitating the clearance of viral load. -1082A allele is associated with reduced IL-10 production in vitro.23 Individuals who are homozygous for IL-10 A at position -1082 have significantly lower levels of plasma IL-10 levels. Interleukin 10 polymorphisms may also modulate the response to interferon therapy. It has been shown that hepatitis C patients, genotyped as high IL-lO producers, have poor response to IFN-a therapy.24 These patients may benefit from additional treatment strategies designed to enhance a T-helper type 1 (Thi) response. Such polymorphisms may also predict sustained viral response to antiviral therapy.26 Liver transplant recipients, who are genotyped as having low production profile of IL- 10, are more prone to rejection and less likely to have hepatitis C recurrence.27
We, in this study, determined SNP only at position -1082 in case of 1L-10 and position -115 in IL-1ß and analyzed the frequency of its distribution and any correlation with the ALT level. Allelic variation of IL-10 at position -1082 influences plasma IL-10 levels as discussed above. The IL-10 gene polymorphism at -511 has also been shown to play a role in modulating the disease process e.g. development of coronary arterial disease in patients with chlamydia pneumoniae infection28 and gastric mucosal atrophy.29 In our series no significant difference in the genotype profile of IL-1ß
-115 and IL-lO -1082 was detected between patients with normal or elevated ALT. This may be due to the small sample size or because ALT level is not a good parameter to judge the ongoing hepatocellular injury. There is a need of a larger well-controlled study to suggest any role of cytokine gene polymorphism and hepatocellular injury in hepatitis C by assessing histological activity. Cytokine gene polymorphism of IL-1 TNFa, TGF ß IL-10 and INFyat different promoter sites should be considered in such a study.

Prevalence of Anxiety and Depression among Medical Students of Private University

Lipoprotein (a) and Glycaemic control in Pakistani Subjects with Diabetes Mellitus