Ewing\'s sarcoma is the second most common tumour of bone in childhood. Less frequently it occurs in soft tissues. In the European Intergroup Cooperative Ewing\'s sarcoma study (EICESS) the median age was 14 years. In the EICSS 24.7% of lesions presented in the pelvis, 16.4% in the femur, 16.7% below the knee, 12.1% in the ribs, 8.0% in the spine and 4.8% in the humerus.3
Ewing\'s family of tumour present both as osseous and extra osseous variants as well as in primitive neuroectodermal tumours (PNET\'S) of bone and soft tissue, peripheral primitive neuroectodermal tumour, Askin tumour and some central nervous system tumours.2 Primary Ewing\'s sarcoma occurring in the kidney is a rare neoplastic disease of high malignant potential with a tendency towards early metastases. Approximately 20% of patients present with metastatic disease. Effective local as well as systemic therapies are necessary to cure this highly virulent disease.3 The presentation and prognosis of the disease in this case was almost similar to that of ES of bone.
We report a case of a 13-year-old girl who was diagnosed to have Ewing\'s sarcoma of kidney with lung and liver metastases.

A 13 years young girl presented with right sided abdominal pain for one month and haematuria for 2 days. IVP was done which showed a non functioning right kidney. CT scan of abdomen and pelvis showed a large infiltrating mass measuring 6.0 x 9.0 cm occupying the central portion of the right kidney. The tumour was located entirely within the Gerota\'s fascia with no evidence of fascial breach at any level. There was evidence of peri renal lymphadenopathy. There was focus of non enhancing lesion in segment 4 of the liver measuring 1.0 x 1.5 cm. Multiple nodules were present in the lung bases bilaterally. Ultrasound guided Biopsy of right renal mass showed possibility of ES/PNET. She underwent right radical nephrectomy and the histopathology was consistent with a tumour with rounded blue cell and focally tumour was disrupting the renal capsule and extending into the peri renal fat. Hilum showed infiltration of tumour around the major blood vessels. The sections were submitted to a panel of immunohistochemical studies. PAS stain showed focal glycogen in tumour cells. Immunohistochemical studies showed strong positivity to Vimentin, MIC-2 and S-100 and focal positivity to EMA, Cytokeratin AE1/AE3 and Synaptophysin. Cytokeratin 7, LCA and Desmin were negative. On the basis of these findings diagnosis of Ewing\'s sarcoma/PNET of Kidney was made. 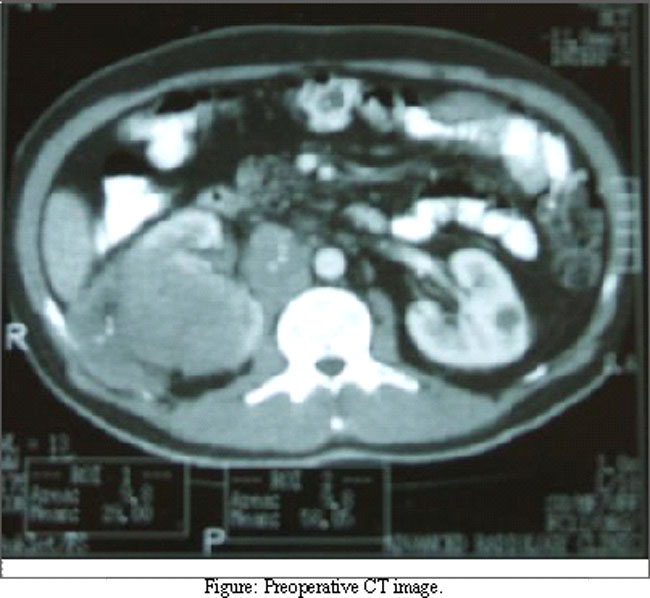 After confirmation of the diagnosis she received 6 cycles of CVD+IVE (3 cycles of cyclophosphamide, vincristine, doxorubicin and 3 cycles of vincristine, Etoposide and ifosphamide). This was followed by radiotherapy to tumour bed 50 Gy and later by 4 more cycles of chemotherapy with the same regime. The duration of chemotherapy was 11 months. CT scan of chest abdomen and pelvis done after 6 cycles of chemotherapy showed complete response in local as well as in distant areas and it was showing no evidence of disease at local site as well as in lungs. Repeat CT scan after completion of radiotherapy was also reported to show no evidence of disease. She was advised to have close follow up, unfortunately lung metastases reappeared 21 months after completion of therapy. At relapse of disease she was offered palliative radiotherapy to lungs for control of symptoms. There was slight improvement in her symptoms but expired 5 months after the discovery of recurrent lung mets.

Ewing\'s sarcoma (ES) initially was believed to be of perivascular endothelial origin. The Ewing\'s sarcoma family of tumours (EFT) includes ES of bone (ESB), extra osseous ES (EES), peripheral primitive neuroectodermal tumour of bone (pPNET), and malignant small-cell tumour of the thoracopulmonary region, or Askin\'s tumour, all of which are now known to be neoplasm\'s of neuroectodermal origin. Because the behaviour, prognosis, and treatment appear to be similar for all subsets of EFT, this histopathologic sub classification may not be clinically significant.4
Light microscopy shows a tumour of small, round blue cells that lacks markers for lymphoma, neuroblastoma and rhabdomyosarcoma. Cytogenetically 90% to 95% of the Ewing\'s family of tumours have a translocation between the EWS gene on chromosome 22 and the FLI1 gene on chromosome 11 [t (11:22) (q24:q12)] or the ERG gene on chromosome 21 [t (21; 22) (q22; q12)].5
Approximately 20% of patients present with metastatic disease, of metastatic patients, 44% present with lung metastases only and 51% have bone or bone marrow involvement (with or without lung metastases) and 5% present with metastases in other organs.3 Effective local and systemic therapies are necessary for the cure of Ewing\'s sarcoma. Most chemotherapy regimens are a combination of cyclophosphamide, doxorubicin (Adriamycin), vincristine dactinomycin, ifosphamide and etoposide. Both surgery and radiation therapy are effective local therapy for the primary lesion.6-8
Ewing\'s sarcoma/primitive neuroectodermal tumour of kidney is a rare and aggressive tumour, only few cases are reported in the literature. It has a rapid clinical progression with early metastases and death.2 Jimenez et al published clinicopathologic and immunohistochemical analysis of 11 cases of Primary Ewing\'s sarcoma/PNET of the kidney and mentioned a mean age of 18-49 years and mean follow up of 28 months (range 6-64 months) which showed 4 lung and pleural metastases, 1 bone metastases, liver metastases, 2 local recurrences and 5 deaths from disease (median time to death 16.8 months).9 In the case we are presenting the overall survival was 26 months with distant relapse free survival was 21 months, and the history of our case is almost similar to this analysis and represent a typical ES/PNET of kidney affecting a young female patient.
Since 1991, bone and soft tissue Ewing\'s tumour have been treated similarly. The 5 year overall survival rate of patient is more than 40% with localized disease at diagnosis. The prognosis of patients with metastatic disease at diagnosis is poor. In a report from the EICSS, the 5-year relapse free survival for patients with lung metastases only was 29%. In patients with metastatic disease at diagnosis, less than 50% of all Ewing\'s sarcoma patients survive and it has been difficult to show a significant improvement over the last 20 years. Presently dose intensification by decreasing the interval between cycles is being studied, using VACA/ifosphamide-etoposide chemotherapy. With regards to local therapy the focus should be on improving function and decreasing the incidence of long term sequelae. It is unlikely that refinements in local therapy with radiotherapy or surgery will significantly improve the cure rate. Metastases remain the primary mechanism of failure, and major improvements in the long term survival rates will probably not occur until the development of better systemic agents or genetic therapy targeted at the unique translocation that produce these malignancies.10,11

Esophageal Haemangioma: A case report and review of literature