The thyroid gland is a known but an unusual site for metastatic tumours from various primary sites. Primary smooth muscle tumours of thyroid are rare. Leiomyosarcoma of the thyroid gland whether of primary or metastatic origin should be distinguished from anaplastic carcinoma. Few cases of leiomyosarcoma metastatic to thyroid, diagnosed by fine needle aspiration cytology (FNAC) have been documented. We are reporting this case to highlight the importance of FNAC as a tool for diagnosing sarcomas and to plan further management accordingly. Ancillary techniques can be applied on FNAC and give comparative results to tissue sections.

The thyroid gland is a known but an unusual location for metastatic tumours from various primary sites.  Spindle cell malignant neoplasms of the thyroid usually arise as a component of anaplastic carcinoma; however, there are cases of primary and metastatic sarcomas reported in literature.  Primary thyroid leiomyosarcomas are extremely rare and such tumours carry a very poor prognosis. Thyroid gland is one of the largest vascular organs in the body and clinical and surgical cases have given an incidence of 3% for secondary malignancies of this organ.1 Nevertheless, thyroid metastases are not an exceptional finding at autopsy; they are encountered in 2 to 24% of the patients with malignant neoplasms.1 In 1998, Lam and Lo reported 79 patients with metastatic thyroid tumours.2 Thyroid metastases may masquerade as primary thyroid malignancies. Tumours of various histologic types and origins may involve the thyroid. Metastases from malignant melanoma, malignant phylloides tumour, nasopharyngeal carcinoma, choriocarcinoma, and osteosarcoma have also been published.2,3 The majority of the secondary tumours are carcinomas that arise in the lungs, breasts, large intestine, kidney, stomach, and nasopharynx.4
We are reporting this case to highlight the importance of FNAC as a tool in delineating the nature of thyroid swelling and to plan further management accordingly. Ancillary techniques can be applied on FNAC and give comparative results to tissue sections. It is important to use ancillary studies to differentiate between such tumours because the management and treatment modalities will vary accordingly. Radical surgery is considered mandatory in the treatment of metastatic soft tissue sarcomas especially if the tumour is localized as seen in our case.

A female patient of 86 years age presented with a right thyroid swelling. On examination, there was a diffuse, firm enlargement of the whole right lobe. Thyroid scan showed uniform faint increased uptake in the whole right lobe. The left lobe was normal. Ultrasound showed multiple hypo echoic solid nodules in the right lobe. CT scan revealed infiltrative solid tumour in the right lobe with features suggestive of malignancy of either primary or metastatic in origin.
This patient gave the history of a pelvic soft tissue tumour extending to the upper right thigh that was excised in 1998.
Fine needle aspiration was performed on the thyroid mass. The aspirate smears were stained by Diff Quick (DQ), Haematoxylin and Eosin (H&E) and Papanicolau (PAP) stain. Material was available for cell block preparation which was performed, sectioned and stained by H&E. A panel of Immunohistochemical stains was performed using antibodies for cytokeratin, vimentin, smooth muscle actin, S100 and thyroglobulin. Microscopically, the smears were hypercellular and showed spindle cell proliferation. The cells were arranged in sheets mixed with stroma. Marked pleomorphism was noted. The cells had large hyperchromatic nuclei (Figure-1). 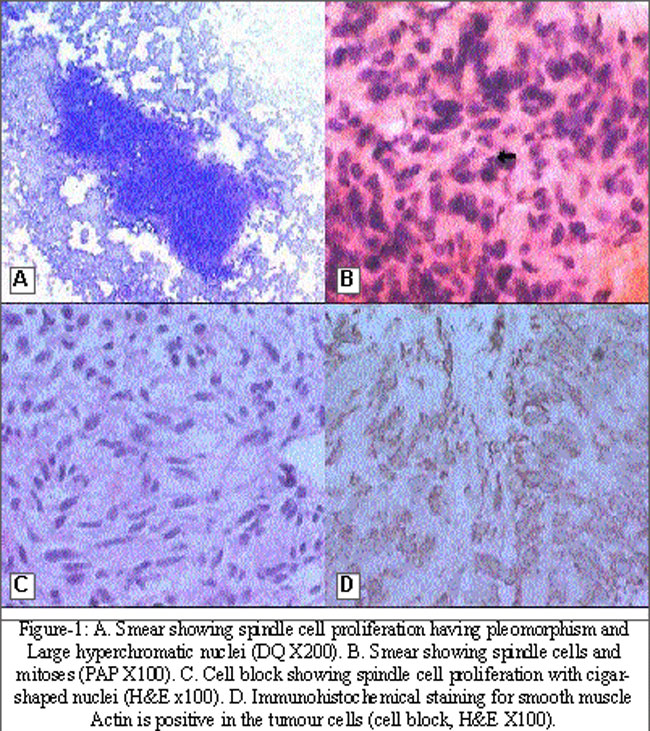 Mitoses was numerous. Cell block showed similar morphological features. The spindle cells were positive for Alpha smooth muscle actin and Vimentin. They were negative for Desmin, CD34, Cytokeratin AE1/AE3, Thyroglobulin and S100. A diagnosis of metastatic leiomyosarcoma was rendered.
Review of previous material on this patient revealed multiple excisions of pelvic soft tissue tumour since 1998 diagnosed as leiomyosarcoma.  The tumour had similar morphology to the thyroid tumour. The case was discussed in the tumour board meeting with recommendation of local excision of the thyroid tumour. Thyroid lobectomy was performed and gross examination showed multiple whitish nodules with haemorrhagic gelatinous cut surface. Leiomyosarcoma infiltrating between thyroid follicles was seen (Figure-2). 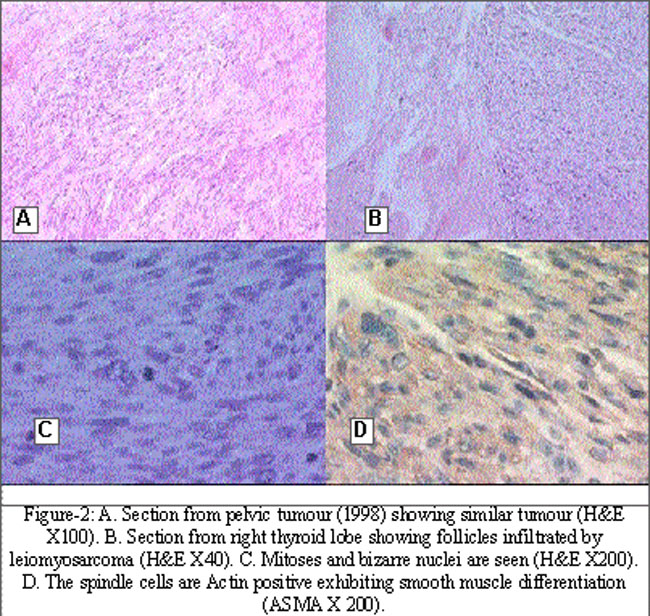 Mitoses was numerous with abnormal forms. The spindle cells were positive for Alpha smooth muscle actin. Staining for Desmin, CD 34, Cytokeratin AE1/AE3, Thyroglobulin and S100 was negative. Due to the patient\'s history of pelvic leiomyosarcoma, it was diagnosed to be a metastatic leiomyosarcoma from pelvic mass.
The patient was well post-operatively and discharged after one week with recommendation of follow-up with the Oncologist.

The thyroid gland is a known but unusual site for metastases from soft tissue sarcomas in particular. To the best of our knowledge 10 cases of metastatic leiomyosarcoma to the thyroid have been described in the medical literature and 5 are from the primary uterine leiomyosarcoma.1,3-11
Fine needle aspiration cytology is an important tool for diagnosis and planning further management in thyroid nodules in general and thyroid metastases in particular. Few cases of metastatic tumours diagnosed by FNAC have been reported in literature. Michelow et al9 described a case of uterine leimyosarcoma metastatic to thyroid diagnosed bt FNAC and Gatusso et al10 reported a case of retroperitoneal leiomyosarcoma involving sigmoid colon, left ureter, left fallopian tube, colon mesentery and metastasis to thyroid gland diagnosed by fine needle aspiration cytology.
Smooth muscle tumours of the thyroid are extremely rare. They can be of primary or metastatic origin. World Health Organization\'s histologic classification of thyroid tumours identifies the entity of smooth muscle tumours, which include leiomyoma and leiomyosarcoma. These tumours are exceedingly rare, only 5 cases of leiomyoma and 13 cases of leiomyosarcoma have been reported to date.11
Metastases in the thyroid were found in 9.5% of the patients who died of malignancy in other organs in one large series however; these metastases appeared as a clinically detectable thyroid abnormality in, 25% of cases.12 The incidence of metastatic spread to the thyroid in the autopsy literature ranged from 2% to 24%. Metastatic lesions in the thyroid gland could be single or multiple. In 54% of the cases, they were identified macroscopically.2
Diagnosis of a thyroid nodule as a metastatic lesion is not possible on clinical and radiological grounds. FNAC is an easy, simple and useful procedure. Ancillary techniques can be applied on FNAC material e.g. Immunohistochemistry (IHC), in-situ hybridization and electron microscopic studies. In this case, we were able to perform IHC on the cell block obtained by FNA and specific diagnosis of leiomyosarcoma was rendered based on the positivity for Alpha smooth muscle actin and vimentin and the negativity for cytokeratin and S100.
Leiomyosarcoma of the thyroid gland whether of primary metastatic origin should be distinguished from anaplastic carcinoma. Some authors believe that thyroid sarcomas are, in fact, anaplastic carcinomas with sarcomatous (spindle cell) features.  The clinical presentation of a rapidly growing infiltrative thyroid mass in an older patient is an important clue to the diagnosis of anaplastic carcinoma. According to a comparative study conducted by Kawahara et al,13 electron microscopic (EM) examination of leiomyosarcoma showed bundles of thin filaments with focal densities and discontinuous external lamina. In contrast, spindle cells of anaplastic carcinoma tend to lose epithelial connection, but sometimes show the features of follicular epithelium (i.e., numerous dense bodies, surface microvilli, and small lumina lined by microvilli).
The existence of primary thyroid sarcomas represents a contentious issue. From the standpoint of treatment and prognosis, the histogenesis of thyroid \'sarcomas\' is academic, because these tumours, irrespective of the therapeutic intervention, are lethal and when thyroid metastasis occurs, long-term survival has been reported to be dismal.

The authors are extremely thankful to Ms Johanna Javier for her technical assistance in manuscript preparation.

Esophageal Haemangioma: A case report and review of literature