The HIV epidemic in Pakistan

Pakistan\'s HIV epidemic is fully established and expanding among injection drug users (IDUs) of whom 20% are infected with HIV. Nascent epidemics are seen in some cities among Male sex workers and transgenders who form sexual contacts of IDUs. With involvement of sex workers, Pakistan appears to be following the "Asian Epidemic Model". On the other hand, nearly all patients in HIV clinics are expatriated migrant workers and their immediate relations. Almost all principle population sub-groups have at least some cases of HIV in most cities. While universally known risk of HIV transmission are present among sex workers, IDUs, a sub-group of men from the general population and other groups, epidemics among male sex workers have preceded those among female sex workers suggesting local nuances in sex behaviors. Universal male circumcision and limited contact between sex workers and IDUs may have slowed the initial progress of the epidemic thus far although that will change as the numbers of HIV-infected IDUs and their sexual contacts grows. The government runs HIV prevention programs for IDUs and sex workers in many cities, but must enhance the levels of coverage and quality of services provided. The slow early progression has provided a window of opportunity; it must not be allowed to close.

After a late start, the HIV epidemic in Pakistan is well established and expanding among injection drug users (IDUs) and their sexual contacts including male and transgender sex workers (MSWs),1-5 forming the core of the epidemic.6 Thus, Pakistan appears to be following the "Asian Epidemic Model."7 On the other hand, nearly all patients in HIV clinics are expatriated migrant workers, their spouses or children; and the infection has been diagnosed among nearly all demographic groups in the country. Extant individual injection drug use, sexual risk behaviours, poverty, economic instability, pervasive stigma and discrimination, low HIV awareness, illiteracy, extensive internal and external labour migration and porous borders expose and infect an increasing number of people with HIV.
Since 1987, over 4000 cases have been reported to the National AIDS Control Program, Ministry of Health (NACP). The NACP, WHO and the UNAIDS estimate that there may be 80,000 persons living with HIV,8 although actual data suggest about half that number.9 Until an outbreak among incarcerated IDUs in Larkana in 2003, there was little evidence of epidemic transmission of HIV in the country.10 National surveillance has since found increasing HIV prevalence among IDUs and MSWs in several cities (Figure). 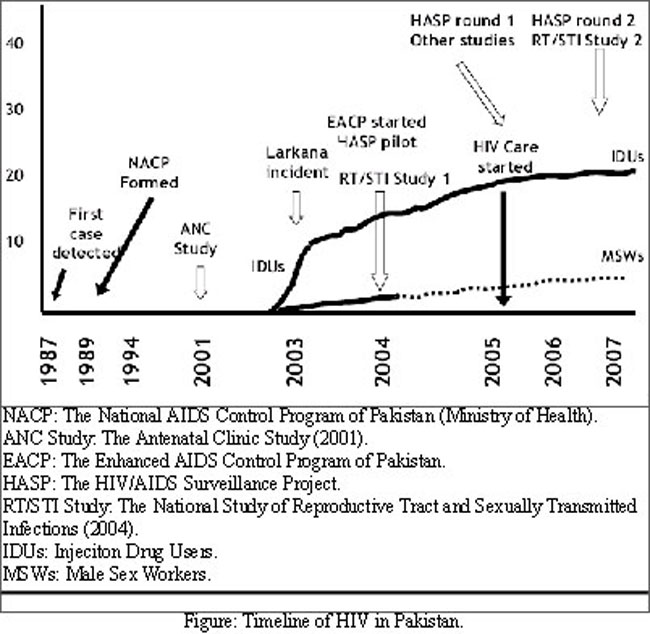 However, female sex workers (FSWs) and the general population remain largely unaffected by the epidemic so far. This review describes the risks, prevalence and transmission potential of HIV among various population subgroups and the national response to the epidemic in Pakistan.

A search of Medline® combining "Pakistan" and "HIV" yielded 185 references; of which only about half are directly about aspects of HIV in Pakistan. However, many of these are smaller studies with limited scope. Over 50 studies from grey literature and non-Medline journals are also available. We included only published and grey studies with an adequate sampling methodology, sample size >100 and relevance to the epidemic. This review relies principally on the reports of the national HIV surveillance2-5 and 4 large research studies11-16 commissioned by the NACP that combine to assess HIV risk and prevalence among over 50,000 IDUs, sex workers, men and women from the general population and truckers. Much of these data are unpublished but are reported at http://www.nacp.gov.pk/library/reports. Surveillance methodology is also described at http://www.nacp.gov.pk/library/publications. This review aims to make the rich data from these "grey publications" available in the scientific literature.
Finally, this review interprets the available data to explain Pakistan\'s HIV scenario in terms of the roles of different population sub-groups and contextual factors that may influence the epidemic progression.
The Epidemic among the Core Groups:
IDUs and MSWs2-5 are the main core group6,17 for HIV in Pakistan (Table-1). 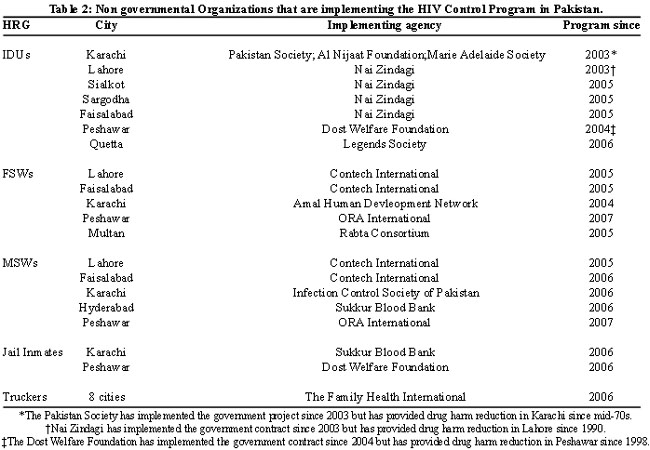 A quarter of these funds were used for prevention interventions for sex workers and injection drug users, 20% for a mass media campaign and 10% for surveillance.
The national surveillance shows that IDUs programs resulted in improved knowledge and injecting practices. Sex worker programmes had more modest results.2-4 Using coverage of interventions as a measure of effectiveness (since coverage depends upon syringe supply, outreach, effective counseling and behaviour change among IDUs46) a recent report showed that IDU programmes provide 35-80% coverage in the cities they operate in compared to <10% by sex workers programmes (Khan, World Bank 2008, unpublished). Low coverage was due to limited outreach and understanding by NGOs and government of which interventions to prioritize. Finally, while IDU coverage is high in individual cities, it equates with only about 36% coverage among the largest of cities and 20% for all of Pakistan. The national coverage was <5% for sex worker interventions.
Prevention programmes mainly provided social services, behaviour change counselling, condoms and syringes initially. Voluntary counselling and testing (VCT) for HRGs was added much later. Although it is now a part of all HIV prevention projects, only about 10,000 members of HRGs and 25,000 from the general population had been tested by July 2008. Referral linkages between these individuals and HIV care are evolving slowly. HIV care is being provided to over 2000 HIV+ individuals. Among these about 963 (NACP HIV Treatment and Care center data 2009) have AIDS and receive free antiretroviral medicines via 10 public and 3 private clinics. Despite initial successes, concerns remain about the quality of care rendered, as early analyses show around 10-17% annual treatment failure rates for antiretroviral therapy treated patients (Preliminary Data from HIV Treatment and Care centers NACP 2008).
It is possible to address programmatic concerns and improve the quality of services through in-depth analysis of surveillance data including interpretation of present trends and comparisons with other regional countries to better predict the future epidemic trajectory. Such analysis has been limited to date. Finally, bridging groups will also have to be addressed. For now, truckers are the only bridge group receiving services and surveillance data does not capture any bridge groups. Future research should also guide the content and extent of interventions needed for spouses of IDUs and sex workers, clients of sex workers, street youth, miners and other at risk groups.
Future of the Epidemic:
The HIV epidemic in Pakistan is well-established and expanding among IDUs, MSWs and expatriated migrant workers. HIV infections in MSWs preceded those among FSWs likely because of more efficient transmission through anal intercourse and the fact that although clients of MSWs while more limited, may have more interlinked and dense sexual networks. For the time being these factors may delay onward epidemic progression to the general population, which may be more at risk from the over-use of unwarranted therapeutic injections with used equipment than from sex. However once the epidemic reaches a critical threshold in FSWs and spouses of IDUs or sex workers it may spread to the general population. Almost all risk groups already have at least some cases of HIV in all cities. Overall, understanding and predicting the timing of when the epidemic crosses from one to another group will be very useful in timely placement of prevention programmes for maximum impact.
Considerable surveillance and program data are now available that should be analyzed for programme monitoring and design. This was done recently in the re-design of the government HIV prevention programme for 2009-13 and for measurement of the impact of interventions, but should be conducted routinely. However, once programme is designed, it is essential that all prevention programmes be monitored for effectiveness and that implementation be guided by evidence. The relative lack of involvement of the general population is a window of opportunity that must be utilized to prevent a generalized epidemic in Pakistan.