Frequency of ischaemic heart disease and stroke in hypertension

Hypertension, an abnormal elevation in blood pressure is not a discrete disease but an expression of a disturbance in integrative physiology. Its cause and pathogenesis is multi faceted and if left untreated, hypertension can involve the kidneys, heart, eyes, blood vessels or even brain resulting in cardiovascular diseases.1 Hypertension is the major risk factor for stroke and most other cardiovascular diseases. Globally, approximately two-thirds of stroke and one-half of ischaemic heart disease were attributable to non-optimal blood pressure.2 Although all measures of blood pressure are strongly and directly related to the risk of coronary artery disease and cerebrovascular accident, isolated systolic blood pressure is the best single predictor of cardiovascular events.3
According to the data from WHO and others, hypertension and cardiovascular accident (CVA) are an emerging health problem in the developing countries.4 It has been estimated that from 1990-2020, cerebrovascular mortality will be much higher in the developing countries as compared to the developed countries of the world.5 Worldwide, Indo-Asian people are among the populations at highest risk for cardiovascular disease.6 About 80% of the global cardiovascular disease burden is in the developing countries7 and due to economic advancement, progressive urbanization and aging population with greater lifestyle risk factors will further increase.8 Another reason for increased mortality in these countries is poverty because the poor are less likely to receive preventive care and are more likely to die from acute myocardial infarction and stroke.9
Hypertension is a main risk factor for heart disease and stroke in Pakistan10 which was the rationale to determine the frequency of ischaemic heart disease and stroke among hypertensive patients in this study.

Two hundred patients with systemic hypertension were included in the study. 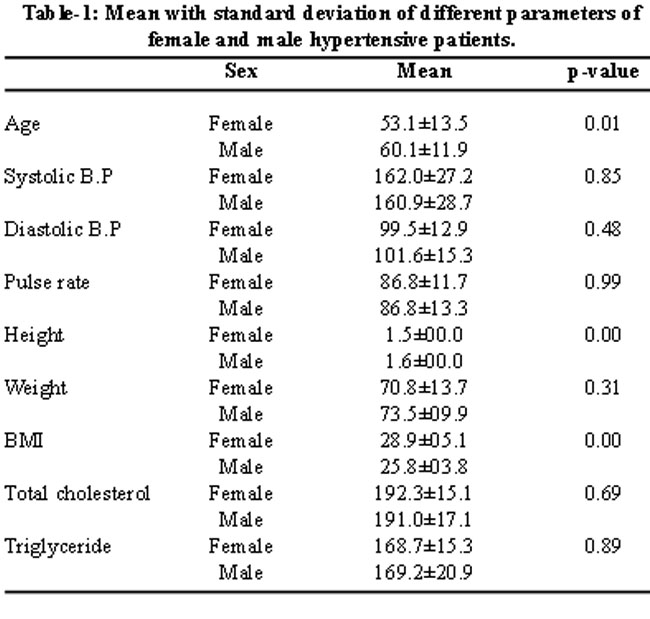 Table-2 shows the frequency of metabolic risk factor for cardiovascular disease in hypertensive patients. Obesity was more frequent in female hypertensives as compared to males while no significant difference was found regarding DM, hypercholesterolaemia and hypertriglyceridaemia.

Table-3 shows frequency of ischaemic heart disease and cerebrovascular disease (CVA) in female and male hypertensive patients. No significant difference was noted between the two genders.

This study was conducted at the outpatients department of Shahina Jamil Teaching Hospital of Frontier Medical College Abbottabad from June 2007 to December 2007.
Patients, who were more than 15 years of age, diagnosed as systemic hypertension, were included in the study. Patients younger than 15 years of age, and patients who were not willing for investigations for cardiovascular disease were excluded. Purposive type of sampling was used. Consent was taken from the patients to record the data that included age, sex, systolic and diastolic blood pressure, pulse rate, height and weight, BMI, serum total cholesterol, serum triglyceride level and history of ischaemic heart disease and CVA. All the data of included patients was recorded on a pre-designed performa. Hypertension was diagnosed on the basis of either previous history of hypertension and taking antihypertensive medication or newly diagnosed case on the basis of presence of average blood pressure of >140/90 mmHg. Blood pressure was taken as an average of 2 measurements taken after the participants were seated quietly with their backs supported without crossing their legs and with arms supported at heart level for 5 minutes. Blood pressure was measured by a doctor using a standard and regularly tested aneroid sphygmomanometer. Body mass index was calculated by using the Quetelet formula, weight (kg)/height (m2). Patients were considered of normal weight if BMI was 18.5-24.9 and overweight/obese if BMI was > 25. All patients were investigated for fasting serum cholesterol, and serum triglyceride using the chemistry analyzer MATROLAB 1600. High serum cholesterol was defined as total serum cholesterol level >200 mg/dL, high serum triglyceride was considered at >155 mg/dL. Patients were considered diabetic if they were already diagnosed and taking hypoglycaemic agents or diagnosed first time if the fasting blood sugar level was >126 mgm/dL or 2 hour post prandial blood sugar was >200 mgm/dL. Patients were considered to have ischaemic heart disease if they had either a documented record of old MI, coronary artery bypass graft surgery, coronary angioplasty, a positive stress test, and angiographic evidence of luminal narrowing of a major coronary artery or one of its primary branches or had recently attended the medical outpatient department with typical chest pain and diagnosed as a case of ischaemic heart disease on the basis of ECG changes, increased levels of cardiac enzymes, troponin T test, a positive stress test or angiography. Cerebrovascular accident (CVA) was diagnosed on the basis of history of focal neurological deficit and report of computed tomography scan of brain consistent with CVA or previous documented record of CVA. Patients were divided into two groups on the basis of gender to asses any statistically significant difference regarding the frequency of ischaemic heart disease and stroke among male and female hypertensives.
It was an analytical (cross-sectional) study. All the data was stored and analyzed by using statistical package for social sciences (SPSS) version 14. Independent-samples T-Test was used to compare the means of variables between two groups of hypertensive patients. Chi-square test was used to compare the parameters of the patients and differences were regarded significant when p-value was equal to or <0.05.

It is concluded from this study that ischaemic heart disease and cerebrovascular accident are more frequent in male hypertensives as compared to female hypertensives. Modifiable risk factors like obesity, hypercholesterolaemia, hypertriglyceridaemia and diabetes mellitus were assessed among both genders and had a significant correlation.
It is suggested that for the prevention of ischaemic heart disease and stroke, it is important to prevent and control hypertension. This will reduce the morbidity and mortality rates.