Experience with neoadjuvant chemotherapy in patients with breast cancer

Neoadjuvant chemotherapy has become the standard of care in patients with locally advanced and inflammatory breast cancer and is also now being considered for patients with operable breast cancer where breast conservation is planned.1-12 Neoadjuvant chemotherapy permits the study of in vivo sensitivity of tumour to treatment and improves survival in patients who achieve pathological complete response.1,10,13-16 Another advantage of neoadjuvant chemotherapy is its potential to portend breast conservation in patients with large tumours that would otherwise require mastectomy.1,2,5,7-10,16,17 Anthracyline based regimens constitute standard neoadjuvant treatment. Addition of taxanes to these regimens has shown to further increase the likelihood of clinical and pathological response rates.4,5,7,10,15,17,19 The objective of this study was to determine the clinical and pathological response rates to anthracycline containing regimens with or without taxanes in women with operable and inoperable breast cancer presenting to our institution.

Te electronic medical records of 161 women with operable and locally advanced breast cancer, registered at Shaukat Khanum Memorial Cancer Hospital between July 2006 and March 2008 were reviewed. All women were greater than 18 years of age and had histologically proven invasive breast carcinoma (T2-T4, N0-3, M0). The longest diameter of tumour was taken as tumour size. All patients had adequate renal, hepatic and cardiac function. Patients were excluded from the study if they had received treatment previously for breast cancer, had non invasive breast cancer or any malignancy other than breast cancer. The study patients were divided into two groups based on type of neoadjuvant chemotherapy received; Group A (Anthracycline based regimens: Adriamycin (A) 60 mg/m2 and cyclophosphamide (C) 600 mg/m2 intravenous (IV) every 21 days; 5 fluorouracil (FU) 500 mg/m2, Epirubicin (E) 100 mg/m2 and C 500 mg/m2 IV every 21 days; 5 FU 500 mg/m2, A 50 mg/m2 and C 500 mg/m2 IV every 21 days) and Group B (Anthracycline and Taxane based regimens: Docetaxel (D) 75 mg/m2, A 50 mg/m2 and C 500 mg/m2 IV every 21 days; A 60 mg/m2, C 600 mg/m2 followed by Paclitaxel (P) 175 mg/m2 IV every 14 days and every 21 days; 5 FU 500 mg/m2, A 50 mg/m2, C 500 mg/m2 followed by P 175 mg/m2 IV every 21 days; 5 FU 500 mg/m2, E 100 mg/m2, C 500 mg/m2 followed by D 100 mg/m2 IV every 21 days). After administration of planned chemotherapy, patients underwent surgery followed by radiation therapy. Tumour assessment using mammogram and sonography of breast and axilla was performed before starting neoadjuvant chemotherapy and before surgery.
The primary end point, pCR was defined as no microscopic evidence of residual viable tumour cells in all resected breast specimens and axillary lymph nodes. Pathological tumour response was graded according to Sinn et al14: regression grade 5 or pathological complete response = no microscopic evidence of residual viable tumour cells in all resected specimens of the breast and axillary nodes; regression grade 4 = no residual tumour in breast tissue but involved lymph nodes; regression grade 3 = only residual noninvasive tumour in breast tissue irrespective of lymph node involvement; regression grade 2 = focal invasive tumour measuring 5 mm or less and; regression grade 1 or 0 = no substantial effect of chemotherapy detectable.
Secondary end points included clinical tumour response rates in breast and axilla. Clinical complete response (CR) was defined as complete disappearance of tumour in the breast as was assessed by both palpation and imaging. Partial response (PR) was defined as reduction, by both palpation and imaging, in largest perpendicular diameter of tumour by at least 50% after completion of neoadjuvant chemotherapy. Progressive disease was defined as the development of new lesion or an increase in size of preexisting lesion by 25%. Stable disease was defined as no change in size of tumour. Axillary nodal response was defined as no evidence of enlarged axillary lymph nodes by palpation or imaging after completion of neoadjuvant chemotherapy in patients who had enlarged axillary lymph nodes at baseline.
Statistical analysis:
All data was entered in SPSS version 14. Chi square test was used to compare different variables. Two sided p values, odds ratios and corresponding 95% Confidence intervals were reported for primary and secondary end points; pathological complete response, clinical response rate (both by palpation & imaging) and breast conservation. P value of less than or equal to 0.05 was considered as statistically significant. Multivariate logistic regression model was used to determine probability of pCR as a function of various prognostic factors: age (< 45 vs. > 45 years); tumour size (larger v smaller than median maximum diameter); tumour grade (1 and 2 vs. 3); hormonal receptor status (positive vs. negative); Her-2/neu status (positive vs. negative), clinical nodal status (negative vs. positive) and treatment group (group A vs. group B).

The median age of the study population was 41 years (range, 20 - 73 years); 58.4 % of patients were premenopausal. Baseline characteristics of patients are shown in Table-1. 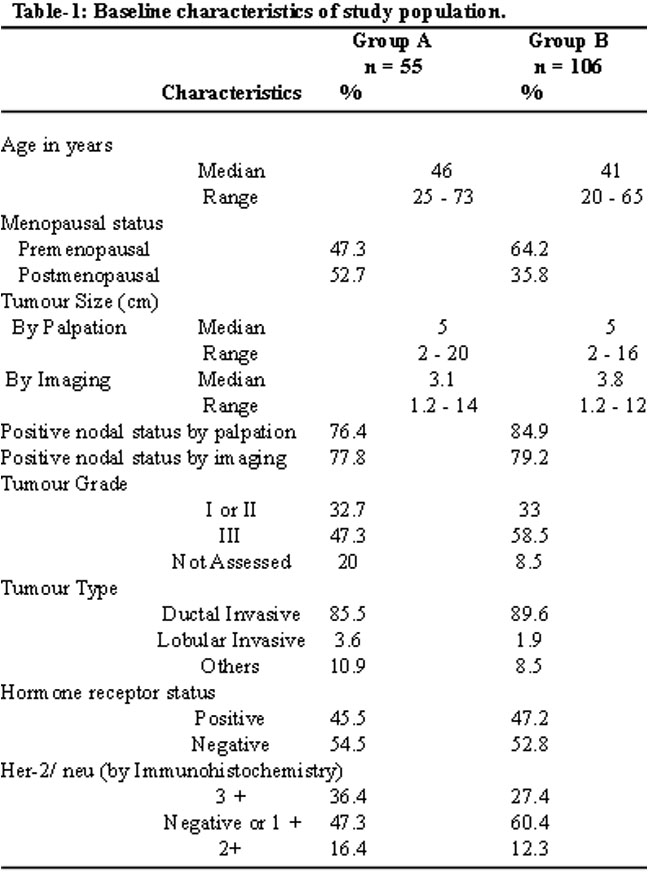 Median number of chemotherapy cycles administered in group A and B were 5 and 8, respectively. Pathological responses among 161 patients reviewed were as follows: 20 patients (12.4%) had pCR (grade 5 pCR) in resected specimens of both breast and axilla. There was no statistically significant difference in pCR rates between two treatment groups (p = 0.3, 95 % CI 0.57 - 4.8) as shown in Table-2.

Correlation between tumour response and survival after neoadjuvant chemotherapy in patients with breast cancer has been well documented.  In particular, pCR has been reported to be an independent predictor of disease free and overall survival in this patient population.1-12,16 Neoadjuvant taxanes either alone or in combination with other chemotherapeutic agents have shown high response rates in breast cancer.4,5,7,10,15,17-19 Similarly, addition of neoadjuvant taxanes in our patient population significantly improved complete pathological response rates on multivariate analysis.
NSABP-27 is one of the largest prospective studies, which compared a neoadjuvant anthracycline regimen with an anthracycline and taxane based combination.10 In this trial, the CCR, pCR and breast conservation rates in anthracycline based arm were 40%, 14% and 62% and in anthracycline and taxane based arm were 64%, 26% and 63% respectively. In our study CCR, pCR and breast conservation rates in anthracycline arm were 20%, 9.1% and 25% and in anthracycline and taxane combination arm were 39%, 14.2% and 36.7% respectively. Lower clinical and pathological response rates and hence lower breast conservation rates in our study were likely due to inclusion of higher stage breast cancer patients. In addition in NSABP-27, pCR was defined as no microscopic evidence of residual viable tumour cells in resected specimen of breast only while axillary nodal response was not included. In contrast, in our study pCR incorporates microscopic responses in both breast and axilla.
In NSABP-18 study, preoperative chemotherapy was compared with the same regimen administered postoperatively.16 In this trial, pCR rate in neoadjuvant anthracycline arm was reported at 13%.
In GEPARDUO study of the German breast group, the pCR in breast and axilla in three weekly anthracycline and taxane based chemotherapy arm was 14%, which is very much similar to that seen in group B of our study.11
In NSABP-27 study, both ER positive and ER negative tumours had an increase in pCR rates with the addition of taxanes to anthracyclines. However in our study, only hormone receptor negative tumours showed an increase in pCR rates from 10% to 21.4% by addition of taxanes. This observation is in concordance with multiple neoadjuvant chemotherapy studies indicating that ER negative tumours are more sensitive to chemotherapy than ER positive tumours.1,5,8,9,10,15,20
The improvement in tumour response rates may be at the cost of taxane related toxicities. However, in majority of patients the benefit of adding taxanes to neoadjuvant chemotherapy regimens may outweigh any associated risks.
In our study, multivariate analysis revealed higher tumour grade, negative axillary nodal status and addition of taxanes as significant predictors of attaining a pCR.
Our study was retrospective and the chemotherapy regimens used were heterogeneous with variable doses, number of cycles and schedules. Nevertheless, this study gives an insight into the clinical and pathological response rates in our breast cancer patients.