A 12 old year boy presented with complaints of high-grade fever and right upper quadrant pain, dating back to 2 weeks. On examination his temperature was 10 1°F and he had tenderness in the right hypochondrium. His total leukocyte count was 15,000 and the ESR was also raised. Rest of the examination and laboratory workup were unremarkable.
Imaging Finding
Ultrasound of upper abdomen revealed an 8.8x6.0 cm hypoechoic area with well-defined margins in right lobe of liver (Figure). 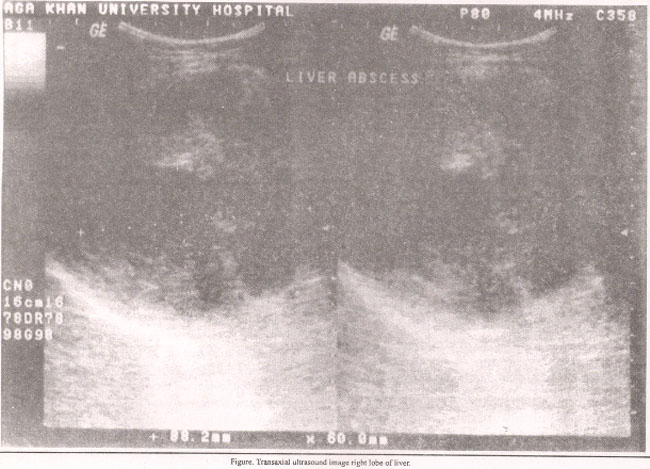 He was given a trial of antibiotics for four days but his symptoms did not improve. Under ultrasound guidance 150 ml of pus was aspirated from the lesion. Post aspiration size was 2.Ox1 .5 cm. Patient was discharged on oral antibiotics and had an uneventful recovery.
Diagnosis:Pyogenic Liver Abscess

Pyogenic liver abscess is a rare condition, with a reported prevalence at autopsy of 0.3% to 1.5%!. Worldwide, pyogenic liver abscess is much less common than amoebic abscess, although in Western countries the former is more common.
Pyogenic liver abscess is usually caused by Escherichia coli; however several other aerobic and anaerobic organisms can also lead to it. Most patients present with malaise, anorexia, nausea, weight loss, fever and abdominal pain. Pyogenic infection may be carried to the liver in hepatic arterial and venous blood or in bile. Other causes include infected hepatic cysts, liver trauma etc. No cause can be found for 50% of liver abscesses. They can be solitary, or multiple. When solitary they are most frequently seen in right lobe of liver. The differential diagnosis includes simple hepatic cyst, with hemorrhage, necrotic tumor, echinococcal cyst and hematoma. In our case the diagnosis of pyogenic abscess was suspected on basis of patients age, the clinical presentation and ultrasound findings, which was confirmed by laboratory test of aspirated pus.
In patients with liver abscess plain x-ray of abdomen may show elevation of right hemi diaphragm, small right-sided pleural effusion and an air fluid level below the diaphragm, due to air within the abscess cavity. On ultrasound, abscesses have a variable appearance2. They may be cystic with irregular indistinct wall, a well-defined wall,’ or less frequently an irregular wall. Abscesses may contain echogenic debris, fluid interfaces, or septations. In early cases they may appear hypoechoic and solid, usually with distal acoustic enhancement. They subsequently liquefy and become cystic and anechoic. Gas containing abscess may appear hyperechoic, usually with distal acoustic shadowing and reverberation artifacts3.
Computed tomographic appearance is variable and non-specific. One or more round or oval low-density lesions of size varying between 2-16 cm in diameter may be seen. The margins of the abscess may be smooth or nodular. On post contrast scanning an enhancing wall is common but not universal. Some times gas may be seen within the abscess.
No specific intensity pattern or morphology is seen on MRI. Most pyogenic abscesses have the following MR features: (i) Well defined margins, (ii) Round or oval sometimes with slight lobulations. (iii) Predominantly homogeneous, low intensity appearance with Ti-weighted sequences and (iv) Heterogeneous, higher signal intensity appearance with T2-weighted sequences.