Systemic lupus erythematosus is a multisystem disease with both genetic and environmental agents implicated in aetiopathogenesis1. SLE is a complex disorder affecting predominantly women. It is reported to be relatively common in Afro-Caribbean and Africans2. It is a chronic, usually life long and potentially fatal autoimmune disease characterised by unpredictable exacerbations and remissions3.
There is a predilection for involvement of joints, kidneys, skin, brain, serosa, lung, heart and the gastrointestinal tract4. Due to the risk of life threatening complications there is a need for close monitoring of the clinical and laboratory features. Expert care of patients with SLE will lead to fewer hospitalisations secondary to uncontrolled disease exacerbations. The disease is diagnosed primarily on the basis of history and clinical examination. Characteristic clinical manifestations serve as individual variables within sets of classification criteria for rheumatologic disorders. In addition, laboratory analyses are important and often needed to establish a confirmed diagnosis or prognosis5.
A large number of women attending the medical out patients Department (OPD), present with pains and aches. It is difficult to pick out patients with a suspicion of SLE in heavily attended medical OPDs in early stages of the disease. Most of the times investigations are also neglected due to cost factor or due to the simple non-availability of these facilities, This study was designed to document the common mode of presentation of SLE in Pakistani patients and to find out a cost effective set of laboratory investigations that would help in establishing an early diagnosis.

Patients who were referred for laboratory investigations with a suspicion of SLE/connective tissue disorder were selected for detailed evaluation. These patients were initially examined in medical outpatients of the three teaching hospitals in Rawalpindi and two teaching hospitals in Islamabad, with one having a dedicated rheumatology unit. The clinical and laboratory features were documented on a prescribed proforma by one of the investigators. All patients who fulfilled the 1982 revised American Rheumatism Association (ARA) criteria for the diagnosis of SLE were included in the study6.
The patients were interviewed and examined by one of the investigators, while the laboratory investigations were carried out in the Armed Forces Institute of Pathology (AFIP), Rawalpindi. These investigations included the complete blood count, erythrocyte sedimentation rate and the routine examination of urine. The serological tests done for these patients were the ANA (IF, indirect irnmunofluorescense, using rat liver as the substrate)7,8, anti-double stranded DNA antibody (IF, using Crithidia lucilae as the substrate)9 and the precipitating antibodies to extractable nuclear antigens (ENA), including Ro (SSA), La (SSB), RNP and Sm (countercurrent immunoeletrophoresis, using rabbit thymus and human spleen extracts as the antigen sources)10. Complement assays included the estimations of complement C3 and C4 (radial immunodiffusion)11.The rhematoid factor test (latex agglutination), VDRL (flocculation test) and the C reactive proteins tests (latex agglutination) were also performed.
Comparison of clinical and laboratory features was made between our patients and those studied by Tan EM. et al. subcommittee 1982. The total number of patients included by Tan EM et al in the study was n=17 7. Statistical method applied to find out any significant difference between our population and the control group was Chi square test.

A total of 50 patients, of the 914 referred, who fulfilled the ARA diagnostic criteria, were included in this study. There were 12 males (mean age 21.6 years, range 5-30 years) and 38 females (mean age 22.2 years, range 8-37 years) at presentation. Most of the patients belonged to the cities of Rawalpindi, Peshawar, Islamabad and adjoining areas situated in North of Pakistan (Rawalpindi 21, Peshawar 8, Islamabad 5, Kahuta 3, Mirpur 2, Kalar Syedan 2, DG Khan 2, Sargodha 2, Gujranwala 2, Hafizabad 1, Lahore 2).
There was a statistically significant difference in the incidence of arthritis, oral ulcers and hair loss (p value <0.034, <0.001 and 0.01 respectively) between our population and the control group. Haematological disorders and serositis were present with increased frequency in the control group as compared to our population, with a statistically significant difference between the two, p value <0.00l(Table 1). No significant differences were found among the immunological investigations between the twogroups as shown in Table 2. 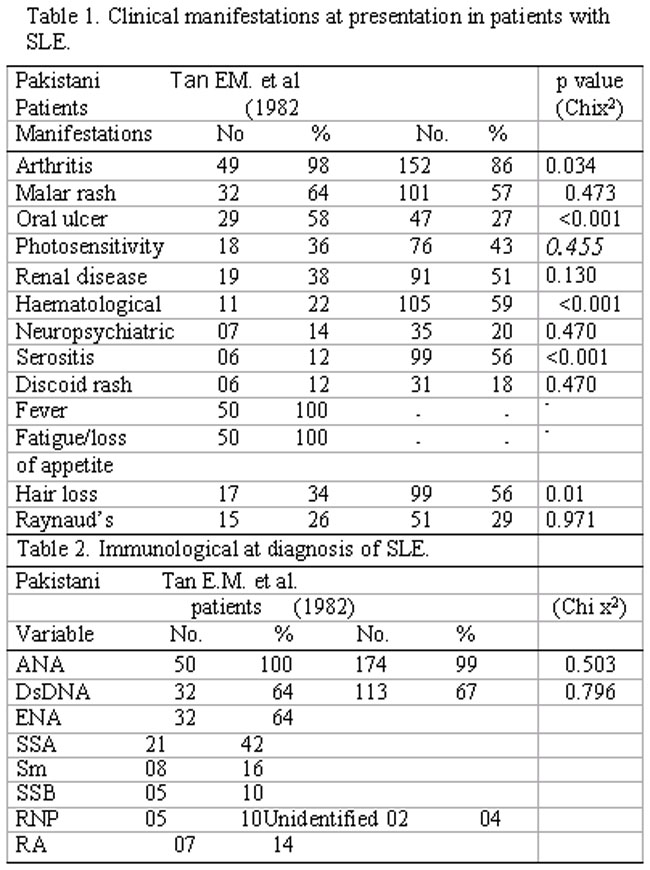 Other important laboratory fmdings included a raised ESR, decrease in both complement C3 and C4 levels and a disproportionately low (as compared to ESR) or normal C reactive protein levels (Table 3). 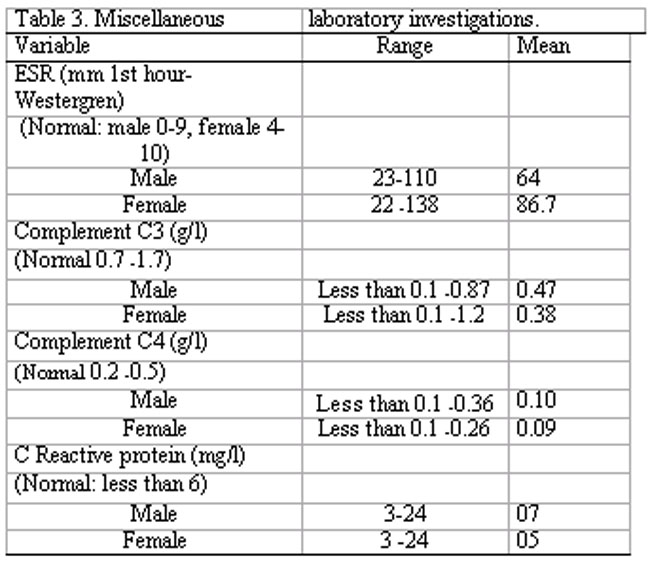 Objectives:To study the clinico-pathological features of systemic lupus erythematosus (SLE) in Pakistani patients at the time of presentation in the four teaching hospitals of Rawalpindi-Islamabad area.
Settings: Department of Immunology, Armed Forces Institute of Pathology (AFIP), Rawalpindi, Military Hospital (MH), Rawalpindi, Armed Forces Institute of Urology (AFIU), Rawalpindi, Combined Military Hospital (CMH), Rawalpindi, Department of Rheumatology, Pakistan Institute of Medical Sciences (PIMS), Islamabad.
Subjects: Patients suffering from SLE, diagnosed on the basis of the ARA criteria. Main outcome measures: Clinico-pathological features at the time of presentation.
Results:Twelve male patients in age range 5-30 years (mean 21.6 years) and 38 female patients in age range 8-37 years (mean 22.2 years) were included in the study, showing a female to male ratio of 3:1. Fever was the most common presenting feature (100%), followed by arthralgias/ arthritis (98%), malar rash (64%) and oral ulcers (58%). Laboratory results showed antinuclear antibody to be positive in all patients followed by anti double stranded DNA antibodies (anti DNA antibodies: 64%), anti extractable nuclear antigen antibodies (anti ENA antibodies: 64%) and evidence of complement consumption in 64% of the patients. Erythrocyte Sedimentation Rate (ESR) was found to be increased with a mean of 64 mm first hour fall in males and a mean of 87 mm first hour fall in the female patients. The C reactive protein was detected to be normal or marginally increased inspite of the increased ESR with mean of 7mg/I for male patients and 5 mg/I for the females.
Conclusion:The subject patient population presented almost universally with fever and arthralgias or arthritis in combination with malar rash or oral ulcers and in some patients a combination of all of the above was observed. A combination of positive anti nuclear antibody test, evidence for consumption of the complement in form of low C4 and C3, increased ESR and low C reactive protein were found to be a sensitive and cost effective set of laboratory findings for the diagnosis of patients suffering from SLE. The above mentioned set of clinical and laboratory features would help in the correct and early diagnosis of patients suffering from SLE, a relatively rare disease, in the busy medical out patient departments in our set up (JPMA 52:12, 2002).

Systemic lupus erythematosus (SLE) is encountered world wIde, with racial variations in incidence and prevalence. It is more common in Afro-Caribbeans and Africans2. The exact incidence and prevalence of SLE in Pakistani population is not known, but most of the patients presenting with SLE in our population were young. It affected females more than males and in our population female to male ratio was 3:1 in contrast to 8:1 reported in literature12.
There was no family history of SLE in any of the patient. The more frequency of SLE in males in our population may be due to excessive exposure to environmental factors such as UV light, since most patients belonged to poor social background and had to spend most of their time outdoors. On the other hand males have greater access to health care as compared to the females. Most of our patients presented with high grade fever of long duration i.e., 3-4 weeks associated with arthralgia/arthritis. Almost every patient presented with arthralgia which progressed to symmetrical arthritis involving small joints particularly hands and feet without morning stiffness. Prolonged fever in our population is usually and most of the times correctly managed as tuberculosis. This may lead to antituberculosis therapy being instituted in patients not suffering from tuberculosis. However, a careful analyses of the presenting features will help in making a correct decision in such situations. Similarly the possibility of drug induced lupus erythematosus after antituberculosis therapy was also kept in mind. Such patients were few (2 in five years) and not included in this prospective study.
Malar rash was the next most common presentation in our population followed by oral ulcers. Haematological manifestations and serositis were not found to be a usual mode of presentation in our population as compared to the control group. It may be due to racial differences or these may present as late manifestation in our population.
Among the laboratory features antinuclear antibody determination is most frequently utilised to screen patients suspected to be suffering from SLE13. It was found to be positive in all the patients with speckled pattern (66.6%) followed by homogenous pattern (20%) while peripheral pattern was the least common. Anti ds DNA antibodies were present in 32 (64%) of our patients. All of these patients were also positive for the ANA. Therefore the request for anti ds DNA antibodies should be made in patients with a positive ANA test to make it cost effective. In case of antinuclear antibody there are more than 30 nuclear antigen antibody specificities that have been identified14. Anti SSA antibody associated with photosensitivity15 was most frequently detected as also reported in another study9. Rheumatoid factor was present in 7 (14%) of our patients.
ESR is sometimes used to monitor the course of disease that are characterized by an inflammatory response16. It was found to be significantly increased in both males and females. Assessment of the C reactive protein levels has been advocated for the distinction between the flares of disease and infection in SLE17. In our patients increase in ESR was accompanied by a small or only a modest CRP response. The above mentioned fmding was accompanied by a significant reduction in both complement C3 and C4 levels.
To conclude, in our population any patient presenting with persistent fever, arthritis and malar rash or oral ulcers should be suspected of suffering from SLE. A combination of ANA, CRP, Complement C3, Complement C4 and ESR would provide suitable supportive laboratory evidence for establishing the diagnosis in a vast majority of these patients. The initial battery of investigations may be followed with assessment of anti ds DNA antibodies where available as this estimation may help in laboratory monitoring of the diseases activity for SLE. While anti extractable nuclear antibodies, anti cardiolipin antibodies and the lupus anticoagulant tests may be carried out in specific clinical situations.
It is emphasised that this study represents fmdings in patients belonging mostly to the northern part of the country. There is a need to carry out similar studies in other parts of the country to find out the truly representative spectrum of the presenting features in Pakistani patients.