Klebsiella pneumoniae is one of the most common gram negative bacteria encountered by the physicians worldwide as a cause of infections in humans.1 It was recognized initially as an etiological agent of pneumonia and urinary tract infection; however its epidemiology in the community had changed over the last 20 years with the emergence of virulent capsular serotypes.2 Today K. pneumoniae is associated with a wide spectrum of infections including a distinctive invasive K. pneumoniae syndrome.3 Despite gaining popularity as an emerging pathogen in the community the vast majority of K. pneumoniae infections are nosocomial and it is reported to be amongst the 10 most common nosocomial pathogens in various studies.1,4
This increased burden of K. pneumoniae infections is compounded by increase in Extended Spectrum Beta Lactamase (ESBL) producing isolates globally.5,6 ESBL are plasmid mediated enzymes that are able to hydrolyze a wide variety of penicillins and cephalosporins including third generation cephalosporins and monobactams. However the ESBL producing bacteria remain susceptible to cephamycins and carbapenems. These enzymes have been reported more frequently in E. coli and K. pneumoniae. Cross transmission of these ESBL producing bacteria in hospitalized settings have been implicated for nosocomial infections world wide. Incidence of ESBL in K. pneumoniae differ geographically and was reported as a part of MYSTIC study (1997-2003) to be 12.3% for North America, 51.9% for South America, 16.7% for Northern Europe, 24.4% for Southern Europe, 58.7% for Eastern Europe and 28.2% for Asia Pacific region.5 In addition emergence of carbapenem resistance due to metallobatelactamse enzyme production in K. pneumoniae is being reported worldwide.7 The main concerns with ESBL are limited treatment options, resistance to multiple classes of antimicrobials leading to multidrug resistant ESBL phenotype (MDR ESBL), increased mortality and cost of management.8
In Pakistan ESBL production in K. pneumoniae has been reported from different centers,9,10 however changing trends of resistance in K. pneumoniae particularly ESBL phenotype and MDR ESBL over period of time has not been determined. Of more concern is the emergence of carbapenem resistant isolates at our center. Carbapenem resistant K. pneumoniae has not yet been reported from Pakistan; to the best of our knowledge this is the first report, documenting changing trends of ESBL producing K. pneumoniae isolates and emergence of carbapenem resistance in these strains from Karachi, Pakistan.

Setting: This descriptive study (January 2002 to 2007) was conducted at The Aga Khan University Hospital (AKUH), a 550 bedded tertiary care centre located in Karachi. The hospital and its clinical laboratory are accredited with Joint Commission of International Accreditation (JCIA). The laboratory has been participating in external quality control surveys with College of American Pathologists (CAP) since 1992. Clinical microbiology laboratory provides services to inpatients and patients from other hospitals, clinics and in the community. Moreover the clinical laboratory of AKUH has a unique system of national network of collection centers located in more than 50 major cities and towns of all four provinces of Pakistan. This extensive networking makes our laboratory data representative of strains prevalent across the country.
Specimen Selection: All clinical samples yielding growth of K. pneumoniae were selected. Data retrieved from centralized database included: identification, age, sex and location (inpatient or outpatient), year and month of isolation, specimen type, city from which specimen was received and susceptibility pattern. Duplicate specimens from same patients were excluded. Methodology of identification, susceptibility testing and quality control of the organism remained similar throughout the study period.
Microbiological Methods: All clinical samples were processed and isolated according to the standard microbiological methods.11 Isolates were identified biochemically using conventional tests as per protocol.11 Isolates from blood and other sterile body sites were identified using API 20E (Bio Merieux France).
Antimicrobial susceptibility test:
Antimicrobial susceptibility testing was performed by Kirby Bauer method as per Clinical Laboratory Standards Institute (CLSI).12 Antimicrobial discs tested were ampicillin (10µg), amoxicillin-clavulanic acid (20/10µg), piperacillin-tazobactam (100/10µg), ceftriaxone (30 µg), aztreonam (30 µg), gentamicin (10 µg), amikacin (30 µg), ofloxacin (5 µg), trimethoprim-sulfamethoxazole (1.25/23.75 µg), and imipenem (10 µg). ESBL production was detected by combined disc method (ceftriaxone alone and ceftriaxone-clavulanic acid) using the same standard.12 E.coli ATCC 25922 and K. pneumoniae ATCC 700603 were used as the quality control strain. MDR ESBL were those ESBL positive K. pneumoniae that were also resistant (co-resistance) to aminoglycosides, fluoroquinolones and cotrimoxazole.
Statistical Analysis:
Descriptive analysis was done by calculating frequencies and percentages. Chi-square test was used with appropriate correction for the observation. Fisher exact test was applied to see the significance of difference between the resistance levels of various drugs in ESBL producer strains and non ESBL producer strains. All analysis was done on SPSS version 16. P < 0.05 was considered significant. 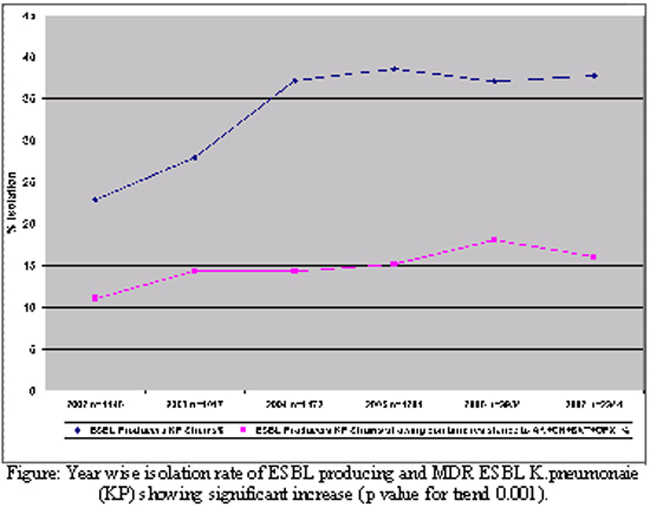 Similarly isolation of MDR ESBL followed the same trend (p=<0.0001) (Figure). Isolates resistant to carbapenem were first isolated in 2004. 0.4% (n=23) of ESBL positive isolates detected through out study period were found resistant to carbapenem. 47.8% (n=11) of carbapenem resistant ESBL positive isolates were yielded from patients treated in intensive care units.
Demographic details of ESBL phenotype of Klebsiella pneumoniae:
Age <10 years as opposed to other age groups was significantly associated with isolation of ESBL positive K. pneumoniae (Table-1). Further stratification of this age group, identified neonates as the most commonly affected. Similarly males and isolates from blood were significantly associated with ESBL phenotype (Table-1). 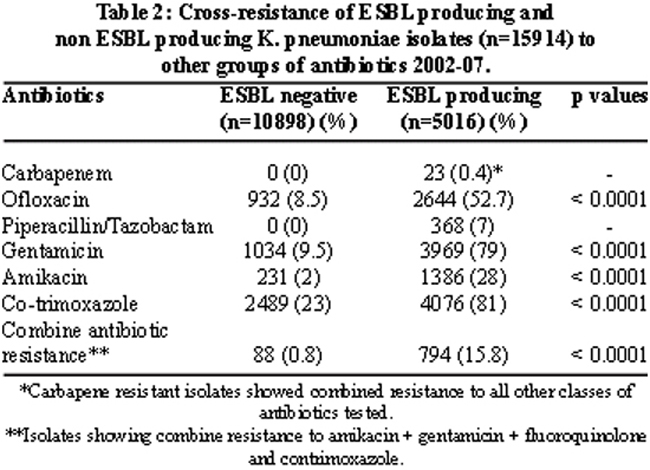 K. pneumoniae is an important pathogen responsible for serious infections in both community and hospitalized settings. Urinary tract was the most common site of infections followed by bacteraemia in our study. Our findings are consistent with other studies reporting K. pneumoniae to be responsible for 6 to 17% of all hospital acquired urinary tract infections and 4-15% of blood stream infections.1
Globally increasing resistance trends to multiple antibiotics in K. pneumoniae have complicated the management of these infections. We also noted an increased resistance to the commonly used antibiotics against K. pneumoniae infections. More concerning was the emergence and increase in the isolation rates of ESBL producing K. pneumoniae over the years. Studies from both developed and developing countries have reported an increasing trend in the isolation of ESBL positive K. pneumoniae.13-15 We found significant increased isolation of ESBL positive K. pneumoniae in age less than 10 years, males and blood isolates.
Interestingly when age as a risk factor was further analyzed we observed that K. pneumoniae isolates from neonates and children less than 1 years of age had significantly high isolation rate of ESBL production. Various studies have reported increased isolation and increased rates of nosocomial infections with ESBL producing K. pneumoniae in their neonatal and paediatric patients both from developed and developing countries.16-18 Our institution has observed intermittent out breaks of infections with ESBL producing K.pneumoniae isolates in its neonatal intensive care unit and paediatric wards over the study period and increased isolation of ESBL positive isolates in our study could be related to this fact. Whether these isolates are epidemiologically related and whether ESBL K. pneumoniae has become endemic pathogen in our hospital, remains to be studied. Age greater than 60 years has been reported as common risk factor for ESBL K. pneumoniae infections, but we did not find this association statistically significant in our study sample.19,20
Increased ESBL production was seen in males as compared to females in our study. Male gender as a risk factor for ESBL production has been reported in literature however the reason for this association is not discussed in much detail.21 We hypothesize that males in general have more obstructive uropathies leading to frequent urinary catheterization and have more chronic pulmonary and cardiovascular diseases that in turn lead to increased hospitalization and hence increase ESBL
Bacteraemic isolates in our study were more likely to be associated with ESBL production as opposed to non bacteraemic isolates. This finding was unusual as studies have reported non bacteraemic isolates to be more frequently associated with ESBL production.22,23 However globally blood stream infections caused by ESBL producing strains of enterobacteriaceae is on the increase that has serious implications on mortality rates and overall cost of management of these infections especially in developing countries like Pakistan.21
ESBL positive strains of K. pneumoniae were found to be significantly more resistant to aminoglycosides, quinolone and cotrimoxazole as opposed to ESBL negative strains as reported previously.1,8,24 The prevalence of these multidrug resistant ESBL (MDR ESBL) strains of K. pneumoniae is also reported to be on the rise.25 K. pneumoniae as an infecting organism has been identified as an independent risk factor for these MDR ESBL strains.25 This multidrug resistance is due to simultaneous transmission of ESBL gene with plasmids that encode resistance to aminoglycosides, quinolones and trimethoprim sulfmethoxazole.8
Owing to increased prevalence of the MDR ESBL internationally reliance on carbapenem has led to emergence of carbapenem resistance.10 One of the alarming finding of our study was the emergence of extensively resistant ESBL producing K. pneumoniae isolates resistant to all other antibiotics effective for treatment including carbapenem, ciprofloxacin, aminoglycosides and piperacillin-tazobactam. These isolates were sensitive only to colistin and polymixin. Susceptibility of these extensive resistant isolates with tigecycline, a newer glycylcycline, now recommended as option for the management of infections with carbapenem resistant strains needs to be evaluated in our setup.10 Extensive resistant strains of K. pneumoniae started to emerge in year 2004 in our hospital, although not statistically significant in the current study, an overall increase in their isolation rate is noted in recent years. This poses a great challenge to our clinicians owing to their difficult and complicated management.
Our study data have certain limitations. Firstly the data presented here were not collected in a programmed survey of drug resistance but obtained as part of routine analysis of specimens submitted to the laboratory therefore is subjected to sampling bias. Secondly due to non availability of the history we were not able to differentiate our strains to community and nosocomial strains. Thirdly treatment history of the patient was not available therefore we were not able to associate resistance with antibiotics used. Nevertheless, despite these limitations this is the first study from Pakistan reporting ESBL trends over years on a large number of K. pneumoniae isolates. We are also first to report the emergence of carbapenem resistance in K. pneumoniae isolates from Pakistan.

Increasing prevalence of ESBL producing isolates of K.pneumoniae and emergence of extensively resistant isolates with resistance to all second line antibiotics is a call for concern and mandates strict adherence to antibiotic selection and restriction policies in community and hospitals in Pakistan.