Objective: To check the reliability of the commonly used neurological scoring systems taking the nerve conduction studies as the reference.
Methods: Diagnosed diabetics (n=60) were selected by purposive sampling. Detection and grading of neuropathy were done according to Diabetic Neuropathy Symptom Score (DNS), modified Neuropathy Symptom Score (NSS), Diabetic Neuropathy Examination (DNE) and modified Neuropathy Disability Score (NDS). For the nerve conduction studies, amplitudes, velocities and latencies of minimum two (Sural, Peroneal) and maximum six i.e. three sensory (Sural, Ulnar, Median) and three motor (Peroneal, Ulnar, Tibial) nerves were checked. If the patient had 2 or more than two abnormal findings in any of the nerve he was labeled to have peripheral sensorimotor neuropathy. Later the sensitivity, specificity and diagnostic efficacy of each neurological score was checked taking nerve conduction studies as the gold standard.
Results: Taking the NCS as gold standard DNS, DNE, NSS and NDS had 64.1%, 17.95%, 82.05%, 92.31% sensitivity and 80.95%, 100%, 66.67%, 47.62% specificity, respectively. Diagnostic efficacy of DNS was 70%, DNE was 47%, NSS was 77% and NDS was 77%.
Conclusions: Combining different scores gives better sensitivity and specificity. NDS is the most reliable neurological test for detecting and grading DPN (JPMA 60:166; 2010).

Normal glucose levels are important not only for energy but for many other functions including adequate nerve conduction.1 The disease process of diabetes causes alterations in the normal nerve functions which can be reflected either when performing neurological examination or during electrophysiological testing of the patient. The neurological scores and the electrophysiological studies both are used for the diagnosis of the sensorimotor neuropathy. The relations between physiology and pathophysiology emphasize the close interdependence between electrophysiological studies and clinical findings.2
The neuropathies are among the most common of the long-term complications of diabetes, affecting up to 50% of patients in the world.3 The prevalence of neuropathy in type 2 diabetics is about 40% in some areas of Pakistan and it is likely to increase more than twice between years 2000-2030.4,5 Pakistan is among the countries where ratio of previously undiagnosed to known diabetes is 2:1.6
The electrodiagnostic evaluation of diabetic polyneuropathy has been done in our set up but still there is a need to formulate a standard protocol for diagnosing the disease at early stage. In recent years different protocols have been developed to establish minimum criteria for the detection of diabetic neuropathy and criteria for its staging.7 The nerve conduction studies can be used to evaluate the different neurological scores being used for diagnosing diabetic polyneuropathy. The screening of patients can be done to assess the sensitivity and specificity of the selected neurological scores.8,9 Recent criteria regarding nerve conduction studies for clinical research of distal symmetric polyneuropathy can be followed.10
We chose to select the four neurological scoring systems which are common, easy to perform and we checked them against NCS which also has similar advantages. The aim was to devise scores which are practical to diagnose and grade neuropathy.
Earlier detection will help the physician in learning the pattern of pathophysiology of disease progression at different stages and will facilitate the patient in improving towards a better life style.

This comparative cross-sectional study was performed at Islamic International Medical College (IIMC) in collaboration with Combined Military Hospital (CMH) and Armed Forces Institute of Rehabilitative Medicine (AFIRM), both in Rawalpindi. The study was started in January 2006 and was completed in one year. All the diabetic patients were collected from the outpatient department of CMH, Rawalpindi. On arrival of the patient the details of study was explained and written informed consent was obtained.
Total 70 diagnosed type 2 diabetic patients, who fulfilled the selection criteria given below, were included in the study. Non-probability purposive sampling was used to select the patients. To include the patients they had to be diagnosed type 2 diabetics, between 25- 61 years (male or female) with duration of known diabetes greater than one year and had intact sites to be tested. All those patients were excluded from the study that had any other type of neuropathy diagnosed or suspected, acute or chronic musculoskeletal disorder, poor compliance or pregnancy. The patients on drugs that may improve, mask or aggravate the normal course of neuropathy were also excluded or were recalled with instructions to stop the drug for two weeks if possible. Ten patients dropped out later leaving 60 patients with complete data.
Neurological Examination Scores: We selected four scores on the basis of ease of performance and common use. The scores were Diabetic Neuropathy Symptom (DNS), Diabetic Neuropathy Examination (DNE), modified Neuropathy Symptom Score (NSS) and modified Neuropathy Disability Score (NDS).10,11 All the patients were graded on the basis of the each of the above scores. DNS had maximum 4 points and DNE had maximum 16 points. In the other two scores NSS had maximum 9 points and NDS had maximum 10 points. The patients were labeled to have neuropathy if DNS, NSS and NDS were > 1 and if DNE was >3.
Nerve Conduction Studies: The nerve conduction studies were used to identify normal or deranged. The patients were labeled to have polyneuropathy if value of two or more than two parameters were abnormal in one nerve or one parameter was abnormal in any two nerves.
The studies were done at room temperature of 23 ± 2 °C. For all studies, the machine used was Keypoint Work Station (Medtronic, France). The simplified nerve conduction studies (NCS) protocol was followed to record the nerve conduction studies of the patients.12
All data was recorded on a pre-designed questionnaire proforma. For each neurological score patients were divided into four groups a, b, c and d. If neuropathy was present by both clinical examination and NCS the patient was placed in group a (true positive), in group b (false positive) it was present on clinical examination but was absent on NCS, in group c (false negative) it was present on NCS but was absent on clinical examination and in group d (true negative) it was absent on both testing methods. Sensitivity and specificity of each score was calculated taking nerve conduction studies as the gold standard. The data were entered in a 2x2 table (Table-1). 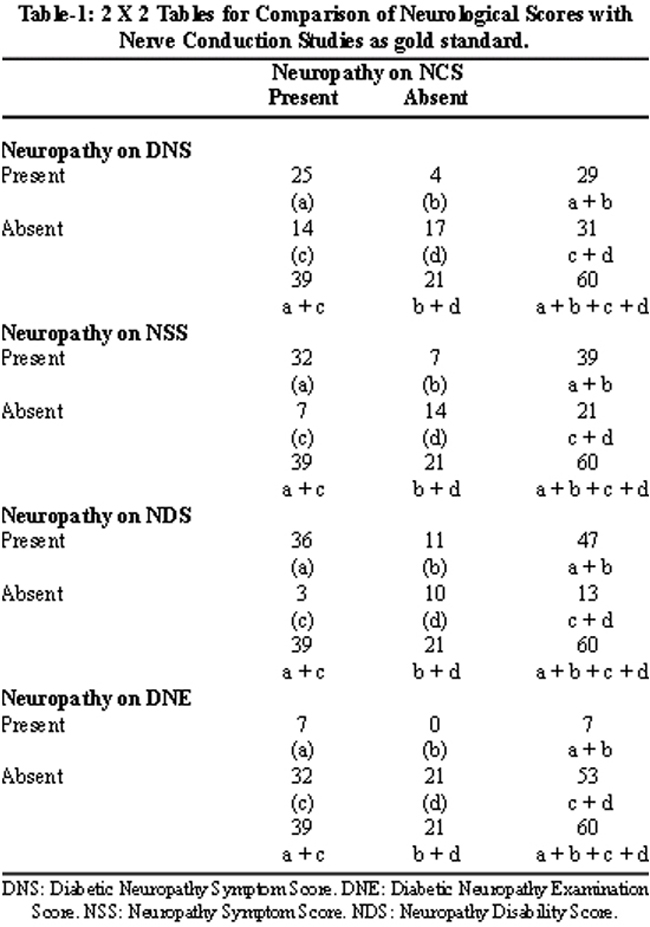 (column-2). Diagnositic Efficacy (Last row of Table 2) of each test was derived from the same data.

The reliability of the neurological scores (DNS, DNE, NSS and NDS) was assessed by measuring their sensitivity and specificity taking the nerve conduction studies as gold standard. Other diagnostic parameters of the tests were assessed including diagnostic efficacy of each test. These results are shown in Table-1 and Table-2.
NDS was found to be the most sensitive test and DME had the highest specificity. NDS and NSS had a better diagnostic efficacy. 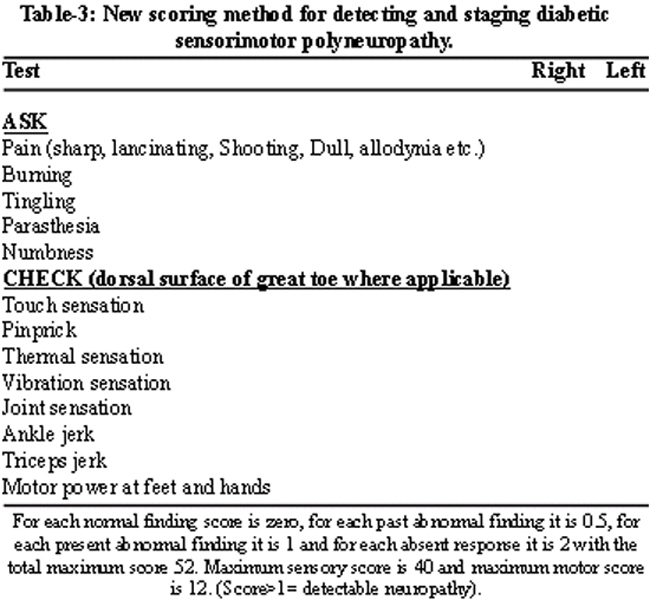 Its applicability should be assessed against NCS and correlation should be checked as well in further studies.