Objective: To explore personality traits considered to be important in selection of trainees by consultant anaesthetists in a developing country.
Methods: A questionnaire listing 28 traits was sent to 125 consultant anaesthetists. The raters were asked to mark each trait on a scale of 1 to 10, with one being least desirable and 10 as most desirable. Listing of five most desirable and one least desirable trait was also required.
Results: The response rate was 79%. The most desirable trait was identified as reliability by 40%, followed by honesty 17%, functionality under stress 9%, punctuality 7%, and discipline 4%. The least desirable trait was considered as resourcefulness (21%), sense of humour (20%), unassuming mannerism (15%), high self esteem (11%), inquisitive (5%) and expedious (5%).
Conclusion: Some traits have been identified as more desirable than others for trainees in our country. We plan to assess these in structured behavioural interviews in our residency programme (JPMA 60:162; 2010).

Certain behavioural competencies are important for effective job performance by trainees during residency programmes.11 These competencies vary from specialty to specialty and are dependent on personality traits. Identification of desirable personality traits in anaesthesia has potential implications in selection of trainees and their coping of strategies in times of stress.2 Significant personality trait variations may be observed in anaesthetists from different cultures and therefore there is a need to study this variation. A computer based literature search rendered very few publications related to anaesthesia on this particular topic.
The aim of this survey was to explore a cluster of traits which were considered important in anaesthesia trainees by consultant anaesthetists working in a developing country in South Asian region. It is hoped that identification of the more desirable traits by faculty consensus would provide the database for developing an appropriate instrument for assessment of the same characteristics at the time of selection and throughout the residency programme.

A questionnaire was designed which listed 28 personality traits (Annexure 1). As there is no existing uptodate national database of practicing consultants available in the country, forms were distributed to consultants attending two major anaesthesia meetings in the country in 2006/2007. These were the annual meetings of the Pakistan Society of Anaesthesia in Lahore and Karachi. In addition, a database of all teaching anaesthesia departments in the country was created and the forms were sent by email or a single mail to anaesthesia consultants/faculty working there. A return self addressed envelope was enclosed. The form was accompanied with a covering letter outlining the purpose of study. Non responders were sent the questionnaire again. The forms were distributed to a total of 125 consultant anaesthetists. The raters were asked to mark the desirability of each trait that they would require in their anaesthesia trainee on a scale of 1-10 with 1 being least desirable and 10 as most desirable. They were also asked to list the five traits that they felt were more important for their anaesthesia trainee to have and rank them in order and also identify the trait that they felt was the least important. Details of postgraduate qualification and the experience in the specialty of each trainer were also documented. Scores 1 or 2 were translated to strongly disagree, 3 and 4 to disagree, 5 to ambivalent, 6 and 7 to agree and 8, 9, 10 to strongly agree.
The answers provided on the returned questionnaires were transcribed onto SPSS (Statistical Package of Social Sciences version 13.0) for analysis.
The ethical issues involved in this survey were those inherent to survey methodology in general. A generic consent was asked for in the covering note. Confidentiality was respected and the respondents were not asked to give personal details. The filled data forms did not identify individuals and were kept in a safe place. The non responders were not contacted if the second communication was not answered.
Statistical Analysis:
Frequencies of background characteristics including current rank, current institution of practice, educational qualification, current involvement, and level of training residents, supervisory role and less important personality traits were obtained. Cross tabulations of ranking of most important personality trait by type of personality traits was generated. Descriptive statistics including mean, standard deviation and percentiles (5th, 25th, median, 75th and 95th) of trait scores for different personality traits were also reported. Descriptive statistics including mean, standard deviation and percentiles (5th, 25th, median, 75th and 95th) were also generated for experience in anaesthesia and after post graduation. Independent sample t-test was used to compare the difference in average trait scores by experience (<5 years and 5 years & above) for different personality traits. A p-value of <0.05 was treated as significant.

Ninety nine forms were returned out of 125 sent. The overall response rate was 79%. None of the forms were discarded and all were suitable for analysis.
Forty percent of the responders listed reliability the "most desirable trait" followed by honesty which was listed by 17%. Functionality under stress, punctuality and being disciplined was listed by 9, 7 and 4%.
The five most desirable traits which emerged from ranking in this study were reliability (72%), honesty (45%), functionality under stress (34%), punctuality (33%) and admitting errors (30%) (Table-1).

Setting priorities, consistency, meticulousness, resourcefulness, rapport building, inquisitiveness, expediousness, politeness, high self esteem, neatness, candor, sense of humour, and unassuming manner got a response rate of less than 10%.
The least desirable traits marked by the respondents were resourcefulness (21%), sense of humour (20%), unassuming mannerism (15%), and high self esteem (11%). Being inquisitive (5%), and expedious (5%) shared the fifth rank (Table-2). 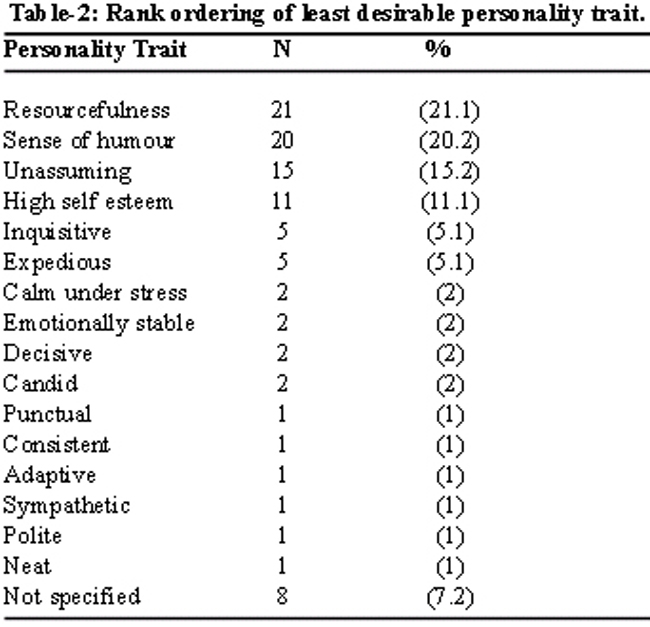 The complete list with mean scores and dispersion values is given in (Table-3). 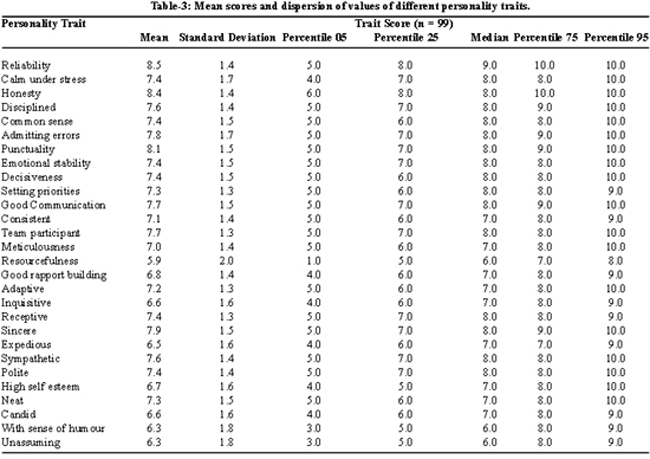 The assessments of non-cognitive traits have been overlooked by medical educators. These traits are known to affect performance during residency training particularly stress tolerance, communication and peer relationship.3 Personality is defined as a byproduct of environmental influences occurring in infancy and adolescence and is layered on temperament.4 Certain elements of personality have also been linked to one\'s ability to cope in specific work environments.4 Personality traits have been used in the aviation industry to separate a group of pilots who were more accident prone than their peers.5 The relationship of personality and stress has also been implicated in anaesthesia incidents but formal appraisal and evaluation is still lacking.2 A widely accepted method for identification of behavioural competencies is job analysis by the critical incident technique.6,7 This method has been used to determine the specific behavioural competencies for several residency programmes including anaesthesia.8,9
Anaesthesia as a specialty is considered to be associated with high level of stress. Time management and organizational factors have been rated higher in causing stress compared to clinical work.10 Provision of clinical anaesthesia was the most satisfying and least stressful part of the job. The changing work environment and increased involvement of anaesthetist in out of operating room activities may contribute further to job stresses.10
The personality makeup of an anaesthetist has been shown to be significantly different from the general population and other physician colleagues.11 In a study by Kluger et al11 the majority of consultant anaesthetists were identified as being mature, strong, responsible, reliable, resourceful, socially tolerant, empathic, helpful, compassionate, constructive, ethical and individuals with principles. The specialist anaesthetists were also more cooperative, harm avoidant and self directed than the community. Anaesthetists in this study were also described as privacy seeking, self effacing, modest and dispassionate.
Psychometric testing has been used in job recruitment outside anaesthesia.12 Anaesthetists who are involved in the recruitment of trainees and specialists consider the inclusion of personality testing as a potentially useful tool to select the most suitable applicant.13 Some personality assessment is possible at a formal structured interview but personality testing on its own has a validity of only 0.38 where one is a perfect match.14 Ideally it should be combined with other methods of assessment.13
Cultural makeup and geographical variability can influence the use of personality characteristics as well. In a study from New Zealand anaesthetists indicated a bias towards orderliness, compassion and independence compared to a Scottish group.13 These differences prompted our investigation into the desirable personality characteristics of anaesthesia trainees in a developing country. In such countries the resource constraints and the challenges of working as an anaesthetist can be quite different from those in more affluent societies.15 We used a simple list of twenty eight adjectives related to personality and asked the responders to mark them on a scale of one to ten. The reason for choosing this methodology was the familiarity of anaesthetists as a group with the scale used for measurements in anaesthesia, e.g. like anxiety and pain. One of the limitations of this survey is that the questionnaire did not undergo any validation which may have addressed concerns of interpreting the different elements by the responders.
According to our survey the traits considered important in trainees by educators in anaesthesia in our country are reliability, honesty, ability to remain calm under stress, punctuality, and discipline. It is possible to explore these characteristics further by personality tests and structured interviews at the time of selection. Temperament can be assessed by various instruments like the Barclay\'s adjective checklist or Strelau Temperament Inventory.16
Two structured interview formats used for assessment of non cognitive skills are currently in use in healthcare. These are the behavioural interviews in USA17 and multiple mini interviews in Canada (MMI).18 The MMI has been shown to possess high reliability, accuracy and predictive validity.19 In accordance with our resources it would be worthwhile to assess the reliability, accuracy and predictive validity of a structured behavioural interview based on the traits identified.

Reliability, honesty and stress handling were the three most desirable personality traits identified for anaesthesia trainees in this survey. In accordance with our resources it would be worthwhile to assess the reliability, accuracy and predictive validity of these traits in a structured behavioural interview.