First aid is treatment for the purpose of preserving life and minimizing the consequences of injury and illness until help, from a medical practitioner or nurse, is obtained. Among natural disasters, earthquakes, floods and windstorms are not uncommon in Pakistan. The northern areas of Pakistan lie in an earthquake zone. An earthquake (October 8, 2005) in the Northwest Frontier Province and Azad Kashmir claimed 50,000 lives and left more than 80,000 injured. Roads were badly damaged after the earthquake and many remote villages were cutoff by landslides and consequently medical teams could not reach the village for 3-4 days. First aid provided by the local people could have reduced the death toll drastically. In a study in Italy it was concluded that 25% to 50% of earthquake victims who were injured and died slowly could have been saved if first aid had been rendered immediately.1

There is a rising trend in the number of motor vehicle accidents and the number of fatalities due to motor vehicle accidents in Pakistan. In a 40 years period from 1956 to 1996, there was a 14 fold increase in the number of motor vehicle accidents and a 16 fold increase in the number of deaths due to motor vehicle accidents.2 First Aid provided by the bystanders is very crucial and is life saving at times. In a study among public school teachers in the United States, one third had no training in FA and 87% of them agreed that emergency care training should be included in teachers' preparatory programmes.3 A study conducted in Edinburgh reveals that only 13% of people could correctly handle paediatric emergencies.4 The ability of drivers to give first aid was assessed in a study which revealed that very few drivers could give first aid at the accident site.5 In a study conducted in Greece the mean value of correct answers regarding first aid knowledge was higher in industry workers trained in FA than those who never had a formal training.6 In another study carried out in Kenya, it was revealed that only 45.5% of the soccer team coaches could administer first aid to the soccer players.7

A study conducted in UAE on the efficacy of first aid training programme for first year medical students showed that the programme provides students with sound first aid knowledge and practical Basic life saving skills.8 Another study done in Turkey stated that it was highly effective to teach medical students First aid and Basic life saving skills as they can form effective peer first aid trainers for other university students.9 In Brazil, a study was conducted to evaluate the first aid skills of adult population. It was concluded that those who had a previous exposure to televised first aid training performed 9-96% of the skills correctly while in the control group 1-34% correctly performed the skills.10 A study conducted in Germany showed that vast majority of bystanders had little or no first aid training and that there was a direct relationship between the level of first aid training and quality of first aid measures taken by the bystanders.11 In a study of 166 resuscitations before reaching hospital, all of them were done by medical personnel who were there by chance at the time, and 28.3% were successful, thus this further stresses the need for proper first aid training.12

First aid training offered by the Red Crescent Society in Pakistan trained a few people in three years either as volunteers or if required by their employment status.13
At some point in a medical curriculum students are taught how to handle emergencies in a hospital emergency setting where drugs and other necessities are available. But the adequate knowledge required for handling an emergency without hospital setting at the site of the accident or emergency may not be sufficient. The main objective of this study is to find out the level of knowledge of undergraduate students in providing first aid care and to find out the number of students who have received formal first aid training. We also assessed the preferred responses of the students to various emergency situations. Another important aspect of this study is to find if students of medical colleges are any better at providing first aid than students of other undergraduate colleges. This study also aims to assess the need for further training in first aid for medical students and whether they feel that their knowledge is sufficient in this regard or not. Our hypothesis was that undergraduate students of Karachi do not have sufficient knowledge in providing first aid care and very few will have had any formal first aid training. We expect the students of medical colleges to have a better understanding of first aid care than those of other colleges.
The information obtained from our study will identify the emergencies in which there is lack of knowledge among the students. We will also be able to assess if the students themselves feel the need for first aid training. 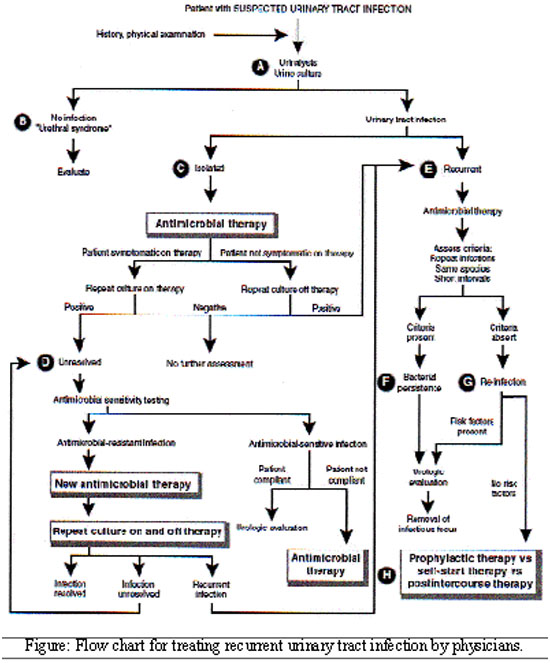 The objectives of this study were to assess knowledge, attitude and practices of first aid measures in students of medical and non-medical colleges of Karachi and to identify emergencies in which majority of the students are confident to provide first aid independently. Knowledge of the following common first aid emergencies was assessed: drowning, heat strokes, choking, electrocution, profuse external bleeding (including epistaxis), fractures and dislocations, poisoning, unconsciousness, seizures and heat burns.
Of the six colleges, three were medical and three non-medicals. Convenient sampling was carried out. The colleges were visited and with the guidance of the college administration announcements were made in the classes, consent forms and questionnaires were handed out and filled by the students at their convenience. The data gatherers were available to answer any questions. The target population size was 460, based on 50% prevalence and 95% confidence interval. The eventual sample size achieved was 446.
There were 22 questions in simple English to assess the knowledge regarding first aid. These evaluated management of the emergency conditions listed above without hospital setting, under the heading of 'Operational Variables'. The list of emergencies have been adapted and modified from BBC health website.14 A score of at least 50% was considered as 'Adequate Knowledge' about first aid. A score of, or below, 30% was considered as 'Poor', and of, or above, 70% as 'Excellent'.
Data was entered using 'EpiData 3.0'. The entered data was imported to 'SPSS for Windows', where subsequent analyses were carried out with the aid of this software. Consent was first taken verbally, followed by in writing. Questionnaire was not filled until the consent was obtained from the participants. Each institution was given a code, and each form was coded separately. Participants with minimum of 2 years of bachelors training in the institutions visited for data collection and currently continuing their education were eligible for the study. This was enforced so that an effective comparison could be made between students of medical and non-medical colleges, assuming that with 2 years of medical training the responses of students with medical background should be better than those of non-medical background. The institutions were chosen so that the sample will have a balanced representation of the different types of undergraduate training available and also if permission was given by the institution administration to carry out data collection. Participants with less than 2 years of bachelors training were excluded. 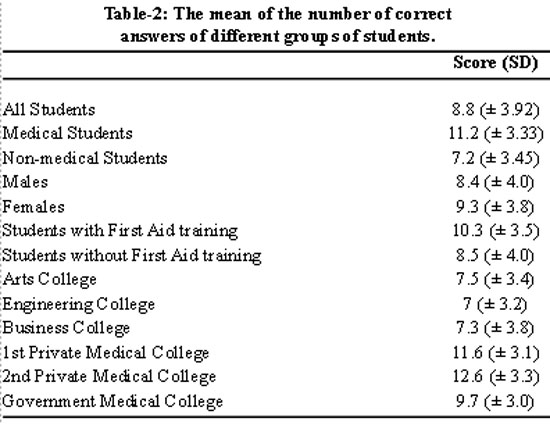 The overall mean score of the students was very low (40.3%). This lack of knowledge of first aid amongst the university students is indicative of the fact that only a few people have formal first aid. The low rate of first aid training was also observed in a study conducted on primary caregivers of children in Singapore, where 80% had not attended a first aid course.15 A study conducted in USA on public school teachers showed that only one third of them were trained in first aid. The majority of public school teachers (87%) thought that emergency care training should be a part of teacher preparatory.3 Even if students wanted to get first aid training very few (12.3%) knew of places in Pakistan that offered first aid courses. The effect of age-old misconception about handling of different medical emergencies was evident as 56.1% of students confirmed their parents as their source of information. Many students (94%) realized that first aid training should be part of the curriculum with 84% suggesting that it should be part of pre-university curriculum. This percentage is comparable to the one stated in the study conducted in Singapore, where 85.5%of respondents said that first aid course will be useful.15
Students having received formal first aid training scored better than those who had no first aid training but still the mean score itself is quite low emphasizing the need for recertification/refresher courses so as to keep oneself updated with latest developments and improvements. We also had not been able to ascertain the level of first aid training that these students have had. A study in Vienna conducted on bystanders showed a clear relationship between the level of first aid training and the quality of first aid measures employed by bystanders.11
The medical students amongst all the university students, which also included engineering, arts, architecture and business students, fared better than others (51%vs 33%, p<0.001) showing greater awareness of first aid amongst medical students than non-medical students. The medical training and teaching seemed to have had effect in enhancing knowledge of medical students regarding first aid, with 63.3% of medical students getting more than 50% as opposed to only 18% of non-medical students.
Even though many students had encountered epistaxis (47.8%), only 7.4% selected the correct option. In another study done in UK, it was seen that only 11.3% of the respondents knew the correct first aid management of epistaxis.16 This is in contrast to the knowledge of students on fractures, where 44.5% of students chose to immobilize the limb when suspecting a fracture.
The students did not seem to know that grease should never be applied to a fresh burn as it is occlusive, non-sterile, promotes bacterial proliferation on the surface of the wound.17 A study conducted in Turkey on occupational physicians showed that only 31.7% used up to date modalities with many having inadequate knowledge.18 A study conducted in Ireland also showed that only 23.2%of people presenting to plastic surgery department knew the correct management of burns.19
Even though medical students scored higher than non-medical yet their knowledge was not sufficient, suggesting the necessity of introduction of first aid training programme in medical curriculum like UAE.8 This programme can be extended to the one like conducted in Turkey where trained medical students formed effective peer first aid trainers for other university students.9 These measures will ensure that an increased number of first aid trainers are available at a time of any calamity faced by the people.

In conclusion, the students across the six colleges had inadequate first aid knowledge, and many recognized the need for introduction of formal first aid training program at school/ college level.
The lack of knowledge of first aid amongst the university students is indicative of the fact that only a few people have first aid training. First aid training programmes should be introduced at school and college levels in order to decrease the early mortality and morbidity of accidents and emergencies.
Limitations
The choice, and the number, of colleges for this study were on basis of feasibility, diversity and relative ease of obtaining permission from the institutions.

We would like to acknowledge the constant help and support of Dr. Masood Kadir throughout the duration of this project from designing it to the writing of the first draft. We will also like to thank Mr. Salman Sabir for his expert opinion and help with analysis.