Partial ureterectomy for a huge primary leiomyoma of the ureter

Leiomyomas of the genitourinary tract are rare, and the ureter is an uncommon site for them.1 Renal leiomyoma, a slow growing benign neoplasm, can arise from the capsule or peripelvic tissues and less often from the renal vein. Of the 30 leiomyomas of the kidney reported as of 1989, the average size was 12.3 cm, and the largest tumour was 57cm in diameter. Since 1955 Leighton et al.2 reported leiomyoma of the ureter, and now 10 cases have been reported to date. This case will be the 11th. This is a unique form of leiomyoma of the ureter due to its large size.
Ureteral leiomyoma often causes hydronephrosis, making it difficult to diagnose. Therefore, total nephroureterectomy is performed because of the possible diagnosis of malignancy. As the technology of ureteroscopy has advanced in recent years, the possibility of a malignant tumour can be excluded by preoperative examination, increasing the number of reports of cases in which the kidney was preserved.3 We experienced a huge primary leiomyoma of the ureter in which partial ureterectomy was performed. The present report describes this case together with a review of published literature.

The patient was a 24 year old man with a history of dull left flank pain and a palpable abdominal mass since 3 months. On physical examination, a soft, mobile and well defined mass was palpated in left periumbilical region with no tenderness. Routine lab tests including complete blood count, liver function tests, renal function studies and urine analysis were all within normal limits.
Ultrasound study showed a large heterogeneous intra abdominal mass with compression effect on the left ureter and causing hydroureteronephrosis. Further work up with abdominopelvic computed tomography (CT) scan revealed hydroureteronephrosis of poorfunctioning left kidney. A large abdominal mass measuring about 120×70mm, comprising of cystic and solid components extending from anterolateral aspect of aorta to anterior abdominal wall, was observed. There was no lymphadenopathy elsewhere.
Since there was a very low probability of a ureteral tumour, we did not perform any endoscopic evaluation of left ureter before surgery.
The surgery was done through a midline incision. There was a soft, mobile and well defined encapsulated mass in retroperitoneal cavity (Figure-1). 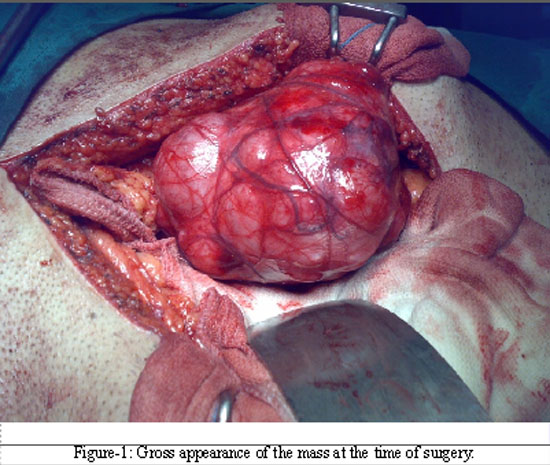 An approximately 5-6 cm length of left ureter was completely involved by the tumour. The mass was dissected and sent for rapid diagnosis using a frozen section.
After confirming the absence of malignant features by pathological analysis, the kidney was mobilized and an end to end tension free anastomosis of the ureter was done. A 4.8 F double J ureteral stent was placed at the same time. The dissected tumour was a large solid-cystic encapsulated mass, measuring 120×110×75 mm in size with a tan surface.
After removing the Foley catheter and closed suction drain on 4th and 5th postoperative day, the patient was discharged from hospital with no early complications. Double J ureteral stent was removed four weeks after surgery. IHC staining of the mass was positive for alpha smooth muscle actin and desmin (Figure-2). 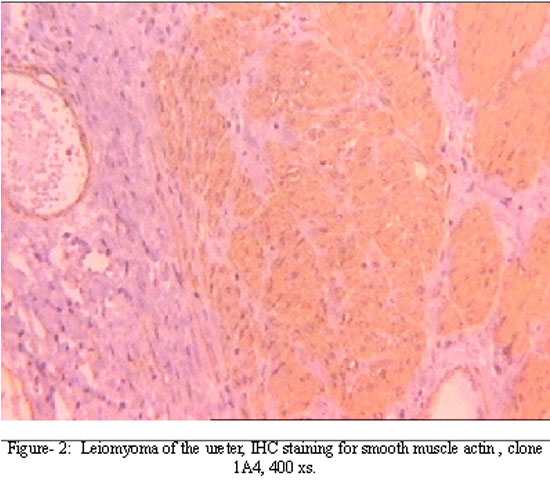 Six months later, an intra venus urography ( IVU) was obtained which revealed a poor functional left kidney. Since the left kidney was somehow hydronephrotic and atrophic in preoperational CT scan, this result was predictable.

Non-epithelial benign ureteral tumour of mesodermal origin is a rare disease, and ureteral leiomyoma is even rarer.2 According to our research, only four cases in Japan and six cases in other countries have been reported since the case report by Leighton et al. in 1955,2-10 making the present case the 11th (Table). 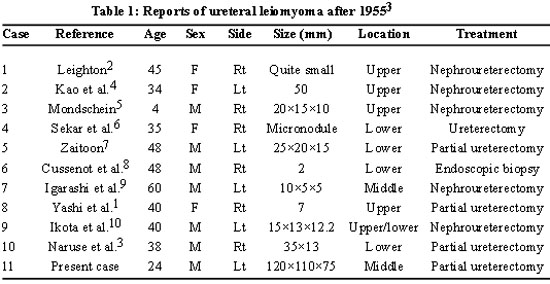 Apart from one case in an infant, most of the cases were in the age group of over 20 years which includes the present case. The lesions were located in right ureter in six cases and in the left in five cases. Seven cases were in men and four in women. The mechanism of development remains unclear, although inflammation, chronic stimulation, occlusion and trauma are suspected. In two cases, the patient had a history of ureterolithiasis, but not in the present case. Ikota et al. reported a diffuse leiomyoma of the ureter as a complication of multiple endocrine neoplasia (MEN) Type I.10
The diagnosis is made by diagnostic imaging such as excretory urography, retrograde urography or computed tomography (CT) and urinary cytology. No characteristic findings may be encountered.3
Surgical treatment was performed in 10 out of 11 cases. Partial ureterectomy preserving the kidney was performed in only five cases, including the present one. In the five other cases, nephroureterectomy was performed without differential diagnosis of benign or malignant tumour before surgery. It has become possible to diagnose benign tumours by preoperative examination as a result of advancements in ureteroscopic technology. It is important to pay careful consideration to the preservation a quick pathological examination during operation when a non epithelial benign tumour is suspected on ureteroscopy.
In our case, we did not have any suspicion of a ureteral tumour, so endoscopic evaluation was not performed. Definitive decision for partial ureterectomy (versus nephroureterectomy) was made after confirming benign nature of the mass with intra operative rapid pathological examination.

Leiomyomas of the genitourinary tract are rare and the ureter is an uncommon site for them. Ureteral leiomyoma often causes hydronephrosis, making diagnosis difficult. As the technology of ureteroscopy has advanced in recent years, the benign nature of the mass can be excluded by preoperative examination, increasing the number of the reported cases in which the kidney was preserved.