Endoscopic retrograde cholangiopancreatography (ERCP) is one of the mainstay procedure treatment of hepatobiliary and pancreatic diseases. Life-threatening complications such as pneumoperitoneum, pneumoretroperitoneum, pneumomediastinum, subcutaneous emphysema and pneumothorax related to this procedure rarely occur and only a few cases are reported in English literature. Herein, we report a patient who developed acute abdominal symptoms with subcutaneous emphysema and bilateral pneumothorax due to duodenal perforation, accompaniment of ERCP that was successfuly treated.

Minimal invasive endoscopic procedures, which are increasingly being used, may bring along some complications along with many benefits. Endoscopic retrograde cholangiopancreatography (ERCP) is widely used for the treatment of diseases located in the biliary-pancreatic canal and the periampullary region.1,2 The current study reports a case with life-threatening complications secondary to duodenal perforation after ERCP.

A 62-year-old woman was referred to our hospital's emergency department with a sudden onset of dyspnoea and abdominal pain. She had a history of having undergone endoscopic retrograde cholangiopancreatography (ERCP) for obstructive jaundice in a medical center approximately ten hours ago. In the epicrisis report, it had been stated that a klatskin tumour had been observed and stenting had been performed of hepatic-biliary ducts by ERCP. On physical examination, she was found to be icteric with blood pressure and heart rate of 80/50mm Hg and 132 beats/min, respectively. Subcutaneous crepitations were palpable in cervical region, prestrenal area and on the back. On pulmonary auscultation, breath sounds were found to be decreased bilaterally and inspiratory crackles could be heard in the lung bases. Abdominal examination was significant, however, revealed sensation of discomfort. Whole blood count revealed hyperleucocytosis (14000/mm3). Findings of the abdominal ultrasonography and abdominal x-ray were unremarkable. On a chest x-ray, bilateral pneumothorax in combination with diffuse subcutaneous emphysema was observed. Thoracic computerized tomography findings confirmed the diagnosis of bilateral pneumothorax in addition to mediastinal and subcutaneous emphysema (Figure 1). 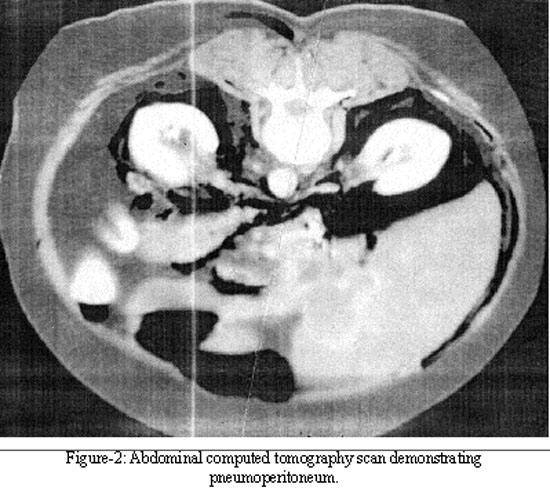 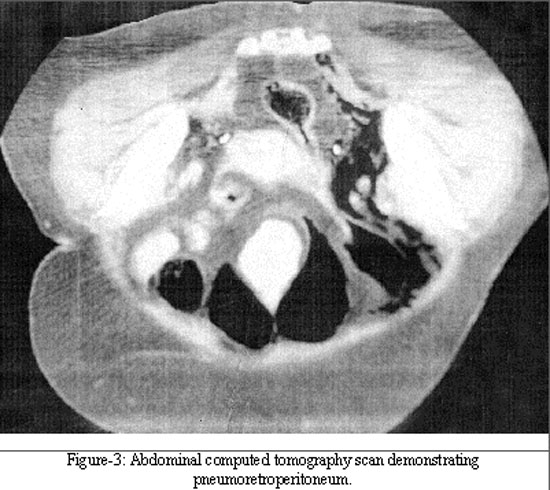 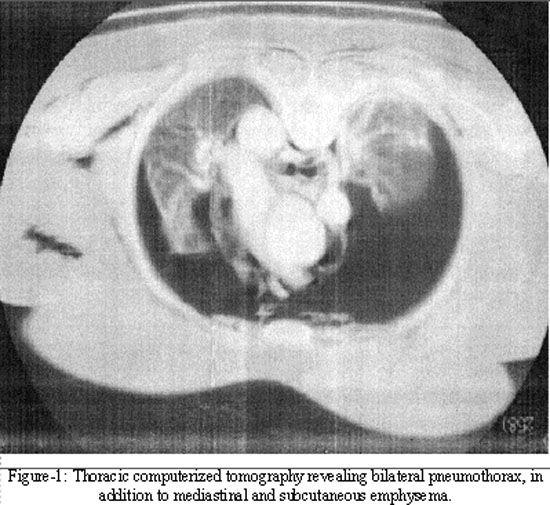 The patient was admitted, bilateral thoracic tubes were inserted and tube drainage was performed. Endoscopy was performed in order to exclude a possible oesophageal perforation. The mucosal integrity of eosephageal mucosa was intact; a blood clot was observed in the stomach and the procedure was hence terminated. A decision of surgical exploration was made with the suspicion of ERCP related gastroduodenal tract perforation. Intraperitoneal and retroperitoneal air was observed during exploration. The duodenum was mobilized employing the Kocher's maneuvre. Two perforations were observed in the periampullary region, which were repaired and tube duodenostomy was performed. Pancreas was normal except for the tumour mass. The surgical procedure was terminated without any intervention to the inoperable Klatskin tumour. Postoperatively patient remained well and recovered smoothly.

Subcutaneous emphysema and bilateral pneumothorax are rare and life threatening complications of ERCP with unidentified mechanism and require an algorhythmic and systematic management. Therefore, in order to achieve the accurate diagnosis and provide the most appropriate therapy, a multi-disciplinary approach and collaboration of multiple departments are of great importance in the management of these patients.

Partial ureterectomy for a huge primary leiomyoma of the ureter