Objectives: To asses the Maternal Mortality Ratio and the causes of maternal death over a period of three years in one of the rural district of Sindh Province, Pakistan.
Methods: A retrospective analysis of maternal mortality was carried out for a period of 3 years from 2006 to2008 by reviewing the maternal mortality record and statistics of National Programme for Family Planning and Primary Health Care of District Matiary, Sindh Province Pakistan. The information regarding demographic, reproductive parameters and verbal autopsy questions was collected and analyzed by SPSS V 16.
Results: The cumulative MMR was 297/ 100,000 live births. The direct causes accounted for 58 (80.5%) deaths. The high ratio of maternal mortality was found in women of age 29-39 years and in Para > 4.
Thirty five (48.6%) maternal deaths occurred at tertiary care hospitals, while 20 (27.8%) and 16 (22.2%) took place at home and on the way to hospital respectively.
Conclusion: Maternal Mortality in rural areas of Sindh Province Pakistan is still a challenge for the achievement of the Millennium development Goal (MDG) (JPMA 60:20; 2010).

Pregnancy is the normal healthy event in the reproductive life of women, yet this life- affirming process carries the risk of death and disability for many women.
Globally every year an estimated 5, 29,000 maternal deaths occur due to pregnancy related preventable causes like haemorrhage, hypertensive disorders, sepsis, obstructed labour and unsafe abortions. The world figure of MMR is estimated to be 400/100,000 live births, but it is not uniformly distributed. The MMR was highest in Africa (830) followed by Asia (330), Oceania (240), Latin America and Caribbean (190) and developed countries (20).1
Pakistan in similar to many other developing countries in having an unacceptably high maternal mortality. According to WHO and UNICEF estimates, maternal mortality ratio (MMR) of Pakistan is around 340/100,000 live births.2 Population based study done in early 1990s indicate MMR ranging from 281/100,000 live births in Karachi to 673/100,000 live births in Balochistan.3 According to Planning Commission estimates, maternal mortality ratio was 350/100,000 in 2000- 01 and 400/100,000 in 2005.4
According to the preliminary results from demographic and health survey (DHS) 2007, estimated nationwide MMR is 276/100,000 live births.5
Improving the maternal health and reducing the maternal mortality has been the key concern of several international summits and conferences since late 1980, such as summit for children in 1990, international conference on population and development in 1994, and fourth world conference on women in 1995 and their respective follow up evaluating Programm in 1999 and 2000 and the millennium declaration in 2000.1,6,7
Inspite of these several initiatives, the tragedy of avoidable high rate of maternal deaths, remain unchanged in developing countries.
Pakistan is one of the 191 countries that endorsed the United Nations Millennium Goals (MDGs) comprising of eight ambitious goals; the one of the health related goal is 75% reduction in maternal mortality ratio between 1990 and 2015.Achievement of this goal has met limited success in developing countries and Pakistan lags behind its south Asian neighbours.
There are now six years left for achievement of fifth millennium development goal. It appears unlikely that Pakistan will achieve its MDGs; however for the monitoring of progress, it is important to have periodic studies for assessment and analysis of maternal mortality.
Most of the studies about MMR are coming from the statistics which were compiled from hospital records.8,9 It is also known that most births in our country do not take place in hospitals,10 therefore the reported statistics do not accurately reflect the number of deaths during pregnancy and child birth.
The aim of the present study was to assess the maternal mortality ratio and its causes over a period of three years in one of the rural districts of Sindh Province, Pakistan.

A cross sectional study was carried out for a period of 3 years from 2006 - 2008 in one of the rural district of Sindh Province, Pakistan.
During the exercise existing recording and reporting practices were considered and the maternal mortality data was collected from records and maternal mortality statistics of three years period of the National Programme for Family Planning and Primary Health Care in District Matiary.
The National Programme for Family Planning and Primary Health Care, commonly known as "Lady Health Worker Programme" was launched in 1994, with 75,000 community based lady health workers. This is one of the ongoing successful Programmes of public health sector in Pakistan.
Five hundred and forty three Lady Health workers of this Programme are placed in the community of Matiary District, which comprises of Three Talukas and 19 union councils. The total population of the district is 6, 29,383, out of which 63% (397484) is covered by the National   Programme for Family Planning and Primary Health Care.
The Lady Health workers of the deployed area in Matiary District carry out 5-7 household visits a day and are trained to report Maternal Mortality to a health based supervisor on monthly basis. They collect the Information about maternal deaths on the maternal mortality report form which comprises of Demographic and reproductive parameters and verbal autopsy questions for assessing the clinical cause of the death. The data for maternal mortality for the present study was gathered from reported records of the population covered by National Programme. Maternal mortality is defined as death of women during pregnancy or within 42 days of termination of pregnancy from a cause related to or aggravated by pregnancy or its management but not from accidental or incidental causes. The maternal deaths due to accidental or incidental causes during pregnancy were excluded from the study.
The Maternal Mortality Ratio was calculated by using the formula:

The total number of live births for the given period were collected from record of National Programme for Family Planning and Primary Health Care.
All the information collected was entered and analyzed by SPSS V 16.

During the study period total numbers of live births reported were 25732, and there were 72 maternal deaths. The cumulative MMR was 279/100,000 live births. The direct causes accounted for 58 (80.5%) maternal deaths while only 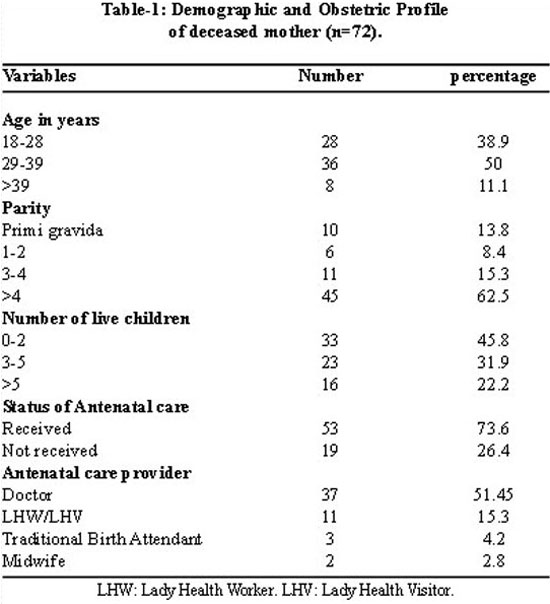 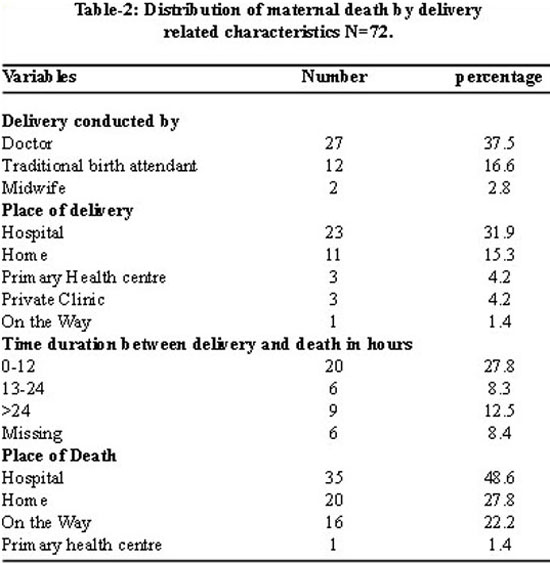 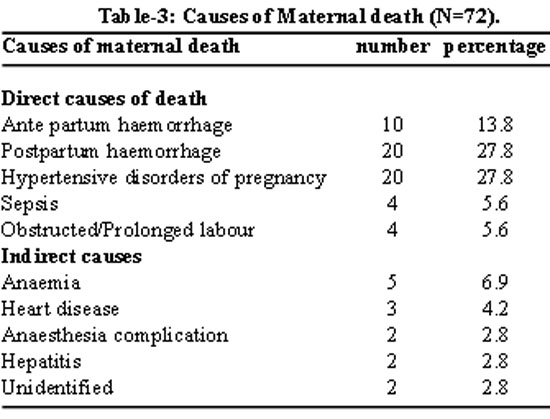 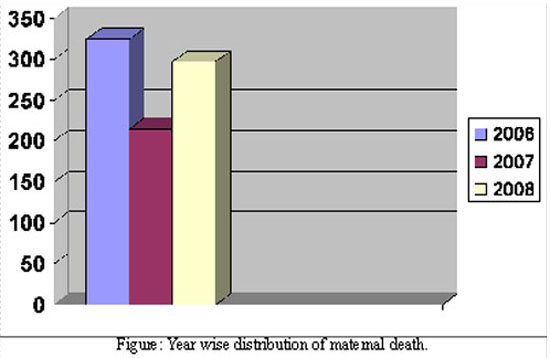 Death of mother is a tragic event. In practical life, it has a severe impact on the family, community and eventually the nation. The young surviving children left motherless are unable to cope with daily living and are at an increased risk of death.
Reduction of maternal mortality is an important MDG especially in low income countries, where one in 16 women dies of pregnancy related complications.11
Maternal mortality ratio varies throughout different countries of the world. In Sub-Saharan Africa, MMR reported in 2000 was1000/100,000 live births, almost twice that of south Asia, four times higher than in Latin America and Caribbean and nearly fifty times higher than in industrialized countries.12To estimate the magnitude and pattern of maternal deaths, several population based studies were carried out. These studies reported that the highest number of maternal deaths occurred in Asia, with the worst affected being the countries of south Asia. The three countries India, Pakistan and Bangladesh account for 46% of world's maternal deaths.13 According to Register General of India (RGI) estimated MMR of India in 2000 was 453/100,000 live births.14
The Government of Pakistan estimated MMR in 1978 as between 600-800/100,000 live births.15 Pakistan Integrated Household survey reported the figures of 340/100,000 in 1996-97 and 530/100,000 live births in 2000/2001.1616 In 1997 the figures reported were 433/100,000 live births.3 Another study on maternal health care in the rural area of district Hyderabad gave an estimated maternal mortality ratio of 689/100,000 live births.10
The preliminary results of Demographic and household survey 2007 reported the nation wide MMR of 276/100,000 live births. It is (320) in rural areas as compared to urban area (177). The figures are (277) in the province of Punjab, while in Sindh, North-West Frontier and Balochistan it is (311), (272), and (765) respectively.5
The present study found a cumulative MMR of 279/100,000 live births. It was 324/100,000 live births in 2006, 215/100,000 and 279/100,000 live births in 2007 and 2008 respectively.
This MMR can be an underestimation of actual figures as the reported data from 63% of the total population of the area studied is available. The other reason can be the misreporting of some maternal deaths which may have been missed.
The association of advanced maternal age and high parity with high MMR has been demonstrated in the presented study, similar to reported studies from literature.3,5,9
It is a well known fact that antenatal care is the best means to recognize the risk factors for dangerous direct causes of maternal death.
It is noteworthy that 53 (73.6%) of the mothers had received antenatal care, mostly by trained health personnel and at the time of delivery, 27 (65.8%) mothers were attended by female doctors at a hospital, and very few 12 (29.2) were delivered by TBAs at home. These results show improvement in relation to reproductive health indicators. Another study done in 2002 in the same geographic region of rural Sindh reported that 63% of women have access to antenatal care mainly by a doctor, nurse or lady health visitor, but in that survey majority of women were delivered by TBAs.10
The Pakistan household survey of 2001 and Pakistan social living standard measurement survey done in 2005 reported that over a 10 years periods from 1997 to 2005/06, the percentage of pregnant women who received at least one visit for antenatal care, has increased in frequency from 30% to 50%. Similarly, the proportion of deliveries attended by skilled birth attendants has increased from 31% to 81%.4 Similar results have been reported by Midhet.5
It was observed in our study, that majority 35 (48.6%) deaths occurred in the hospital, followed by home and on the way to hospital. This could be due to the reason that a high risk pregnancy or women with complications were referred to the hospital for delivery by skilled birth attendants. Other reasons could be the provision of substandard care to women at or after the delivery or on the arrival of mother at hospital.17,18
Delay in reaching hospital especially with moribund haemorrhage, long distance from the health facility and poor availability of transport, have been the recognized risk factors for maternal mortality.3,5
The causes of death in the present study are consistent with other reported studies from developing countries, haemorrhage being the leading cause followed by hypertensive disorders of pregnancy and sepsis.3,5,12,19
Prevalence of anaemia has been reduced from 88% in 1965 to 36% in 2001 to 2002,4 but still the ratio of death due to anaemia and consequences of anaemia is high in our rural population, similar to literature.20

The National Programm for Family Planning and Primary Health Care Pakistan, is effectively exercising the Verbal Autopsy method for assessment and estimation of maternal mortality ratio. It may prove as a good source to generate statistics and assess the clinical causes of maternal death. Continuous monitoring and evaluation is necessary to strengthen this system of reporting. It is also concluded that maternal mortality still remains high in rural Sindh.