Objective: To assess results with NIV in acute hypercapneic respiratory failure and to identify outcome predictors.
Methods: This was a retrospective observational study on consecutive patients presenting with acute type II respiratory failure and meeting criteria for NIV use over a 5 year period. Patients presenting with haemodynamic instability, inability to protect their airway, malignant arrhythmias and recent oesophageal surgery were excluded. Univariate and Multivariate regression analysis was used to determine the impact on survival. A p value of < 0.05 was considered statistically significant. Software used was SPSS 14.
Results: Total numbers of patients included were 119; 52.9% were males. Mean age was 63.4 ± 11.9 years. Overall Survival to discharge rate was 76.5%, intubation rate was 12.6% and mean length of stay was 11.4 ± 10.9 days. Statistically significant improvements were observed in the pH and PaCO2 at 24 hours and 48 hours compared to baseline (7.28 v/s 7.37, p<0.001; 74.2 v/s 65, p<0.001). On multivariate regression analysis, sepsis at admission predicted mortality (adjusted Odds ratio 26.4; 95% CI 2.3, 304, p < 0.009). A serum HCO3 > 35 Meq/L (adjusted Odds ratio 0.9; 95% CI 0.83, 0.98, p < 0.015) identified those less at risk for intubation.
Conclusion: NIV was found to be both safe and effective in the management of acute hypercapneic respiratory failure. Sepsis and serum HCO3 at admission identified patients having poor outcomes (JPMA 60:13; 2010).

The use of noninvasive ventilation (NIV) in patients with acute hypercapneic respiratory failure has shown to be effective in the relief of dyspnea, the improvement of vital signs and gas exchange, in preventing endotracheal intubation, and improving overall survival.1-6 It has now become the standard of care for such patients.3,5
NIV is underused in Pakistan since most pulmonary physicians in practice are either not trained in its usage or have concerns regarding the time commitment that these patients impose on the care process. There is dearth of literature on how well NIV is tolerated in patient populations unique to our region. This fact is especially unfortunate since NIV is a cost-effective intervention; particularly for countries like Pakistan where health care delivery is largely determined by the patients' ability to pay for service. It is estimated in a study from United Kingdom that NIV given on wards reduces the need for intubation by 44% and halves mortality in hospital in patients with chronic obstructive pulmonary disease and mild to moderate acidosis and by preventing intubation, NIV may help to avoid approximately three to nine ICU admissions per year and consequently result in a substantial cost saving for patients.7
There are some patients who do not respond to NIV and in these, invasive ventilation becomes essential. Studies from the West report failure rates of 24% to 50%.2,8 Delays in recognizing non-responders can increase hospital morbidity and mortality.8 In an effort to optimize outcomes, it is therefore essential to identify non-responders early.
This study was designed to primarily asses the safety and efficacy of NIV in hypercapneic acute respiratory failure in Pakistani patients and additionally to identify prognostic variables for survival, death and endotracheal intubation.

This observational cohort study was conducted between 2001 and 2005 at Aga Khan University Hospital, a 450-bedded tertiary care hospital in Karachi, Pakistan. All adult patients (aged 16 years or above) presenting with hypercapneic acute respiratory failure (ARF) and meeting criteria for non-invasive ventilation use were enrolled. The hospital Ethics Committee approved the research protocol.
Hypercapneic ARF was defined as the presence of all the following:
Respiratory rate higher than 25 breaths/minute, arterial pH less than 7.35, and partial pressure of arterial carbon dioxide (PaCO2) in excess of 45 mmHg.
NIV failure was defined as endotracheal intubation and invasive ventilation after placement on NIV and/or death.
In patients with multiple admissions during the study period, the first application of NIV was used for analysis. We excluded patients with haemodynamic instability, impending respiratory arrest, inability to protect airway, excessive airway secretions, pneumothorax, acute upper gastrointestinal bleeding, epistaxis, facial deformity/trauma and those with a known hypersensitivity to the mask material.
We applied NIV using BiPAP Vision (Respironics, Murrysville, Pa., USA) in the spontaneous mode with the assistance of pulmonary fellows/ residents and trained nurses. All NIV was initiated in either the Emergency department, Special Care Units or the Intensive Care Unit. As soon as possible, patients on NIV were transferred to a dedicated NIV Special Care Unit. Therapy was initiated with an inspiratory positive airway pressure (IPAP) of 10 cmH2O and an expiratory positive airway pressure (EPAP) of 5 cmH2O. This was optimized using continuous pulse oximetry readings (aiming to maintain saturation between 92-95%), arterial blood gas measurements (at 1 hour and periodically thereafter as clinically indicated) and assessment of patient comfort. Three oronasal masks were available to optimize patient comfort: small, medium /small and medium, tightly secured with head straps to minimize leaks. NIV was applied initially for at least 6 hours, lengthening this period according to the patients' requirements.
The discontinuation of NIV was based on clinical judgment and arterial blood gas values.
Patients exhibiting respiratory pauses with loss of alertness or gasping, psychomotor agitation requiring sedation, systolic blood pressure lower than 70 mmHg, pH below 7.26 after 1 hour of NIV or respiratory arrest, were endotracheally intubated.
A pre-designed structured format was used to gather data on demographic features, clinical features, arterial blood gas measurements, duration of NIV and reasons for NIV failure.
The primary outcome variables were endotracheal intubation rate (failure of NIV) and survival to hospital discharge. A secondary study outcome was to identify variables predictive of in-hospital mortality and endotracheal intubation.
The data was analyzed as frequencies for nominal variables and as means ±standard deviation for continuous variables. Univariate analyses was performed using the chi2 test or Fisher's exact test for nominal variables and the t test for means.
To identify factors predictive of mortality whilst using noninvasive ventilation, a univariate analysis was done to compare characteristics in patients surviving to hospital discharge and those that died during hospitalization. Variables with p values less than 0.10 were entered into a forward stepwise logistic regression analysis using an entry level of 0.05 and a removal level of 0.10. The adjusted odds ratio (OR) was calculated with 95% confidence intervals (95% CI) for all independent predictors of in-hospital mortality. A similar process was used to determine variables predictive of failure of NIV. A p value less than 0.05 was considered statistically significant; all tests were two tailed. SPSS statistical software package (version 14.0) was used for statistical analysis.

One hundred and nineteen patients with hypercapneic ARF were enrolled in the study. Mean age of patients was 63.4 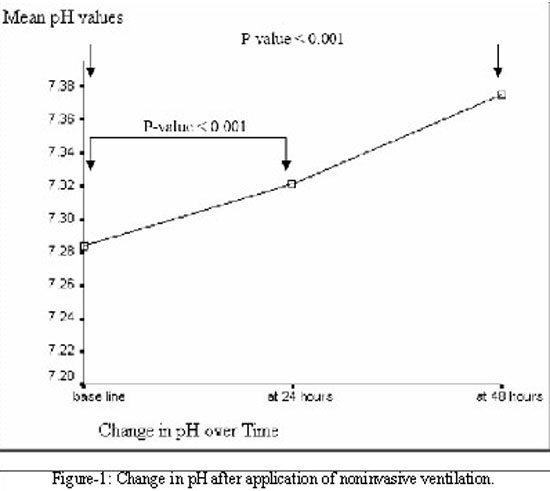 ± 11.9 years with 63 (52.9%) males. COPD was the primary cause of hypercapneic respiratory failure in 109 (91.6%) patients, with acute asthma exacerbations accounting for the remainder. All patients were haemodynamically stable at 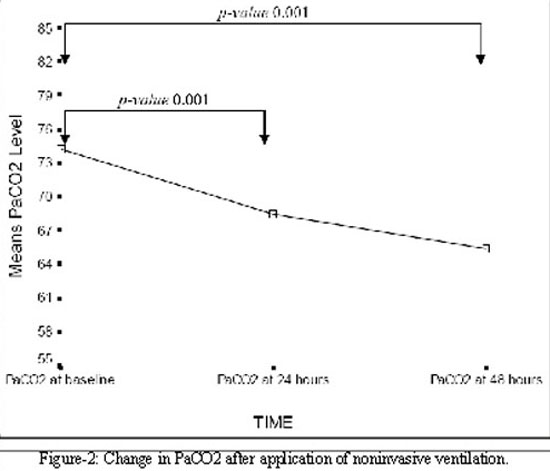 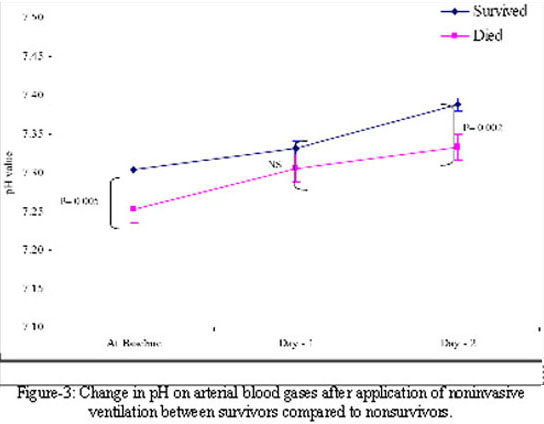 On multivariate analysis the only remaining independent predictor of in-hospital mortality was Sepsis at admission, (adjusted Odds ratio 26.4; 95% CI 2.29, 304.3, p < 0.009).
Figure-3 shows the change in pH after application of noninvasive ventilation between survivors and nonsurvivors.

This study found that NIV was equally safe and efficacious in Pakistan as reported in patients from more developed health care systems. It was observed that patients presenting with co-existing sepsis and hypercapneic ARF were at a higher risk of dying in the hospital. Patients presenting with serum HCO3 values less than 35Meq/L were at a greater risk of failing NIV and requiring invasive ventilation.
Though NIV is well accepted and used across the west, there are very few regional descriptions of NIV usage. In 2004, Hussain S.F et al9 reported on an overall successful experience with noninvasive ventilation in 69 patients with various causes of acute respiratory failure. Similarly, we reported the benefits of using NIV in COPD patients as an adjunct to post-extubation respiratory failure.10 In 2006, Singh et al11 from India also reported their favourable experience in 50 patients with all -cause acute respiratory failure. Our's is the largest study reported so far from this region and thus adds strength to the recommendations of using NIV even in poor, underdeveloped health care systems.
In the presented study, a diagnosis other than COPD was a risk factor for mortality. Literature has shown that NIV is most effective in patients with hypercapneic ARF due to COPD.12 There is little evidence for the efficacy of NIV in hypercapneic ARF due to conditions other than COPD. Although a meta-analysis suggests that NIV is more effective in COPD exacerbations than other conditions4 most studies in non-COPD conditions involve hypoxaemic ARF and do not focus on hypercapneic ARF.13,14 In our study, majority of patients other than COPD group were asthmatic, with significantly high mortality rates because of failure of intubation. These patients were already decided DNR at the time of admission secondary to multifactorial reasons. It is known that hypercapneic ARF in these patients without intubation has a bad prognosis.
A low pH at presentation has shown an association with increased mortality15,16 and the need for intubation17 in patients admitted with COPD exacerbations. These studies have suggested that no improvement is observed in respiratory acidosis and respiratory rates during the first few hours of NIV and there is a higher likelihood of NIV failure.6,18 A fall in PaCO219,20 and improvement in pH2,19-21 have also proved to be protective. Our results are consistent with previously published studies. The findings identified a low pH at admission and failure to improve it for 48 hours, to be highly predictive of mortality in patients initially placed on NIV.
Age was found to be a risk factor for mortality in the presented study. Benhamou et al22 also reported a higher rate of treatment failure in elderly patients while Balami et al23 opined that NIV can be used successfully in elderly patients admitted with hypercapneic respiratory failure secondary to acute exacerbation of COPD. Their findings of improvement of acidosis, respiratory rate and hypercapnia from the use of NIV are consistent with findings of other randomized trials conducted in a younger population.1-3 Increase failure rate in elderly patients may be due to associated co-morbidities. This has been supported by Seneff et al24 and Morettiet et al.25 Singh et al11 reported that in patients with acute respiratory failure, presence of one or more organ dysfunction was associated with failure of NIV. Elevated creatinine and concurrent sepsis in our patients was also associated with increase failure rate and mortality which was consistent with finding of these studies. Concurrent sepsis as an independent predictor of mortality in our study has not been identified previously.
The presented study had limitations. There is accumulating evidence regarding improved outcomes with NIV in diverse patient groups with acute renal failure. This has broadened the indications and may have created a selection bias during the study period. The 'NIV service' was introduced at our institution in 2001, and a "learning and experience effect" on the team caring for patients could have had an impact on the outcomes. The retrospective nature of the data acquisition is another limitation. Lastly, the study population was recruited from a single tertiary-care center and this could affect the generalizability of the findings. Despite these reservations, this survey provides valuable information and is useful in demonstrating the value of NIV in a low income country.
In conclusion, to the best of our knowledge, this is the first study from Pakistan that has attempted to identify variables predictive of outcome in patients with acute hypercapneic respiratory failure treated with NIV. It is recommended that NIV should be added to the standard medical therapy for Pakistani patients with acute exacerbations of COPD. The initial pH and PaCO2 can be used clinically to stratify patients according to their risk of meeting criteria for intubation. Monitoring such patients closely is necessary to evaluate treatment responsiveness and to facilitate endotracheal intubation if NIV fails.

Frequency of hypothyroidism in patients of b-thalassaemia