Cystic fibrosis in a child with situs inversus, a distinctively unusual association

Cystic fibrosis is the most frequently witnessed potentially lethal autosomal recessive, genetic disease but its incidence is extremely low in South- Asian population. We report a case Cystic Fibrosis in a patient with Situs inversus, a condition not witnessed in medical literature of Pakistan or more captivatingly even Asia. The patient was a three and half years old male child presenting with a history of fever, cough and jaundice. Physical examination lead to the initial diagnosis of situs inversus, which was confirmed by the chest radiograph, echocardiography and ultrasound of abdomen. Further evaluations were conducted to establish the cause of respiratory symptoms. The findings of pansinusitis as evidenced by the radiography and an exceedingly high sweat chloride concentration of 100mmol/L resulted in the conclusive diagnosis of Cystic Fibrosis.

Situs inversus despite its rarity is a well known clinical entity. It is an autosomal recessive disorder1 of unknown etiology characterized by retroversion of thoraco-abdominal organs such as heart (Dextrocardia), spleen and liver. It occurs in approximately half the cases of primary ciliary dyskinesia, the incidence of which is 1 in 20,000 to 60,000 in general population.2 In the past, numerous case reports have been published throughout the world highlighting its association with a number of conditions such as bronchiolitis, hearing loss and retinitis pigmentosa3 to biliary atresia.4 To the best of our knowledge, this is the solitary documentation of a case of a child with Cystic Fibrosis and Situs Inversus not only in Pakistan, but in the Asian medical literature.

Three and a half years old male, second child of consanguineous marriage presented with a history of continuous, low grade fever and jaundice since 18 months. His parents had consulted several general practitioners but the relief of symptoms was transient with use of drugs, recurring again with their discontinuation. Jaundice was associated with pale faeces and dark urine. He also had history of episodic bouts of cough since the age of one year accompanied by wheezing and exaggerated by cold environment. In addition, 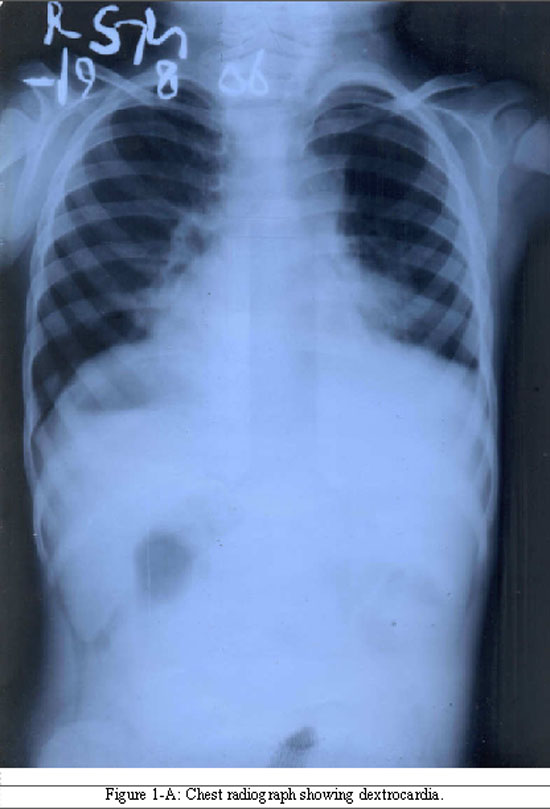 there was also a complain of epigastric pain for two to three months , which was sharp in nature and intermittent in character, exaggerated by hunger and relieved by food intake. The child was completely immunized as per EPI, developmentally appropriate for age except for difficulty in feeding himself and with unremarkable birth history.
Physical examination showed erythema of oral mucosa and stomatitis. Jaundice was negative at the time of examination. Upon palpation, the apex beat was localized in the right 4th intercostal space, medial to the mid-clavicular line. The abdomen was soft and non-tender, liver was palpable 3 cms below the left costal margin with a span of 7.5 cms. And 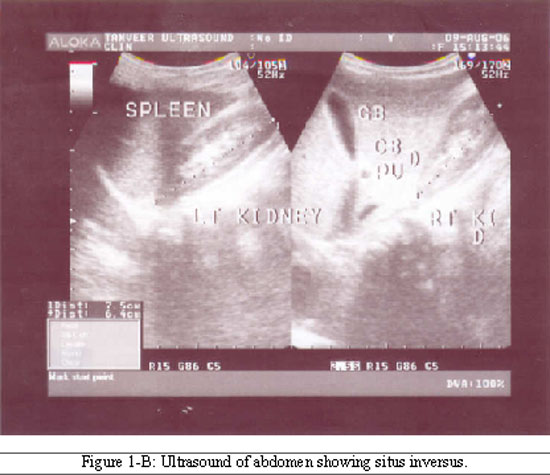 Studies in Pakistan have documented the association of Situs inversus with different conditions such as Poland anomaly, Biliary atresia, Coronary artery disease and Meckel's syndrome. We report a unique case of association of Situs inversus with Cystic Fibrosis. Although Cystic Fibrosis is the most common inherited, potentially lethal disease in the Caucasian population, its incidence is very low in the population of Indian sub-continent, with different studies reporting prevalence of this autosomal recessive disease to be in the order of 1 in 10,000 to 1 in 40,000.5 Among the critical findings, the most captivating and crucial was the determination of sweat chloride concentration, the standard screening test for the diagnosis of Cystic Fibrosis. Due to genetic basis this sweat chloride concentration test is the gold standard for diagnosis of Cystic Fibrosis in Pakistani population, as delta F508 mutation of Cystic Fibrosis Transmembrane Regulatory gene (CFTR) is found in less than one third of the identified cases in Pakistan.6 This is considered to be the most regularly witnessed genetic alteration in different regions of the world.7 The result obtained in our patient was 100 mmol/L (Chloride concentration equal to or greater than 80 mmol/L) is strongly positive for the diagnosis of Cystic fibrosis.7 In addition, the patient also had sinusitis which is one of the presentations of Cystic Fibrosis.7 Pansinusitis is an exceptional finding in a child as it is considered to be 'Universal' in Cystic Fibrosis8 and normal sinus radiography is so distinctly infrequent in such patients that it almost precludes its diagnosis. The disease has varied clinical presentations of which persistent cough was consistent with findings in our patient. A study at Aga Khan University concluded that 80.6% of Pakistani patients present with respiratory problems as their chief presenting complaint.9 Another study conducted in Canada on South Asian immigrants concluded that one third of the patients had prolonged (greater than 6 months duration) respiratory symptoms as their major presenting complaints and the Lab investigations demonstrating the mean sweat chloride concentration of 95 mmol/L in such patients.10 Furthermore, more than half of patients also have moderate to severe gastrointestinal problems at the time of diagnosis and this trend is seen in both South- Asian patients and those from European and American origin. The age of presentation of our patient, i.e. 3.5 years, was greater than the majority of the reported cases in Pakistan which have been diagnosed within first year of life. The presence of Cystic Fibrosis will modify the clinical outcome in this patient with situs inversus.

The necessity of awareness of Breast Cancer amongst women in Pakistan