Objectives: To determine the baseline level of awareness amongst a rural community about Diabetes Mellitus (irrespective of type 1 or type 2), its risk factors and complications.
Methods: This was a cross-sectional survey conducted at the community of Tarlai, Islamabad, Pakistan, in January of 2008. A structured questionnaire was used and 300 adults (age > 18 years) were assessed on their knowledge regarding awareness of Diabetes Mellitus, its risk factors and complications. All data collected was entered into SPSS version 10.0. The data was re-validated and analyzed.
Results: Out of the three hundred adults subjected to the survey, only 129 (43%) adults had any awareness of Diabetes Mellitus. Adults with no regular, scheduled exercise were 221 (73.7%) and 256 (85.3%) did not have healthy eating habits. Awareness of risk factors was present in 42 (14%) while awareness of the complications associated with the disease was 65 (22%). Adults which reported as never going for regular checkups to any clinic or hospital were 232 (77%).
Family history of diabetes mellitus was statistically significantly associated with awareness about diabetes mellitus (65% vs 32%, p <0.001), people who were in contact regularly with health care providers were more aware about diabetes and the associated risk factors than those who were not (71% vs 35%, p <0.001). Sex was not associated (p=0.28) with awareness about diabetes mellitus, nor was the educational status (p=0.46).
Conclusions: Majority of adults were unaware of Diabetes Mellitus itself and associated risk factors. Raising public awareness of the disease through outreach programmes and mass media should be planned and implemented (JPMA 59:798; 2009).

Diabetes increases the economic burden on poverty stricken societies in Pakistan, which only intensifies their already unhealthy and risky life styles. According to the International Diabetes Federation (IDF), Pakistan had 6.2 million people with diabetes in 2003. By 2025 the number of people affected by diabetes is expected to rise to well over 14.5 million. Six million people are currently suffering from impaired glucose tolerance, and will eventually contract diabetes. Pakistan has the seventh largest population of diabetes in the world, and will take fourth place by the year 2025.1 Deaths from diabetes alone are projected to increase by 51% over the next 10 years.1
The prevalence of diabetes in Pakistan is so high that 12% of all people above the age of 25 have diabetes. The normal lifestyle in Pakistan predisposes the population to diabetes due to the prevalence of risk factors, such as obesity. Recent BMI studies showed that 37% of all male diabetics, and 79% of all female diabetics were obese. According to the waist to hip ratio, 79% of men with diabetes and 96% of women had central obesity. According to a Diabetic Association of Pakistan study into chronic complications involving 500 people with diabetes, retinopathies affected 43% of people, nephropathy affected 20%, and neuropathy affected 40 percent of people.2 The diabetic community lacks the facilities for screening and monitoring (e.g. urine analysis, blood sugar tests), and the drugs which can ensure a healthy, 'normal,' life for people with diabetes. Low literacy rates in Pakistan suggest that if diabetes awareness campaigns are to be successful, media must be involved. Education programs on health issues, promoting a healthy lifestyle, and focusing on sound dietary habits and exercise are needed. Warnings about the hazards of diabetic complications should also be emphasized.3
There is lack of diabetic awareness amongst health professionals across Asia, as many do not record the height/weight of their patients, nor do they check their body mass index (BMI). BMI has been shown to be a helpful indicator of obesity, which is a critical risk factor for diabetes. There is a need for the organization of specialized clinics for diabetes treatment and management in these areas of Pakistan. Diabetes awareness is deficient even in family members of the patient.4
A cross-sectional study done by Jafar TH, showed approximately of 50% correct and incorrect answers regarding the awareness of diabetes.5 Incorrect answers were related to monitoring of diabetics, insulin injections, glucose intolerance, insulin in pregnancy, importance of education in diabetics, and the complications of diabetes.5
Approximately one quarter of the Pakistani population is considered overweight. Approximately ten percent of the Pakistani population is considered obese. Obesity is one of the major risk factors behind hypertension, diabetes, and CAD's. Over one quarter of the entire Pakistani population is quantified as overweight.6
In a survey conducted via a quantitative study, most people said they thought diabetes was caused by stress, pharmacological therapeutics to outweighed those which can result from diet, exercise, and lifestyle changes, there was no need for further education about diabetes or education was not necessary until there was some sign of onset of diabetes.7 Diabetes was unrelated to health and arising from lack of faith or disturbances in spirituality.7
The objective of this study was to determine the baseline level of awareness of Diabetes Mellitus (irrespective of type 1 or type 2), amongst rural community at Tarlia, Islamabad, Pakistan. The other objective was to determine the baseline level of awareness of the risk factors and complications associated with Diabetes Mellitus (irrespective of type 1 or type 2).

A Cross-sectional Survey was carried out by students of Shifa College of Medicine Community at Tarlia (Rural Islamabad) during January 2008. Pre-designed pilot tested questionnaire was used. The questionnaire was translated into Urdu and back translated into English to ensure validity. All questins were asked in the local language. An adult was said to be aware of Diabetes if under his/her own capacity the adult positively responded to the question, "Do you know what Diabetes Mellitus is?" Lay man terminology of 'sugar' was used. The independent variables in the study were age, gender, educational status, family history of diabetes mellitus and regular visit to health care provider. The dependent variable was awareness level about diabetes, risk factors and complications. Sample size was calculated using EPI-info 6.0. Anticipated awareness level of community regarding diabetes mellitus was 20%. For 95% confidence interval and precision of ± 5%, the sample size came to 246. For contingencies the sample size was inflated to 300. Systematic sampling technique which is a form of Random sampling was used. In each street we surveyed the 1st household followed by 3rd, 5th and so on. Inclusion criteria for the study were adults of either gender, above the age of 18 years who gave informed consent. The information collected in the questionnaires was transferred to the SPSS version 10.0 statistical software. For quantitative variables (such as age) descriptive statistics in the form of Mean ± SD was reported. For categorical variables (such as gender, educational status, awareness level) frequency (percentage) were reported. The Chi-square test was used to investigate the association of awareness of diabetes mellitus with various independent variables. The level of statistical significance was p <0.05.
Ethical Considerations:
For the purpose of this study, two major principles were upheld: Shifa College of Medicine ethics review committee clearance was obtained. Written informed consent of all adults for participation in the survey was obtained. Confidentiality of the collected data was ensured.

The total sample size for this study was three hundred. The age distribution for the whole sample was 41 ± 15 years. Majority of them were males (63.7%). The distribution of educational status among the study participants is depicted in Table-1. A third of the adults had 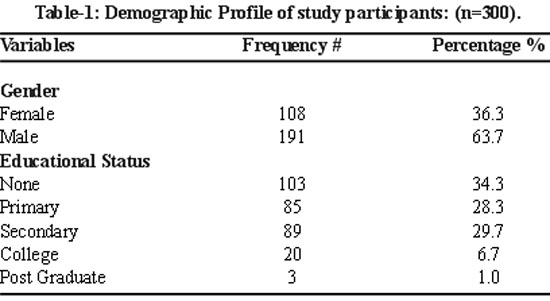 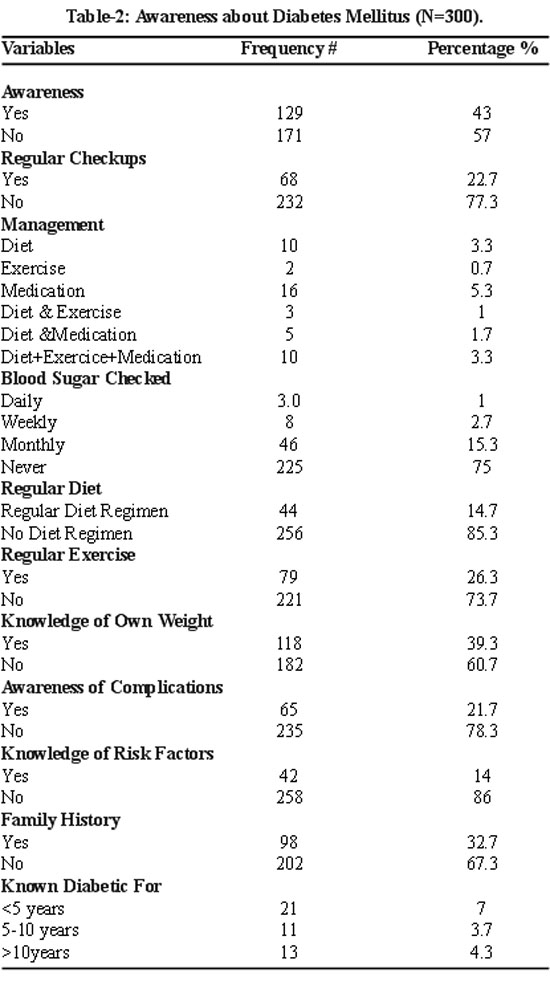 adults in Tarlai, but also the extent of that awareness. Although 57% of adults surveyed did claim to be aware of Diabetes Mellitus, 258 adults were unaware of any predisposing risk factors. In fact, 225 adults out of 300 have never had their blood sugar checked, while 182 people were unaware of their own weight and 256 adults had absolutely no regular diet regimen. Further, 235 adults were unable to say that they had any idea as to what the complications of Diabetes might be. This low level of community awareness is not surprising as 232 adults of 300 reported never went for regular checkups to any clinic or hospital.
Table-3 depicts the association between awareness level of Diabetes Mellitus and variables such as gender, educational status and a family history of Diabetes. This study found 48% females to be aware of Diabetes Mellitus and 40% of males to be aware, but this difference 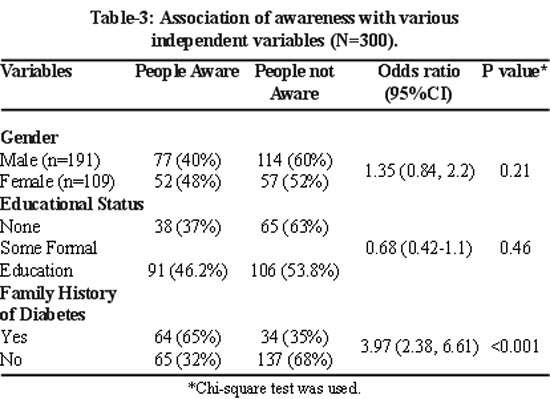 was not statistically significant (P=0.21). Although, people who had formal education had a higher lever of awareness (46.2%) compared to people with no formal education (37%), this difference was not statistically significant (p=0.46). A positive family history was found to be associated with the level of awareness, as 65% of adults with a family history were aware of Diabetes Mellitus, while only 32% of people without a positive family history were aware of the disease (P<0.001).

The data collected by our survey grossly indicates that a significant number of the population have little or no awareness of Diabetes Mellitus. Those who are aware only know the disease by the name "sugar," and have failed to hear the words "diabetes mellitus." Our results show that those awareness of the disease is due to an affected family member rather than the national education system. However, even these people failed to show any knowledge of the disease pathology itself, preventive measures they can take to reduce their risk of Diabetes, and the possible outcomes of the disease. Shockingly enough, even people who are currently diabetic, failed to give positive replies to some of these questions. It had previously been shown that the level of awareness was poor amongst adult diabetics.7 Almost five years later, this study has shown the same results. In another study, it was shown that adults had poor diets, refrained from physical activity, and sometimes even knowingly put themselves at risk for diseases such as diabetes, hypertension, and heart disease.9 Additionally, it was seen that amongst even the most populated city of Pakistan, the risk factors of diseases such as Diabetes Mellitus were rampant and the need for patient education and public awareness was dire.10
The study however gives clues that people who are regularly in touch with their health care providers for various health issues are more aware about Diabetes and its risk factors. This brings to attention the role of health care providers particularly the community practitioners in health education of their patients and the general community, about diabetes and other chronic diseases.
More shocking display of poor treatment compliance and disregard for health was shown in the study that showed there was a high prevalence of poor glycaemic control and atherogenic dyslipidaemia in Pakistani patients with type 2 DM. Most of these diabetics have poor knowledge of their disease and are unaware of its complications.11
Awareness about Diabetes Mellitus was found to be similarly low in a community based study in Malaysia.12 This study and similar other studies have shown undisputable evidence that regarding poor awareness level of diabetes. There were no studies found which could contradict the results of this study nor show more positive results when it comes to public awareness. The prevalence of diabetes has increased drastically in Oman over the last decade, while knowledge of diabetes was suboptimal.12 Attendees of a primary care center in eastern Saudi Arabia were found to have poor knowledge on DM risk factors and preventative measures.14 Education and age were found to be the most important predictors of knowledge.14

This study has shown that the rural communities of Pakistan are unaware about the risks and complications of Diabetes Mellitus. The majority of people who are aware of Diabetes are only so because a family member is affected. To raise the awareness of diabetes, a formal, structured approach should be designed to deliver the necessary educational information to the less developed areas of Pakistan, through mass media and outreach health education programmes. This could easily be accomplished by distributing pamphlets of information which could be handed out at small makeshift group stations set up on locations. In addition or alternatively, large public speaking sessions could be arranged addressed to the general public. This study has highlighted the need for both patient and public education regarding Diabetes Mellitus.

Cystic fibrosis in a child with situs inversus, a distinctively unusual association

The necessity of awareness of Breast Cancer amongst women in Pakistan