The larynx is a rare site of involvement of amyloidosis. We report two cases of laryngeal amyloidosis. Both patients were middle aged females with history of persistent hoarseness. Fibreoptic laryngoscopy used for diagnosis in both and debulking of the tumour was performed. Histopathological examination confirmed the diagnosis of amyloidosis. Appropriate follow up is an important part of the long term management of the disease.

Amyloidosis represents a heterogeneous group of disorders characterized by the deposition of amyloid protein in various target organs of the body. This ultimately leads to organ malfunction and failure.1 The disease process can affect virtually any organ of the body. However, the larynx remains one of the rarer sites of involvement of amyloidosis. We report two cases of laryngeal amyloidosis that presented with long standing hoarseness. This description is the first report of laryngeal amyloidosis from Pakistan, as concluded after our literature search.

A 31 year old female presented with a 5 years history of gradually developing, persistent hoarseness. She denied any history of current or previous smoking and alcohol use. Fibreoptic laryngoscopy showed both vocal cords to be mobile. However, a granulomatous growth on the right vocal cord was observed. CT scan of the head and neck showed a broad based polypoidal growth attached to the right aryepiglottic fold. (Figure-1) Tracheostomy followed by direct laryngoscopy and biopsy of the lesion were planned. Direct laryngoscopy revealed narrow glottic chink and a pedunculated smooth surfaced mass arising from the right ventricle / false cord. The tumour was debulked and submitted for histopathological examination. Deposition of amorphous pink material was seen in the underlying tissue. This material stained positive for Congo red and Sirius red stains and also demonstrated apple green birefringence on polarization. (Figure-2) Repeat fibreoptic laryngoscopy on the follow up visit showed adequate airway with fullness of the right false cord, true cord and subglottis. The patient was also investigated for signs of systemic amyloidosis. She was mildly anaemic (Haemoglobin: 10.9g/dl) with an ESR of 22 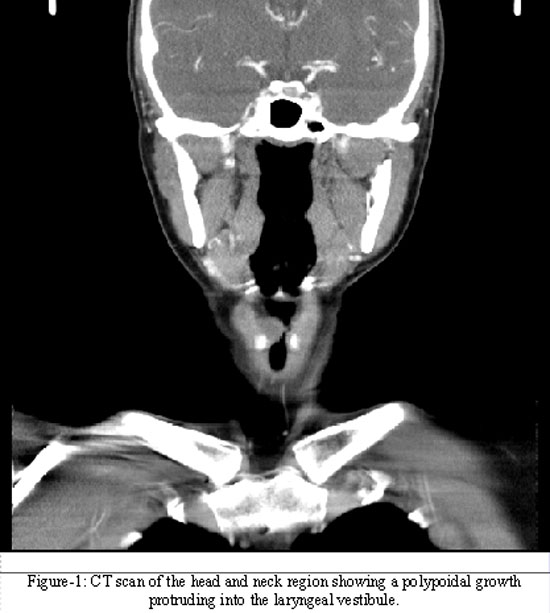 mm/hr; other haematological parameters were normal. Her liver function tests (SGPT, ALP, GGT and total bilirubin) and renal function tests (serum creatinine, creatinine clearance, 24 hour urine creatinine and spot urine creatinine) were all within normal range for her age and gender. Her most recent fibreoptic laryngoscopy showed adequate glottic chink and edematous right cord. She has been regularly followed up for 6 months now without 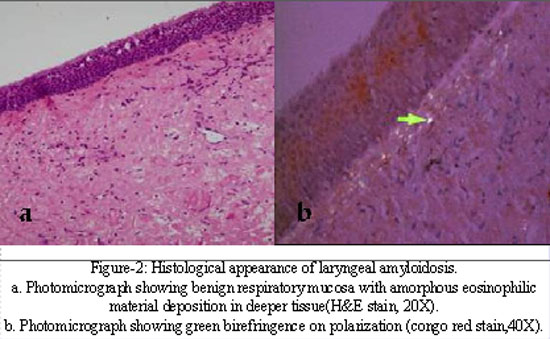 demonstration of recurrence.
The second case was a 55 years old diabetic and hypertensive lady who presented with a 2 years history of persistent hoarseness. Her personal history was not significant for any addictions including smoking, alcohol and smokeless tobacco use. On fiberoptic laryngoscopy performed in the clinic, both vocal cords were seen to be fully mobile with a small nodular growth on the left vocal cord. Direct laryngoscopy was performed under general anaesthesia which revealed a lesion arising from the left false cord. The lesion extended to the vestibule and was involving the anterior commissure. The abnormal growth was removed and submitted for histopathological examination, that showed deposition of amorphous pink material and stained positive for Congo red. CT scan of the head and neck had been planned but could not be performed because the patient was lost to follow-up. A limited laboratory work up of the patient was performed pre-operatively which did not show any abnormality. She had a normal haematological parameters (Haemoglobin=12g/dl) and normal renal and liver function tests. Systemic amyloidosis was therefore unlikely on the basis of normal physical examination and limited laboratory investigations.

Amyloidosis has a peak incidence in the fifth decade of life, with a male to female preponderance of 3:1. Clinically the disorder can either be localized or systemic.1 Systemic amyloidosis is further classified into primary, secondary and familial forms.2 Both of our patients were female and in their fourth and sixth decade of life respectively.
The head and neck region is a frequently reported location for the occurrence of amyloidosis. In one review, it was seen that approximately 19% of amyloid cases occurred in the head and neck region.3 Cases of amyloidosis have been reported in the tonsils, oropharynx, nose, nasopharynx, paranasal sinuses, oral cavity, tongue, tracheobronchial tree, orbit, thyroid gland and parotid gland.1,3-5 Laryngeal amyloidosis remains a rare entity accounting for about 1% of all benign laryngeal tumors.1 Within the larynx, a number of sites can be involved including ventricular folds (55%), laryngeal ventricle (36%), subglottic space (36%), vocal folds (27%), aryepiglottic folds (23%) and anterior commissure (14%).1
While reviewing local literature, we came across reports of amyloidosis occuring in the form of primary localized cutaneous amyloidosis6 and amyloidosis leading to nephrotic syndrome.7 No case of laryngeal amyloidosis has been reported from Pakistan so far. Lack of appropriate diagnostic facilities may be one hurdle causing under-reporting of laryngeal amyloidosis specifically and low incidence of amyloidosis in general from this region.
Laryngeal amyloidosis can present in a variety of ways. These presentations include hoarseness, dysphagia, dyspnoea and stridor.1,8 Hoarseness has been reported as a frequent presentation. Literature review also revealed that almost all the cases of laryngeal amyloidosis presenting with hoarseness reported harbouring this complaint for a period of at least one year. Our patients also presented with a more than one year history of hoarseness.
Isolated lesions seen in the larynx raise the suspicion of a malignant neoplasm.9 This warrants imaging, detailed visualization and biopsy of the lesion to rule out any underlying sinister process. CT scan of the head and neck could only be performed in one of our patients as the other was lost to follow-up. However, definitive diagnosis in both patients was carried out through biopsy. Histology of the specimen using haematoxylin and eosin stain showed amyloid as eosinophilic extracellular infiltrate. When the sample was subjected to Congo Red Dye under polarizing light microscopy, the demonstration of green birefringence helps clinched the diagnosis. It can also be confirmed by the negative potassium permanganate proteolysis test. Electron microscopy reveals a typical fibrillar structure of amyloid while x-ray crystallography and infrared spectroscopy show the characteristic cross beta-pleated sheets.1,10
It is important to classify amyloidosis correctly because it influences the choice of treatment, prognosis and other important parameters.10 A systemic work up of patients with laryngeal amyloidosis should therefore be undertaken after making a diagnosis of amyloidosis. The complete, exhaustive workup includes a complete blood count, a peripheral blood smear, measurement of electrolytes and BUN/creatinine levels, liver function tests, urinalysis, electrocardiography, echocardiography, and a radiographic skeletal survey. Other target organs such as digestive tract and lower respiratory tract should also be similarly assessed. This holistic workup is helpful in exclusion of chronic systemic disorders such as multiple myeloma, tuberculosis and rheumatoid arthritis.1 However, Ergas et al have advocated a limited work up of systemic involvement in patients with symptomatic amyloidosis of the airways because of its rarity. This includes urinalysis, serum and urine protein electrophoresis and bone marrow aspiration in patients without any clinical signs of systemic involvement.8
It is important to treat laryngeal amyloidosis because untreated cases can progress to vocal fold fixation, severe dysphonia, and airway obstruction. Treatment of localized laryngeal disease is primarily surgical excision with or without tracheostomy to secure the airway.11 Alternatively, "expectant" management with no intervention may be indicated in certain carefully selected cases, owing to the slow progression of the disease over many years.12 Other treatments options that have been described include corticosteroids, radiotherapy, and agents like colchicine and melphalan. However, these modalities have yielded variable results.11
An important component in the management of laryngeal amyloidosis is the scheduling of frequent follow ups. It is imperative to maintain vigilance for local and distant relapses and recurrences.1 More than 50% of patients have been reported to suffer from recurrent or multifocal local disease that required repeated surgical procedures.8 An approach combining laryngoscopy and MRI/CT has usually been advocated for follow up. One of our patients has been regularly returning for follow ups without any signs of recurrence of disease.
Amyloidosis must be considered an important differential diagnosis for lesions of the laryngeal region. The variety of presentations of laryngeal amyloidosis as well as their protracted temporal associations must be borne in mind by the otorhinolaryngologist for a prompt diagnosis and appropriate subsequent management to prevent the acute and chronic local complications of the disease.
Conflict of Interest
The authors declare no conflict of interest.

Imaging findings in a neglected case of chronic otitis media