The pattern and distribution of malignancies reported in Hadramout, Yemen - 2006

Objectives: To describe the pattern of malignancies among all patients with cancer recorded in Hadramout (East of Yemen) in 2006, and to explore the association with age, sex, and site of cancer.
Methods: A retrospective descriptive study of all registered cancers (334) was carried out. Efforts were made to avoid case duplication. The neoplasms had been classified according to international classification of diseases for oncology.
Results: The cancers were more frequent in females (55%) than males (45%). The three most affected sites were digestive organs (20.35 %), breast (14.37 %), and haematopoietic system (11.98 %). In the paediatric group, haematopoietic system (leukaemia) was most common.
Conclusions: Digestive organs in general, with breast in females, were the most frequent sites of malignancies. Colorectal cancers were the most common cancers in digestive organs (JPMA 59:774; 2009).

Cancer is still one of the major health problems worldwide with increasing frequency, especially with increased modernization, increased exposure to radiation and predisposition to large number of carcinogenic agents.1
In 2004, cancers accounted for over 7 millions deaths (13% of total mortality) and there were more than 10 million new cases worldwide. More than 60% of cancer deaths and approximately half of new cases occurred in developing regions.2,3
Profound demographic, socioeconomic, and behavioral changes have taken place in Eastern Mediterranean Region over the past three decades. Longevity has progressively increased, and there has been steady shift from traditional and rural ways of life to more urbanized and modern lifestyle. With modernization, life styles linked with physical inactivity, smoking, and new eating habits have emerged which promote non communicable diseases, including cancer.4
There is a significant variation in the distribution of site-specific cancer mortality and incidence by region.3 In India the genital tract cancers are the largest overall group of cancers.5
In Saudi Arabia, gastrointestinal tract malignancies are the commonest type of cancers followed by Hodgkins disease, Nonhodgkin lymphoma, and thyroid cancer.6
The republic of Yemen lacks a national cancer registry and there are no reliable data available. However if we consider the WHO recommendation for estimating cancer incidence (100 per 100000 for countries with more than half of the population under 20 years of age), the number of new cases in Yemen should be around 16000 annually.7
Many studies conducted in Yemen revealed that the commonest type of cancer was gastrointestinal tract malignancies followed by lymph node cancer and head and neck malignant tumours.7-9
The aim of this study is to describe the pattern of malignancies among all patients with cancer recorded in Hadramout, 2006, and to explore association with age, sex, and site of cancer according to the international classification of disease (oncology).

This retrospective descriptive study was carried out in Hadramout governorate at east of Yemen by collecting up data from four sources: two were histopathology centers (national center for public health laboratory-Hadramout sub-office, and medical Andalos laboratory center - private), the other two sources were not histopathology centers (Register of treatment abroad of the ministry of public health, Hadramout branch, and department of drug supply, health office, Hadhramout).
The study included all malignant cases diagnosed from January to December, 2006. The patient's name, sex, age, diagnosis, site of tumour, governorate, and source of data were fed into computerized data sheet (Excel), and a numerical code was given for each source.
Efforts were made to avoid case duplication. If the repetition was found between histopathology and non-histopathology sources, the histopathology source was fixed and the other was removed. If the repetition was found in non-histopathology sources, the more complete data was fixed and the other was removed. Out of the total collected cases (423), 89 cases were deleted and the final number of cases included was 334.
The neoplasms had been coded and classified according to the international classification of diseases for oncology (ICD-O, 3rd edition). The patients were divided into seven age groups, according to their ages (with class interval = 15 years). Paediatric malignancies were separated (< 15 years), according to site of cancer.
The neoplasms were arranged at first according to the main topographic classification of tumours and then re-arranged by using sub-classification to specify the most affected site in both males and females. The data were analyzed to find percentage, means, and standard deviations. The results of our study were compared with other local, regional and international studies.

In the one year study period (2006), a total of 334 malignant tumours were analyzed. The total number of cases histopathologically diagnosed was 277 (83%) There were 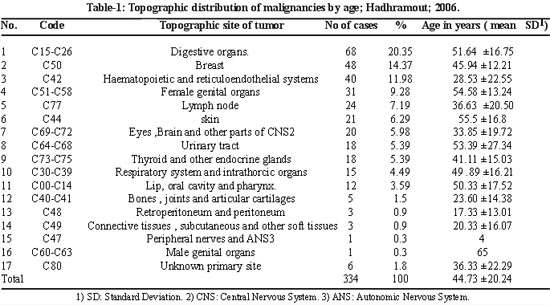 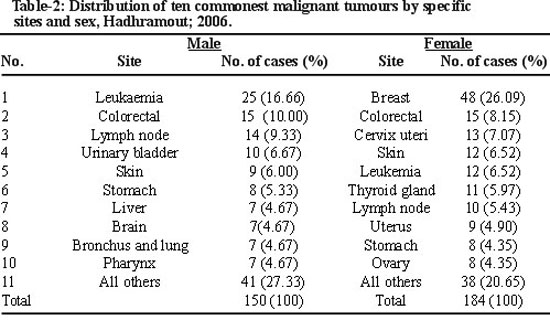 This study was performed to give a base line description of pattern of the malignancies recorded in Hadramout through information registered in institution/pathology-based registries. These registries are not population-based cancer registries, but are the only sources of information available to give us a basic idea about the picture of cancer distribution. Many difficulties were faced in the interpretation of the results due to undetailed history and histopathological diagnosis which limit the study.
The results of our study showed that the malignancies were more frequent in females (55%) than in males (45%), and this is similar to a study carried out in south-eastern governorates of Yemen.
The first five organs in our study were digestive organs, breast, haematopoietic and reticulo-endothelial system, female genital system and lymph node malignancies and this is a similar pattern to what was quoted by other studies.6,7,10,11 In another study performed in Sana,a (capital of Yemen) revealed that the breast and female genital system malignancies ranked the seventh and eight respectively, and this difference may be due the fact that reported cases from referral hospitals in Sana'a were not representative to all cancer cases in Yemen (Table-3). Skin cancer ranked sixth in this study comparable with other studies.6,9

Unlike our study, other studies revealed low incidence of central nervous system malignancies.7,9 This difference can be accounted by undetailed histopathological diagnosis of brain tumours and other parts of the central nervous system, which cannot differentiate between benign and malignant tumors.
Urinary tract malignancies constituted the 8th common cancer in the current series, which is comparable with that found in South-Eastern governorates of Yemen.7
Thyroid gland cancers constituted the 9th common cancer which is comparable to other studies.7,9 Like other studies, our study revealed that the thyroid cancer was more frequent in females than males.12,13
Incidence of respiratory system and intra-thoracic malignancies is low in comparison to other studies which showed high incidence of these malignancies.11
Regarding old age, male genital system, skin, and digestive organs malignancies were seen in an older age; a comparable finding with other studies.6,7,9
In males, the incidence of male genital system malignancies (including prostate cancers), like other Arabian Gulf and Asian countries, is very low compared to Western countries despite the high intake of calories and high consumption of animal fat.7,10,14
Among females, the malignant tumours of the breast were the most frequent as reported almost in all studies carried out in Yemen.7,9,15 Internationally, also, the most common malignancies in females are of breast, in both developed and less developed regions, while in South central Asian countries, cervical (uterine) tumours are reported to be most frequent followed by breast tumours.10
Colorectal carcinomas were the most common malignancies of digestive system followed by stomach and esophagus cancers. Comparable findings were found in several studies in Yemen, Saudi Arabia, and Pakistan.8,16-17
In children under 15 years of age, the haematopoietic and reticulo-endothelial systems malignancies (leukaemia) were the commonest type of tumour, and this in accordance with that found in Pakistan.10
The age group between (46-60) years is the most affected age group, which is similar to other studies.7
The five most common cancers in males (by specific site) were leukaemia, colorectum, lymph node, urinary bladder, and skin cancers. A comparable distribution as found in Pakistan.10 In females, the five most common cancers were breast, colorectum, cervix uteri, skin, and leukaemia, and this distribution is also comparable to a Pakistan study.10
About (86.52%) of patients were from Hadramout followed by patients from Shabwa and Al-Mahrah. This does not indicate that the incidence of cancer is lower in those governorates. It can be attributed to in-accessibilities to health care facilities and cancer registry.

The most common type of cancers found in our study was in general cancer of digestive system and in females was breast cancer while in children under 15 years of age was cancer of haemtopoietic system (leukaemia). Cancers were reported frequently in the age group of 45-60 years with high frequency in females than males.