Frequency of menopausal symptoms and their impact on the quality of life of women: a hospital based survey

Objectives: To asses the menopause related symptoms and to determine the impact of these symptoms on the quality of life of menopausal women.
Methods: It was a cross sectional hospital based survey conducted at the department of Obstetrics and Gynecology Isra University Hyderabad Sindh Pakistan from November 2007 to August 2008. Two hundred two women of age 40-60 years, who presented in out patient department were included. Women with induced menopause, receiving hormonal treatment, having medical problems like thyroid disorders, diabetes mellitus and hypertension and those who refused to participate were not included. Menopause specific quality of life questionnaire (MENQOL) was used to assess the frequency and severity of symptoms. Mann- Whitney U test and Pearson Co-efficient of correlation was used for statistical analysis. P value < 0.05 was considered significant.
Results: Mean age of women was 52.17 ± 6.019 years. Mean length of time since menopause was 8.39 ± 6.0 years. Most prevalent symptom within study subjects was body ache 165 (81.7%). Frequencies of some classical symptoms were 134 (66.3%) reported "hot flushes", 139 (68.8%) and 134 (66.3%)   reported "lack of energy" and decrease in "physical strengths" respectively. The less frequently reported symptom was increase in facial hair 20 (9.9%). Scores of Physical domain were significantly more in postmenopausal (PM) group P< 0.002 while the scores of psychological domain were significantly high in menopause transition (MT) group P< 0.003.
Conclusion: Menopause related symptoms had negative affect on the quality of life of postmenopausal women (JPMA 59:752; 2009).

Menopause is the time in a woman's life when her periods stop. It happens because the woman's ovary stops producing estrogen and progesterone hormones. It occur often after the age of 45 years, but the symptoms including change in periods, shorter or longer, lighter or heavier with more or less time in between, hot flushes, and or night sweats, trouble in sleeping, vaginal dryness, mood swings, trouble focusing, less hair on head and more on face can start several years earlier.1
With the general increase in life expectancy, many women are likely to live for more than 20 years after menopause, spending about one quarter of their lives or more in a state of estrogen deficiency.2 Owing to lack of estrogen woman may experience decrease physical and mental well being that's why postmenopausal woman can be considered a risk population.3,4
The overall health and well being of mid-aged women has become a major public health concern around the world. More then 80% of women experience physical or psychological symptoms in the year approaching menopause with various distress and distribution in their lives, leading to decrease in quality of life.5
World Health Organization defines Quality of life (QoL) as an individual's perception of their position in life in the context of culture and values system in which they live and in relation to their goal expectations, standards and concerns.6
The study of QoL in the post menopause has become an essential component in clinical practices. Most studies on QoL of postmenopausal women were conducted in developed countries with different sociocultural realities, which may influence not only the perception of QoL but also the experience of menopausal symptoms. Very little information exists about QoL of postmenopausal women in developing countries.
Given these various contributions, we conducted the current study to determine the menopause related symptoms and their impact on quality of life in postmenopausal women of our region.

This cross sectional survey was conducted between November 2007 to August 2008 in the out patient department of Obstetrics and Gynecology at Isra University hospital. Subjects were selected from women age 40 to 60 years. Women with induced menopause, simple hysterectomy, premature menopause, receiving any kind of hormone therapy, presence of medical conditions like diabetes, hypertension, cardiac disease, and thyroid disorders were not included in the study. A total of 202 women constituted the present study sample.
Data included sociodemographic information, menstruation status based on reported length of time since last menstrual period and the experience of symptoms, as tested in Menopause Specific Quality of Life (MENQOL) questionnaire.
MenQoL consists of 29 items. All items followed the same format. Each woman was asked whether she experienced   the symptoms in the previous six months, if answer was no she was asked next item and if answer was yes she was asked to indicate how bothered she had been by the symptoms on a 7 point scale ranging from 0=not at all bothered to 6 extremely bothered.
For analysis score becomes 1 for "No", 2 for "Yes" through to 8 for "Yes (Extremely bothered)".
Menopausal status was determined based on the reported length of time since last menstrual period. Women who reported still having normal menstrual cycles or with slight change in the length of cycle were classified as menopause transition (MT), while women whose last menstrual period occurred 12 months or more ago were categorized as post menopause (PM).
All data gathered was analyzed by using Statistical Package for Social Science (SPSS) Ver. 16.0. Quality of life (QOL) score for each item and domain are presented as mean ± standard deviation, and median with quartiles. Demographic features and symptoms are reported as frequency and percentages. Mann-Whitney U test was used to compare the QOL score among (Menopausal transition) MT and postmenopausal (PM) group. Pearson coefficient of correlation was calculated with each domain of MENQOL. A p-value less than 0.05 were considered as statistically significant. 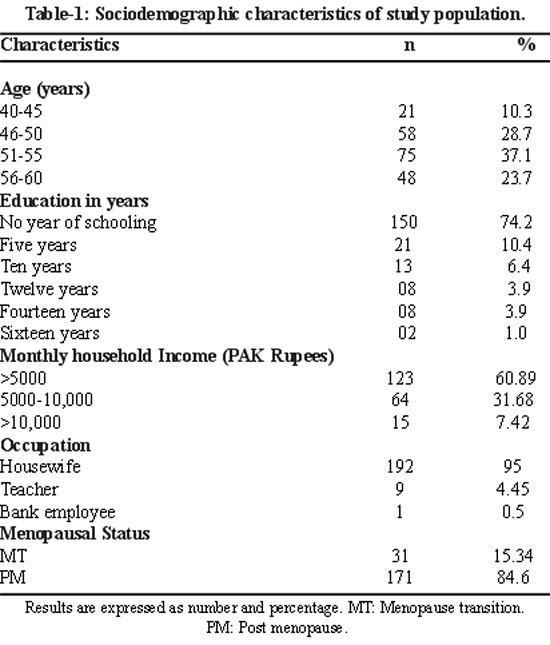 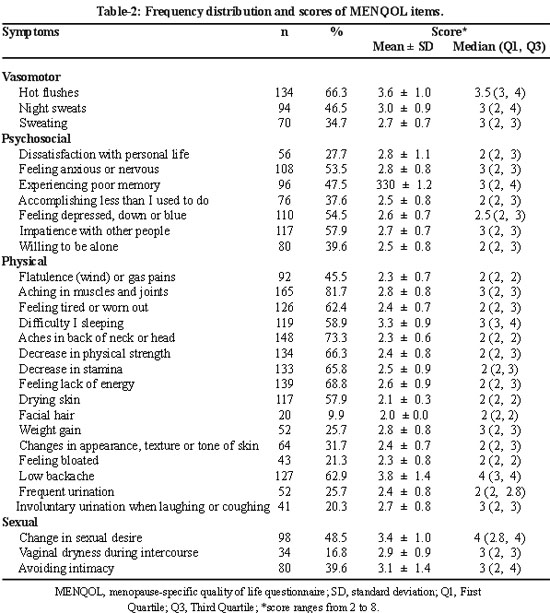 Menopause has emerged as a prominent issue in the women's health. We evaluated the quality of life of woman with menopausal symptoms on MenQoL. MenQoL was developed in 1996, consisting of four domains: Vasomotor, Psychological, Physical and Sexual. MenQoL has been applied in Europe,7 China and some other developing countries.8,9
The frequencies of menopausal symptoms in our study population were much high than those found in several other studies.10-12
In United States,13 African-American women reported hot flushes most frequently (45.6%) followed by Hispanic (35.4%), Caucasians (31.2%), Chinese (20.5%) and Japanese (17.6%). In our study 66.3% of women reported hot flushes, almost similar results were reported from Sydney and Holland14,15 and another study from the same region reported frequency of hot flushes (55%).16
The prominent reported symptom in our study was body ache/joint pain, similar results were reported by several studies conducted in Asian women.16,17
According to our study frequency of vasomotor symptoms was 71% and that of psychological symptoms was 96%, higher then reported frequency from China18 52% and 90% respectively, but almost similar to frequencies reported from Thailand that are 72.3% and 98.3% respectively.19
The frequency of physical and sexual symptoms in the present study was 99% and 66% respectively, similar findings were reported from China,21 but much higher to study from UAE that is 69% and 37% respectively.2
Prevalence of menopausal symptoms was found to be relatively low in Asian women compared with western women.20,21
A study from USA,22 reported significant differences in frequency of symptoms across ethnic groups In this study Caucasian women were found to have more symptoms in all domains specially the psychosomatic symptoms then other ethnic groups, overall the frequency of vasomotor symptoms was high in African-American woman but the difference was found according to ethnicity. Chinese and Japanese American reported significantly fewer symptoms then the Caucasians, Africans-Americans or Hispanics.23
The reasons for these different frequencies can be many. The high proportion of phytoestrogen content of Asian diet seems to prevent against menopausal symptoms. However not all studies have observed uniformly lower symptoms in Asian countries.24
Menopausal symptoms are also influenced by sociodemographic/sociocultural factors, economical stresses, general health status and individuals perception. Apart from ethnic and other demographic divergences, the different designs of the studies, sample size, age range, distribution of menopausal status of participants and the instruments used may also account for discrepant findings.
In our study PM woman had significantly higher scores in physical domain then MT group P<0.002, while the scores of psychological domain were significantly high in MT group then in PM (p < 0.003).
A study from Thailand showed many symptoms to be significantly related to MT status (such as hot flushes, upset stomach, insomnia, and urinary symptoms) only night sweats and joint aches and pains were significantly associated with PM status.25
Other studies reported that vasomotor complains were more prevalent in MT woman whereas psychological complains were more in PM women.21
There are several limitations with the present study. First this survey was cross sectional hospital based having small sample size, might not reflect the situation of community. Second the MENQOL questionnaire is a self reporting questionnaire, women were asked to provide some retrospective information such as climacteric symptoms experienced in the preceding weeks, regularity of menstruation and last menstrual period, hence recall bias is unavoidable especially in some elderly women. Third we had a small number of women in MT group as compared to PM women. It may be the reason for achieving statistically insignificant difference in the mean scores, in vasomotor and sexual domain of MENQOL.

The mean score of each domain suggests that menopausal symptoms were associated with decrease in quality of life in our study population. Further investigations are required to be conducted in the community with larger population in different areas of the region.