Objective: To determine the obstetric causes for stillbirth in low socio-economic settings.
Methods: A case-control retrospective study through data analysis was conducted at a tertiary university hospital, from January to June 2008. All pregnant women diagnosed with stillbirth after 28 weeks of gestation were included in the study. They were compared with women who had live birth during the study period. Both groups were identified from the admission, and labour room registers. The risk factors studied were maternal age, parity, gestational age, hypertensive disorders of pregnancy, antepartum haemorrhage, obstructed labour and Prematurity. Stillbirth was defined as foetal death after 28 weeks of gestation.
Results: Of the 1011 deliveries in the selected period, there were 100 still births (98/1000 deliveries). Both nulliparity and grand multiparity were significantly associated with stillbirths (p < 0.003 and p < 0.009 respectively). From the binary logistic regression analysis, obstetric factors which were significantly associated with stillbirth were obstructed labour ( OR 16.2, CI 5.5-47), hypertensive disorders (OR 9.6 CI 4-23), abruptio placentae ( OR 136, CI 52-356), placenta previa ( OR 71, CI 21-230), and preterm labour (OR 15 CI 4-54). Gender was not found significantly associated with stillbirth (p < 0.432)
Conclusion: Majority of stillbirths were due to risk factors which can be identified in the antenatal period. (JPMA 59:744; 2009).

Maternal and perinatal mortality figures are representative of available health care facilities. World-wide perinatal deaths are responsible for 7% of total global burden of disease.1 Majority of these deaths occur in poor developing countries. The perinatal mortality from two provinces of Pakistan has been quoted to range between 62-92/1000.2 Most of the studies from Pakistan are hospital based; hence actual figures are not available.
The stillbirth rate for developed countries is estimated between 4.2 to 6.8 per 1000 births, whereas for the developing world, the estimate ranges from 20 to 32 per 1000 births.3 The etiological factors for stillbirth are also different in developed and developing world. The rate of stillbirth during labour is 1 in 1000 in developed world, whereas it is 1 per 100 births in developing world.4
The primary obstetric causes identified and modified for developing world include antepartum haemorrhage, hypertensive disorders, preterm labour, infections, obstructed labour, cord accidents, foetal abnormalities and unexplained deaths.5,6 These etiological factors lay importance on provision of antenatal care facilities. Moreover, majority of these factors are preventable and call for more concentrated efforts on part of health care providers.
This study from a public sector hospital in the Sindh province presents obstetric determinants of stillbirth.

This study was done at the Department of Obstetrics & Gynecology Unit 3, Civil Hospital and Dow University of Health Sciences, Karachi, Pakistan. Civil Hospital Karachi is a tertiary referral center, and receives referrals from public hospitals of two provinces, Sind and Baluchistan. Majority of the women are non-booked. Total number of deliveries during the study period intending from January to June 2008 were 1011. It was a case-control study. Cases were women who had delivered stillborn foetus during the study period, and controls were women who had live births during the same period. Both groups of women were identified from the labour room admission and delivery registers. Cases and controls were compared for clinical risk factors which are associated with stillbirth in literature. Foetal death or Stillbirth was defined as death of the foetus after 28 weeks of gestation.
The variables which were collected for both group of women included maternal age, parity, history of miscarriages, gestational age, clinical risk factors for stillbirth including preterm labour, placenta previa, abruption placenta, obstructed labour, pregnancy induced hypertension, and eclampsia. Foetal variables included gender and weight. Women with multiple gestations were excluded.
The study was approved by hospital ethics committee.
Data were initially analyzed descriptively using SPSS (ver 16.0). 't' test was employed to detect the significant difference between mothers' age, baby weight and gestational age with still birth or live birth. Spearman correlation was used to determine the significant risk factors for stillbirth. Binary logistic regression was employed to find out the risk assessment model, using Ward Forward method, for stillbirth with significant risk factors obtained by Spearman correlation.

During the study period there were a total of 1011 normal vaginal deliveries in the department, of which there were 100 foetal deaths, giving the rate of stillbirth as 98 per 1000 deliveries.
The mean maternal age among control group of women was 26.2±5.0 years, compared to 28.1 ± 5.8 years for women who had stillbirths. The difference was statistically significant (p = 0.003). Both primiparous and multiparous women were found to be at increased risk for stillbirth, p < 0.003 and < 0.009 respectively. The mean gestational age for cases and controls were 34.5 ± 3.8 weeks, and 36.9 ± 1.4, respectively. The difference was statistically significant (P<0.005). Gender was not found significantly associated with stillbirth (p = 0.432). The mean birth weight of two groups was 2.88 ± 0.56 gm and 2.403 ± 0.91 gm for cases and controls, respectively. Spearman correlation showed age,

parity, gestational age, obstructed labour, hypertensive disorder, cord prolapse, abruptio placentae, placenta previa, preterm labour, gestational diabetes, ruptured uterus, foetal distress and weight of the baby. The binary logistic regression results are shown in Table-1. The final model did not include the age as the risk factor. Except gestational age and weight of the baby, all the included variables showed positive coefficient in the model. The significantly maternal risk factors were 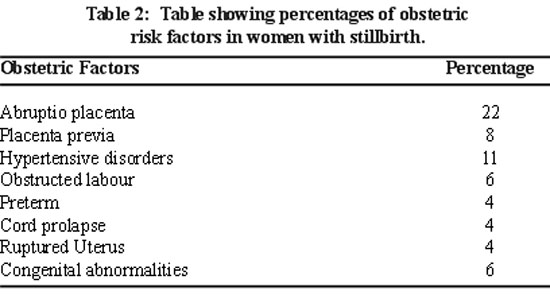 The above study was aimed at identifying the antepartum and intrapartum risk factors for stillbirth. It was a retrospective case controlled study, in group of women who were referred to the unit for delivery. Majority of the women did not have any antenatal examinations.
The mean maternal age in women having stillbirth was 28 years, whereas it was 26 years in control group of women. Maternal age has been identified as risk factor for both antepartum and intrapartum stillbirth. Though it was not significant in above study, advanced maternal age has been found to be associated with adverse pregnancy outcome.7 This has been attributed to increased risk of medical complications, poor placental development leading to intrauterine growth restriction. Similarly risks for intrapartum stillbirth has also been found to be greater in teen mothers.8 Parity has been found to be significantly associated with stillbirth. In our study both primiparous and multiparous women were found to be significantly at increased risk for stillbirth. Aliyu MH et al, in their study of 27,069,385 births, including 1,206 women found that the risk for stillbirth is substantially elevated among very high and extremely high parity women, (OR 1.97, 95% CI 1.81-2.15 and OR 2.31, 95% CI 1.56-3.42 respectively), and suggested that care providers may consider these groups for targeted periconceptional counseling.9 This study was conducted in the developed world, and it was hypothetized that the cause was uterine exhaustion syndrome, where the organ has been overused and thus fails to provide good intrauterine environment for foetal growth. For the developing world, the concept is of maternal depletion syndrome, where repeated pregnancies are responsible for the poor nutritional status of the mother, leading to adverse pregnancy outcome.10
Antepartum haemorrhage (APH) including abruption and placenta previa were responsible for 30% of stillbirths. In another hospital based study from the same settings, APH was responsible for 20% of perinatal deaths.11 Antepartum haemorrhage has been identified as an important cause of stillbirth in other studies also.12 Though placental abnormalities cannot be modified to improve the perinatal outcome, identification in the antenatal period, and early referral to tertiary hospitals, can decrease the associated maternal and perinatal morbidity and mortality associated with APH. This was followed by hypertensive diseases, responsible for 11% of stillbirths. In a large WHO trial, involving seven developing countries, hypertensive disorders of pregnancy were responsible for 28% of stillbirths, following Prematurity as the most common cause of stillbirth.13 In another large population based study women with any form of hypertension in pregnancy were 1.6 (95% CI 1.5-1.6) times more likely to have a live birth with SGA(small for gestational age) and 1.4 (95% CI 1.1-1.8) times more likely to have a stillbirth as compared to normotensive women.14 Hypertensive disorders of pregnancy lead to small for gestational age and preterm labour, resulting in increased chances of stillbirth. In above study, mechanical causes like obstructed labour, cord accidents and ruptured uterus were responsible for 14% of stillbirths. This is an indicator of poor antenatal care and late referrals to the hospital. Congenital abnormality was responsible for 7% of stillbirths in our study. In another study from University setting in Sindh, the rate of congenital abnormalities among stillborn was 16%.15 In developed world, where antenatal care is optimum, congenital abnormalities are an important cause of stillbirth. In 11% of cases, no obstetrical, foetal or placental cause could be identified as the etiological factor for stillbirth and were classified as unexplained. Vaginal delivery was the main route of delivery (48%), followed by abdominal delivery in 40%. We did not find any gender bias towards stillbirth in our population. Though in a previous study from Balochistan province, male foetus was found to be at an increased risk for stillbirth.16
There are limitations of the presented study. It is spread over a period of six months, but it gives an idea of the prevailing situation in the set-up. There was no available published data from the region to compare, if the situation had improved or not over the years. The study calls for intervention in the antenatal period, as management of diseases like hypertension in pregnancy, which can bring down the stillbirth rate. Early referrals can decrease the rate of stillbirth from mechanical causes like obstructed labour and ruptured uterus. Similarly, a recent study by Bhutta et al, showed the importance of intervention at community level decreasing the rate of stillbirth significantly.17 This study involved lady health workers of the government, who received additional focused training on maternal and neo-natal care, and were linked to local daais or trained birth attendants. This proves that changes in perinatal mortality rates can be brought about, without incurring extra budget.