Breast cancer is a major medical problem with significant public health and societal ramifications and is a leading cause of Cancer death in women. Breast carcinoma is the most common malignant neoplasm, with more than a million cases occurring worldwide annually.1
Several risk factors for the development of breast cancer have been established, and been proposed that the common denominator for most of these factors is prolonged estrogen stimulation operating on a genetically susceptible background.2 Numerous studies suggest a strong link between the female hormone, estrogen, and the development of breast cancer. There is two to three times increased risk of breast carcinoma if a first degree relative has breast cancer.3 Early menarche, nulliparity, late age at first birth and late menopause are all correlated with increased risk.4 According to some old studies, exogenous hormone intake increases overall risk to 2.5 fold.5 More recently, a large cohort study and a case control study have provided strong evidence for a greater increase in breast cancer risk in women using hormone replacement therapy than in those using estrogen alone.6 In December 2002, the hormone estrogen was declared a known human carcinogen by the National Toxicology Program. Presence of hormone receptors in tumour tissue correlates well with response to hormone therapy and chemotherapy.7
Determination of estrogen and progesterone receptors status is helpful in selecting the patients most likely to receive benefit from endocrine therapy, and provide prognostic information on recurrence and survival since their expression is related to the degree of the tumour differentiation. The highest response rates to endocrine therapy are observed in tumours, which are positive for estrogen and progesterone receptors.8 Those patients with receptor positive tumours who do suffer a recurrence usually do not have aggressive liver or central nervous system involvement and they more commonly experience a relapse in bone and soft tissue.9
The HER-2/neu proto-oncogene is amplified and as a result over expressed in 25% to 30% of human breast cancer and is usually associated with tumour aggressiveness and poor prognosis.10 In breast cancer, several studies identified the value of analyzing HER-2/neu as an approach to predict the response of individual tumours to chemotherapy as well as in the use of recombinant humanized antibodies (transtuzumab) to the HER-2/neu protein in the active management of patients with metastatic breast disease.11
Studies show significant concordance of ER and PR expression between primary and metastatic breast carcinoma to axillary lymph nodes.12-15 However there is slight decrease in expression of these biomarkers in the metastatic tumours. This effect may be due to tumour heterogeneity, a well-known fact in anticancer chemo sensitivity, and may be reflected in hormonal receptor status of metastatic breast carcinoma. Neoplastic cells from high-grade tumours may also loose estrogen and progesterone receptors during the process of metastasis. HER-2/neu expression, however, remains almost same in primary and metastatic breast carcinomas.16,17 The presented study compares the expression of these biomarkers between primary and metastatic breast carcinoma.

One hundred patients of breast carcinoma with lymph node metastases were selected for study from June 2004 to September 2006 at pathology department Shaukat Khanum Memorial Cancer Hospital and Research Centre, Lahore, Pakistan. Mastectomy specimens of patients having primary tumours and involved lymph nodes were included in the study. Poorly preserved specimens were excluded. ER, PR and HER-2/neu immunohistochemical stains were performed on primary and metastatic breast tumours. Patients' information was collected on a Performa.
Mastectomy specimens were sliced and fixed in 10% buffered neutral formalin. Size of the tumour was recorded and representative sections were taken from primary tumours. Lymph nodes were dissected out from axillary tissue and submitted. Sections were processed, cut and stained with haematoxylin and eosin. Appropriate sections from primary and metastatic tumours were selected for ER, PR and HER-2/neu immunohistochemical stains. Thin sections (4 µm) were cut. Immunohistochemical stains were performed according to manufacturer's specifications.
Reporting criteria: A "quick score" method18 was used for the quantification of Estrogen and progesterone receptors. The quick score categories were based on both the intensity and the proportion of brown nuclear staining. Two categories A and B were made. In category "A" the proportion of positive cells was assessed and scores were assigned from 1-6 according to percentage of positive cells (1= 0-4%; 2=5-19%; 3=20-39%; 4=40-59%; 5=60-79%; 6=80-100%).
The whole section was scanned at low power in order to assess the general level of intensity throughout. The average intensity corresponding to the presence of negative, weak, intermediate and strong staining, was given a score from 0-3 respectively, and termed as category B. Category "A" was multiplied by category "B". A score of 0 to 18 was obtained. The score equal or more than 3 was considered as positive.
HER-2/neu was considered positive if more than 10% cells showed moderate or strong complete membranous staining. Weak, incomplete membrane staining or cytoplasmic staining was considered negative.
Data Collection: ER, PR and HER-2/neu immunohistochemical stains were performed on primary and metastatic breast tumours. Information was collected on a Performa. Patient's name, age, histology numbers, size of primary tumour, type of primary tumour, grade of tumour, number of involved lymph nodes, size of largest metastatic deposit and expression of ER, PR and HER-2/neu on primary and metastatic tumour were recorded. Later on a master data sheet was developed and all the information was entered.
Statistical Analysis: The comparison of the distribution of histopathological characteristics between primary breast and metastatic breast tumours was made using Fisher's exact test for all biomarkers; estrogen receptors, progesterone receptors and HER-2/neu. The exact Wilcoxon rank-sum test was performed for quantitative variables. All statistical tests were two sided. All results were judged as statistically significant at a p value of 0.05 or less. All statistical computations were done using StatXact 4 for Windows (Cytel Inc., Cambridge, USA) and R, version 2.1 (R Development Core Team 2005).19

Immunohistochemical stains were performed on hundred cases. Ages of the patients ranged from 23 to 84 years with the median of 45 years. (Table-1) Mean age was 46.27 ± 12.18 years. Most of the patients (73%) had ages between 30 and 59 years. Eight patients were below 29 years of age and one patient above 80 years. The tumour sizes ranged from 1.0 to 12.5 cm with mean of 4.68 ± 2.27 cm. Majority of the patients (85%) had invasive ductal carcinomas, 9% had mixed tumours, 3% had invasive lobular carcinoma and 3% had mucinous carcinomas. Two to 25 lymph nodes were isolated from modified radical mastectomy 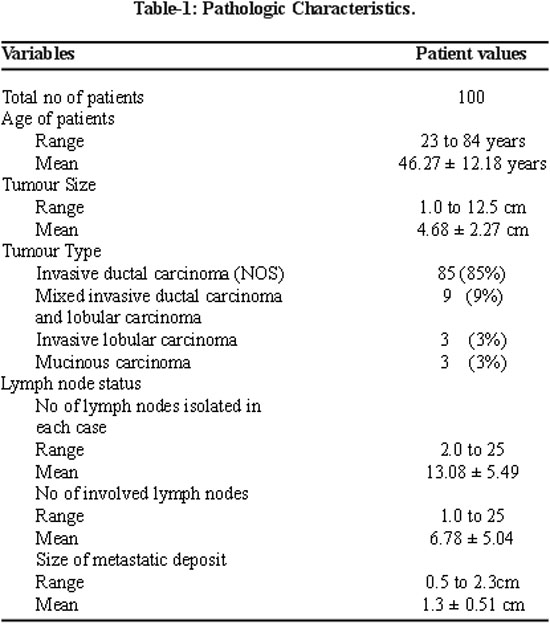 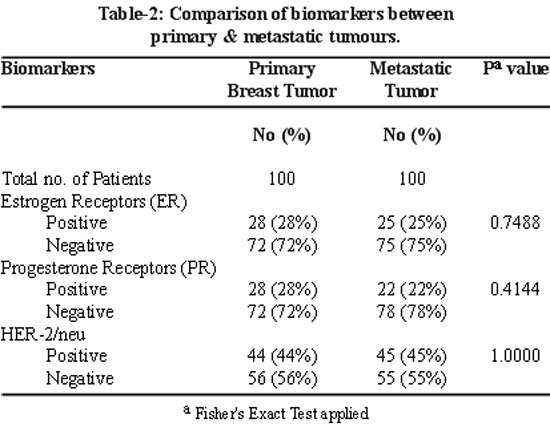 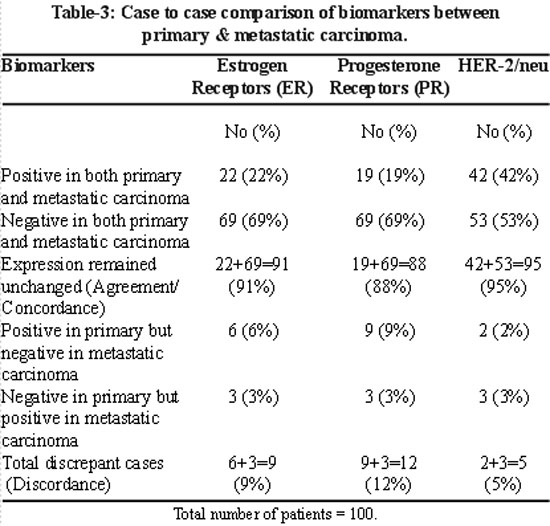 Estrogen and progesterone receptors and HER-2/neu protein expression showed significant concordance between primary and metastatic breast carcinoma to the corresponding lymph nodes. Hormone receptor status is usually determined only on the basis of receptor content in the primary tumours as it is generally assumed that hormone receptor content of the metastases is similar to that of primary carcinomas. Our study favors previous concept because there is no statistically significant difference of hormone receptor expression between primary and metastatic tumours. On the other hand metastatic deposits in the lymph nodes can also be used to assess hormone receptor status in the third world setting, when tissue from the primary tumour is not available for receptor analysis. However there are a small percentage of ER and PR positive patients in which metastatic deposits do not express hormone receptors. Therefore the patients who developed distant metastasis despite the endocrine therapy may undergo radiologically assisted biopsies and get hormone assays done in order to know the exact status of the hormone receptor expression.

We express our gratitude to Dr Usman Rashid, Mr Mohammad Tahseen and Ms. Shamsha Noorali Punjwani for their help and assistance.