Objective: To evaluate the drug dispensing practices and patients' knowledge on drug use among the outpatients and to identify and analyze the problems in drug prescribing and dispensing.
Methods: A prospective cross-sectional descriptive study was conducted using World Health Organization (WHO) core drug use indicators from July 13, 2008 to August 15, 2008 in Manipal Teaching Hospital, .
Results: A total of 4231 prescriptions were encountered with the total of 10591 drugs prescribed. The average number of drug per prescription was 2.5. Only 13% (n= 10591) of drugs were prescribed by generic name. Percentage of drug prescribed from WHO model list of Essential drugs, Essential drug list of and Nepalese National Formulary was 21.7%, 32.8% and 42.3% respectively. Antibiotics and injections encountered were 28.3% and 3.1% respectively. Average cost per prescription was found to be Nepalese Rupees (NRs) 285.99 (US $ 3.73). Patient knowledge on correct use of drugs and appropriate labeling was found to be 81% and 1.4% respectively. Average dispensing time per prescription was 52 seconds.
Conclusion: The finding from current study shows a trend towards irrational prescribing and dispensing. Hence, there is a need for effective intervention programme to encourage the physicians and dispensing pharmacists in promoting more rational drug use (JPMA 59:726; 2009).

Inappropriate drug prescribing is a global problem.1 Misuse of drugs occur in all countries. The irrational practices are especially common and costly in developing countries. Such practices include; polypharmacy, the use of wrong or ineffective drugs, underuse or incorrect use of effective drugs, use of combination products which are often more costly and offer no advantage over single compounds and common overuse of antimicrobials and injections.2 Irrational drug use leads to reduction in the quality of drug therapy, wastage of resources, increased treatment cost, increased risk for adverse drug reactions, and emergence of drug resistance.3 Rational Use of Drug (RUD) requires that patients acquire medications appropriate to their clinical needs, in doses that meet their own requirements, for an adequate period of time, and at lowest cost to them and their community, as defined by World Health Organization (WHO) conference at Nairobi 1985.4 In a low and middle income country like Nepal, large proportions of the population have limited access to medicines due to poor availability and patients being unable to pay for their prescriptions and not able to buy medicines.2 Nearly 42% of the health budget is spent on drugs and international donors spend another three times, 80% of medicinal products are imported to Nepal however, the availability of drugs in the health posts and clinics are sporadic resulting into the prevalence of  inappropriate drug use.2 The other issues that complicate the appropriate drug use are remote rural population not accessible to health facilities, and widespread poverty and illiteracy.2 Although, research has been undertaken on medicine prices, so far there has been insufficient progress in improving medicine affordability and availability for individual patients in many countries.5
Drug utilization studies have been done ever since the existence of pharmacy profession. Pharmacy education always stress the following '3Rs' i.e. right drug, right dose and right time and promise to reduce the preventable drug related morbidity.6 Kafle and Khanal were the first to conduct a study on prescribing practices at private sectors in Nepal.7 Nancy L Blum highlighted on the immediate need for rationalizing the use of pharmaceuticals and prioritized the need of establishing Drug Information Network in Nepal.2 Manipal Teaching Hospital (MTH) is continuously serving in Western Nepal with the objective of promoting RUD. In MTH, a Drug Information Centre (DIC) was established in November 2003, since then several initiatives were taken to promote rational use of medicines in the hospital. Some of the initiatives taken were revitalization of the hospital pharmacy, Drug and Therapeutic Committee (DTC), establishment of Medication Counseling Centre (MCC) for the patients, and setting up of pharmacovigilance center.
Drug utilization studies should be done periodically to promote RUD in terms of prescribing and dispensing and also to evaluate the patients understanding of drug usage.8 Hence, to give continuation to the effort of promoting RUD we made an attempt to carry out this study with an objective of evaluating the drug dispensing practices and patients' knowledge on drug use among the medical outpatients and to identify and analyze the problems in drug prescribing and dispensing.

A prospective cross-sectional descriptive study was conducted for 22 days (July 13, 2008 to August 15, 2008). The study was carried out at the out patient pharmacy (OPP) in MTH. MTH is a 750 bedded tertiary care teaching hospital. The patients visiting are mainly from Pokhara and neighbouring districts Syangja, Baglung, Tanahaun and Parbat. OPP is located in the ground floor of the hospital. The patients visiting Out Patient Department (OPD) come to the OPP with a prescription for getting medicines. There is a separate pharmacy [In Patient Pharmacy (IPP)] on the second floor of the hospital for dispensing medicines to the hospitalized patients.
Patients visiting the OPP with a prescription from hospital OPD were enrolled in the study. A total of 4231 patients were taken during the study period. Follow up visits were counted as separate visits. Hospital accessories and appliances were not counted as drugs.
International Network for Rational Use of Drug (INRUD) encounter form9 was modified and used for data collection. The INRUD encounter form was divided into prescribing indicator and patient care indicator. Data were collected by researchers (four B. Pharm students) and work division was made accordingly to fill prescribing indicators, dispensing time and quantity of drug dispensed per prescription (the time taken by the dispenser in order to make labeling and giving instructions to the patient was considered as dispensing time). After the medicines were dispensed, envelope labeling was checked and patients were interviewed for their knowledge on the dispensed medicines (i.e. when and how much medicines to be taken). Patient's attendant was interviewed for paediatric patients and patients with mental incompetence. Results were analyzed using Microsoft excel 2003 spreadsheet. The SPSS version 9.0 was used to carryout descriptive statistics.

A total of 4231 encounters with 10591 drugs were prescribed. Out of them 9763 (92.2%) were dispensed from the OPP. The remaining drugs were either not available in the pharmacy or the patient did not have adequate money to buy them or they had the medication already with them.
Majority of the patients were within the age group 21-30 years. The mean age of the patients was 34.68 ± 19.95 years.
Among the total 4231 prescriptions, majority were from the Medicine department.
The average number of drugs per prescription was found to be highest in the Obstetrics and Gynaecology department (Table-1). 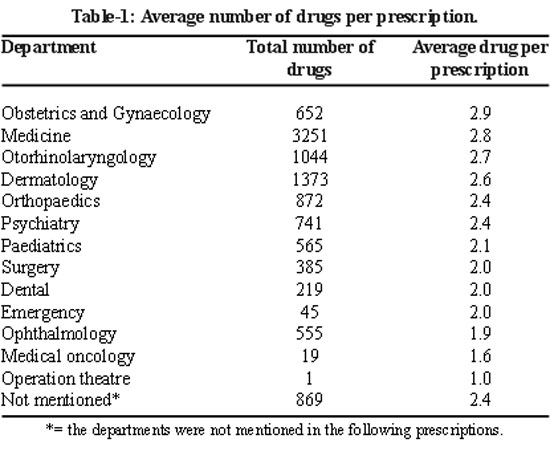 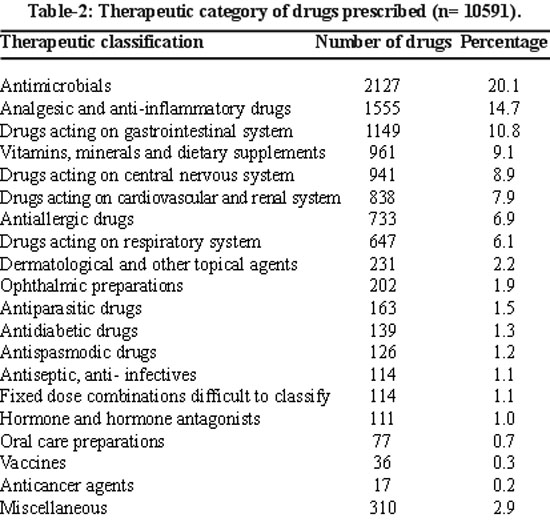 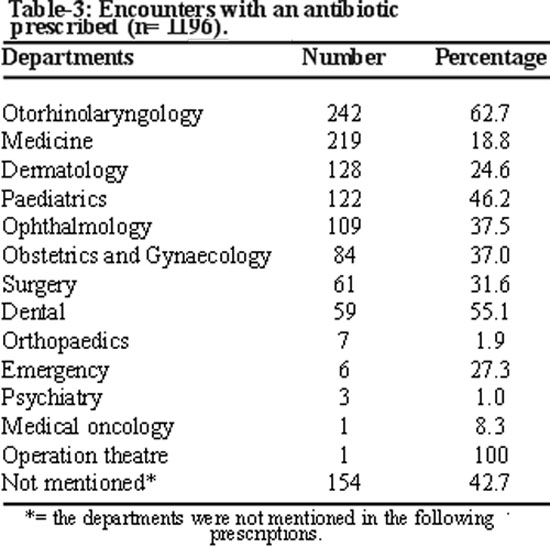 encountered is listed in Table-3.
There were 143 injectables prescribed from different departments. The highest number of injectables were prescribed by Orthopaedics department. The first five injectables prescribed were Triamcinolone (n= 24, 16.8%), Nandrolone (n= 21, 14.7%), Methyl prednisolone (n= 17, 11.9%), Human insulin (n= 15, 10.5%) and Hepatitis B vaccine (n= 14, 9.8).
Cost analysis was done for 3178 prescriptions. Remaining prescriptions were not analyzed because the drugs were either not available in hospital pharmacy or the patients had drugs in their home or they did not have enough money to buy them. Majority of prescriptions 959 (30.2%) had a price less than NRs 100. The mean cost per prescription was NRs 285.99 ± 495.75 (US$ 3.73 ± 6.47).
From the total of 4231 patients only 3959 were interviewed for their knowledge on proper use of drugs among 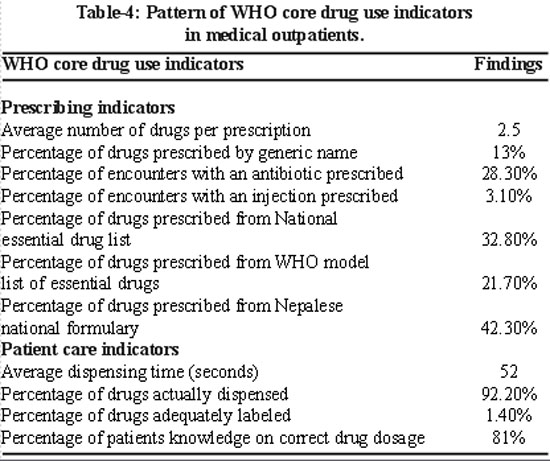 which 3207 had proper knowledge on drug usage. The remaining patients could not be interviewed because they were not willing.
The percentage of appropriately labeled envelope was found to be 1.4% (n= 4231). The overall findings for the WHO core drug use indicators are listed in Table-4.

The findings of the present study show trends towards irrational prescribing and dispensing. The average number of drug per prescription was significantly higher than recommended by WHO, generic prescribing was remarkably lower, antibiotics and injections prescribed were considerably higher, prescribing from EDL, WHO model list of essential drugs and NNF was also low and appropriate labeling of envelope was surprisingly low. While other parameters analyzed was found judgemental, the patient's knowledge on correct dosage was found to be fairly good.

We express our appreciation to the , Manipal Teaching Hospital for assisting us in conducting this research project.