Sirenomelia, the Mermaid Syndrome: case report and a brief review of literature

Sirenomelia, the Mermaid Syndrome is a rare and lethal congenital anomaly with an incidence of one in 60,000 to 70,000 pregnancies. Sirenomelia is characterized by complete fusion of the lower limbs, commonly associated with renal agenesis, absent external genitalia and other gastrointestinal defects. Another pathognomonic finding is the presence of single umbilical, persistent vitelline artery which is the chief distinguishing anatomic finding from Caudal Regression Syndrome. We report a case of termination of pregnancy done on the basis of ultrasound diagnosis of bilateral renal agenesis with no liquor volume. The foetus was identified to have characteristic features of Sirenomelia at the time of termination.

Sirenomeila Sequence or Mermaid Syndrome was originally described by Rocheus in 1542 and Palfyn in 1553 and named after the mythical Greek sirens.1,2 It is a rare, lethal congenital anomaly characterized by fusion of the lower extremities or a single lower limb.3,4 A number of other abnormalities such as genitourinary and anorectal defects are frequently associated with this condition.2-4 The prevalence of this syndrome is 0.1-0.25:10,000 in normal pregnancies.1,5 This syndrome has a strong association with maternal diabetes where relative risk is 1:200-250 and up to 22% of foetuses with this anomaly will have diabetic mothers.6,7 We describe a case of Mermaid Syndrome diagnosed at the time of termination of pregnancy.
Case Report
A 27 year old, para 1, at 21+ weeks of gestation was admitted for termination of pregnancy due to ultrasound (US) diagnosis of multiple congenital anomalies. She was booked at 9 weeks gestation by US dating scan and had regular antenatal follow ups. There were no medical or obstetric risk factors. There was no personal or family history for Diabetes Mellitus or congenital abnormality. Her previous pregnancy was also uneventful.
Routine anomaly scan performed during this pregnancy at 21 weeks revealed a single foetus corresponding to 19 weeks gestation with no single measurable pocket of amniotic fluid; both foetal kidneys and urinary bladder were not visualized. In addition, deformity in the lower half of the lumbar spine was noted and both lower limbs could not be clearly assessed due to severe oligohydramnios. In view of these findings, a repeat was done which confirmed the same findings.
The couple was counseled regarding poor foetal prognosis and that the anomalies were incompatible with life. The couple opted for termination of pregnancy. The procedure was carried out with Intracervical Foley catheter and vaginal Prostaglandin E1 (Misoprostol).
Foetus was delivered having single lower limb and a foot with fused toes, spinal malformation in the caudal region, compressed fetal head with low set ears. There was syndactyly of the left hand. The anal opening was absent and foetal sex could not be identified (Figure-1). The foetus weighed 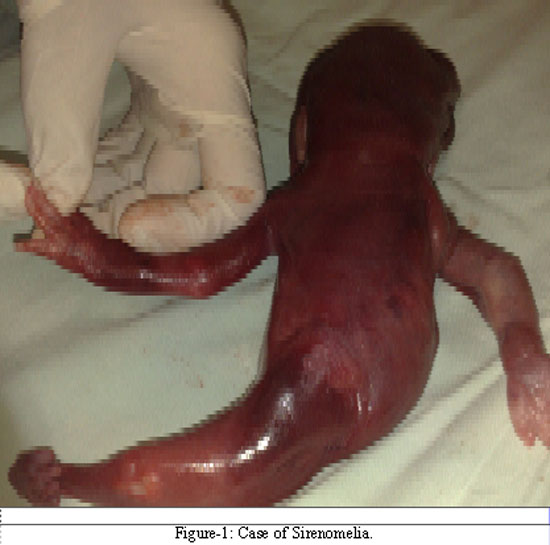 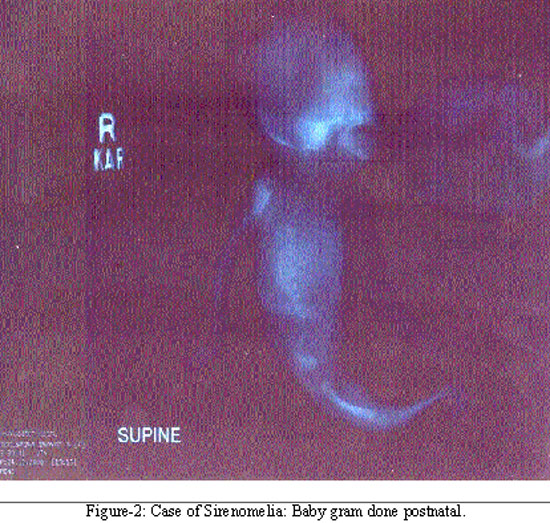 anomalies were also seen. The above findings were consistent with the diagnosis of Sirenomelia. The couple declined for an autopsy.

Sirenomelia is a rare and fatal congenital anomaly and has strong association with maternal Diabetes. Early prenatal diagnosis by first trimester scan should be the aim to minimize the trauma related to the termination of pregnancy at advanced gestation. In addition, where possible, a second US scan should be performed 4-6 weeks after the initial 8-9 weeks scan so that gross structural anamolies are detected and termination of pregnancy be considered earlier.

Sirenomelia is a rare and lethal congenital anomaly, caused by a disruptive vascular defect, characterized by fusion of the lower extremities, associated with bilateral renal agenesis, absence of the sacrum, rectum, and bladder.4
The US diagnosis of Sirenomelia is based on the presence of fusion of the lower extremities, associated with other skeletal and lumbar spine deformities.1,6 In addition, bilateral renal agenesis, heart and abdominal wall defects are seen on US.6 Diagnosis is commonly made in the second trimester with oligohydramnios as the alerting sign.8 In our case, the diagnosis was primarily of renal agenesis during routine anomaly scan. The lower limbs were not seen properly due to severe oligohydramnios. Additional abnormalities seen in our case were single umbilical artery, imperforate anus and absence of external genitalia. These are the classic associated abnormalities quoted in literature.1,2,5 The foetuses with Sirenomelia have a Potter facies as was found in our case. This is secondary to the renal abnormalities.
Caudal Regression Syndrome (CRS) is a rare congenital defect in general population with a prevalence of 0.1-0.2:10,000 in normal pregnancies.9 Sirenomelia was formerly thought to be an extreme form of CRS, however it is reclassified to be considered a separate condition.2,7 Specific anomalies are common to both conditions, but aside from fusion of the lower extremities, an aberrant abdominal umbilical artery/"persistent vitelline artery" has been invoked as the chief anatomic finding that distinguishes Sirenomelia from CRS.1,10 The syndrome is not associated with foetal chromosomal abnormality.7
The etiology of Sirenomelia remains unclear. Diversion of blood flow away from the caudal portion of the embryo through the abdominal umbilical artery/ "vascular steal" has been proposed as the primary mechanism leading to Sirenomelia. 1,2,10 In contrast, CRS is hypothesized to arise from primary defect of caudal mesoderm.10 A teratogenic event during the gastrulation stage i.e. 3rd gestational week, may interfere with the formation of notochord, resulting in abnormal development of caudal structures.1,5 Altered oxidative metabolism from maternal diabetes may cause increased production of free oxygen radicals in the developing embryo, which may be teratogenic.9
There is a strong association of Sirenomelia and Caudal Regression Syndrome with maternal Diabetes. The disorder occurs in about one in 350 infants of diabetic mothers, representing an increase of about 200-fold over the rate seen in the general population.6 Although in our case the mother did not have evidence of this risk factor but should be counseled about early screening in the subsequent pregnancy. The condition is seen 100-150 times more frequently in monozygotic than in dizygotic twins or singletons1 and males are three times more often affected than females.1,5
The first trimester diagnosis of Sirenomelia can be made and the earliest documented case is in the 9th week of gestation.2 Hence, the mother should be offered a level 2 in the subsequent pregnancy. Colour Doppler imaging can be helpful in identifying the single large vitelline artery and the absence of renal arteries1-3 and 3D-sonography and MRI may complement the 2D-sonographic findings.1