Objective: To compare the frequency of haemorrhage after tonsillectomy as a day care procedure versus tonsillectomy as a one day procedure.
Methods: A comparative study was conducted at the Department of ENT and Head and Neck Surgery, , from January 2003 to December 2007. The sample consisted of 400 patients, divided into two groups, One group was kept in the hospital for eight hours and was labeled as the daycare group while other group was kept admitted for 23 hours stay (overnight) and was labeled as the one day group. Patients with nasal pathology, bleeding diathesis and less than 4 years of age were excluded. Patients were followed up post operatively on 7th and 14th day and were inquired about any bleeding episode from the mouth during stay at home. The data was analysed at SPSS 13.
Results: Post tonsillectomy haemorrhage was seen in 10 patients (2.5%), 4 (2%) occurred in day care group while 6 (3%) in one day group. All were secondary haemorrhages. Chi square test showed no significant difference in haemorrhages between the two groups.
Conclusions: Tonsillectomy can safely be done as a daycare procedure as there is no significant difference of post operative haemorrhage between daycare and one day admission (JPMA 59:709; 2009).

Tonsillectomy is defined as the surgical excision of the palatine tonsils and is a procedure routinely done in the ENT specialty. The majority of patients are from a younger age group and in these patients tonsillectomy is often combined with adenoidectomy, in which case the procedure is called adenotonsillectomy. Usual indications for tonsillectomy are recurrent attacks of sore throat and obstructive sleep apnoea (OSA), confirmed through sleep studies. Minimum age at which tonsillectomy can be performed is still controversial. Studies have shown that it can be done safely even in children younger than 3 years. The only concern in such a young age is the inability of the child to eat properly after the procedure.1
There is an increasing popularity of day surgery these days in an attempt to decrease the risk of nosocomial infections and economic burden on the patient due to prolonged hospital stay. All over the world different procedures are being done in the day care unit and tonsillectomy has also gained popularity as a day care procedure.2 The primary reservation with choosing day care tonsillectomy over the traditional approach is  the risk of post operative haemorrhage, and this is the base on which this study was conducted.

The study was conducted at the department of ENT and head and neck surgery , from January 2003 to December 2007. The sample consisted of 400 patients presenting to ENT OPD of Shifa International Hospital with a history of recurrent attacks of tonsillitis. Patients with any nasal pathology, bleeding disorders and those less than four years of age were excluded from the study. The patients were divided into two groups, each containing 200 patients. Complete blood count (CBC) and clotting profile were done in all the patients preoperatively. Patients of both groups were admitted on the morning of the scheduled day for surgery. These patients underwent tonsillectomy by bipolar diathermy technique performed by the same surgeons. Post operatively, patients of both groups were given same broad spectrum antibiotics and analgesics. One group was kept in the hospital for eight hours and was labeled as the daycare group while other group was kept admitted for 23 hours stay (overnight) and was labeled as the one day group. All the patients were discharged on the same oral broad spectrum antibiotics and analgesics. The patients were instructed to report any bleeding from the mouth or episode of blood stained saliva after discharge. They were followed up at the seventh and fourteenth post operative day. On each visit, the tonsillar fossae were examined for any blood clot or bleeding point. The collected data was analyzed using SPSS 13.

The gender and mean age of the two groups were comparable. (Table-1, Figure). A total of 10 patients 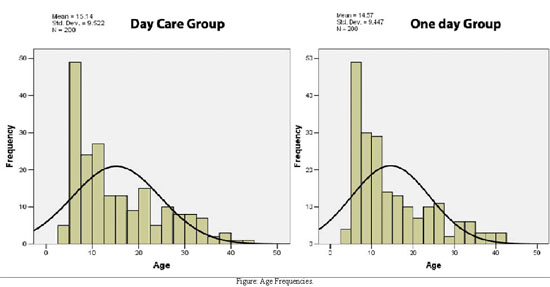 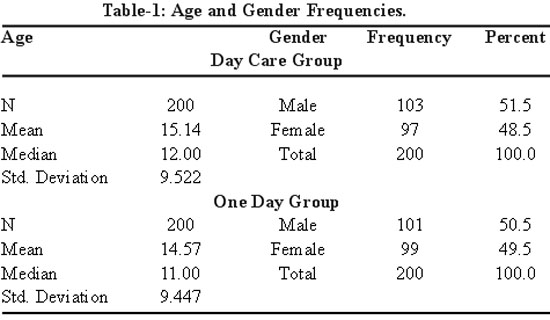 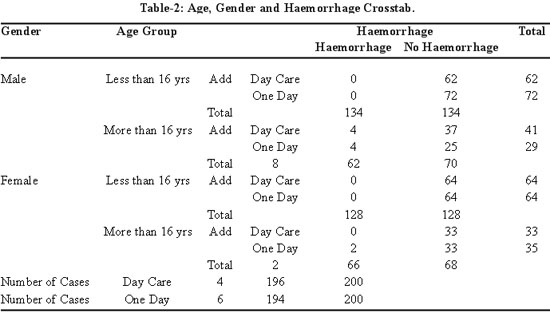 group haemorrhages occurred in 4 males and 2 in females. It was noted that patients developing the post tonsillectomy haemorrhage in both the groups were above 16 years of age (Table-2).
On comparing incidence of haemorrhage in both the groups and applying chi-square test it was noted that there was no significant difference between the two groups.
No significant difference was observed between the two groups on the frequency of post tonsillectomy haemorrhage.

Tonsillectomy done either alone or combined with adenoidectomy (adenotonsillectomy) is commonly practiced in the ENT specialty. There is an increasing number of patients with complaints of recurrent attacks of sore throat and most of them are from the younger age group. There are certain indications of tonsillectomy, for example recurrent attacks of acute tonsillitis in the absence of any nasal pathology, enlarged tonsils causing upper airway obstruction, severe dysphagia and sleep disturbances. Peritonsillar abscess is another indication in which tonsillectomy is done after the acute episode has subsided, usually 4-6 weeks after the infection has settled (called as interval tonsillectomy). Streptococcal and diphtheria carriers are relative indications for tonsillectomy. This procedure may also be required in certain malignant conditions like lymphoma in which the tonsil is removed for histopathological examination.
Over the years, surgeons have wanted to keep the patient admitted in hospital after tonsillectomy for one or two days because of the risk of serious complications like haemorrhage. However prolonged stay at the hospital not only increases the risk of hospital acquired infections, but also the cost of medical care to the patient. Our objective was to compare post operative haemorrhage after tonsillectomy done as a daycare and one day procedure.
The concept of daycare surgery, not only decreases the risk of hospital acquired infections but also reduces the cost for the patient.3 When the patient is referred for daycare surgery, it is essential to ensure that the procedure is suitable, the risk of complications (from surgery and anaesthetic) are minimized, admission to in-patient department following the day surgery is prevented and patients are adequately supported after discharge at home.
Daycare procedures are being done in various centers around the world in different specialties. Tonsillectomy has been traditionally performed as an in-patient procedure, but it has also gained popularity as a daycare procedure. Usually, it is the surgeon's decision whether to keep the patient for one day or more post operatively or discharge him on the same day of surgery.4,5 Often, it is the younger children who require careful post operative observation and may need to be admitted overnight.6 Studies have proved that in smaller children a short period of observation is all that is required.7-9 Adults, on the other hand, can be benefited with daycare tonsillectomy10 probably because of better compliance than the younger age group.
In our study all the post operative haemorrhages seen were secondary haemorrhages. The episode of bleeding in patients of both groups occurred at home and hence prolonged admission of the daycare patients for observation purpose would not have given any added benefit over day care protocol. They were kept under observation in hospital for 24 hours with conservative management. No bleeding was seen in any patient during hospital stay and none of them required blood transfusion or return to theater for any intervention.
From our study we concluded that tonsillectomy as a daycare procedure is safe and can be adopted in the routine practice provided there is specialized daycare staff.
No significant difference was found in post-tonsillectomy haemorrhage between day one and one day admission patients.