Isolated Oligohydramnios is not an indicator for adverse perinatal outcome

Objectives: To assess the impact of isolated oligohydramnios on Perinatal outcomes.
Methods: A prospective Cohort Study was conducted at the department of Obstetrics and Gynaecology, The Aga Khan University Hospital, . Pregnant women with isolated oligohydramnios were recruited for the study after obtaining informed consent. The mode of delivery and perinatal outcome were compared with women having normal amniotic fluid.
Results: Between 1st May 2005 and 30th December 2005 a total of 421 women were included in this study. Of these 421 women, 71 were exposed and 350 were unexposed. When compared to the unexposed group women with oligohydramnios had significantly lower birth weight babies and were delivered at a significantly earlier gestational age. However there was no statistical difference in the APGAR scores at birth and NICU admissions between the two groups. The number of inductions and caesareans done for foetal reasons were significantly higher in the exposed group.
Conclusion: Isolated oligohydramnios is not associated with adverse perinatal outcomes. However, it increases the risk for labour induction and Caesarean section (JPMA 59:691; 2009).

Oligohydramnios complicates between 0.5%- 5 % of all pregnancies. The prevalence depends largely upon the definition and criteria used for oligohydramnios and the population studied.1 The common etiological factors associated with oligohydramnios are ruptured membranes, congenital abnormalities and placental insufficiency.
It is thought to be associated with increased maternal and foetal morbidities. The perinatal morbidity and mortality is due to a high risk of caesarean deliveries for mothers due to foetal distress, low APGAR scores and meconium aspiration syndrome in the foetus.2
The possible explanation of the increased Perinatal Morbidity and Mortality could be due to umbilical cord compression, potential utero-placental insufficiency and the increased incidence of meconium stained amniotic fluid and oligohydramnios.3,4 Therefore delivery is routinely advocated even an otherwise uncomplicated pregnancies with appropriately grown foetus.5 However, some of the recent studies have shown no effect of isolated oligohydramnios on perinatal outcome.6
In there is limited data available regarding the causes, effects and outcomes of complicated pregnancies with oligohydramnios7,8 but the effect of isolated oligohydramnios on pregnancy outcome has not been studied.
This study was conducted to evaluate the effect of isolated oligohydramnios on the mode of delivery and its association with perinatal morbidity and mortality in our population.

The study was carried out at the , a with comprehensive services at tertiary level. The hospital is located in , which has a population of over 13 millions.
It was a prospective cohort type of study. In the period from 1st May 2005 to 31st December 2005. All pregnant women booked for antenatal care at The Aga Khan Hospital, with isolated oligohydramnios, were included in this study after obtaining informed consent. Patients with medical disorders like Diabetes, Pre-eclampsia and multiple pregnancies were excluded. Foetal growth restriction, congenital anomaly and premature rupture of membranes were also not included in this study.
The mode of delivery and perinatal outcomes of patients who had an ultrasound done after 30 weeks of gestation showing oligohydramnios ( AFI < 5cms or less than 5th centile for that gestation age) in the absence of any associated risk factor (exposed) were compared to women who met the inclusion criteria and had ultrasounds showing normal amount of amniotic fluid (unexposed).
Data was recorded on daily basis on a Performa which covered the personal and clinical information for each patient. Perinatal outcome and follow up was also recorded on the Performa.
Data was entered in a database file on SPSS version 14 and was analyzed using the same software. Categorical data was compared using Chi-square or Fisher's exact test where appropriate and continuous variables were analyzed with Student's t-test. A  P value <0.05 or an odds ratio (OR) with 95% confidence interval (CI) not inclusive of the unity was considered significant.

During the eight month study period, 421 patients were recruited in the study. Out of these, 71 had isolated oligohydramnios and served as the study population (exposed) and the rest of the 350 women had normal liquor on ultrasound examination served as the unexposed group.
Table-1 illustrates the demographic and obstetric characteristics of the two groups.
The rate of induction of labour was found to be as high as 63% in patients with isolated oligohydramnios compared to an induction rate of 14 % in the unexposed group. (p < 0.001) With the increasing induction rate the caesarean delivery rate also increased and was found to be as high as 42% in the exposed group compared to 18% in the unexposed group. (p < 0.001)
The rates of both elective and emergency caesarean section were high in the oligohydramnios group demonstrating the low threshold for caesarean section among the obstetricians in the oligohydramnios group. Figure-1 illustrates the indication of Caesarean sections in the two groups.
Regarding the Perinatal Morbidity and Mortality there was no difference in between the two groups. The APGAR scores at one and five minutes after birth did not show a significant difference between the two groups (Table-2). When compared to the unexposed group women with oligohydramnios had significantly lower birth weight babies and were delivered at a significantly earlier gestation. When these results were critically analyzed it became obvious that the lower birth weights in the oligohydramnios group were actually due to iatrogenic 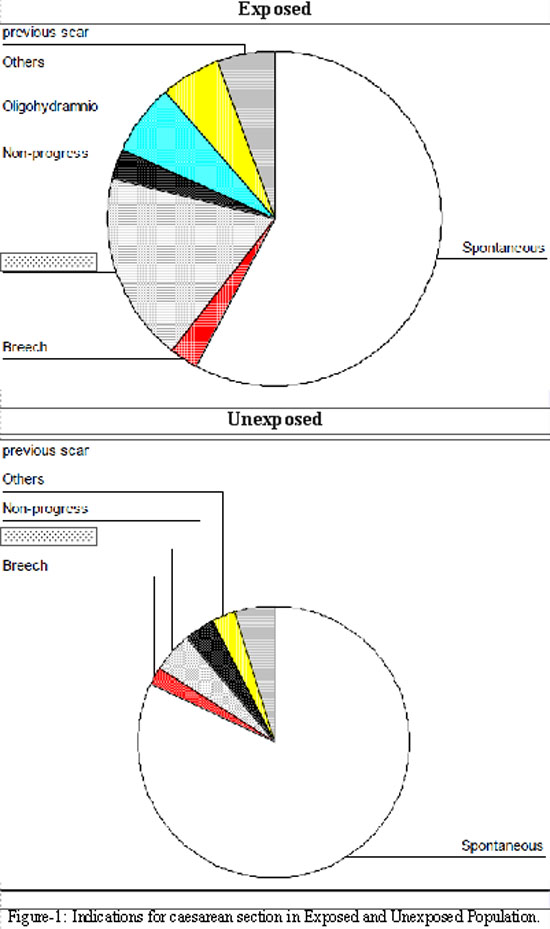 termination of pregnancy at an earlier gestational age via induction of labour or caesarean sections as compared to the unexposed group.

It is well established that oligohydramnios is associated with increased Perinatal morbidity and mortality.2,5,7 When associated with unfavourable maternal or foetal conditions such as foetal growth restriction or congenital anomalies or hypertension it leads to a much worse perinatal outcome than a normal amniotic fluid volume with the same conditions.3
Our study has shown that pregnancies complicated by isolated oligohydramnios are not associated with adverse perinatal outcomes. No difference was found in the perinatal mortality and morbidity and low Apgar scores in the exposed group when compared with the unexposed. All the risk factors like foetal growth restriction, congenital anomalies and hypertension were excluded from the analysis. The results of this study are consistent with that of other studies done on the low risk population.9-12
These results also strongly correlate with a recent study11 which used data from multicentre clinical trial of Routine Antenatal Diagnostic Imaging with Ultrasound (RADIUS) to show that isolated oligohydramnios is not associated with impaired foetal growth or an increased risk of adverse Perinatal outcome.
It is also seen that isolated oligohydramnios is associated with increased likelihood of iatrogenic Preterm delivery and comparatively lower birth weight babies.05 We also found a significantly higher number of low birthweight babies in our own study population.  Another study has reported that isolated oligohydramnios beyond 40 weeks of gestation increased the likelihood of small for dates babies and adverse perinatal outcome.13
In addition, significantly higher induction of labour was performed among women with isolated Oligohydramnios compared to the control group.  This is similar to that reported by others13 where 50% of low risk women with reduced amniotic fluid volume underwent induction of labour.
A more than two fold higher caesarean section rate in the isolated oligohydramnios group was observed in our study. The increase was not truly due to a higher rate of foetal distress but presumably due to higher rate of labour induction. It is a well known fact that induced labour compared to spontaneous labour results in caesarean section regardless of the parity and the condition of the cervix.13 In a Meta analysis, reduced amniotic fluid volume was associated with increased risk of Caesarean section due to foetal heart rate abnormalities.7 Others have also reported similar findings. 5,13
et al14 studied 183 women who underwent labour induction for oligohydramnios (AFI <5 cms), and they were matched with 183 controls. Like our study the neonatal outcome measures did not differ between the two groups but a significantly higher caesarean delivery rates were observed among women who were induced than among controls.14
When we started our study the original sample size calculated was 106 for the exposed group, to see a two fold difference in perinatal morbidity between the two groups with a power of 80. However during our study period we came across 71 exposed cases. In addition keeping the fact in mind that we could not demonstrate a difference in the Perinatal morbidity / mortality between the two groups the power of the study decreased.
In conclusion, Isolated Oligohydramnios does not increase adverse perinatal outcome and therefore should not be an indication for induction of labour or elective caesarean delivery.
The limitation of this study is that this was a hospital-based study our figures are not strictly representative of the whole population. As no significant difference in the perinatal morbidity/mortality between the exposed and unexposed groups was observed, the power of this study has decreased.
In addition, National data on this aspect of oligohydramnios is lacking, therefore other local studies are not available for comparison.