Hepatic encephalopathy (HE) is a syndrome observed in patients with cirrhosis. It is defined as a spectrum of neuropsychiatric abnormalities in patients with liver dysfunction, after exclusion of other known causes of brain disease.1 It is characterized by personality changes, intellectual impairment and a depressed level of consciousness. An important prerequisite for the syndrome is diversion of portal blood into the systemic circulation through portosystemic collateral vessels. Hepatic encephalopathy may develop in patients without cirrhosis who have undergone portocaval shunt surgery. The development of hepatic encephalopathy is explained, to some extent, by the effect of neurotoxic substances, which occur in patients with cirrhosis and portal hypertension. About 30% of patients with cirrhosis die due to hepatic coma (Hepatic Encephalopathy). Cirrhosis of liver is a common cause of mortality amongst Pakistani population and a frequent cause of admission in our hospitals2 and majority of patients with chronic liver disease have evidence of hepatitis B (22%), hepatitis C (28%) viral infection.3
The nitrogenous substances derived from the gut adversely affect brain function and play a role in its pathogenesis. These compounds gain access to the systemic circulation as a result of decreased hepatic function or portal-systemic shunts. In the brain these compounds produce alterations of neurotransmission that affect consciousness and behaviour. Abnormalities in glutamatergic, serotoninergic, g-aminobutyric acid-ergic (GABA-ergic) and catecholamine pathways have been described in experimental HE. Ammonia is a key factor in the pathogenesis of HE.4 In acute and chronic liver disease increased arterial levels of ammonia is seen. The blood-brain barrier permeability to ammonia is increased in patients with HE. Furthermore, the alterations in neurotransmission induced by ammonia also occurs after the metabolism of this toxin into astrocytes resulting in neurochemical events caused by the function alteration of this cell.5 Other gut-derived toxins have been proposed e.g. benzodiazepine like substances, products of colonic bacterial metabolism such as neurotoxic short and medium chain fatty acids, phenols and mercaptans and manganese which is deposited in basal ganglia and induces extrapyramidal symptomatology. All of these compounds may interact with ammonia and result in additional neurochemical changes which reactivate peripheral type benzodiazepine receptors with subsequent stimulation of the GABA-ergic system, an effect also induced directly by ammonia.
According to auspices of the World Congress of Gastroenterology, there are four types of hepatic encephalopathy (a) Acute, (b) Recurrent (c) Persistent (d) Minimal or sub-clinical. The hepatic encephalopathy is a diagnosis of exclusion6 and has four grades. There are several precipitating factors for HE such as infection, gastrointestinal bleeding, constipation, diarrhoea/vomiting, hypoxia and hypoglycaemia. The treatment of Hepatic encephalopathy has two parameters, one is to avoid the precipitating factor and the second is to treat the precipitating factor.
Therefore, considering the increasing incidence of hepatitis and hepatic coma with time, this study was carried out with the main objective of ascertaining the frequency of various precipitating factors and to assess their disease severity according to Child-Pugh classification in patients presenting with hepatic encephalopathy at Liaquat University Hospital Hyderabad, a 1500 bedded tertiary care teaching hospital which covers both urban as well as rural population of Sindh province, Pakistan. Early diagnosis and treatment of precipitating factor/s will reduce the mortality due to hepatic coma. Furthermore, this study will also open a new forum of discussion regarding demographical distribution of patient, knowledge and protocol regarding the medical workup of the patients with hepatic encephalopathy.

A hospital based descriptive study conducted on 87 patients in the Department of Medicine, Liaquat University Hyderabad/Jamshoro from April 2007 to September 2007. All patients who were above 12 years and had signs and symptoms of HE, both at presentation or during the course of hospital stay were evaluated and studied.
Hepatic encephalopathy is a diagnosis of exclusion.7 Therefore, HE was diagnosed after excluding metabolic disorders, infectious diseases, intracranial vascular events and intracranial space occupying lesions, knowledge of existing acute or chronic liver disease, the history of precipitating factors, and/or a prior diagnosis of hepatic encephalopathy determined by history, and relevant specific investigations. A proforma was designed and used for data collection. A detailed clinical history of the patient was taken regarding the present and past illnesses. Inquiry was made about fever, GI bleeding, including haematemesis and malaena, constipation / diarrhoea / vomiting, diet and any trauma or surgery. The drug history, particularly, use of diuretics, sedatives or tranquilizers, non steroid anti-inflammatory drugs (NSAID), anti-tussives and past history of hospital admission was also inquired. All patients were examined carefully and presence of fever, anaemia, jaundice, dehydration and asterixis was noted.
The routine and relevant investigations carried out were, full blood count, urine examination, blood urea and creatinine, blood glucose, chest radiograph, serum electrolytes, serum albumin, coagulation profile, ultrasound of abdomen, liver function test (LFT), HbsAg and Anti-HCV (if not previously diagnosed and not a known case). Due to the lack of facility for testing the serum ammonia level in the laboratory of Liaquat University Hospital, we were unable to perform ammonia levels and also an elevated blood ammonia level does not always detect and indicate hepatic encephalopathy.8 Therefore the method of exclusion to detect hepatic encephalopathy were used. The hepatic encephalopathy was graded according to the classification system.9 The severity of liver cirrhosis was assessed through Child-Pugh score system (Table-1).10 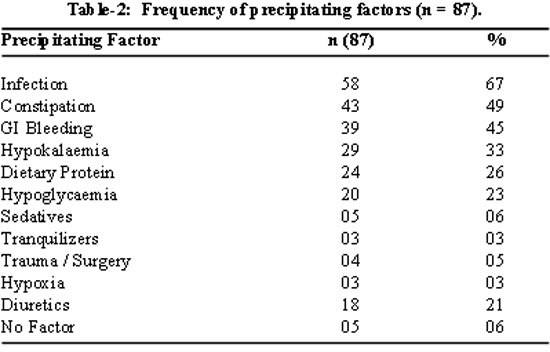 47 (54%) patients.
Out of 87 patients 59 (68%) recovered and were discharged, 05 were insistent  for discharge on request from hospital and 03 left the hospital against medical advice while 20 (23%) expired in which 13 were males. The child - Pugh score of 16 expired patients was between 10 -15 (class C) while 4 patients had a score range between 7-9 (Class B). Out of 20 patients which expired 15 were in grade-IV while 05 were in grade III of hepatic encephalopathy.