Gastrointestinal Somatization in males and females with depressive disorder

Objective: To assess gastrointestinal symptoms among depressed patients presenting in an outpatient psychiatric clinic.
Methods: All consecutive and consenting cases of depressive disorder presenting to the clinic from Jan' 02 to Dec' 05 were inducted in the study. A descriptive study was carried out in a clinical setting at the Neuro-Spinal Medical Institute, . The assessment was based on detailed history, physical examination, mental state examination and filling of semi structured proforma designed for this purpose. For diagnostic purpose WHO classification ICD-10 criteria was used.
Results:  A total of 1165 (Male: 56%, Female: 43.2%) patients were assessed. The age ranged from 6 to 90 years for male and 5 to 80 for females with p-value of 0.001. Majority were married. Their educational status revealed that 20.4% of males and 45.1% females were illiterate. The most frequently reported gastrointestinal symptom was decreased appetite (67.7%) followed by constipation (57.7%) and diarrhoea (42.3%). Other reported symptoms included abdominal pain, vomiting, gas, indigestion and nausea in order of frequency. In males 13.7% and 12.7% females had suffered for > 10 years before seeking psychiatric consultation. Surprisingly, about 26.3% of the patients had previously pursued alternative modes of treatment (homeopathic, faith healers and hakeems).
Conclusion: Somatic symptoms manifesting as gastrointestinal symptoms are common in patients with depressive disorder. Awareness about such an association is essential and will be useful for primary care physicians and gastroenterologists for establishing early diagnosis and management, thus avoiding unnecessary investigations in patients with poor resources (JPMA 59:675; 2009).

Depressive disorder is the most common psychiatric disorder and is ranked 4th amongst the global burden of disease and is expected to be the 2nd most common cause of disability by the year 2020 according to W.H.O.1 Depression is frequently under recognized2,3 maybe because of its clinical presentation in the form of physical symptoms including gastrointestinal somatization. Although physical symptoms account for more than half of all visits to doctors, at least a third of these symptoms remain medically unexplained.4,5 Such symptoms are often part of the somatization phenomenon associated with potentially treatable conditions such as stress, anxiety and depressive disorders.6 This has significant economic impact on the society and the health care system with respect to morbidities, mortalities and excessive utilization of resources.3,7
Somatic symptoms have been reported as being a core component of the depressive syndrome.8 Symptoms including those of the gastrointestinal tract have generally been correlated with various psychiatric disorders including anxiety, panic and depressive disorders.9-12 A lot of work has been done regarding various syndromes related to GIT such as chronic dyspepsia and irritable bowel syndrome,13,14 but there is not enough literature when it comes to the frequency of overall GIT somatization in relation to depressive disorder especially among both genders in the local literature. Therefore, this study specifically focuses on the association between depressive disorder and gastrointestinal somatization among male and female patients looking at the cultural aspects in relation to treatment seeking behaviour. 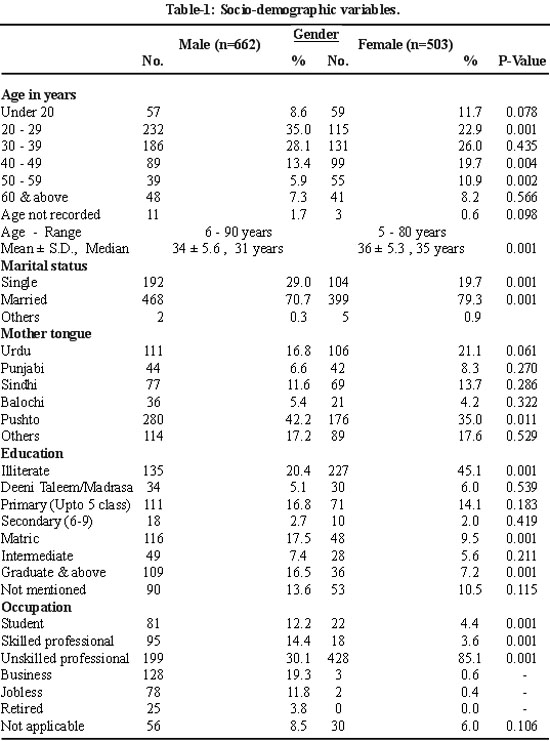 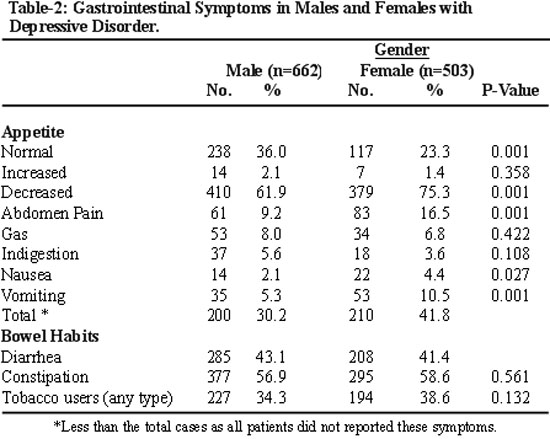 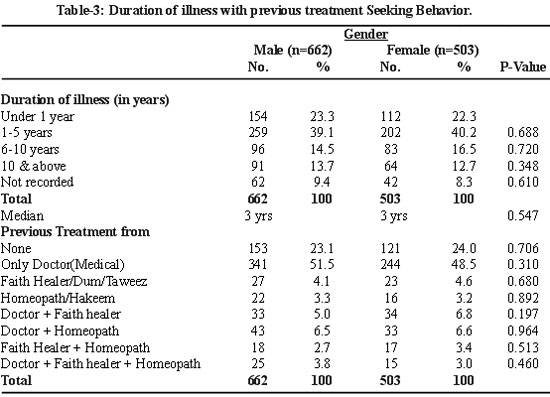 statistically significant when compared in both genders. Indigestion was reported by 5.6% males and 3.6% females (p < 0.108). Of the cases studied, 36.45% reported tobacco use in any form including smoking, pan and niswar (Table-2).
Regarding duration of illness 13.7% males and 12.7% females had suffered for more than 10 years before seeking psychiatric consultation. Surprisingly about 26.3% of the patients had previously pursued alternative modes of treatment (homeopathic, faith healers and hakeems) (Table-3).

Patients presenting with GI symptoms were 2504 and they were screened during the period January 2002 to December 2005. Patients who fulfilled ICD were 1165. Ten diagnostic criteria for depressive disorder (F 32) were inducted in this study. The study was carried out on outpatient cases reporting at the Neuro Spinal and Medical Institute, . Consent was verbally obtained as most of the cases were illiterate and there was no invasive procedure involved. Cases were informed about the research before and after filling the proforma with assurance regarding the confidentiality in locally understandable languages. Parents or guardians consented for cases below 18 years of age. They were informed about the objectives of the study, their rights to participate voluntarily in the study without obligation and to withdraw any time without giving any reason. They were given the opportunity to ask questions.
The assessment was based on detailed history, physical examination, mental state examination and filling of semi structured proforma designed for this purpose. Cases with gastrointestinal disorders or on current treatment were excluded. Before reaching for psychiatric consultation, patients had already been investigated, (including multiple reports of endoscopies) to rule out physical disorders.
The semi structured proforma included questions regarding the socio demographic variables such as gender, mother tongue, marital status, education and occupation in addition to questions regarding duration of illness and gastrointestinal symptoms. Previous treatment seeking behaviour was also evaluated including alternative modes of treatment as hakeems, faith healers and homeopaths. Previous tobacco use (smoking, niswar and pan) was also documented. The proforma was administered by a trained assistant and a clinical psychologist followed by consultation with a psychiatrist in each case. The data was collected and entered using Microsoft Excel and then transferred to SPSS 13.0 for analysis. The variables were cross-tabulated to identify possible relationships.

The study was conducted in a private sector hospital. The patients included were those who came to seek care at this facility. Since most of the cases were referred by different gastroenterologists and physicians, it may be comparatively representative. However the results should not be generalized as the sample of the patients might not be representative of the regional or national population. This study revealed that males (56%) outnumbered the females (43.2%) in out patients' visits. This may be due to the fact that in this part of the world males are the dominant bread earners for the family and hence they are unable to utilize the public facilities, as the outpatient department working hours of most government hospitals are in the morning. The main age group suffering from depression and co morbid GIT symptoms was from 20-59 years and the age group 20-39 accounted for more than one third of the visits. This prevalence in a productive age group can contribute towards population and economic problems. It is evident from the study that more than two thirds of the patients were married. It may be noted that as compared to married men (70.7%), married women (79.3%) were more vulnerable to the development of depression and co-morbid GIT symptoms. This finding is comparable to earlier studies that have revealed that somatization is more common in females.15-17 The vulnerability of married women for the development of  depression and comorbid symptoms is a debatable area, as women in our society are usually married at a younger age and due to culturally male dominated phenomenon they are verbally less expressive and hence the stress may be presented in the idioms of bodily functions.
Studies in the developed countries have shown that despite increased awareness in the detection of depressive disorders, it is difficult to diagnose these disorders in the initial phase and significant numbers of cases are only recognized after several consultations, sometimes taking many years subsequent to the patient's initial visit.18 Supporting this notion, the study revealed that a total of 50% of the respondents had previously consulted general physicians specially gastroenterologists, with notable investigations including endoscopies. Also a gap of 6-10 years was observed between the development of symptoms and psychiatric consultation in 15.6% of the respondents. Approximately 13.3% of the patients were referred for psychiatric treatment after a gap of 10 years and above.  Interestingly about every 4th case had sought alternate mode of treatments including homeopathic treatments, faith healers and/or hakeems (oriental therapy) before psychiatric consultation. This can be explained on the basis of the prevalent misconception about mental illness in this part of the world which attributes the disease due to the possession or caused by supernatural evil forces.19,20 Thus a lot has to be done regarding awareness among doctors and the public about physical manifestations in psychiatric diseases. Also, it can be safely stated that psychiatric treatment is still stigmatized in developing countries due to social and cultural factors.21 This can be attributed to the low literacy rate and there is a dire need to spread awareness to publicize psychiatry in general.
Previous studies have reported a change in appetite, constipation, back and abdominal pain as the most common GI symptoms in depressive patients.18,19,22 This study has revealed that amongst the GIT symptoms decreased appetite is most common followed by constipation and diarrhoea. Abdominal pain was the 4th most reported symptom. Complain of gas problems were reported by 8% of males and around 7% of females. This is a culture bound phenomenon as earlier studied.23 However concurrent tobacco use as reported in this study (36% of the respondents) should be kept in mind while analyzing such findings.

The study revealed that GIT somatization is a common phenomenon among depressed patients in developing countries. The sufferers may seek different modes of treatment including alternative methods instead of psychiatric consultation due to lack of awareness particularly in population with low literacy rate. This leads to prolonged suffering at the cost of their health and economics. Further community studies on large randomly selected samples are required to generalize these findings and better understanding can be achieved with qualitative studies in this regard.

The paper is dedicated to late Sarwar Jahan Zubri for her much valued ideas, support and referral of the patients.