Objective: To determine frequency, obstetrical risk factors and the subsequent feto-maternal outcome in women suffering from placental abruption.
Methods: A retrospective case series study was carried out in the Department of Obstetrics and Gynaecology Unit One, Liaquat University Hospital Hyderabad, Pakistan from 1st January 2006 to 31st December 2006. All women with the diagnosis of placental abruption having more than 24 weeks gestation were included in the study.
Results: Of the 2224 delivered women 106 (4.7%) had placental abruption. All of the 106 women were un-booked, with 67 (63%) in the age group 20-35 years, 68 (64%) belonged to rural areas. 98 (92%) patients were multiparous and 57 (54%) were preterm. The commonest medical disorders observed were anaemia in 84 (79%), Diabetes Mellitus in 8 (8%) and gestational hypertension in 8 (8%) patients. There were five maternal deaths, showing case fatality rate of 5%. The foetal prognosis was characterized by low birth weight seen in 74 (70%), low apgar score in 30 (28%) and high still birth rate in 54 (51%), constituting perinatal mortality rate of 25.62/1000 deliveries.
Conclusion: Abruptio placentae is associated with adverse maternal and foetal outcome. Multiparity, un-booked status, rural residence and maternal anaemia are important risk factors (JPMA 59:672; 2009).

Abruptio placentae is uterine bleeding from the premature separation of the normally sited placenta after 20 weeks of gestation. Its exact etiology remains obscure, however various risk factors have been implicated like advanced maternal age, high parity, low socio-economic status, smoking, folic acid deficiency, maternal hypertension, thrombophilia and trauma.1  It is a high risk situation not only for the mother but also is a significant cause of perinatal loss. The maternal consequences are secondary to the severity of placental abruption. The foetal effects are also determined by the severity of placental abruption, gestational age and underlying risk factors like intra-uterine growth restriction. In the developed world, the frequency has been reported from 0.43% to 1.8% with perinatal mortality ranging from 4.4 to 67.3%.2 In Pakistan, it ranges from 2.2% to 7% with alarmingly high perinatal mortality of 50.63% to 62.5%.3-5
The objective of the study was to determine the frequency, obstetrical risk factors and the subsequent foeto-maternal outcome in women suffering from placental abruption.

It was a retrospective case series study carried out at the Department of Obstetrics and Gynaecology Unit One, Liaquat University Hospital Hyderabad, Pakistan from 1st January 2006 to 31st December 2006. All women with the diagnosis of placental abruption and having more than 24 weeks gestation were included in the study. Data was collected on pre-designed Performa from the patient's records and results were analyzed.

Out of total 2224 deliveries at Gynaecology Unit One, Liaquat University Hospital Hyderabad, 151 women had antepartum haemorrhage. Placental abruption was observed in 106 cases, which corresponds to the frequency of 4.7% while rest of the cases belonged to placenta previa and other incidental causes.
All were un-booked cases and majority 68 (64%) were referred from rural areas of Sindh. Sixty seven (63%) women were in age group of 20 to 35 years while 38 (36%) were more than 35 years of age. There were 98 (92%) multiparous women with grandmultipara constituting half of the study population. Gestational age was less than 36 ± 6 weeks in 57 (54%) cases, and nearly half of them were having less than 32 weeks pregnancy. About half of the study group presented with abruption, which was severe enough to cause intra-uterine foetal demise. Caesarean delivery was required in 29 (27%) women. In 21 (81%) women, operation was performed in foetal interest while in 5 (19%) women surgery was needed due to severe abruption and poor Bishop score.
Associated medical disorders observed were, anaemia in 84 (79%) patients, Diabetes mellitus in 8 (8%), Pregnancy induced hypertension in 8 (8%), Hepatitis C in 4 (4%) and Hepatitis B infection in 1 (1%). In anaemic women, haemoglobin concentration was less than 7 gm% in 31 (29%) cases and it could not be concluded whether anaemia was the cause or consequence, of of antepartum haemorrhage, as patients were un-booked with no antenatal record.
Table-1, shows maternal morbidity and mortality 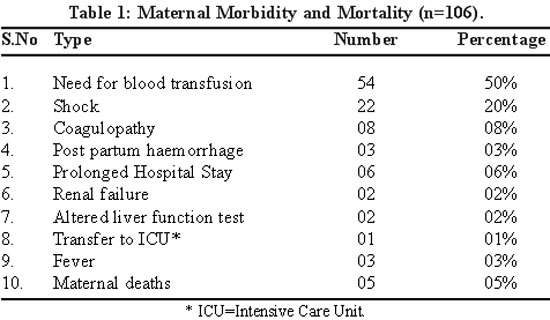 associated with placental abruption. Almost half of the study population required blood transfusion, of which 5 (5%) women required massive transfusion of more than 4 units of blood. There were five maternal deaths, showing case fatality rate of 5%. Abruptio placentae was responsible for 12% of total maternal deaths (n=42) in the year 2006 in the Department of Obstetrics & Gynaecology Unit One. All five died within 12 hours of admission. Cause of death was severe anaemia and irreversible shock in 3 women, disseminated intravascular coagulation in one and cardio-respiratory failure in another.
Table-2 shows perinatal mortality and morbidity in

An alarmingly high figure of abruption placenta was reported in our series in contrast to advanced countries, but conforming with various Pakistani studies.4-6 Liaquat University Hospital being the tertiary referral hospital with a large catchment area, drains mostly high risk cases.
Lack of antenatal care and rural residence were found to be the important risk factors in women suffering from abruptio placentae. Rural women are among the most disadvantaged people in in terms of their health status and access to adequate, comprehensive and affordable health services. According to the Pakistan Demographic and Health Survey 2006-2007, 35% of women did not receive pre-natal care at all.7 Non-provision of pre-natal care increases rural women's vulnerabilities to pregnancy and child birth related death and disabilities. A recent study from on obstetric intensive care unit admission revealed that 73% were residents of rural area.8
Availability and accessibility of antenatal care in remote areas will reduce the morbidity and mortality associated with abruptio placentae. It will provide advice on iron and folate supplementation, and to treat pre-existing medical conditions like anaemia, hypertension and diabetes mellitus. Pregnancy complications associated with abruptio placentae like gestational diabetes mellitus, and pre-eclampsia will be detected early and managed appropriately.
Another important risk factor found to be associated with this moribund condition was multiparity, a reflection of poor family planning practices in . Early marriages, lack of correct information and limited access to modern contraceptive methods, predisposes Pakistani women to give too early, too many and too frequent births.9 Barriers like poverty, illiteracy and lack of empowerment for decision making, further limit their ability to plan their family. Strengthening of family planning services could yield better results.
Most of the patients in the study were anaemic (79%), a fact also highlighted by other published reports.5,10 World Health Organization considers anaemia as a moderate public health problem in Pakistan with the estimated prevalence of 39.1% (29.6-49.5%) in pregnant women. Many of these women enter pregnancy in an anaemic state as estimated prevalence of anaemia in non pregnant state is 27.9% (24.2-31.9%).11 Anaemia is the result of malnutrition especially proteins, zinc, iron and concurrent illnesses like malaria, diarrhoea and parasitic infestations. Anaemic patients are more prone to develop haemorrhage and its complications. Hypertension and Diabetes mellitus were other risk factors observed in our series. Several other studies also confirm this association.12-14 Hypertensive patients had three fold increased risk of placental abruption compared to normotensive patients.5 Hypertension and Diabetes mellitus can cause and enhance the placental insufficiency and ultimately lead to abruption.
Prematurity was found in 54% cases. This observation is also evident from other studies.15,16 Preterm deliveries, pregnancy induced hypertension, intrauterine growth restriction and abruptio placentae share the common etiological factors and the present study gave further insight into the problem.17
Caesarean section rate was quite high (27%) but in line with other Pakistani studies.18 In majority of the cases, Caesarean section was performed in foetal interest. Witlin and Sibai19 found that Caesarean delivery was associated with significant reduction in neonatal mortality. Maternal and foetal outcome can be optimized through attention to risk and benefits of conservative management versus expeditious delivery in cases of placental abruption.
Poor perinatal outcome characterized by high intrauterine deaths in our study is consistent with reports from public sector hospitals of but in contrast with International studies.14,19 This could be attributed to adverse foeto-maternal conditions at the time of arrival, and severity of placental abruption. Prematurity, low birth weight and maternal anaemia were other factors responsible for foetal loss. Maternal mortality rate of 5% is comparable with studies from developing countries.20,21 This indicates poor safe motherhood services especially in remote and far-flung areas.

The frequency of abruptio placentae is alarmingly high with adverse maternal and foetal outcome. Multiparity, un-booked status, rural residence and maternal anaemia are important risk factors. Early intervention, expeditious delivery and strengthening of safe motherhood services particularly in rural areas, will help to prevent and reduce the gravity of the situation.