Objective: To determine the complication rate of (PICCs) peripherally inserted central catheters in cancer patients with a 1 year prospective cohort study.
Methods: All PICCs inserted in adult cancer patients in Radiology Department of The Aga Khan University Hospital were followed prospectively till removed or patient expired and pattern of complications noted.
Results: One hundred and fourty six PICCs were inserted over a period of 1 year and followed for a total of 3329 catheter-days; median placement, 14 days: range 3-218 days. Of these 67 (32.8%) PICCs were complicated and removed earlier, for a rate of 14.4/1000 PICC-days. Patients with haematologic malignancies were more likely to have complications as compared to those with solid tissue malignancies.
Conclusions: Despite a significant complication rate, PICCs are a relatively safe and cost effective method of establishing central venous access (JPMA 59:663; 2009).

Peripherally inserted central catheters (PICCs) represent a vascular access device (VAD) that can be considered to have an intermediate role in central venous access. Peripherally inserted central catheters can be made of either silicon rubber or polyurethane, the former being associated with a lower risk of thrombosis.1
Effective and reliable venous access is one of the cornerstones of modern medical therapy. With advancing age and increasing Co morbidities in our modern society, effective and reliable venous access can sometimes be very difficult to establish. PICCs provide reliable and safe intravenous access in a variety of indications.2
PICC lines are frequently used in oncology patients to deliver chemotherapy as well as other intravenous medications, fluids and total parenteral nutrition.3 Peripherally inserted central catheters offer certain advantages over other forms of long-term VAD.4
In particular, the use of PICC has provided a relatively simple,safe,easy,rapid and maintenance free means of accessing a central vein for the purposes of chemotherapy or other intravenous fluids.5
Despite the widespread use of PICCs, few prospective studies evaluating their safety have been performed, and even fewer have focused on patients with cancer. Overall, the complication rate in cancer patients appears to be higher than in other patients,
Therefore, we conducted this prospective study to determine the complication rate of PICCs in cancer patients attending our hospital.

The Aga Khan University Hospital (AKUH) is a 650 bed tertiary care center in . Medical Oncology Section is comprised of a 50 bedded inpatient unit with a four bedded BMT unit and a 30 bedded Day care chemotherapy unit. All the cancer inpatients who deemed to have difficult venous access or requiring a central venous access for multitude of indications, particularly chemotherapy after recommendation by primary care physician were referred to the department of Radiology for PICC insertion. We have a dedicated Interventional Radiology Team who inserts 4 Fr single lumen non-valved PICC under strict anti-septic conditions, and fluoroscopic guidance in Angiography suit. The PICC is inserted in any of the major vein of the upper extremities, more frequently in basilic vein and secured by stat-lock adhesive dressing. The polyurethane catheter is used because of its wide luminal diameter and easy blood products transfusion. It is recommended to be kept in place for 6-8 weeks duration by the manufacturer. It can be used for a longer period of time if no complication develops.
We prospectively identified and followed all patients who had a PICC successfully Inserted during a 1 year period, from March 1, 2007, to February 29, 2008, until they were removed or  patient expired The project was approved by the AKUH Institutional Ethical Review Committee.
PICC maintenance:
PICCs are used for all types of infusions and phlebotomy. The primary care inpatient nurse is responsible for catheter care, changes both dressing and IV tubing three times weekly and as needed, and performs the weekly saline flush. The IV insertion team is responsible for repair of torn catheters and unblocking of catheters. For caring of PICC at home after discharge, either home health care team or patients attendants were given detailed instructions regarding care of catheter. Patients were called at home daily on phone regarding any evidence of complication and advised to come to the ward if any complication developed.
A single reason was determined for any PICC removed prematurely. Reasons included catheter-related bloodstream infection (CR-BSI), phlebitis, thrombosis, catheter occlusion, leakage or broken catheter, or accidental removal. The decision to remove a PICC line was made by the patient's primary physician. The data regarding PICC were entered into an already formed proforma and filled by the principal investigator.
Twenty-six patients had more than one PICC placed during the study period. For the analysis, each PICC placement was counted as a new event. Therefore, all presented calculations, including the demographic description of the patient group, used PICC placements rather than individual patients as the unit for counting. For data analysis SPSS version 15 was used.

PICCs provide safe and cost effective central venous access for all kinds of indications. Peripherally inserted central catheter complication rates can be minimized if used and maintained appropriately. This includes PICC insertion under strict sterile conditions, patient family and staff education with formal aftercare guidelines, strict infection control and regular PICC maintenance and surveillance, making them a safe and acceptable venous access alternative for cancer patients. However a prospective study is needed to compare safety, efficacy and quality of life of patients with PICC and implanted ports. A total of 166 PICCs were inserted into 128 patients during the 9 months study period. One Patient had six PICCs inserted, five patients had four PICCs, six patients had three PICCs and 12 patients had two PICCs inserted. One patient had two PICCs, one on each arm at the same time. Twenty patients with their 20 PICCs were lost to follow up and were excluded from the Analysis. For the remaining 122 patients and their 146 PICCs, the data was available for analysis. The demographic profile of 146 patients and the primary indications for PICC placement are listed in Table-1.
Overall, the patient population included 93 (63.3%) men and 53 (36.7) women, with a mean age 43.1±16.7 years (range, -> 16-82 years). Seventy four patients (50.68%) had a solid tumour, and 72 (49.32%) had haematological malignancy. Among the solid tumours, the most 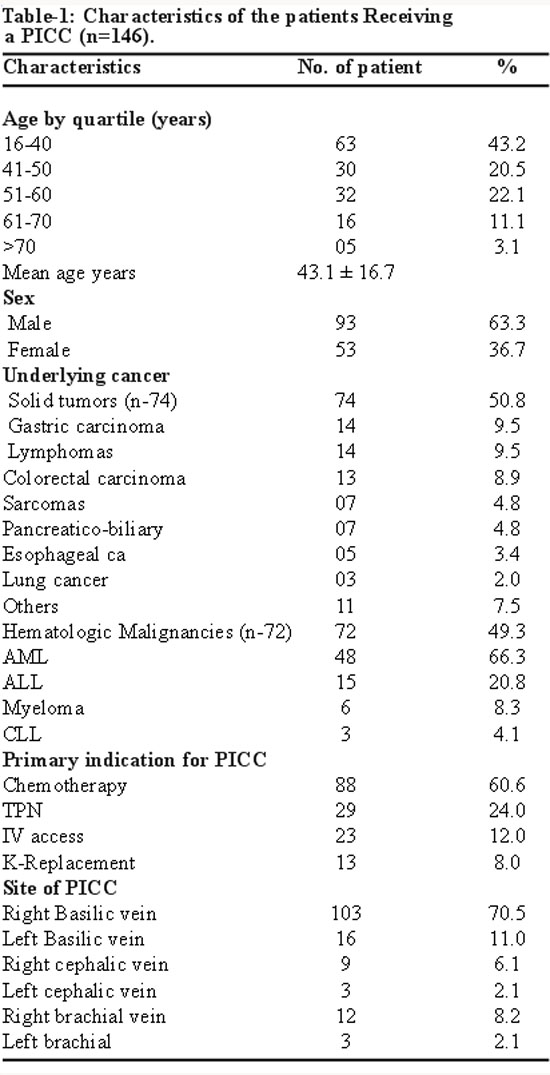 common were gastrointestinal malignancies, (50%).Acute myeloid leukaemia was the most common (66.3) among the haematological malignancies. The basilic vein was used most frequently, 119 (81.6%) for PICC placement. All the PICCs were secured by the stat-lok device.
Sixty seven patients (46%) were discharged from Hospital with a PICC still in place. Follow-up for these patients was arranged with home health care team, on phone and frequent follow ups in clinic. The remaining 79 patients (54%) remained hospitalized for the entire duration of PICC use.
The 146 PICCs were in place for a total of 3329 catheter-days (median time, 14 days; range, 2 to 218 days; mean, 23.8 ± 29.8 days). The most common indication for PICC were chemotherapy (60.3%). The most frequently used chemotherapy regimen was induction chemotherapy for Acute Myeloid Leukaemia followed by FOLFOX for coloxectal carcinoma. Majority of patients (54%) preferred PICC in sections, remaining were not clear about, which line to be preferred and decision were left on primary physicians care discretion.
Demographic and disease characteristics of the 146 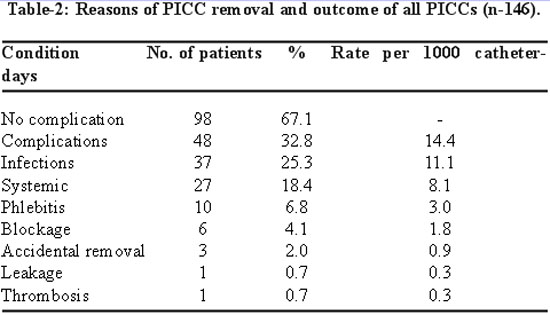 patients receiving a PICC are given in Table-1 and reasons of PICC removal are listed in Table-2. PICCs in sixty seven patients removed due to complications.
Ninety-eight (67.1%) PICCs were removed at completion of therapy without any evidence of complication.
Forty-eight (32.8%) of 146 PICCs were removed because of complication, rate of 14.4 per 1,000 catheter-days.PICCs of patients with Haematologic malignancies were more likely to be complicated (p=<0.05).
Infections were the most common complication reported, but culture proven to be positive in 11 patients (29.7%), of them 7 (4.9%) were blood culture positive, 4 (2.8%) catheter tip positive and in 4 (2.1%) cases both blood and catheter tip cultures were positive.
Blood culture yielded E.coli in 4 cases and one of each of Staphylococcus Aureus, Staphylococcus epidermidis and Enterococcus.Catheter tip grew Staphylococcus Epidermidis in two cases and Staphylococcus Aureus and Enterococcus each in one case.