We report a rare case of congenital unilateral hypoplasia of the lung without any other anomaly at . A 7-month-old male infant presented in emergency room with respiratory distress. There was no history of cough and wheeze. X-ray revealed left sided non homogenous opacity along with right sided hyperinflation. A suspicion of foreign body was made on chest X-ray but bronchoscopy was deferred in view of bilateral equal air entry and absence of wheeze. CT scan showed left upper lobe hypoplasia. Child recovered with supportive therapy and was discharged home. To the best of our knowledge unilateral lobar malformation of the lung is an extremely rare entity and few cases have been reported so far.

Pulmonary agenesis is associated with failure of lung development beyond carina. Unilateral absence of a lung/ a lobe (hypoplasia) is one of the rare congenital abnormalities and rarer than complete absence of one lung.3 It usually affects right and middle lobes together.
Congenital lung lesions in children may involve the lung parenchyma, bronchi, arterial supply and venous drainage. The age of presentation is variable and depends on the type of lesion present. Some lesions may present with respiratory symptoms at birth or may be detected incidentally either before or after birth as shown in previous isolated case reports.4 If not complicated by other anomalies it is quite compatible with life. It is generally asymptomatic, detected in childhood or accompanied by an infection.  Children can present by superimposed bacterial or mycobacterial infections, as shown in two case reports from India.5 Recurrent episodes of wheezing/pneumonia may be present, as in this case. Males are more frequently involved than females.
Pulmonary agenesis is commonly associated with other congenital anomalies (Table) but rarely, it can occur 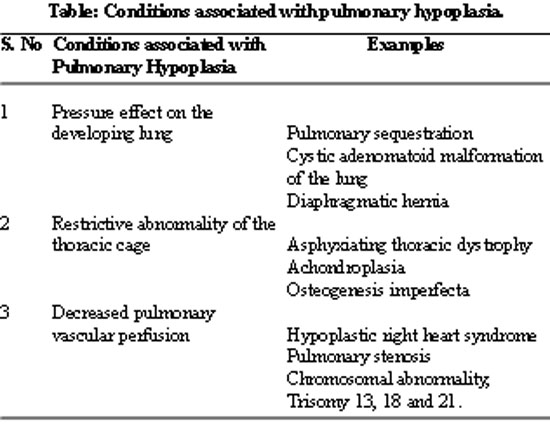 as an isolated abnormality as evident with our patient. The common congenital anomaly associated with its tracheo esophageal fistula especially if the pulmonary pathology is on right side, while left lung abnormality is mainly associated with tracheo-esophageal fistulas without esophageal atresia. Pulmonary hypoplasia can be primary as a developmental defect or it can be secondary to any condition that causes stunted growth of the lung/lungs in the utero. For example: congenital diaphragmatic hernia. Our patient showed no other congenital abnormality which therefore, suggested a primary defect, in this infant.
Diagnosis is usually made by chest X-ray, CT scan and hence, invasive procedures like bronchography, bronchoscopy and angiography can be avoided.6 No treatment is required in asymptomatic cases.
Treatment is necessary for chest infections that should be managed vigorously. These patients are at high risk for any surgery because of low respiratory reserve; therefore, one should take appropriate precautions during anaesthesia. Overall, prognosis depends on two factors. First, the severity of associated congenital anomalies. Secondly, involvement of the normal lung in any disease process.

Although rare, unilateral lobar agenesis/ lung hypoplasia can present with repeated chest infections. Therefore, the entity should be kept in mind and suspected when a chest X-ray reveals bony asymmetry and opaque hemi thorax with mediastinal shift. With the advent of C-T scan, invasive procedures like bronchography, bronchoscopy and angiography can be avoided to establish the diagnosis.
We strongly advise C-T scan in patients with persistent opacities on X-ray chest. Vaccines like Influenza and Pneumococcal should be instituted to prevent fulminant infections.

A seven month old male infant presented with complaints of low grade fever and mild respiratory distress. There was a history of a similar episode 3 months back when he was admitted in another hospital where X-ray chest showed non homogenous opacity involving the whole of left hemi thorax. He was treated as pneumonia with intravenous antibiotics and was discharged home after 3 days. He remained perfectly well thereafter. The perinatal and developmental history was normal. No parental consanguinity was present. The infant had a normal weight and length for age and was well nourished. There was no obvious congenital abnormality.
Chest examination showed mild tachypnea with bilateral equal air entry, absence of wheeze and normal vesicular breathing. Rest of the examination was unremarkable. His X-ray chest (Figure-1) showed complete non homogenous opacity of left hemi thorax with compensatory hyperinflation of right lung, shifting
The child remained well and was sent home without any treatment. He is being followed on outpatient's basis, thriving very well and found to have no complications associated with his lung anomaly. of mediastinum to left side with no apparent evidence of a foreign body. During this recent episode, he was treated with Inhaled nebulizers and intravenous antibiotics. Child responded well clinically despite having persistent radiological findings on repeat chest X-ray. Therefore, C-T scan chest was planned that showed (Figure-2) unilateral hypoplasia of the left upper lobe with compensatory hyper-expansion of right lung and no evidence of foreign body. Unilateral absence of a lung /a lobe (hypoplasia) is one of the rare congenital abnormalities.1 Such lesions may present with respiratory symptoms at birth or may be detected incidentally. It is generally asymptomatic, or may be symptomatic with recurrent episodes of wheezing and/or pneumonia. Diagnosis is usually made by X-ray and C-T scan.2
Asymptomatic cases generally do not require any treatment. Recurrent chest infections should be treated aggressively in patients with absence of a congenital lobe.