Pleomorphic carcinomas are primary malignant tumours that are known to arise in the lungs, pancreas, gall bladder and intestine. A patient with polypoid tumour of the esophagus is described in this report. The patient presented with dysphagia. Diagnostic and therapeutic intervention required endoscopic evaluation and treatment. Benign esophageal tumours are rarely seen and originate from the upper third of esophagus. We observed an esophageal tumour which was interpreted as spindle cell carcinoma of the esophagus that caused obstruction. We present the clinical picture and histopathological findings of the tumour. To our knowledge this is the first local report of spindle cell carcinoma occurring in the esophagus and describes its endoscopic and histopathological features with distinctive biphasic morphology.

Spindle-cell carcinoma is a malignant tumour accounting for 0.1%-1.5% of all esophageal tumours.1,2 It is composed of carcinomatous and sarcomatous components and has been reported to occur in the uterus, vagina, lungs, oral cavity, larynx, thyroid, urinary tract and esophagus. Microscopically, they are biphasic tumours composed of squamous cell carcinoma admixed with a spindle sarcoma-like stroma.3 On immuno-histochemical analysis, the spindle cells react with keratin or vimentin and with both in the same tumour as in our case.

A seventy year old man presented to the gastroenterology clinic in May, 2008 with dysphagia for solids present for five years. He did not give history of anorexia and weight loss. He was a smoker but did not have  a history of alcohol intake. On examination, his vital signs were intact and systemic examination was normal. An upper endoscopy (EGD) demonstrated at 24 centimeters (cm) from the incisors a 2.5 x 1.5 x 1.5 cm pedunculated polypoidal tumour with extensive ulceration of the mucosal surface with foci of haemorrhage and ulceration. The polypoid lesion was removed at endoscopy with a snare. Chest radiography and computed tomographic scan showed no pulmonary lesion. On histology, the lesion was predominantly composed of short fascicles of spindle shaped cells with variable amount of intervening collagen and multiple variable sized blood vessels (Figure-1). 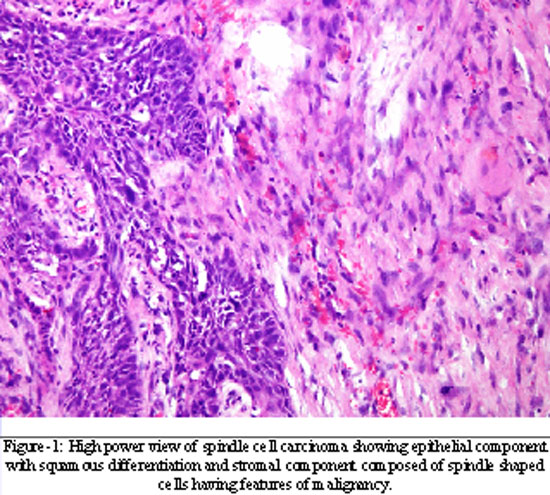 The tumour cells had moderate to abundant eosinophilic cytoplasm and tapering cytoplasmic ends. The nuclei were round to oval showing coarse chromatin and prominent nucleoli. In areas marked nuclear atypia is appreciated. There was brisk mitotic activity with multiple atypical mitotic figures. Entrapped within these spindle cell areas, were multiple interconnecting lobules and nests of polygonal squamoid cells showing severe dysplasia and keratin pearl formation. There were areas showing invasion in the stroma by these squamous cells. Cystic degeneration of these epithelial nests was also noted. The lesion reached the painted margin of excision. Immunohistochemical profile of the tumour cells showed vimentin was positive in the spindle cell component, cytokeratin AE1/AE3 in epithelial component and cytokeratin 5/6 in epithelial

component (Figure-2). One month later, an esophagogastrectomy was performed. Postoperative recovery was good. Two months later, the patient presented with bronchopneumonia. There was an atelectasis of the lower right pulmonary lobe due to an occlusion of the main right bronchus by a tumour mass. No further intervention followed. The patient died one month after the presentation of his symptoms. No autopsy was performed.