Objective: To scrutinize all colonic biopsies and document the prevalence and pattern of various colonic diseases amongst the patients presenting at a tertiary care .
Methods: We examined the record of all colonic biopsies, processed at Histopathology Department of ; Jeddah from January 2002 to July 2007.
Results: The colonic biopsies received during the study period were 711. Biopsies showing inflammatory, non-specific/infective and other miscellaneous colonic lesions were 477. Out of these, 181 patients showed non-specific colitis, 122 showed ulcerative colitis and 15 cases were of Crohn's disease. Of the 107 benign polyps seen, the most dominant was adenomatous polyp. Out of 99 malignant cases, 94 showed adenocarcinoma.
Conclusions: Among Inflammatory bowel diseases, Ulcerative colitis is an important disease in our society. Tubular adenomas are the most common type of polyps and adenocarcinoma is the most common malignancy of the colon (JPMA 59:608; 2009).

Disorders of colon account for a large portion of human disease. Inflammatory bowel diseases (IBD) are represented mainly by Ulcerative colitis (UC) and Crohn's disease (CD) but they also include non-infectious inflammations of bowel.1-3 Researchers have tried to evaluate the frequency of these diseases and their pattern in the Western countries,4-9 Saudi Arabia10-17 and its neighbouring countries.18-20 Epithelial tumours of intestine are a major cause of morbidity and mortality worldwide.21 The colon is host to primary neoplasms more than any other organ in the body.21 Colorectal polyps are common, with large geographical variation.22 There is circumstantial evidence that most cancers develop from polyps.22 Non-neoplastic polyps include hyperplastic, hamartomatous, inflammatory polyp (pseudopolyp) and lymphoid polyps. Adenomatous polyps are segregated into three types, based on epithelial architecture, named tubular, villous and tubulovillous adenomas. Adenocarcinomas comprise 98% of all cancers in colon.21 Colorectal cancer (CRC) is one of the most common malignancies in the world.22 The objective of our study was to scrutinize all colonic biopsies to see the prevalence of various colonic diseases presenting at King Abdul Aziz University Hospital. This hospital is a tertiary referral centre situated in the western region of . This data may provide a comparison for researchers working elsewhere in the Kingdom.

Patients with colonic abnormalities, presenting at our hospital were examined by flexible colonoscopy after obtaining informed consent. Colonic biopsies were taken from appropriate mucosal sites. At the time of endoscopic examination, clinical data and endoscopic findings pertaining to the patient were entered into the request form.
Formalin fixed biopsies from each patient were routinely processed and a 5 micron thickness tissue section was produced and stained with haematoxylin & eosin stains. Special stains like Zeihl Nelson (ZN), (PAS), (GMS) and Giemsa were also used for the respective specific lesions. Tumour markers for epithelial, mesenchymal, neuroendocrine, and lymphoid were done in suspected malignant cases. The slides were examined by consultant histopathologists of the department. Record of all the colonic biopsies, processed at Histopathology Department of King Abdul Aziz University Hospital, Jeddah was analyzed from January 2002 to 17th July 2007. Available clinical and endoscopic findings were also noted. Examination of histopathology reports and archival material was done on selected cases. Patients who had inflammatory or infective/non specific colitis were separated from specific diseases like Tuberculosis, Shistosomiasis, melanosis coli or foreign body granulomas. Biopsies of benign polypoidal lesions were separated from the malignant tumours. Normal tissues i.e. biopsies with no pathological diagnosis and insufficient biopsies were separately calculated.  Patients who were positive for IBD were divided into five age groups as follows:
Children: 1 to 14 years.
Adolescence: 15 to 19 years.
Young adults: 20 to 40 years.
Adults: 41 to 60 years.
Older people: Greater than 60 years. 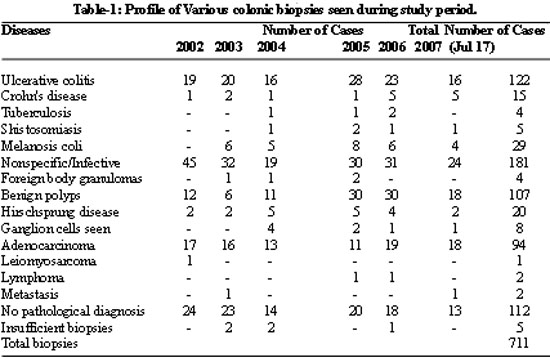 profile of various colonic biopsies seen in this study period. However, no characteristic trend of any particular disease was seen. Out of the total number, 477 biopsies showed inflammatory and non-specific/infective lesions as seen in the Table-2. Patients with UC were 122, of which 65 were males and 57 females, age range 4-73 years. 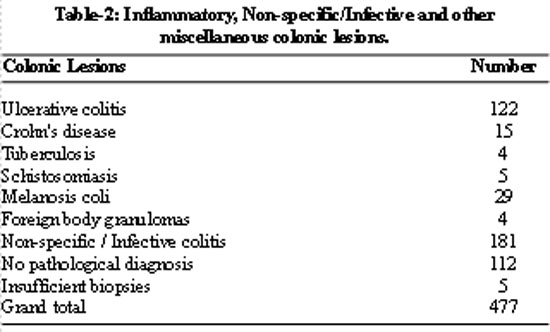 Majority of the patients were adolescent and adult age group as shown in Table-3. Histological features of IBD identified in our cases included chronic inflammatory cell infiltrate, cryptitis and crypt abscesses which were more common in UC than CD patients. Crypt distortion and goblet cell depletion were seen equally in both diseases. In some cases differentiation from infective colitis was difficult. Crohn's disease and ulcerative colitis have different clinical courses and natural histories, and in most instances on the basis of H&E biopsy features, one can be favoured over the other. In the present study, we utilized all clinical, endoscopic and histological data to make confident diagnoses in all the IBD cases (either CD or UC) such that no patients were labeled as "indeterminate colitis. Fifteen cases of Crohn's disease were seen. Table-3 shows age and gender distribution of these CD cases. A total of 107 colonic polyps were seen in the study period which included Juvenile polyp (1), Hyperplastic polyps (14), Tubular Adenomatous Polyps (65), Villous Adenomatous polyps (8), Tubulo- villous polyps (16) and  Inflammatory polyps (3). 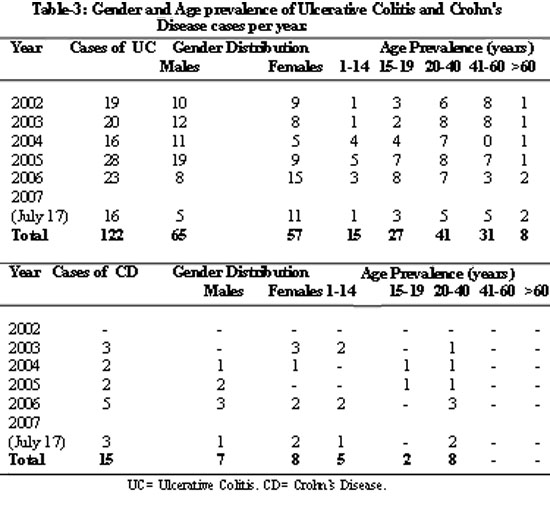 Colonic conditions like infections, idiopathic inflammatory bowel diseases, polyps, motility disorders and colorectal tumours are the important lesions which often require colonic biopsy for their conclusive diagnosis. Since the report of Kirsner JB and Shorter RG, that IBD of colon are rare or non-existent in Saudi Arabia,23 there have been few reports about the presence of ulcerative colitis and Crohn's disease in the Kingdom.10-17 In our hospital, on an average, approximately 21 patients of ulcerative colitis and 3 patients of CD were seen each year, out of 711 total colonic biopsies. The exact cause of high number of UC patients in our study is not known. Familial clustering, of the disease has been recognized for many years3 and can be one of the possible explanation. We know interfamily marriages are common in , with an increasing trend of such marriages in our society. Other likely possibilities are changing environmental conditions such as eating habits or allergy to food constituents like milk and increased use of oral contraceptives.21 One of the possible reason may be that we may have misdiagnosed some of the infective colitis cases as inflammatory lesion on the basis of  suspicion raised by the clinicians, as pathologist has to correlate histological findings with  clinical data. The differentiation of these two categories can be really difficult particularly in areas where infective colitis is common. Even endoscopic pattern of these lesions may be indistinguishable.12 Some previous series have shown a secondary peak of incidence for new cases of UC, beginning about age 50.24 This was not seen in our cohort of patients.
Colonic polyps are broadly categorized in non-neoplastic and neoplastic polyps. Hyperplastic polyps represent 90% of all non-neoplastc polyps in large intestine.21 In our study out of 107 polyps, 18 were non-neoplastic polyps of these, 14 were hyperplastic polyps. So our number is in close proximity with the internationally recognized percentage. These particular polyps were mostly seen in old age group patients. Inflammatory polyps also known as pseudopolyps were seen in only two cases of IBD. They represented islands of inflamed regenerating mucosa surrounded by ulceration. This is in conformity with the finding that such polyps arise primarily in patients with severe active IBD.21 Among neoplastic polyps, colon is the most favourite site for tubular adenomas.21 In our study we also found this polyp to be the most common type i.e. 65 cases of tubular adenomas.
There is circumstantial evidence that most colorectal cancers (CRC) develop from neoplastic polyps. The risk of CRC increases with polyp size, number of polyps, and histology type.2121 Older age is an established risk factor for CRC.25 In our hospital most of CRC cases were of an older age. The concept of an adenoma-carcinoma sequence has been supported by pathological, molecular genetic and cell biological findings.25 In our study, the number of adenomatous polyps was reasonably high and we also saw quite a number of adenocarcinomas. This may reflect similar findings as shown in the above mentioned studies that wherever number of adenomatous polyps is high, possibility of carcinomas is also increased.
The findings of our study do not mirror the exact prevalence rates of these colonic lesions in the general Saudi population of western region, as although we are working in one of the most busy referral hospital of our area, but we believe that our research is quite limited in many aspects. Total number of our cases were not enough to make any final conclusion. Some of our outdoor patients, particularly females, were advised for colonic biopsy but they did not turn up for this investigation, may be due to social or other reasons. In many of our cases we also felt the lack of clinical information. However, in spite of our limited experience we conclude that among IBD, UC is one of the important entity in our society. Tubular adenomas are the most common type of polyps and adenocarcinoma is the most common malignancy of colon seen in these patients. We suggest that a wide based study should be done by close cooperation with various medical centres of our area to know the exact incidence and pattern of different colonic diseases prevailing in this part of Kingdom.