All adult patients' (> 20years of age)' charts with ICD codes for laparoscopic appendectomy between 1st Jan 2004 to 31st Dec 2004 were reviewed and data was used in this study. The information reviewed also included; age, sex, operation time, qualification of the surgeon (to note whether specialized training was absolutely necessary for this kind of technique or not), time taken for bowel function to restore, use of analgesia, post-operative stay and total charges. Patients operated by all general surgery faculty and residents for appendicitis were included. The procedure was performed both as an elective case for missed and interval appendectomy, and for acute appendicitis. Complete data of all patients who were admitted through the Emergency Department for surgery, with no known co-morbidities, and no previous lower abdominal surgeries were included for chart review. Patients who were identified to be at high risk for general anaesthesia, had a past history of lower abdominal surgeries, signs of perforation, or pre-existing diseases were excluded.
Data was collected by reviewing patient records, hospital charts, hospital bills and patient formulary record. Each patient chart, file and bill was checked by a second year surgery resident and personally by the author; separately to assure quality and validation of the data collected. This data was then merged and entered in SPSS by the second year resident and further validation of the results was done and results were rechecked. For categorical variables, frequencies and proportions were calculated whereas for continuous variables the mean and standard deviation were calculated. We also conducted t-test and chi-square in order to assess the association of certain variables with the type of appendectomy. 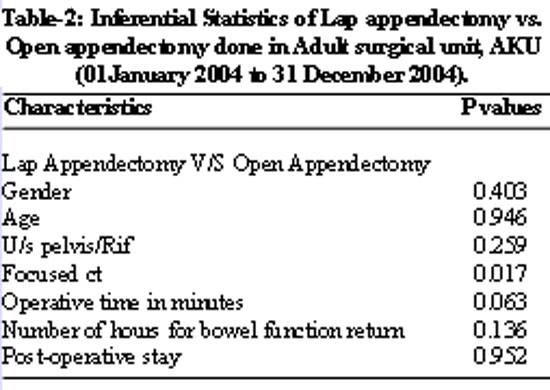 We thank Dr. Khurshid Khowaja, Director Nursing, for encouragement and guidance, Dr. Sanah Baig, Writer-in-Residence; we would also like to express our utmost gratitude towards the patients whose charts were reviewed for this paper.