Preterm birth and its consequences remain a major health problem. The incidence is reported to be 8-10 % causing increased perinatal morbidity and mortality and subsequent neurodevelopmental problems such as cerebral palsy.1 The aetiology of preterm birth is multifactorial but there is now well accepted evidence to implicate infection as a cause in upto 40% of cases.2 Preterm labour due to infection is refractory to the use of tocolytic agents. A number of urogenital tract infections are known to increase risk for preterm birth. The microecologic condition that characterizes bacterial vaginosis includes replacement of normal protective vaginal flora (Lactobacillus crispatis, Lactobacillus jensenii) with an overgrowth of numerous bacteria with high potential for tissue invasion and inflammatory response. Co-infection with sexually transmitted infection leads to further activation of immune responses. The process of tissue invasion and inflammation produces enzymes and immune stimulators (cytokines) in the vagina and uterus that may promote cervical ripening and weakening of foetal membranes. Stimulation of the immune protection response also results in prostaglandin production that increases uterine contractions.
Bacterial vaginosis (BV) is defined as a polymicrobial condition characterized by replacement of normally dominant lactobacilli by an overgrowth of anaerobic commensals in the vagina which includes microaorganisms like Gardnerella Vaginalis, Mobilincus, Mycoplasma Hominis, Ureaplasma Urealyticum and Prevotella.3 The term bacterial vaginosis was adopted to reflect the polymicrobial alteration in vaginal flora causing an increase in vaginal pH, sometimes associated with an homogenous discharge, but in the absence of a demonstrable inflammatory response.4
Women with symptomatic bacterial vaginosis usually present with a thin, gray-white, homogeneous discharge that tends to adhere to the vaginal wall.5 Vulvar pruritis and/or irritation is not common with BV; however, it may occur.6 The characteristic fishy odour results primarily from metabolic by-products of anaerobic bacteria. The odour is usually more noticeable after menses and intercourse due to the alkalinity of blood and semen.6 In whiff test the amine release that produces the sharp or fishy odour associated with bacterial vaginosis can be reproduced in the clinic by the addition of potassium hydroxide (KOH) to vaginal fluid. Luni Y7 in a study at hospital concluded that the Amsel criteria for the diagnosis of bacterial vaginosis is rapid, reliable and an inexpensive method of diagnosis. The presence of clue cells signifies the presence of disease with 90% or greater specificity. In a local study by Shabbir et al8 at PMRC Lahore, pH and amine test were found to be rapid and inexpensive methods of diagnosing bacterial vaginosis.
Keeping in view the high complication rate associated with preterm birth and the importance of recognizing and diagnosing intrauterine infection, a study was designed and conducted in the labour ward of MH Rawalpindi to determine the frequency of bacterial vaginosis in cases of preterm labour.

It was a descriptive cross sectional study including all pregnant women from 24 weeks gestation onwards and before 37 completed weeks of pregnancy with a singleton pregnancy and cervical dilatation of > 3cm with labour pains.
The exclusion criteria were pregnancy with medical disorders, Polyhydramnios and cervical incompetence.
All women found eligible for the study were registered. Demographic information like age, parity and gravidity were recorded. Hundred patients reporting in preterm labour were included. Fundal height, foetal lie and foetal heart sounds were also noted. Pelvic examination was done to confirm preterm labour. Cervical dilatation was noted along with the presence or absence of leaking.
Any vaginal discharge was noted by exposing the vagina with a sterile non lubricated vaginal speculum. An objective diagnosis of the type of discharge was made. The vaginal pH was measured half way down the lateral vaginal wall by means of a narrow range pH strip.
Samples for bacterial culture were obtained by rotating a sterile cotton swab over the lateral vaginal wall and then placing in Stuart's transport medium until further processing. A wet smear of the vaginal secretions was made and seen under the microscope for the presence of clue cells. Whiff test was performed by placing a few drops of 10% KOH on a glass slide mixed with the discharge; a rotten fish odour rendered the amine test (Whiff test) positive. Baseline investigations like complete blood picture, urine and timed blood sugar examination were recorded. All this information was recorded on a specially designed proforma. Three of four criteria were met to establish accurate diagnosis of bacterial vaginosis in most of the affected women i.e. homogeneous vaginal discharge, the "whiff test", presence of clue cells (greater than 20%) and vaginal pH greater than 4.5. The collected data was entered into SPSS version 12 for analysis.

The number of admissions in the labour ward during that period were 4857. The number of women diagnosed with preterm labour were 378. Out of these, 100 patients were selected for this study as they fulfilled the inclusion criteria.
The rate of preterm labour is about 7.8% in our set up, bacterial vaginosis was detected by Amsel's criteria in 21%. Patients with a pH > 4.5% were 27% (Figure-1). 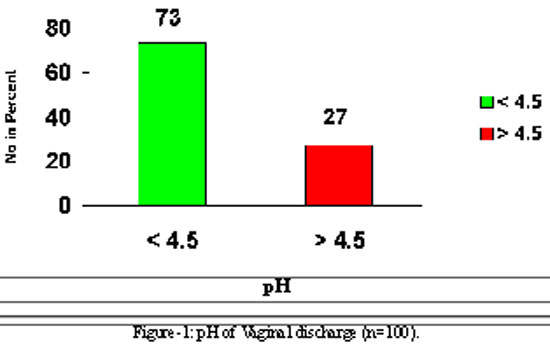 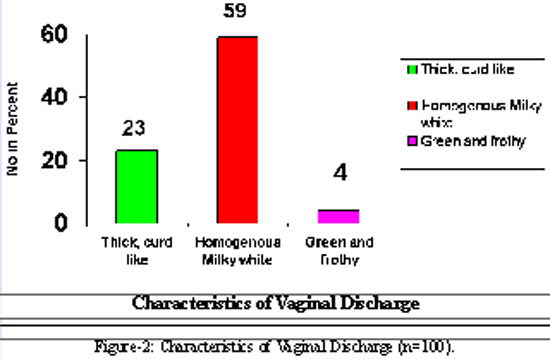 was thick, and curd like (Figure-2). Clue cells was diagnosed on a wet smear in 25% of the patients. The detection of clue cells on direct microscopy is the single most sensitive and specific criterion for the diagnosis of bacterial vaginosis and is regarded as pathognomonic of bacterial vaginosis. The presence of clue cells signifies the presence of disease with 90% or greater specificity. Out of the 100 patients, 18 had growth of Mycoplasma hominis and Gardnerella vaginalis and were thus labeled positive for 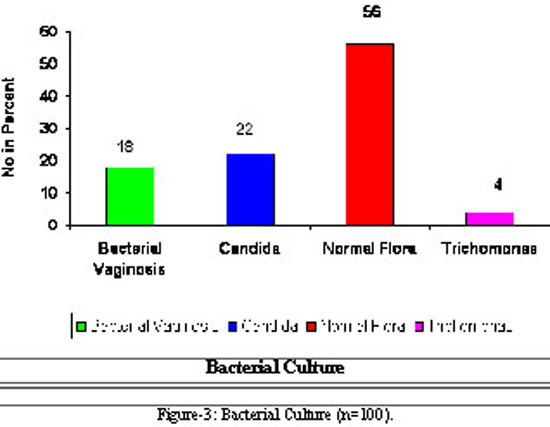 bacterial vaginosis. Four cases showed the growth of Trichomonas vaginalis. Candida was present in 22% of the cultures while 56% of the patients had normal vaginal flora (Figure-3). The culture report was positive in lesser number of patients compared to the Amsel's criteria.