This comparative cross-sectional study was conducted in at Islamic International Medical College (IIMC) in collaboration with Combined Military Hospital (CMH) and Armed Forces Institute of Rehabilitation Medicine (AFIRM).
All the diabetic patients were taken from the outpatient department of CMH, . On arrival of the patient the details of study were explained and written informed consent was obtained. All the patients were selected by purposive sampling.
Relevant complaints regarding neuropathy were noted. History of neuropathy was carefully taken to avoid inclusion of cases due to any other cause of neuropathy. The patients were booked on the basis of selection criteria. For inclusion, the patients had to be diagnosed type 2 diabetics between 25-61 years (male or female) with duration of known diabetes greater than one year and with intact and normal sites to be tested. If there was evident neuropathy, it had appeared after the onset of diabetes. All the patients with any other type of neuropathy, diagnosed or suspected, were excluded from the study. The patients with acute or chronic musculoskeletal disorder, poor compliance, pregnancy and taking drugs which may improve, mask or aggravate the normal course of neuropathy; for example pyridoxine, NSAIDS, metronidazole, hydralazine and isoniazid were excluded from the study.
The clinical neurological examination was conducted to confirm symmetrical diabetic neuropathy and then to grade it according to the scores mentioned. After examining 80 patients a total sample of 60 diagnosed type 2 diabetic patients (N = 60) were selected. The patients having clinically undetectable neuropathy were placed in group 1 (n1=30) and those found to have detectable neuropathy were placed in group 2 (n2=30) on the basis of DNS and DNE. The patients were checked on both sides for each score to confirm symmetry. They were labeled to have clinically detectable neuropathy if DNS was > 1 (max: 4) or DNE was >3 (max: 16). Undetectable neuropathy was labeled if DNS was < 1 or DNE was < 36. Blood sugar fasting was checked in all the patients with the help of glucometer (Ascensia Elite) by Bayer to assess the glucose level and control.
Nerve Conduction Studies were done at room temperature of 23 ± 2 ºC. For all studies, the machine used was Keypoint work station ().
The simplified nerve conduction studies (NCS) protocol12 was followed which is as under:
1) Sural sensory and peroneal motor NCS were performed in one lower extremity. If both studies were normal, NCS was discontinued.
2) If sural sensory or peroneal motor NCS were abnormal, NCS of at least the ulnar sensory, median sensory, and ulnar motor nerves in one upper extremity were done.
3) If a response was absent for any of the nerves (sensory or motor), NCS of the contra lateral nerve was performed.
4) If a peroneal motor response was absent, an ipsilateral tibial motor NCS was performed.
All the data was recorded on pre designed questionnaire proforma which was later transferred to the SPSS version 10 for analysis.
Measuring the variables of NCS:
In all the six nerves amplitudes, velocities and latencies were individually assessed. They were assigned numerical grades of severity according to their values and then net score was assigned to each variable labeling them as normal or mild, moderate or severe neuropathy according to the average of 2 to six nerves2. Presence or absence of neuropathy was labeled as outcome. Overall score (grade) was assigned to NCS again as normal, mild, moderate or severe neuropathy according to the scores of amplitudes, velocities and latencies. All the scoring was done manually and later transferred to the computer.
Statistical Analysis
Pearson chi square test was used to compare the group 1 and group 2 with the findings of NCS. Amplitudes, velocities and conduction velocities, outcome (presence or absence of neuropathy) and grading (mild, moderate and severe neuropathy) all were compared in each group with the findings of the DNS and DNE to assess their evaluation of diabetic neuropathy. 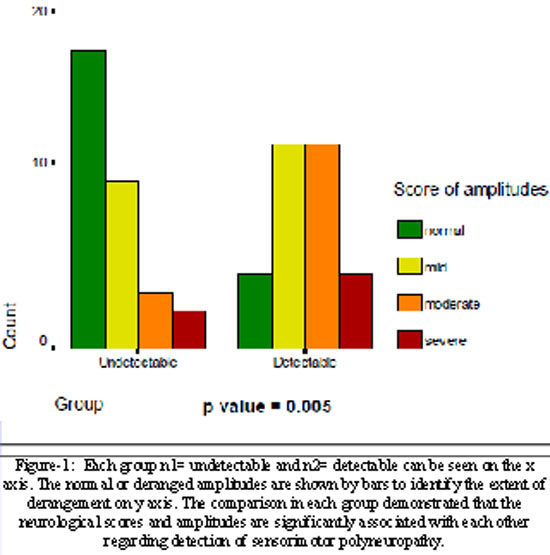 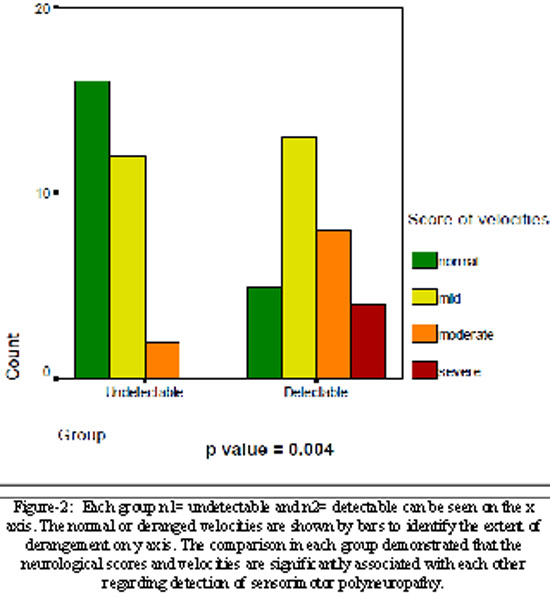 deranged overall scores of NCS identified the extent of derangement. The comparison in each group demonstrated that the neurological scores and grades of NCS are significantly associated with each other regarding detection of sensorimotor polyneuropathy. It can be interpreted that the more the neurological scores had deteriorated, the more were the chances of further deranged NCS scores.

The detection and grading of diabetic neuropathy is an area of ongoing interest for the researchers and clinicians, not only for diagnosing and managing it earlier but also for understanding the disease which is still under exploration. Mostly nerve conduction studies have been accepted as an essential part of diagnosis for DPN as it has many benefits.13,14
When comparison of nerve conduction studies was done with detection scores in each group, though NCS detected more cases of neuropathy than the scores, there is significant association between clinical scores and NCS or its major components. The results and figures (1, 2 and 3) show that both clinical tests and NCS have a value in detecting cases of peripheral neuropathy. The NCS however is more powerful in detecting neuropathy which shows that NCS is helpful in detecting sub clinical neuropathies also.
Similar results have been obtained by most of the studies. A study in supports the fact that sub clinical neuropathy can be detected by NCS.15 In this study results are based on a large sample size. According to them sub clinical diabetic peripheral neuropathy can be detected by electrophysiological tests which support our results. Recently Rota et al. found similar results in a study where thirty nine patients went through a clinical protocol according to Michigan Neuropathy Program and NCS.16 The Diabetic Neuropathy Index, a standardized examination developed as screening instrument in the outpatient setting, and the Diabetic Neuropathy Score (DNS), were calculated and their concordance with the NCS results was evaluated. Since exactly the same proportion (82%) of subjects who scored positively on the DNI showed electrophysiological alterations on the NCS, and so according to this study, both ways of investigations seem to be equally sensitive in detecting neuropathy. In our study NCS has proved to be a more powerful indicator of neuropathy than clinical examination especially in the sub clinical group though the latter also has its value in detection of neuropathy. Sub clinical group was not included in the study by Rota et al. In a previous study carried out in newly diagnosed diabetic patients, Rota et al. also found, by means of NCS, a surprisingly high prevalence of electrophysiological alterations; particularly, reduced sural nerve action potential (SNAP) amplitude was observed in the median and ulnar nerve in about 70% of the patients.17 It was concluded that upper limb sensory nerves conduction studies, letting exploration of more distal involvement as compared to sural and peroneal nerves, are highly sensitive in detecting early signs of neuropathy. This aspect of Rota et al's study is very interesting and can be explored in further studies in our area.
In , Niazi et al. evaluated diabetic polyneuropathy by doing electrodiagnostic study on fourty-one patients in 2001.7 Though clinical examination was done in detail, no statistical comparison was made between the clinical findings and nerve conduction studies. However it was suggested that these studies are capable of diagnosing diabetic neuropathy even before clinical manifestations, which has been proved in our results.
Screening should be done on regular basis for sub clinical cases to avoid the complication as according to recent suggestions by American Diabetes Association the purpose of screening is to identify asymptomatic individuals who are likely to have diabetes or pre- diabetes. Separate diagnostic tests using standard criteria are required after positive screening tests to establish a definitive diagnosis.18
All the basic components of NCS were compared in each group. According to results, in all the components, amplitudes are the strongest measures of neuropathic problems and then are the other components. A latest study by Hsu WC et al.19 concludes that sural amplitudes and peroneal motor conduction velocities can be used as only markers for neuropathy. The same nerves were included in our study as initial screening for assessing nerve function.
Aring et al.20 concluded in a review that value of clinical examination has been recognized by different health care centers and there are suggestions to evaluate small nerve fibers with temperature, light, or pinprick testing and to test large nerve fibers by vibratory sensation, position sense, muscle strength and reflexes. Meijer et al.6 studied that role of basic test like tuning fork may still have better value than modern test like monofilament. It was concluded from this study that use of the 128-Hz tuning fork is a valid and reliable test for screening purposes and manageable in clinical practice. They claimed that the tuning fork deserves a central role in diagnosing diabetics for neuropathy. However its role was not compared with the nerve conduction studies for evaluation of patients. We also included tuning fork testing in our clinical scores but our results were different. Though vibration perception was impaired in some cases of neuropathy but we found that reflexes were lost in most patients with diabetic neuropathy in our population. So we believe that it is not the test of choice for detecting maximum cases of neuropathy.
Clinical examination can detect and grade neuropathy in majority of cases. However NCS was more powerful than any other test to detect the diseased cases in our study. Therefore we can use each, NCS or clinical examination for detecting and grading diabetic neuropathy and using both gives us a better chance for earlier diagnosis and more precise grading of neuropathy.

The physiological properties of nerve and muscle are usually modified due to pathophysiological changes resulting from many diseases like diabetes.1 Diabetic sensorimotor polyneuropathy (DSPN), the most common complication of diabetes can be assessed clinically and electrophysiologically.2,3 The DSPN should be assessed independently and if assessed with other kinds of neuorpathies occurring in diabetes like compressive or truncal neuropathy, it may mask the individual evaluation of each kind.4 This is also supported by the fact that the DSPN can exist independently without involvement of autonomic neuropathy.5
There is a role for Diabetic Neuropathy Symptom (DNS) and Diabetic Neuropathy Examination (DNE) scores in detecting DSPN.6 Symptoms usually develop at any degree of neuropathic impairment or may not occur at all which indicates the need for doing nerve conduction studies (NCS).7 It has also been seen that abnormal changes in glucose levels do result in different types of nerve derangements including axonal injury or demyelination.8 The neuropathy, whether demyelinating or axonal, can be determined on the basis of nerve conduction studies.
The DSPN if diagnosed earlier by improving the already used methods in our set up can help to pick up those patients who are at risk of complications like foot ulcers which may eventually end in amputation.9 In many instances type 2 diabetes can be effectively treated, at least in the initial stages and the early and precise detection can help in better understanding the pattern of patho-physiological changes as well as in controlling crippling illness like peripheral neuropathy. 10,11