Objective: To analyse the data retrospectively and identify risk factors that may adversely affect mortality in patients aged seventy years and older with coronary artery bypass graft (CABG).
Methods: From Jan 2003 to Oct 2007, 63 consecutive patients of 70 years or older underwent primary isolated CABG on cardiopulmonary bypass (CPB) in Department of Surgery, . Forty one (65%) were male. The mean age was 72.7 ± 3 years (range 70 to 81 years). Preoperatively 83% were in New York Heart Association (NYHA) class III or IV. Left main stem (LMS) lesion (>70%) was present in 20 (32%). Renal impairment (RI) with creatinine more then 2mg/dl was present in 9 (14%) patients. History of prior stroke was present in 7 (11%). Emergency surgery (within 48 hours after Myocardial Infarct (MI)) was performed in 33 (52%) patients.
Results: The overall hospital mortality (30 days) was 9.5%. The mean Parsonet score was 23 ± 3, and 10 ± 3 in those who died or survived respectively. Mean intensive care unit stay was 2.3 ± 0.7 days, mean ward stay was 6±3 days. Preoperative LMS lesion or MI less then 48 hours, poor left ventriculal function, prolonged CPB time and post operative stroke were the significant independent predictors of operative morality.
Conclusion: CABG can be performed in a selected elderly population. Careful attention to risk factors associated with high mortality can be helpful in improving post-operative morality. Age in itself may not be responsible for high morality (JPMA 59:587; 2009).

The number of elderly patients undergoing coronary artery bypass surgery (CABG) and valve replacement continue to increase.1 As many as 40% of all elderly have symptomatic cardiovascular disease, which accounts for more than half of the morality in this age group.2 Evidence is growing that such surgery can result in improvement in health status, functional status, longevity and quality of life in these patients.3-5
The aging surgical population, not unexpectedly, has a relatively greater prevalence of cerebrovascular disease, left ventricular dysfunction, diabetes mellitus, chronic obstructive pulmonary disease, renal impairment and peripheral vascular disease.5-7 Therefore, such elderly people with multiple co-morbidities tend to have a high rate of complications and cost after CABG.6,8
Data was collected from the surgical department of Liaquat National Hosptial to identify risk factors, that may adversely effect mortality in the age group of patients (>70 years) operated for CABG.

Over the five years period from January 2003 to October 2007, 573 patients underwent CABG by a single surgeon and anaesthesiologist in the above named institute. All patients included in the analysis were above 70 years.
Operation was performed according to their merit, emergency (within 48 hours of diagnosis), urgent (within 7 days of diagnosis) and elective (routine, more then 7 days after diagnosis). Redo CABG and CABG with valvular surgery were excluded. A total of 63 (10.9%) patients were evaluated, 65% were male, having a mean age of 72.7±3 (range 70-81) years. The outcome analysis considered was hospital stay, mortality and other complications. The pre and intra-operative variables were compared between the survivors and those who died within 30 days after surgery.
The important variables analysed included, Hypertension, considered with systolic blood pressure > 140 mm of Hg, renal impairment with creatinine > 2mg/dl and left main stem involvement if > 70% stenosis was present.
Single clamp technique was used for proximal and distal anastomosis. Warm intermittent blood (1:4) antegrade and retrograde cardioplegia was used in all cases. Terminal hot shot of blood cardioplegia was given after completion of all ananstomsis before removal of cross clamp. Surgery was performed by one surgeon (MID). Anaesthetic and cardiopulmonary bypass techniques were standardized. The bypass circuit used a hollow fibre membrane oxygenator. Non pulsatile flow was generated by a roller pump, and 40µm arterial line filter was used in all cases. Flow was 2.4 L.min, m2 at 37ºC falling to 1.8 L.min, m2 at 32ºC. Arterial pressure was maintained between 50-70 mm Hg, haematocrit between 0.20 to 0.25, and alpha stat blood gas management was used.
Ethical approval for the study was sought and obtained, from the Ethical Review Board of the hospital.
Data was defined as mean with standard deviation whereas discrete variables were presented as frequencies. Mann Witney U test was used to compare the associated factors for mortality with survivors, with a probability of less than 0.05 considered significant.

The details of the variables studied are shown in Table-1. The overall in hospital (30 days) mortality was 9.5 %. Post operative complications are marked as * in the table. 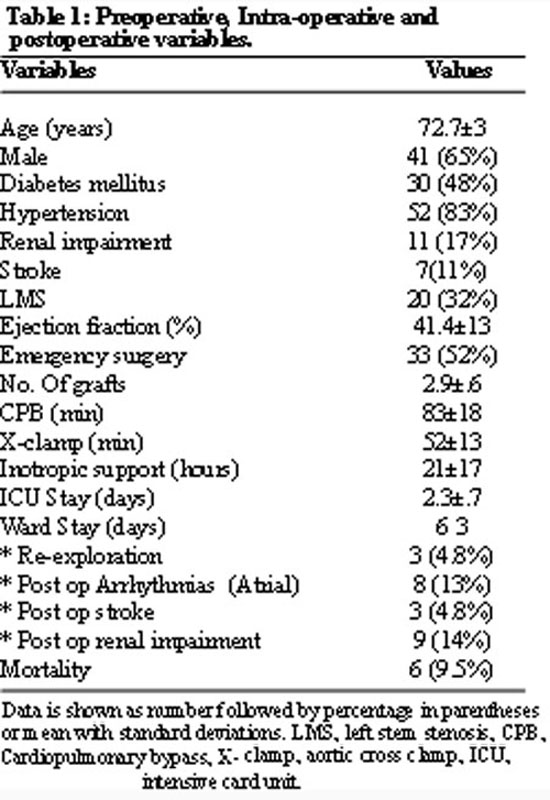 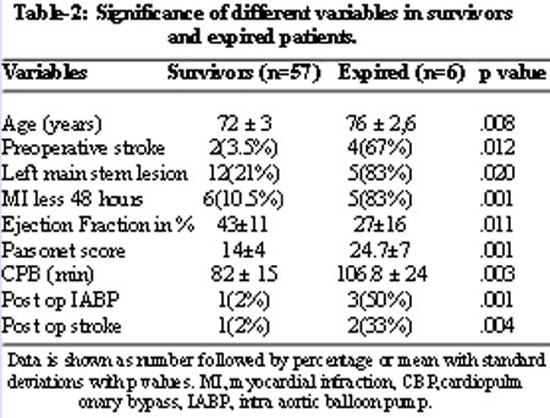 The operative risk including mortality after CABG is higher in elderly than younger group of patients.9,10 The overall mortality after CABG in elderly patients has steadily declined over the years with improvement in surgical techniques and postoperative management.11 Not only the survival benefit but quality of life and functional status have also improved in elderly with CABG.12 Therefore advanced age alone should not be considered a factor by a cardiac surgeon and potential benefit of surgical intervention should not be denied in this age group.13
CABG is not free of risk for any age group. However, related risk factors include preoperative reduced left ventricular ejection fraction (less then 30%), diabetes mellitus, recent MI, LMS lesion, atrial fibrillation, renal dysfunction, chronic obstructive airway disease, obesity and female gender. Intraoperative, lengthy CPB time, emergency operation, reoperation and use of bilateral internal mammary arteries, post operative, atrial fibrillation, mediastinitis and post operative bleeding are related to high post operative mortality and morbidity.10,14,15 The present study analysed the factors which are responsible for the high mortality in old age group. The poor LVF less then 20%, high Parsonet scoring, LMS lesion and prolonged CPB time were responsible for higher mortality in our study group. The reason for higher mortality in surgeries on elderly patients is because most of the risk factors for poor out come as poor LVF, renal impairment, preoperative stoke, LMS disease, recent MI and prolonged CPB time are present. Glower et al noted an inhospital mortality rate of 23% in octogenarian patients with any comorbidities, compared to 7% in patients without any comorbidities.16 In the presented study almost all the patients had al least two comorbidities, which is similar to those cited in other studies.12,17 Our in hospital mortality was 9.5%, and there are different studies showing mortality from 5.6% to 24.3%.18,19 Pertson et al found a hospital mortality rate of 11.5% in 24,461 elderly patients who underwent isolated CABG.20
Although short term outcomes are poorer, the long term benefits seem to be good for most survivors of surgery. An analysis of nearly 25,000 patients aged >80 years who underwent CABG between 1987 to 1990 showed that, in those who survived, the long term survival rate was similar to that of the general population of octogenarians matched for age, sex, and race.20 Another UK based study of 12,461 consecutive patients who underwent isolated CABG between 1996 to 2003 were evaluated. Despite poorer short term outcome, long term survival in the patients >80 years was significantly better compared with the general population of the same age and sex distribution.21
CABG in old age is not only associated with long survival but also effectively relieves   angina and improves quality of life. In a study which used self reported questionnaires in 1744 patients aged >65 years undergoing CABG, significant improvements were noted in quality of life after a 6 months follow up.22 Hendeshian et al23 found that patients aged >70 years presented for CABG at a lower functional level than younger patients, but marked improvement in functional capacity that occurred after surgery was comparable among all age groups.23 More recently, survivors among octogenarians who underwent isolated CABG were found to have an excellent quality of life for upto 5 years after surgery.5
CABG is generally considered safe because of better surgical techniques and pharmacological facilities available. Despite higher preoperative risks, symptom relief occurs in most elderly patients. Long term survival and quality of life are also good in the majority of elderly patients. Therefore, risk benefit profile should be individualised, and each elderly patient must be assessed on his or her own merit. An elderly person with few background illnesses and a good expected quality and length of life is expected to benefit from CABG. On the other hand, an elderly with several comorbidities and an expected suboptimal quality of life after surgery would probably be best managed conservatively.  Therefore, once important risk factors are defined, objective criteria could be established to select the patient for operation. Refined preoperative preparation can be possible and postoperative care could be improved in these elderly patients.
Limitation of the presented study was that it was retrospective and involved small group of patients.
Therefore, it was concluded, that age itself is not responsible for higher mortality rates but there are other associated factors which must be considered before operating on an older age group of patients for coronary artery bypass surgery.