In a descriptive study with permission from Welfare Organization of Hamedan Province, blood smears of all patients in every care centers (170 patients) were taken (5cc). Then serum smears were carried to laboratory for studying and HBs Ag and HCV Ab tests were done in ELIZA. In HCV Ab positive patients RIBBA test was done for confirmation. 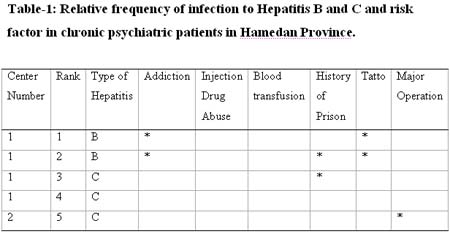 institutions (Table-1).
Hepatitis B patients were in age group of 36-45 years and Hepatitis C patients were all more than 55 years age. All of the HB patients had the history of addiction and tattoo and half of them had a history of living in prisons. Among patients with HC, one had a prison history, another had undergone a major operation and one patient had unknown risk factors. All patients with HBV were married while 2 with HCV were single and one was divorced.