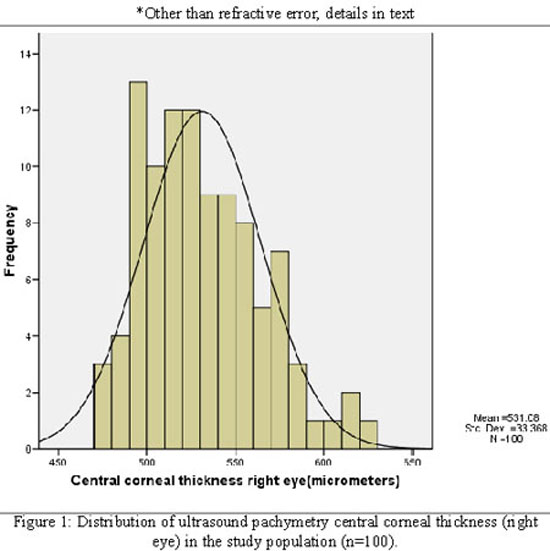 The mean IOP in the right eye was 13.86 (± 2.79) and left eye 13.67 ± 2.68 mmHg.
The median IOP in the right eye was 14.00 mmHg (range 8-22) and in the left eye 14.00 mmHg (range 7-20).
For linear regression/correlation analysis, CCT measurements for the right (not left) eye were chosen. Figure 2 is a scatter plot which shows that there is no statistically significant correlation(r = 0.158, p = 0.12) between CCT and IOP in the study population. There was also no statistically significant linear association between CCT and other 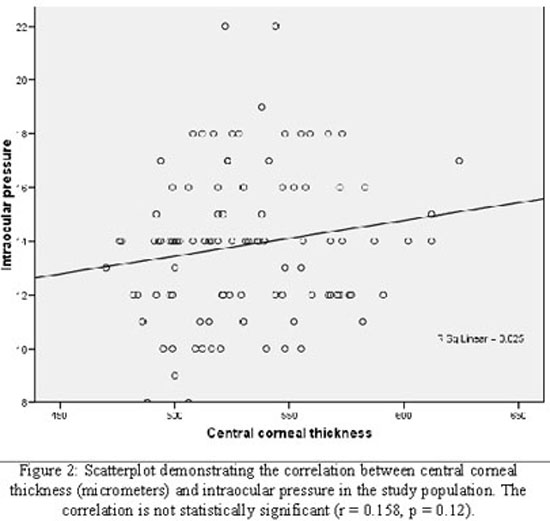 independent variables like age, sex, presence of a co-morbidity i.e. DM, HTN, IHD, existing eye disease, myopia, hypermetropia, systemic and eye medication in use.
Discussion
To the best of our knowledge, this is the first report on the average CCT value in a selected Pakistani adult population. A study from another city in Pakistan,12 looked at the association between IOP and CCT. It did not, however, give the mean CCT value of healthy population. The knowledge of the average CCT in a particular population is required in order to predict the risk of glaucoma in that population. The Ocular Hypertension Treatment Study recognized CCT as a strong predictor for the development of predict the onset of primary angle glaucoma (POAG).13 In this study it was seen that individuals with CCTs of 555 µm or less had a 3 times greater risk of developing glaucoma compared with patients with CCTs of greater than 588 µm.13 The average CCT in our population was 531 ± 33 µm. Extrapolating from that study, would lead us to believe that our population is also at a high risk for the development of POAG.
Racial variation influences CCT.8 This implies that every population will have a unique CCT reading. The varied population bases used by different studies make comparison difficult. However, average CCT of our population (531+ 33 µm) closely matches that of the African Americans (531.0 ± 36.3 µm),8 the Japanese (531.7 µm),14 the Indians (537 ± 34 µm)15 but is significantly different from that of the Caucasian population (558 + 34.5 µm). Population surveys done on Caucasians have been the basis for the definition of the "normal" range of IOP.16 The implications of this difference in average CCT are significant in terms of the correct determination of elevated IOP in our population. Glaucoma patients in our population will need to maintain a lower level of IOP.
Several factors including age, gender , diurnal changes, refractive error, genetic influence and diseases like diabetes have been shown to affect CCT.11,17-19 In our study, we did not find any significant association between diabetes, hypertension, pre-existing ischaemic heart disease, age, sex and average CCT - although our study was not adequately powered to assess this question.
Patients with ocular hypertension and glaucoma have thicker central cornea than their controls. Our study did not have glaucoma patients or ocular hypertensives-- median IOP in the right and left eyes were 14.00 mmHg (range 8-22) and 14.00 mmHg (range 7-20), respectively. This probably means our CCTs values are slightly underestimated. However, changing few data values would not affect the median much because median is not sensitive to the extreme values (unlike mean).
A major limitation of our study was that it was done in a clinic setting. For our study population, we used adults visiting the clinic for executive check-up and not having any known ocular diseases other than refractive error. However, it is not a population based study and is prone to selection bias because the subjects we selected represents only those people who can afford to pay for an executive check up at this hospital, which costs about US$ 200. The next step could be to do a population based study to estimate the mean CCT values, taking into account the socioeconomic factors, ethnic distribution and several other characteristics of the general population.
In conclusion, our hospital-based study reports the average CCT of our population as 531 ± 33 µm. We did not find any significant association between CCT and other variables. The average CCT values of this selected study population closely match those of the African Americans and may be suggestive of a higher risk of development of primary open-angle glaucoma in Pakistani population also. Our study calls for further research aimed to provide unbiased CCT estimate in Pakistani population.
References
1.Resnikoff S, Pascolini D, Etya ale D, Kocur I, Parajasegaram R, Pokharel GP, et al. Global data on visual impairment in the year 2002. Bull World Health Organ 2004; 82: 844-51.
2.Dineen B, Bourne RR, Jadoon Z, Shah SP, Khan MA, Foster A, et al. Causes of blindness and visual impairment in Pakistan. The Pakistan national blindness and visual impairment survey. Br J Ophthalmol 2007; 91: 1005-10.
3.Ehlers N, Bramsen T, Sperling S. Applanation tonometry and central corneal thickness. Acta Ophthalmol (Copenh) 1975; 53: 34-43.
4.Whitacre MM, Stein RA, Hassanein K. The effect of corneal thickness on applanation tonometry. Am J Ophthalmol 1993; 115: 592-6.
5.Hansen FK, Ehlers N. Elevated tonometer readings caused by a thick cornea. Acta Ophthalmol (Copenh) 1971; 49: 775-8.
6.Doughty MJ, Zaman ML. Human corneal thickness and its impact on intraocular pressure measures: a review and meta-analysis approach. Surv Ophthalmol 2000; 44: 367-408.
7.Copt RP, Thomas R, Mermoud A. Corneal thickness in ocular hypertension, primary open-angle glaucoma, and normal tension glaucoma. Arch Ophthalmol 1999; 117: 14-6.
8.La Rosa FA, Gross RL, Orengo-Nania S. Central corneal thickness of caucasians and African Americans in glaucomatous and nonglaucomatous populations. Arch Ophthalmol 2001; 119: 23-7.
9.Lee ES, Kim CY, Ha SJ, Seong GJ, Hong XJ. Central corneal thickness of Korean patients with glaucoma. Ophthalmology 2007; 114: 927-30.
10.Morad Y, Shavon E, Hefetz L, Nemet P. Corneal thickness and curvature in normal-tension glaucoma. Am J Ophthalmol 1998; 125: 164-8.
11.Kiely PM, Carney LG, Smith G. Diurnal variations of corneal topography and thickness. Am J Optom Physiol Opt 1982; 59: 976-82.
12.Mukhtar S. Central corneal thickness and its relation with measured Intra Ocular Pressure-A Retrospective study of 668 eyes of normal adults in a private practice. Pak J Ophthalmol 2004; 20: 23-5.
13.Gordon MO, Beiser JA, Brandt JD, Hever DK, Higginbotham EJ, et al. The ocular hypertension treatment study: Baseline factors that predict the onset of primary open-angle glaucoma 2002; 126: 714-20.
14.Aghaian E, Choe JE, Lin S, Stamper RL, et al. Central corneal thickness of Caucasians, Chinese, Hispanics, Filipinos, African Americans, and Japanese in a glaucoma clinic. Ophthalmology 2004; 111: 2211-9.
15.Thomas R, Korah S, Muliyil J. The role of central corneal thickness in the diagnosis of glaucoma. Indian J Ophthalmol 2000; 48: 107-11.
16.Colton T, Ederer F. The distribution of intraocular pressures in the general population. Surv Ophthalmol 1980; 25: 123-9.

The comparison of pulmonary functions in open versus laparoscopic cholecystectomy