High-riding innominate artery in the neck: A hazardous presentation during surgery

Aberrant innominate artery lying high in the neck is a rare entity that can be encountered intraoperatively during midline neck surgeries such as thyroidectomy and tracheostomy. Surgeons should be mindful of this entity as injury to the artery can lead to life-threatening haemorrhage. We report a case of a 40 year old female in whom an aberrant innominate artery was identified high in the neck, while performing a total thyroidectomy.

Head and neck surgeries of the anterior neck including tracheostomy, thyroidectomy, and mediastinoscopy report the least mortality rates; usually less than 1%. This is because in most circumstances, no major vessels are encountered when operating in the field of the trachea.1 However, in some cases, presence of a high riding innominate artery; a very unusual finding; has proven to further complicate surgeries by resulting in profuse bleeding and even death.1 Normally the brachiocephalic artery (BCA), the largest branch of the aortic arch, originates from the second costochondral junction, moves superiorly to the right, and terminates into the right common carotid artery and subclavian arteries behind the right sternoclavicular joint.2 This represents the normal trajectory of the artery in almost 70-74% of the population.3

Published literature has documented an abnormal innominate artery reaching the second, third, fourth, and fifth tracheal rings.4 In a case presented by Upadyaya et al, the innominate artery was observed to cross the trachea horizontally between the first tracheal ring and cricoid cartilage.2 The course of the brachiocephalic trunk and it’s anatomical variations hold immense clinical significance, as they contribute to major risk factors like haemorrhage when performing tracheostomy or total thyroidectomy as performed in this case.5 In the presented case, an aberrant innominate artery was found at the level of the third and fourth tracheal ring. It was incidentally detected during total thyroidectomy in a 40-year-old female patient.

A 40-year-old female presented to the outpatient department of Ziauddin Hospital, Karachi, in March 2022 with a complaint of a midline neck swelling for the past 6 years. The swelling gradually increased in size over the last 1 year. The mass was insidious in onset and gradually progressive. It was associated with progressive dysphagia and dyspnoea on lying down for the past 3 months. On examination, there was a large midline neck swelling, suspected as a diffuse goitre.

Total thyroidectomy was performed and the thyroid gland was safely removed without any intraoperative complications. Bilateral recurrent laryngeal nerves along with superior and inferior parathyroid glands were identified and salvaged. During the surgery, when the thyroid gland was released inferiorly, a large artery was encountered over the third and fourth tracheal ring, which was pulsating and was identified as an aberrant innominate artery (Figure). Usually, the innominate artery is located much lower in the mediastinum, hence this was an unusual finding. Care was taken while operating in this region in order to not damage this important structure. 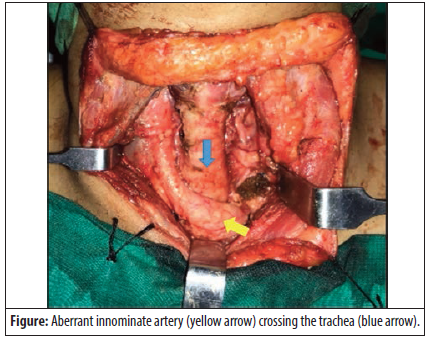 Post-operatively, the patient remained stable and no complications were seen. Post-operative calcium monitoring was done, which remained within normal limits. The patient was discharged on 2nd post-operative day in stable condition.

Aorta comprises of three divisions namely ascending aorta, arch of aorta, and thoracic aorta; out of which only the arch of aorta is situated in the superior mediastinum. Ascending aorta originates from the left ventricle and travels upwards to the level of the second right costal cartilage, where it enters the superior mediastinum and is now called the arch of the aorta. The first branch given off by the arch of the aorta, at the level of manubrium, is called the brachiocephalic trunk (BCT). It is the largest of all three branches. Behind the sternoclavicular joint, it divides into the right common carotid artery and the right subclavian artery, after ascending on the right side of the trachea.6,7 About 70% of the individuals are found with this normal classical anatomy. However, the published literature reports three studies of inadvertent intra-operative discovery of innominate artery high up in the neck.8

Although preoperative CT or MRI are not recommended as essential imaging routinely, they may provide additional information about aberrant neck structures in some circumstances like innominate artery.9 Abnormal high neck vessels may go undetected, preoperatively. Several complications may arise if anatomical variations are not recognized prior to surgery. Existing literature reports several anatomical variants of the brachiocephalic trunk, which include anomalies in length, bifurcation points, configuration, and size. Sometimes, a visible pulsation may be noticed which can help suspect vascular anomalies.9 CT angiography, MR angiogram of the neck and upper chest, and ultrasonography can help surgeons identify vascular anomalies in order to manage the patient effectively.7

Anatomical defects of the BCT can be quite vital during head and neck surgeries, as even a little unintentional lesion to these vessels can create sudden catastrophic bleeding; hence surgeons must have a thorough understanding of anatomical differences of the major vessels of the neck, in order to operate safely under unusual circumstances.10

Our case report also reports the unique presentation of the innominate artery, high up in the neck, at the level of the third and fourth tracheal ring. It was an intraoperative incidental finding during a total thyroidectomy as the pulsations in the region of the neck rose suspicion. The operating team and the surgeons took special precautions and care during the operation to not damage the innominate artery and avoid severe complications. We report this case as there is scarce literature regarding the presence of BCA artery high up in the neck. A good and in-depth understanding of an aberrant innominate artery is an indispensable asset for otolaryngologists and head and neck surgeons, as they are likely to face similar cases; allowing them to manage patients in case of any complications in time-pressured emergencies.

We report a case of a 40 year old lady who underwent total thyroidectomy, in whose case an aberrant high riding innominate artery was encountered intraoperatively. It is a rare entity that surgeons should be aware of while performing midline neck surgeries such as thyroidectomy and tracheostomy. Careful dissection during the surgery helps to avoid catastrophic complications.

Disclaimer: The patient’s consent was acquired for publishing this case report.

Conflict of Interest: None .

The causes and complexities of induced abortion in Pakistan