Subependymal giant cell astrocytomas (SEGA) are benign cranial tumours typically found in patients with tuberous sclerosis complex (TSC). Surgical resection has been the standard treatment for SEGA, however, medical management through mTOR inhibitors has now predominantly replaced surgery as the primary treatment modality. Additionally, newer treatment modalities have emerged with the hopes of providing safer methods for treating the tumour such as laser interstitial thermal therapy (LITT). However, very few reports have addressed these newer methods and analysed the results.

Subependymal giant cell astrocytoma (SEGA) are benign, typically slow growing cranial tumours characteristically found in patients with tuberous sclerosis complex (TSC). SEGA can either be unilateral or bilateral and are commonly found near the ventricles, particularly near the foramen of Monro, and can therefore cause obstructive hydrocephalus.1 Surgical resection has been the standard treatment for SEGA, particularly for patients presenting with acute deterioration due to hydrocephalus.2 However, mTOR inhibitors are now replacing surgery as the primary treatment modality for SEGA. mTOR inhibitors can improve multiple disease characteristics in TSC patients, with generally mild and easily manageable potential side effects.3 Alternative treatment modalities such as stereotactic radiosurgery and laser interstitial thermal therapy (LITT) have been recently proposed as viable options although at present there is limited data demonstrating promising results.4,5

Giordano et al., report that the most common indications for surgical resection are tumour growth, raised intra cranial pressure (ICP) and tumours at high risk of causing hydrocephalus given their size. The study further goes on to report that the efficacy in long term tumour control of gross total removal (GTR) of SEGA was 90% while being associated with a morbidity rate of 6.7%. Their data suggested that subtotal removal (STR) had a high chance (35.4%) of recurrence. Within the microsurgical routes, Giordano et al., report that the interhemispheric transcallosal route remains more common than transcortical-transventricular approach. Analysis showed that the transcallosal route had a higher success rate, allowing for a more complete resection (95% of cases, p = 0.019). The transcortical-transventricular route is more commonly suggested in the presence of enlarged ventricles and in the cases of larger tumours. In order to reduce surgical morbidity when symptomatic hydrocephalus is present, endoscopic procedures and/or CSF diversion is recommended.6 Despite initial reports of high surgical morbidity and mortality, Kotulska et al., reported that surgery for SEGA is relatively safe and effective in patients with tumours less than 2 cm in size. However, in cases where the tumour was larger, significant surgical morbidity was observed. The probability of a complication exceeded 67% when the tumour was found to be larger than  3 cm, and further increased to 73% when the tumour was larger than 4 cm. Surgery for bilateral SEGA, irrespective of their size, had a complication probability of 67%.7

Various medications have been studied over time as an alternate to surgery for treating SEGA. Everolimus remains one of the most commonly studied drug. Multiple reports suggest it to be a safe alternative to surgery. Bakhtiary et al., studied a dose of 3mg/m2 in patients with TSC and reported a response rate of 28.5%. Twenty-one percent patients showed significant reduction in SEGA volumes, and the progression rate was also considerably low (7.1%) at follow up. Furthermore, facial angiofibromas decreased in size and roughness in 42.9% of the patients and the hypomelantonic macules regressed in size in 50% of the patients.8 Krueger et al., further confirmed the reduction in SEGA sizes after everolimus treatment with 75% of their patients experiencing a 30% or more reduction in the volume of the primary lesions at six months. The authors also reported a significant reduction in seizure frequency (median change−1 seizure; p=0.02). Resolution of hydrocephalus and parenchymal dysplasia was also reported after treatment.9 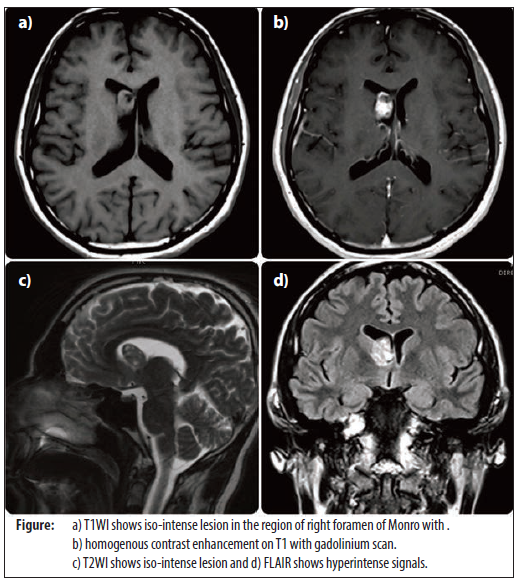 Franz et al., reported the impact of everolimus over a longer follow up and found that more than 60% of their patients that received the treatment for more than 5 years, exhibited a clinically relevant (>30%) reduction in their primary SEGA. They did not find any limiting toxicities with long term use and also reported no effects on patient growth and maturation characteristics.10

Dadey et al., reported their experience on treating SEGA with LITT in two cases and found that in both patients, LITT was not only tolerated well, but lead to tumour shrinkage and improvement in symptoms, suggesting the potential of LITT as a treatment of SEGA. One patient also reported reduced seizure frequency and an improvement in overall quality of life. To tackle the possibility of post-ablation tumour oedema, ventriculostomy was performed after the LITT procedure. The procedure allowed for a more effective management of transiently worsened hydrocephalus during the post-op period in one of the two patients.12

Desai et al., also reported their experience with three patients treated with LITT. The study observed a mean tumour volume reduction of 70± 27% in all three patients with no complications.  In these cases, a concurrent septostomy was performed to obviate the development of hydrocephalus in the situation that the tumour swells post-ablation and occludes the foramen of Monro. Another option that is recommended is a concurrent external ventricular drain placement for temporary CSF diversion. Although there aren’t enough studies to evaluate the overall treatment efficacy of LITT, these early reports are certainly encouraging.13

Medical management is continuing to replace surgical resection as the primary treatment modality for SEGA. Additionally, alternative treatment modalities such as LITT have recently been studied with encouraging results. However, larger studies are required to further evaluate their advantage over the currently preferred medical and surgical treatment modalities.