The journey from viral hepatitis to hypocythemia: Two case reports

A rare entity, Hepatitis-associated aplastic anaemia (HAAA) can be encountered from a week until a year after suffering from acute hepatitis. Hepatitis can be mild, severe, or fulminant requiring an urgent liver transplant. Aplastic anaemia in this instance is irrespective of the liver injury, more commonly affecting children and young men. Bone marrow suppression occurs mostly during the healing phase from acute transaminitis. Patients with such entities are then prone to develop neutropenic sepsis which leads to mortality without a bone marrow transplant.1

Association of HAAA has been observed with Hepatitis A, B, C, E, and G viruses. Other viruses, including Parvovirus B19, Cytomegalovirus (CMV), Epstein-Barr Virus (EBV), and Human Herpesvirus 6 (HHV-6), have also been reported as the causative agents for aplastic anaemia due to acute hepatitis.2

Physicians across the globe have reported drug- or supplements-induced hepatitis leading to aplastic anaemia in young adults. Dietary supplements have caused cardiac complications including palpitations and arrhythmias along with fulminant hepatic failure and aplastic anaemia which are most likely due to unknown active components added to these supplements.3

The case was reviewed in the departmental meeting and approved for submission after the approval and clearance by the department head.

A 23-year-old female, resident of sub-urban Islamabad with no known previous co-morbidity presented in the emergency & accident department of Pakistan Institute of Medical Sciences, Islamabad, Pakistan, on April 20, 2021, with a history of low-grade undocumented fever, occasional vomiting along with progressively worsening yellowish discolouration of sclera and skin for the last one week. She was noted to have diffuse jaundice, hepatomegaly, and mild right hypochondriac tenderness. No clinical stigmata of advanced liver disease were identified on physical examination. Liver function tests (LFTs) showed raised total bilirubin of 7.2mg/dl (normal 0.3-1.2 mg/dl), Alanine transaminase (ALT) of 880 U/L (normal 4-42 U/L)  and Aspartate transaminase (AST) 365 U/L (normal  8 to 33 U/L) while Haematology, Serum Electrolytes (S/E), and Renal Function tests (RFTs) were within the acceptable range (Table 1). The patient’s viral serology was sent which included Hepatitis A, B, C, and E. Subsequently Hepatitis “A” IgM came out to be positive, consistent with the signs and symptoms. At that time, she was managed on the lines of acute viral hepatitis with intravenous fluids including 5% Dextrose water, Lansoprazole infusion 40mg once daily, Dimenhydrinate injection as needed, and antipyretics as needed. Once transaminitis resolved and her condition stabilised she was discharged on home treatment and advised to have an outpatient follow-up.

On May 12, 2021, she again presented to the E&A Department with the complaint of gum bleed and fever for the last two days. Blood investigations were carried out and her complete blood count showed pancytopenia with a platelet count of 3000/uL (normal 150000– 400000/uL), Haemoglobin (Hb) of 7.4g/dl (normal 13.5-18 g/dL) and Absolute Neutrophil Count (ANC) of 387 (normal > 2000). Her LFTs, RFTs and S/E were unremarkable (Table 1). An extensive haematological workup was performed to look for the cause of pancytopenia. Peripheral blood smear revealed severe neutropenia and normocytic normochromic anaemia along with severe thrombocytopenia although no abnormal or blast cells were present. Serum ferritin, iron, total iron-binding capacity (TIBC), B12, and folate levels were also optimal. Direct Coombs test was negative and thus she underwent bone marrow aspiration and flow cytometry analysis which showed severe hypocellular bone marrow (less than 5%) with dyserythropoiesis. The cytogenetic study showed a normal karyotype. Immunostaining with CD3 and PAX5 stains were inconclusive. Additionally, anti-CD 55/59, mitomycin-C, and Fluorescence in situ hybridization (FISH) studies also did not reveal promising results to point towards the cause of pancytopenia. The patient and next of kin did not give the history of use of non-allopathic/hakeemi medications shortly. 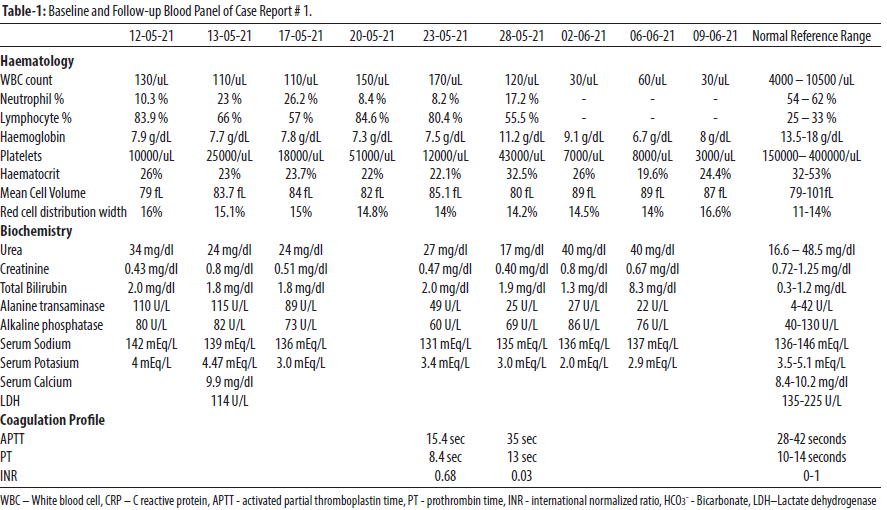 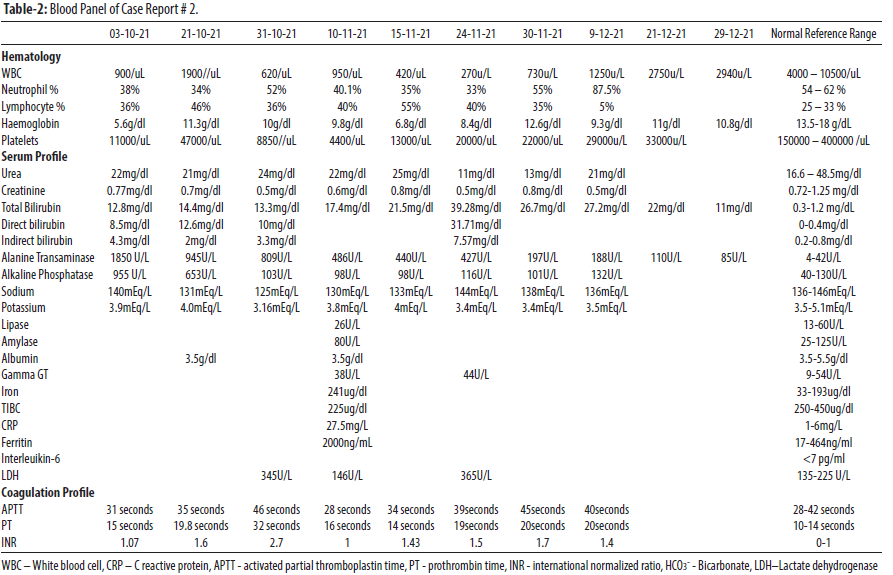 Given the patient’s age, gender, and her initial presentation with acute viral hepatitis, the diagnosis of Hepatitis-associated aplastic anaemia (HAAA) was reached. Meanwhile, she was managed with Tazobactam+ Piperacillin 4.5 gm, Recombinant Granulocyte-Colony Stimulating Factor (G-CSF) 300 microgram once a day, Methylprednisolone 60mg once daily, antipyretics, proton pump inhibitors and packed red cell transfusions along with platelets transfusion to cope with the blood dyscrasias.

During her stay in the hospital, she developed progressive right-sided orbital swelling and proptosis for which magnetic resonance imaging (MRI) of the orbit was done which showed marked soft tissue enhancement in the right periorbital region, thickened right optic nerve compared to the left side, marked mucosal thickening in sphenoid sinuses extending laterally to cavernous sinuses bilaterally with encasement of bilateral internal carotid artery similar to mucosal thickening, also seen in the right maxillary and right ethmoidal sinuses, overall the findings were suggestive of a fungal infection. The oto-rhino-laryngology team managed to take a sample via Functional Endoscopy which was sent for fungal culture. Keeping high suspicion of mucormycosis in view, Intravenous Amphotericin was added to the regimen. At this point, the patient was shifted to the medical intensive care unit and the family was counselled regarding her prognosis. Despite all interventions and possible medical management, the patient was unable to cope with the disease process and superadded infection due to an immunocompromised state which led to her sad demise on May 25, 2021. Informed consent was obtained from the patient’s father for her anonymised information to be published in this case series.

The case was reviewed in the departmental meeting and was approved for submission after approval and clearance by the department head.

A 16-year-old male, student of  grade 10, resident of Afghanistan with no previous known co-morbidity presented at the Outpatient Department of Pakistan Institute of Medical Sciences (PIMS), Islamabad on November 17, 2021 with complaints of yellowish skin and discolouration for two months, low-grade undocumented fever for one month associated with weight loss of 7kg despite normal appetite. The patient was previously admitted in Afghanistan on October 3, 2021 where he was revealed to have pancytopenia on blood count. Liver function tests showed serum total bilirubin of 12.8 mg/dl (normal 0.3-1.2 mg/dl)  with a direct bilirubin of 8.5 mg/dl, ALT of 1850 u/l (normal 4-42 U/L) AST 695u/l (normal  8 to 33 U/L), and ALP 953u/L (normal 40-130 U/L). Hepatitis A, B, C Serology was negative. He was treated there symptomatically for 25 days, and then on October 29, 2021 was taken to Hayatabad Medical Complex (HMC) Peshawar, Pakistan. There he had three episodes of haematuria along with two episodes of epistaxis. Labs showed consistent pancytopenia with progressive decline in ALT & ALP but there was an increasing trend in both direct and indirect bilirubin, while the coagulation profile was mildly deranged. Dengue (NS1 & NS2) and Hep E (IgG) came positive on Novenber 8, 2021 in investigations carried out at HMC Hospital Peshawar.

The patient remained admitted there for 10 - 12 days and then was brought to PAEC General Hospital, Islamabad, where he had a bone marrow biopsy which showed hypocellular bone marrow suggestive of aplastic anaemia. The patient was then referred to PIMS for further management. On admission, the patient was jaundiced with low-grade fever but no active bleeding. The patient and next of kin did not give any history of use of non-allopathic/hakeemi medications shortly.

On examination, there was jaundice, pallor, and coated tongue with an ulcer on the base of the right side. He had petechiae on the front and back of the chest. No hepato-splenomegaly or palpable lymphadenopathy was present. GCS was 15/15, his vital signs were BP=100/70, HR= 91bmp, RR=16/min, Temp=99.6oF. CBC showed severe pancytopenia with absolute neutrophil count (ANC) of 141, platelets of 7,000 (normal 150000– 400000/uL) and Hb of 7.5 g/dl (normal 13.5-18 g/dL). Bilirubin was raised to 39 u/l (normal 0.3-1.2 mg/dl) with direct hyperbilirubinaemia of 31u/l, ALT 553u/l (normal 4-42 U/L), and ALP 108 u/l (normal 40-130 U/L) with normal serum electrolytes, RFTs and coagulation profile. HIV serology was negative. The peripheral film showed pancytopenia with no abnormal or blasts cells, Retic Count of 0.3% (normal 0.5% to 2.5%). , and LDH of 358u/l (normal 135-225 U/L). Urine routine examination showed +3 bilirubin. Serum iron, TIBC, vitamin B12, folate was in a normal range. Direct Coomb’s test was negative, with a normal ceruloplasmin level. Paroxysmal Nocturnal Haemoglobinuria, Fanconi Anaemia, and Black Fan Diamond Syndrome were ruled out. His sonogram of the abdomen showed mild abdomino-pelvic ascites, gall bladder sludge and pericholecystic fluid. CT Scan of the chest, abdomen, and pelvis with contrast was also unremarkable with no biliary tract pathology. Treatment was carried out on the lines of viral hepatitis and febrile neutropenia with Inj Tazobactam/Piperacillin 4.5 gm, Infusion 5% Dextrose, Syrup Lactulose, Proton Pump Inhibitors, antiemetics and antipyretics as needed along with transfusion of Packed Red Cell Concentrate (PRCC) and Platelets. The patient was given Granulocyte-Colony stimulating factor (Filgrastim) and Prednisolone

Acquired aplastic anaemia (AA) is described by a hypoplastic, fatty bone marrow with overwhelming reductions in haematopoietic stem/progenitor cells (HSCs/HPCs) that lead to malfunctioning mature blood cell production and peripheral pancytopenia. For diagnostic purposes, per definition, AA requires at least two of the following criteria: Haemoglobin <10 mg/dl, platelets <50,000 mg/dl & neutrophils <1500 mg/dl, with a hypocellular marrow and in the deficiency of abnormal infiltrates or fibrosis. Currently, aplastic anaemia is defined by reduced cells of bone marrow HSCs and HPCs resulting in a hypo- or aplastic marrow with precocious fat replacement.4

Prevalence of reactive Hepatitis E IgG in the paediatric population is 14–26% whereas among the adult population it is 20 – 22%.5 Hepatitis E acute infection can recover in one to five weeks whereas chronic viraemia can persist for more than  six months.6 Hepatitis-associated aplastic anaemia/pancytopenia can occur two to three months after acute viral attack.7  IgM anti-HEV has been revealed in the serum by EIA in more than 90% of patients, serology may be negative in a significant fraction of people with acute infection. In a series of 44 children with acute HEV, 35% tested positive for IgM anti-HEV and 3% positive for IgG anti-HEV. In another description, the sensitivity and specificity for IgM anti-HEV were 27% and 92%, respectively.8

The IgG response appears shortly after the IgM response, and its titer boosts during the acute phase into the convalescent phase. It is ambiguous with a duration till the IgG anti-HEV antibodies can `endure.8

In aplastic anaemia, cytotoxic T lymphocytes (CLs) play a major role in bone marrow destruction. Lymphocyte expansion is strongly related to the severity of HAAA. Children with non-viral hepatitis are reported with aplastic anaemia despite liver transplant, which indicates continuity of the underlying pathogenesis though the insulting source has been treated.2

Clinical manifestations due to HAAA include pancytopenia, anaemia, thrombocytopenia-induced epistaxis, gum bleeding, and neutropenia leading to infections. Intracranial bleeding is the most fatal complication, though it is very rare.2 Such patients are vulnerable to bacterial or invasive fungal infections which are common causes of death.3

These patients are treated with supportive therapy and definitive therapy for aplastic anaemia. Treatment options include bone marrow transplantation (BMT) and immunosuppressive therapy. Since these patients have a high susceptibility to bacterial and fungal infections, therapy will include prophylactic antibiotics and, if needed, anti-fungals. Haematopoietic stem cell transplant is preferred over immune suppressive therapy if an HLA-matched bone marrow donor is available. Patients who are cured with immunosuppressive therapy are at increased risk of acute leukaemia or myelodysplastic syndrome (MDS) in later life and need lifelong surveillance.3

Acknowledgement: We are thankful to Assistant Prof. Fibhaa Syed for her expert opinion and critical review of the manuscript.