Use of Escitalopram for pseudobulbar affect following severe traumatic

Those who have suffered from traumatic brain injury (TBI) often develop behavioural, affective, and cognitive complications. Some might experience episodes of involuntary and/or exaggerated laughter and crying. This condition is commonly known as ‘pseudobulbar affect’(PBA) and leads to anger, frustration, and social disability. This case report presents the use of low-dose Escitalopram in an individual suffering from agitation and PBA following severe TBI (sTBI). It emphasises the importance of adopting a holistic approach in the treatment of such individuals with appropriate attention paid to factors such as cognitive and behavioural impairment, and caregiver distress.

Traumatic brain injury (TBI) is one of the most common causes of death and disability across the world.1 It often results in cognitive and behavioural impairment which hinders recovery and rehabilitation. Behavioural disturbances that may arise after TBI include agitation, aggression, irritability, and affect lability.2 Pseudobulbar affect (PBA) is an under-recognised—and often misdiagnosed—complication of TBI. It is characterised by episodes of uncontrollable laughter and/or crying that are exaggerated or at odds with a person’s subjective state.3 It is imperative to reliably recognise and effectively treat PBA as these episodes cause embarrassment and frustration. They impair the quality of life and increase caregiver burden.4 This case study explores the use of Escitalopram in a patient with severe neurocognitive disorder, following TBI, who exhibited disruptive behavioural symptoms and was diagnosed as suffering from PBA. In our patient, agitation posed significant practical problems in care-taking.

A 50-year-old man was brought to the outpatient department of the Benazir Bhutto Hospital, Rawalpindi, in January 2021, with complaints of forgetfulness, agitation, and aggression. He had suffered a road traffic accident two years and one month ago, sustaining polytrauma with TBI. He went into a coma with Glasgow Coma Scale (GCS) 6/15 and subsequently underwent craniotomy and cerebral decompression. He was extubated four months later. He was discharged from the hospital 11 months after the accident, and had been living with his family for the past 14 months. He suffered from memory loss and had difficulty in recognising people. He was dependant on his caregivers for basic tasks. There was a history of agitation and unprovoked physical and verbal aggression. The patient would frequently become upset at those taking care of him. He showed stubbornness and resisted help, often lashing out at others and hitting his head against the wall. Additionally, there were frequent instances of inappropriate laughter and crying. He would laugh randomly or at inappropriate stimuli, such as at the sound of a ball hitting the wall, utensils falling on the ground, or on seeing someone trip. There were frequent instances of tearfulness when the patient was unable to say why he is tearful. The patient was not taking any medication except, occasionally, painkillers.

The patient was admitted for further evaluation. On mental state examination, psychomotor retardation was observed. Inappropriate laughter was noted multiple times during the interviews, randomly or over incongruent and often trivial stimuli, for example, in response to a question about his place of birth or when he was handed a pen to write with. The patient exhibited tearfulness a few times, but he denied crying or feeling sad when asked. Affective instability was also observed. Long-term, short-term, and working memory were noted to be impaired. On mini-mental state examination (MMSE), the patient scored 13/30 signifying severe cognitive impairment (a score less than 17 indicates severe cognitive impairment). The patient was prescribed 5 mg Escitalopram once daily (OD). The agitation/aggression subscale of the neuropsychiatric inventory (NPI) was used to measure behavioural changes.5 It was administered before the commencement of the treatment, and one week, and one month after the start of treatment. The detailed breakdown of the responses can be seen in Table 1. The improvement was observed in a few days after the start of the treatment. The aggression became selective and was directed mostly towards children or sources of disturbance. Most notably, the caregiver stress associated with these symptoms disappeared. 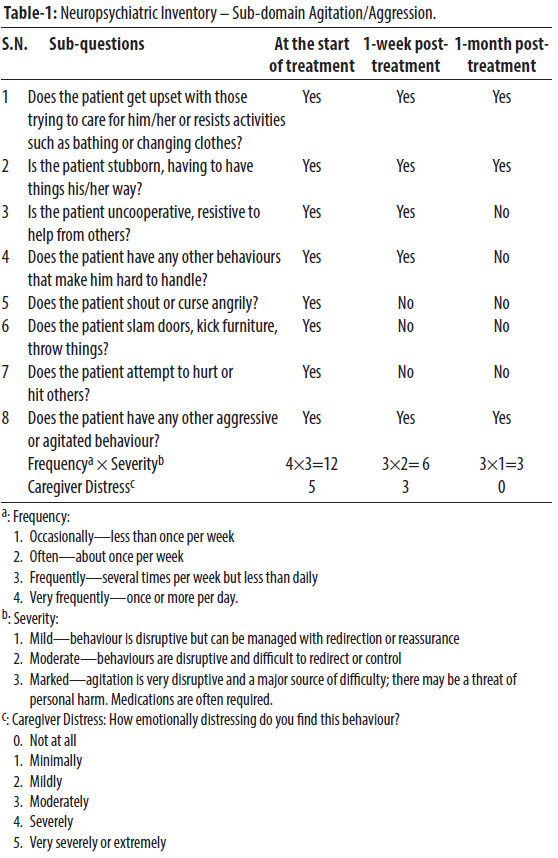 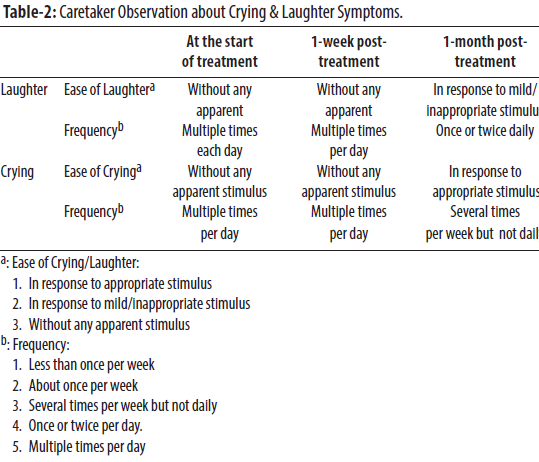 Informed consent was obtained from the caregiver of the patient for publishing this case report.

TBI is slated to become the most common cause of death and disability in the developing world by 2030.1 The role of cognitive, behavioural, and emotional impairment in impacting the process of rehabilitation post-TBI is increasingly being recognised. A study measuring cognitive impairment and its impact on the outcome following sTBI observed that poor cognitive performance at three months led to worse outcomes and was also linked to an increased presence of anxiety and depression.6

Different terms, such as ‘neurobehavioural changes’ and ‘neuropsychiatric symptoms’ have been used to describe post-TBI behavioural disturbances. It is also difficult to separate primary behavioural changes from those that result from emerging psychiatric disorders.2 There is a need for clearer terminology to describe disruptive behaviours. Stefan et al proposed classifying them into two categories: ‘disruptive primary behaviours by excess’ (agitation, aggression, irritability, substance abuse, felony, and crime) and ‘disruptive primary behaviours by default’ (apathy, decreased initiative, isolation, and withdrawal). The latter is more common following TBI than the former.2 Of these behaviours, our patient exhibited agitation and aggression. Agitation is most common in the initial period after injury but its persistence is linked to poorer outcomes. Such behaviour, as in the case of our patient, makes caregiving stressful and difficult. It leads to worse quality of care, poor quality of life, and increased burden on caregivers. Appropriate assessment and management are essential. Treatment involves psychological, environmental, and behavioural dimensions.2 Agitation/Aggression subdomain of Neuropsychiatric Inventory (NPI) was used to assess the severity and changes in the behaviour of our patient. NPI is a validated instrument and has been used to evaluate behaviour in various neurological disorders; it also measures caregiver distress associated with each symptom.5

Episodes of uncontrolled laughter and crying are embarrassing and lead to social withdrawal and isolation. Given this, PBA must be reliably recognised and effectively managed.

Due to various reasons, PBA is under-recognised and often misdiagnosed.7-9 For one, different and overlapping terms, such as emotional incontinence, affect dysregulation, affective lability, and more recently, involuntary emotional expression disorder (IEED), have been used to describe this condition.7 Some authors prefer the term ‘pathological laughter and crying’.10 An additional challenge in patients with TBI is differentiating symptoms of PBA from psychiatric diagnoses such as depression, mania, or post-traumatic stress disorder.8 Finally, this process becomes more challenging in patients with severe cognitive impairment who are not able to fully communicate.

It is hoped that increased awareness of this disorder might lead to a better diagnosis. Selective serotonin reuptake inhibitors (SSRI), tricyclic antidepressants (TCAs), and Dextromethorphan/Quinidine (DM/Q) have proven effective in the management of PBA, including PBA following TBI.3,7 While selecting the agent to use for patients with TBI, the cost, side-effect profile, and presence of comorbidities should be kept in mind, particularly as such patients often require long-term care. Another aspect to be kept in mind is the prohibitive cost and non-availability of DM/Q in developing countries.

The outcomes measured in this study were: First, agitation/aggression using NPI. Second, the distress of caregivers. And third, symptoms of PBA using caregiver’s response. Agitation/aggression improved earliest. Improvement in PBA symptoms was not uniform, with improvement in laughter symptoms observed before improvement in crying symptoms, and full remission was not achieved. Dramatic improvement was seen in caregiver burden. As symptoms were stable in the months before therapy, this improvement cannot be attributed to natural recovery. The medicine was well tolerated and no adverse effects were reported. We recommend a holistic approach in dealing with patients with post-TBI PBA, which keeps in mind the behavioural and cognitive domains and pays heed to the caregiver burden associated with the condition.

Acknowledgement: We are grateful to the caregivers of the patient for their consent to publish the case report.

Disclaimer: This case report was presented as conference abstract at the ‘First Neuroscience for Wales Virtual Conference, June 2021’, where it received a special commendation from the Royal College of Psychiatry.

Conflict of interest: The person who signed the letter of approval for the case report is a co-author of this manuscript.