Xanthogranulomas are the most common form of non-Langerhans cell histiocytosis. They are benign, asymptomatic, and self-healing, affecting mostly infants, children, and very rarely adults. They present clinically as erythematous to yellow-brown papules. In children they can be single to multiple but in adults they are solitary.  We present the case of a 23-year-old Pakistani man with an erythematous to yellow-brown papule on his neck that persisted for 1.5 years. The results of an excision biopsy showed histopathological features of histiocytes, tuoton giant cells and necrobiosis corresponding to xanthogranuloma. We emphasize the importance of considering xanthogranuloma in skin coloured nodules.

The pathogenesis of XG is unknown. Although aetiology has been linked to various physical and infectious factors, most investigators believe that it is caused by a reactive response to an unknown stimulus.4 In both the juvenile and adult variants of xanthogranuloma, patients present with cutaneous, discrete, well-demarcated, reddish to yellow, dome-shaped papules and nodules that often are asymptomatic.5 Rarely systemic involvement can occur with deep soft tissues being the most common site involved followed by liver, spleen, lungs and central nervous system. Due to self-healing nature of the cutaneous XG, systemic treatment is controversial. However spontaneous regression is not common in adult xanthogranuloma. Treatment options for solitary lesions include surgical excision, retinoids and carbon dioxide laser. It is a benign condition with a good prognosis and is not typically invasive.3

We present a case of JXG in a 23 year old male, being very rare in adults.The importance of considering XG in differential diagnosis of erythematous to skin coloured papules/nodules is emphasised.

A 23-year-old Pakistani man presented on 21st April, 2021 at PNS Shifa Hospital Karachi, with an asymptomatic, gradually enlarging papule on his neck, as seen in Figure 1. The papule had persisted for 1.5 years. He had no other skin lesion. He gave no history of headache, seizures or photophobia. On physical examination, the patient had a solitary, well-demarcated, reddish, dome-shaped, and flat-topped, 0.5- to 1-cm papule on front of his neck with surface telangiectasia. Scaliness and central depression were absent. The lesion was firm in consistency, and no other similar lesion was found elsewhere. Rest of the cutaneous examination was unremarkable. Ocular examination by ophthalmologist was unremarkable. 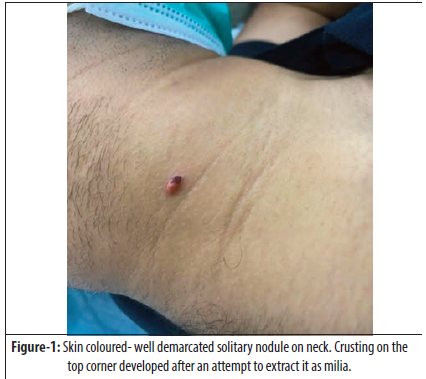 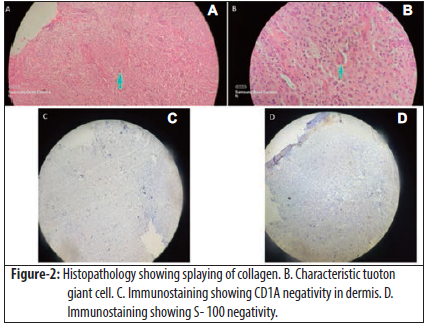 The papule was excised completely under local anaesthesia of 0.1% lignocaine with adrenaline using strict aseptic measures. The wound was closed with silk 3-0. The patient was counselled regarding the benign nature of the lesion. Stiches were removed after 1 week.

In our case there was a single papulonodular lesion in front of the neck in accordance with majority of the cases in literature. However there have been cases of multiple cutaneous lesions as reported by Tian et all.6

Furthermore literature review has shown that histopathology has been highly useful to confirm the diagnosis. The common finding observed have been Tuoton giant cell and histiocytes with lipid laden macrophages.8 These findings may be absent in early stages of the disease, making the diagnosis difficult. In our case, histopathology showed similar changes.

Vahabi-Amlashi et al reported little improvement with systemic retinoids9 in purely cutaneous lesions. In our patient there was no systemic involvement so there was no rationale for systemic treatment. Complete surgical excision was done for diagnostic, therapeutic and aesthetic purpose.

Although recurrence has been documented in studies after excision, our patient had no recurrence until 6 months of follow-up.

This was a rare case of adult-onset xanthogranuloma that shows that this diagnosis should be considered when dealing with skin coloured nodules in adults.

Informed Consent: We have not disclosed patient’s identity or personal information. Permission was taken before including his picture in the article.