The gastrointestinal basidiobolomycosis, a rare entity: Case report and review of literature

Basidiobolomycosis is a rare disease caused by the fungus Basidiobolusranarum, a member of the class  Zygomycetes.1-4 Usually basidiobolomycosis is a subcutaneous infection but rarely gastrointestinal manifestations have been described with right colon as the most frequently involved site.3,5 It usually presents with abdominal pain or mass in the abdomen.

A 34-year-old male first presented to the emergency department of Shifa International Hospital, Islamabad, on January 25,2020, with complaint of abdominal pain for two weeks. The patient was a known case of diabetes mellitus for nine years and was working in Saudi Arabia for a few years. CT scan showed significantly inflamed and enlarged appendix near its base with a thick-walled loculated fluid collection in the right iliac fossa (Figure 1,2). Surrounding fat with mesenteric stranding and prominent subcentimeterparacaecal lymph nodes were seen. Provisional diagnosis of perforated appendix was made and appendectomy was performed. Appendix showed acute appendicitis with peri appendicitis and abscess formation on histopathology. Special stains Periodic Acid Schiff (PAS) and GomoriMethamine Silver (GMS) highlighted scattered well-formed structures in the necrotic slough. The possibility of a fungal infestation was raised and correlation with clinical and culture findings was suggested. The patient was discharged from hospital within a week. After one month he developed abdominal pain and constipation. He was admitted to another hospital and exploratory laparotomy was done for a mesenteric mass. A caseous lesion was noted preoperatively and probable diagnosis of intestinal tuberculosis was made. The patient was given Antituberculous therapy (ATT)on this basis. After 10 days on 7th March,2020 the patient presented to our hospital again with surgical site infection. Re-exploration was done and omentum was sent for histopathology. The sections of omentum revealed large areas of fat necrosis with infiltration by a fungus having thin-walled broad septate hyphae showing Splendore-Hoeppli phenomenon. They were surrounded by an inflammatory infiltrate, rich in eosinophils, along with neutrophils and histiocytes (Figure 3). Many abscess-like areas were also seen. The fungal hyphae were highlighted on special stains, Periodic Acid Schiff (PAS) and GomoriMethamine Silver (GMS) (Figure 4). These morphological features were consistent with gastrointestinal basidiobolomycosis. 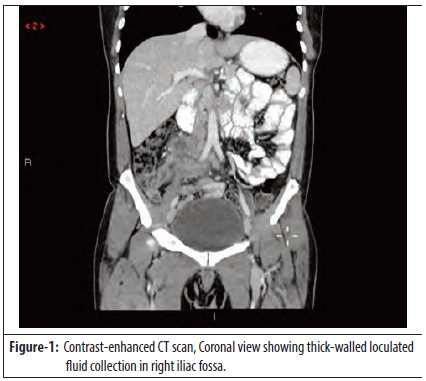 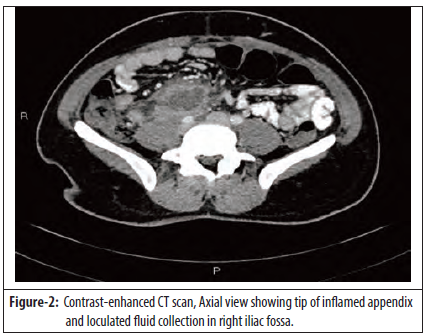 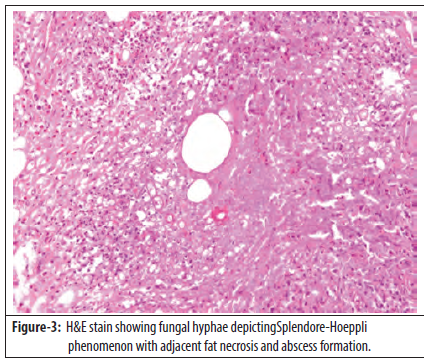 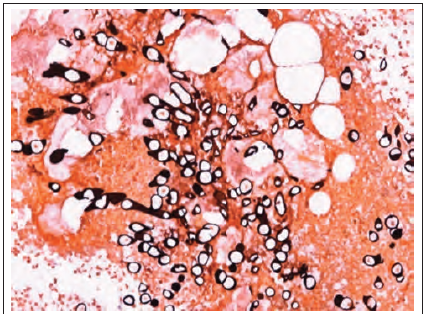 Amphotericin was given to the patient to combat fungal infection but within two weeks the patient developed multi-organ failure. He was shifted to the intensive care unit (ICU) but, unfortunately, developed septic shock and died.

Gastrointestinal basidiobolomycosis is a rare fungal infection having broad symptomatology and mimics other much common clinical entities which make its diagnosis exceedingly difficult. Current data suggests that males maybe more susceptible with only six out of 71 reported cases being females.6 The risk of basidiobolomycosis is higher in individuals with uncontrolled diabetes mellitus, prolonged neutropenia, haematological malignancy, organ transplant, use of corticosteroids and antacids, smoking, acquired immunodeficiency syndrome (AIDS),malnutrition, burns, and trauma.6 A major risk factor of diabetes mellitus was present in our patient. Most of the reported cases are from tropical regions where the climate is warm and humid as such climate favours fungal growth.2,7 A review of the cases reported so far shows 28 cases from Saudi Arabia, 24 from USA, 17 from Iran, 2 from Kuwait, 6 from Iraq, 2 from Nigeria, 4 from Brazil, 1 case from India, and 1 case from Netherlands.2,6,7 In this case too, the patient had been living in Saudi Arabia for the last few years.

The mode of transmission is poorly understood but most likely it is by ingestion of contaminated food. The onset is usually insidious and the patient presents with abdominal pain and fever. Mostly an abdominal mass is detected on CT scan showing diffuse thickening of the colon wall.

If the fungus is scanty then there are chances of misdiagnosis. In this case, initially the specimen of appendix had scanty fungus so a definite diagnosis was not reached at; however, the possibility of fungal infestation was raised. Theomental tissue sent after re-exploration had characteristic morphology of Basidiobolomycosis.

Definitive diagnosis requires fungal culture but it is positive in only 15% to 25% of the cases.6 Many cases of basidiobolomycosis are reported without culture just on the basis of its characteristic morphology.4,7-9 PCR can be helpful when fungal culture is negative. Molecular diagnostic tests are more accurate as DNA can be isolated from paraffin embedded tissue.6

The treatment of choice is surgical resection of the affected tissue followed by long-term antifungal medication.8

Gastrointestinal basidiobolomycosis is a rare life threatening fungal infection. In our case the patient was initially operated on for perforated appendix and the suspicion of fungal infestation was raised. However, no conclusive diagnosis was made on the basis of only few fungal hyphae. After a month in another facility patient was misdiagnosed as a case of tuberculosis, a closely mimicking disease and ATT was started. By the time this rare fungus was accurately diagnosed, it had disseminated resulting into the death of patient within the time span of less than two months. A high index of suspicion is required to diagnose these cases and treat them in a timely manner. Like this patient a lot of people from Pakistan are working in Middle East so the tropical prevalence of this specific fungus should be kept in mind when patients present with such clinical features.

Limitation: Since the death of patient the only contact number provided in the hospital record is inaccessible so there is no possible way of taking relatives consent.