Morphological variations in malleus among the male and female

Method: The cross-sectional descriptive study was conducted at the Ear-Nose-Throat and Radiology departments of a public-sector hospital in Karachi, from January 20 to July 23, 2021, and comprised subjects of either gender aged 10-51 years who had intact ear ossicles. They were divided into equal male and female groups. After history and a thorough examination of the ear, high-resolution computed tomography scan of petrous temporal bone was done. The images were studied for malleus, to measure the parameters of its head width, length and shape of manubrium, and total length of malleus for possible morphological variations along gender lines. Data was analysed using SPSS 23.

Ear is a paired organ present separately on each side of the head with the receptor called cochlea. It gives two significant function of hearing and equilibrium which generally relies upon particular receptors that are hair cells.1 Ear is a sensitive structure internally which needs to be handled with great care in order to prevent any serious consequences. The conduction of sound inside the ear primarily begins when sound waves enter the canal and vibrate the eardrum.2 Ear ossicles, the miniature bones “malleus, incus and stapes” transfer these vibrations to oval window (a sheath accessing the inner ear).3 In human beings, referring to the auditory ossicles, some scientists concluded that it reaches an absolute dimension and form in foetal periods, and postnatal alterations are negligible, whereas there are certain studies that have opposed this claim.4 Auditory ossicles reach their adult size in foetus by 6 months of intrauterine life (IUL).5 The presence of adult sized ossicles in human foetuses of 5th month IUL were also reported and that their development is not fixed to rate of body growth in general.6 Conversely, a study reported that the development of auditory ossicles in humans is not completed during foetal life. There were morphological changes in the post-natal life in terms of shape and size, denoting the structural changes due to bone remodelling which does not stop afterwards mainly because of the osteocytes activity resulting in the changes in bone.7

A number of ear-related disorders are self-inflicted and are caused during trauma, washing, ablution and inserting an object into the ear canal for the purpose of cleaning which interferes with the natural cleaning mechanism of an individual’s ear. Ear ossicles, which are a part of ossicular chain, are important for proper sound conduction in ear. It is a challenge for an Ear-Nose-Throat (ENT) specialist to completely restore the functional integrity of this structure, and they need to have complete knowledge about the anatomy of ear ossicles.8

Studies have mentioned the morphological variations in these structures, but these changes were recorded in cadaveric studies.9

Ear is isolated into three sections; outside, centre and internal ear. The ear ossicles incorporate three little bones that are malleus, incus and stapes. In tympanic cavity, it frames a connection between the oval window medially and with tympanic membrane laterally.10

Most laterally in the cavity is present a hammer-like bone called malleus. It has 2 processes, anterior and lateral, a head, neck and handle which is also known as manubrium. Incus appears as anvil and has 2 processes, short and long, and a body.11 In incus at the tip of the long process, a small mass is present, known as lenticular process; the head of stapes articulates with it. Stapes is the shortest of all the bones in the body that seems like a little stirrup and comprises a little head on top, two crura, a base also called footplate, and a neck.12 Malleus articulating surface is in contact with incus body by a synovial joint. Stapes head articulates with the lenticular process and forms an ‘incudostapedial’ joint.13 The articulation of three bones in the centre part of the ear assists in proper sound conduction.14

The cross-sectional descriptive study was conducted at the ENT and Radiology departments of a public-sector hospital in Karachi, from January 20 to July 23, 2021. After approval from the ethics review committee of Bahria University Medical and Dental College, Karachi, the sample size was calculated using OpenEpi version 3.16

Patients who visited the ENT Department and were referred to the Radiology Department for investigation were considered for participation. Those included were subjects of either gender aged 10-51 years who had intact ear ossicles. Those with fractures involving ear, polytrauma patients, participants who underwent any form of surgery of the ear in the past related to ear ossicles, and with eroded ossicles were excluded. After taking informed written consent, a proper ear examination of each participant was done before they were selected for a computed tomography (CT) scan of petrous temporal bone (Aquilion-160 slice Toshiba Prime CT scanner). The individual was placed in a fully supine and still position on the 47cm wide couch. The couch was positioned to place the lens of the individual’s eyes as far as possible out of the pathway of the X-ray beam to minimise exposure to the lens. The bore of the CT scanner was 78cm in width. It produced images with a 0.5mm resolution and 40% better light outputs. With respect to goal, the thickness of each cut was 0.75mm with a 0.5mm increase for each cut, a 512×512 lattice, and a pixel size of 0.43mm. The showcase field-of-perspective on each cut was 22.0×22.0cm.17 Measurements of malleus were taken in the console room for CT with the help of a Vitrea 1.5.2265.3045 software, and all the changes observed in the morphology of malleus were recorded in three different planes; coronal, sagittal and axial. The study parameters were the width of the malleus head, length of manubrium, total length of malleus and the shape of manubrium (straight/curved) (Figure 1). 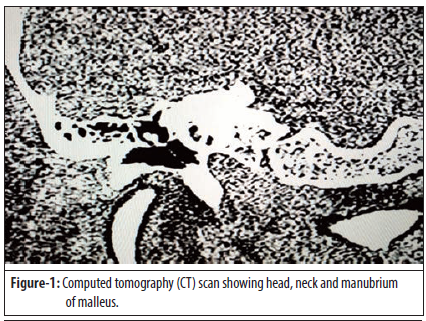 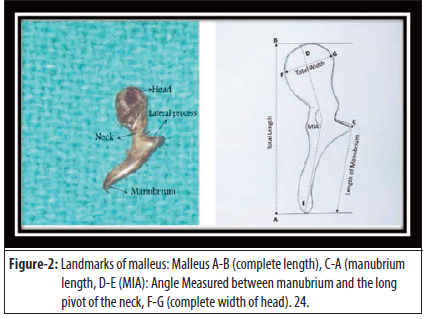 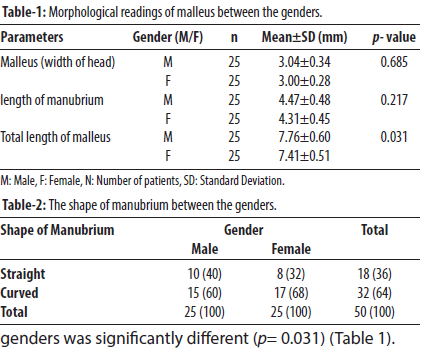 For advancement in reconstructive procedures, morphometric data can be beneficial. These small bones are advised to be radiologically assessed prior to surgeries. Some areas in these bones are at great risk of injuries with consequential intraoperative complications. Hence, the knowledge of anatomical variations of ear ossicles is crucial for ENT specialists as well as for radiologists for preoperative evaluation of these varieties to avoid iatrogenic complications after transplants, and to identify the difference between normal morphology and eroded ossicles due to trauma.19

High-resolution computed tomography (HRCT) scans are highly reliable in the identification of ossicular tympanosclerosis and all the diseases leading to erosion of ossicles. It is considered the gold standard radiological investigation for assessment of the middle ear cavity. Many anatomic modifications in petrous temporal region can be easily detected by CT scan.20

Variation in these bones have been noted previously mostly through cadaveric studies which is expensive and time-consuming related to the changes.21 A CT evaluation has been moderately done for diseases related to middle ear cavity, and it has been noted that this standard investigation is the fastest way to detect these changes by taking measurements in console CT rooms with the help of advanced software.22 The cause of these variations may be due to the amount of bony tissue located in that particular area of bone, extension and direction of changes in bone growth, remodelling process as different parts of ossicles shows different rates of growth in each individual.23

A significant change in malleus length was observed (p=0.014) in both male and female groups in the right ear, and similarly in Mhandle in both gender with significant difference in both right (p=0.02) and left (p=0.014) sides. The results of these two parameters were not consistent with previous studies, but they did show significant differences in both genders in the north Indian population. The total length of the right malleus and the length of the handle on both sides of the malleus are reasonably appropriate criteria to significantly test in sexual dimorphism, according to the analysis of the different malleus parameters.24

The variations seen in malleus were mainly due to the presence or absence of neck in malleus.25 Mhandle, also known as manubrium, showed variation in morphology in individuals in terms of shape, and malleus manubrium had straight and curved processes.26 In the current study, 36% participants had straight and 64% had curved manubrium.

The limitations of the current study include a small sample size and its single-centre orientation. All anatomical variations mentioned in literature were not included, and the study did not look for association of variations in ear ossicles with hearing thresholds due to restricted time period for study completion. The size of ear ossicles is very minute, and although multiple readings were taken with the help of a software and mean values were computed to decrease human error, there remains a chance of error. Inclusion criterion had selection bias and, therefore, the results are not generalisable.

There were morphological variations in ear ossicles in terms of size and shape in correlation with gender. The most frequent anatomical variation was seen in malleus manubrium, which had a difference in shape.

Acknowledgement: We are grateful to Ambreen Usmani, Sohail Aslam, Saneed Khaliq, Ayesha Mehwish and Rida Rubab Ahmed for assistance at various stages of the study.

Disclaimer: The text is based on an MPhil thesis.