Method: The retrospective study was conducted at Shaukat Khanum Memorial Cancer Hospital, Lahore, Pakistan, and comprised data from January 2019 to December 2020 of patients with normal lymph nodes on ultrasound, tumour stages T1, T2 or T3 having invasive cancer who underwent sentinel lymph node biopsy. Ultrasound findings were compared with the biopsy results, dividing the sample into false negative group A and true negative group B. Clinical, radiological, histopathological parameters and therapeutic strategies were compared between the two groups. Data was analysed using SPSS 20.

Results: Of the 781 patients with mean age 49.39±11.51 years, 154(19.7%) were in group A and 627(80.2%) were in group B, with negative predictive value of 80.2%. Initial tumour size, histopathology, tumour grade, receptors, timing of chemotherapy, and type of surgery has significant difference between the groups (p<0.05). Multivariate analysis showed larger, high-grade, progesterone receptor negative and human epidermal growth factor receptor 2 positive tumours were significantly associated with lower false negative rate on axillary ultrasound (p<0.05).

Axillary staging is the integral component of breast cancer management. Historically, complete axillary lymph node dissection (ALND) used to be considered not only the standard axillary staging and therapeutic procedure, but also a significant prognostic tool to guide adjuvant treatment. The evolution from the Halstead’s theory of “radical local control” to the Fisher’s theory of breast cancer as a “systemic disease” laid the cornerstone for the conservative surgical approach in both breast and axilla.1,2 The understanding that axillary dissection provides no survival benefit, rather it increases morbidity and advancements in adjuvant treatment modalities, has led researchers to look into lesser invasive alternatives to ALND.3 The advent of sentinel lymph node biopsy (SLNB) was the first landmark towards the de-escalation of axillary surgery. It has taken over the staging and prognostic role of ALND, with lesser morbidity, in clinically node-negative patients.3 At present, SLNB is considered the gold standard in axillary staging not only in node-negative patients, but also in selected clinically node-positive patients as well.4-6 The management of axilla has been revolutionised by the results of a trial which actually questioned the role of SLNB in the presence of low-burden axillary disease.7 SLNB, though less invasive than ALND, is a costly procedure, has its associated morbidity, carries radiation hazards, and needs specialised equipment as well as expertise.8,9 The continuous quest for obviating the element of invasiveness from axillary management, advancements in imaging modalities, understanding of tumour biology and introduction of multigene assays as prognostic tools governing adjuvant therapies, have paved the way for the adoption of non-invasive imaging modalities for axillary staging, thus sparing a selected group of patients, especially with low-burden disease / benign looking lymph nodes from the morbidity of SLNB.

The concept of no SLNB and just observation in node-negative early breast cancer patients is at the centre of various ongoing trials and past studies.10,11 The basis of this concept is the accurate pre-operative categorisation of axillary nodes into benign or suspicious according to standardised criteria by some non-invasive imaging modality. Among various modalities, axillary ultrasound (AUS) has been widely investigated as a non-invasive alternative to SLNB.12 While being operator-dependent, it is cost-effective, readily available, reproducible, and avoids any radiation exposure. The sensitivity and specificity of AUS has been reported to be 61.4% (51.2-79.4%) and 82% (76.9-89%), respectively.13,14 One of the drawbacks of AUS is its false negative (FN) results, i.e. its potential to miss positive nodal disease. Improvement in the learning curves of radiologists and use of higher-frequency probes and newer techniques, like automated breast ultrasonography (ABUS), will further reduce the FN rate (FNR), thus validating this technique for axillary staging in place of SLNB.14 A lymph node is considered ‘normal’ on ultrasound in the absence of certain features like rounded shape, irregular margins, absence of fatty hilum, and cortical thickness >3mm, while it is ‘suspicious’ for metastasis if it shows one or more of the aforementioned features15 (Figure 1-2). A lymph node is said to be positive for metastasis on SLNB if it contains one or more tumour deposits >2mm (macro metastasis).16 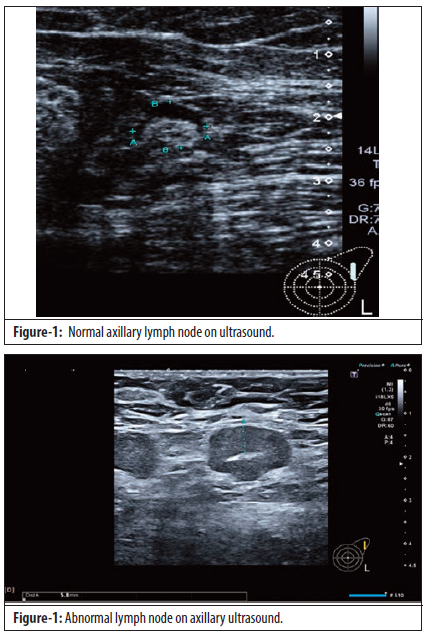 The retrospective study was conducted at Shaukat Khanum Memorial Cancer Hospital, Lahore, Pakistan, and comprised patient data from January 2019 to December 2020. After approval from the institutional ethics review board, data was retrieved from the institutional prospectively maintained database. Data related to newly diagnosed breast cancer patients with either normal lymph nodes on pre-treatment AUS or single suspicious / borderline lymph node negative for metastasis on fine needle aspiration cytology (FNAC), radiological T1, T2 or T3 tumours, having invasive cancer on histopathology, and who underwent SLNB. Data of patients with multiple suspicious nodes on AUS, T4 / inflammatory cancer, invasive cancer only, previously treated ipsilateral cancer / recurrent breast cancer and of those who had initial lumpectomy somewhere else were excluded.

All AUSs were performed by trained breast sonologists and their results were compared with SLNB results, taken as the gold standard, thus dividing the sample into FN group A and true negative group B. Clinical, radiological and histopathological parameters as well as therapeutic strategies were compared between the two groups.

Data was analysed using SPSS 20. Mean±standard deviation values were calculated for quantitative data, whereas frequencies and percentages were used to express qualitative data. The association of explanatory variables in relation to TN or FN status was determined using chi-square test or Fisher exact test, as appropriate. Independent t-test was used to compare the mean between the groups. Univariate and multivariate logistic regression (MLR) were used to identify independent risk factors associated with FN status. Statistical significance was defined as two-tailed p≤0.05. 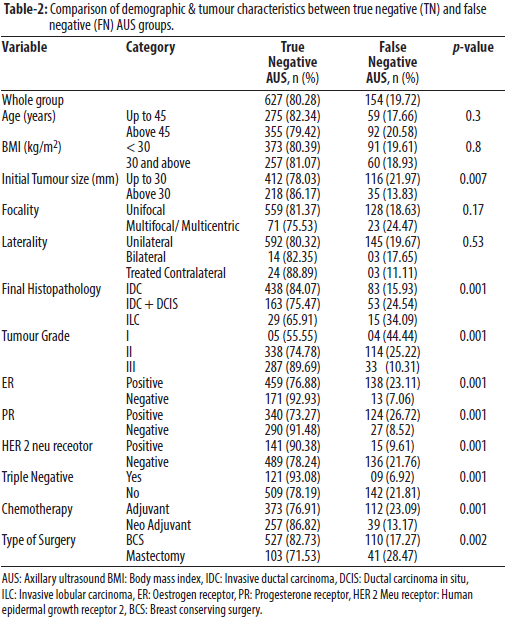 AUS is an important non-invasive staging technique for early-stage breast cancer, with a wide range of FNR and NPV across literature.12,17-23 The variation might be attributable to the differences in selection criteria, sample size and timing of ultrasound examination. It is a fact that our study has the highest number of patients compared to the other studies (Table 4). 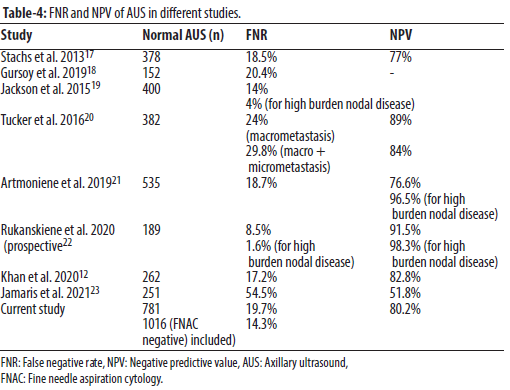 AUS is more reliable in excluding nodal disease in patients with high-burden nodal disease (3 or more positive lymph nodes). In the current study, only 18.3% of cases had high-burden disease. AUS was unable to detect nodal involvement despite pathological lymph node involvement on histopathology, whereas majority (81.7%) of patients with FN AUS had low-burden nodal disease (1 or 2 positive lymph nodes / micro-metastasis), most of whom would not have otherwise qualified for ALND as per one of the criteria,7 further eroding the staging role of SLNB in this subset of patients. These results are consistent with the results of Gursoy et al. and Reyna et al.18,24 Jackson et al. showed a trend towards lower FNR (14% overall vs 4% for high nodal burden) in patients with 3 or more diseased lymph nodes, while Artmoniene et al showed a high NPV of AUS in high-burden nodal disease (96.5% for high-burden vs 76.6% overall).19,21 Rukanskiene et al. reported similar trends in FNR (1.6% for high-burden vs 6.9% for low-burden disease) and NPV of AUS with higher nodal burden (98.3% for high -burden vs 91.5% overall).22

Tumour size is an important predictive factor for FNR of AUS.25 The mean tumour size in the present study was smaller in the FN group (25.2mm in FN vs 28.40mm in TN group, p=0.02). This is in contrast to the findings of Gursoy et al.18 According to Reyna et al., sensitivity of AUS increases with an increase in the size of primary breast lesion as well as the size of nodal metastasis and number of involved lymph nodes.24 The current study showed improved reliability of AUS in excluding nodal involvement with the increase in tumour size. Thus, larger the tumour size, lower the FNR and higher the true negativity rate (TNR) of AUS. The possible explanation for this could be that increasing tumour size increases the likelihood of detectable axillary nodal metastasis, thus reducing FNR.  Contrary to the current results, most studies reported a direct proportional relationship between the tumour size and FNR of AUS.18,19,21,22 However, Stachs et al. report a relationship between tumour size and FNR of AUS in concordance with the current study.17

Regarding the effect of tumour grade on false negativity of AUS, there exists a controversy in literature. According to Artmoniene et al., higher tumour grade is associated with higher FNR.21 This finding has been contradicted by Stachs et al. as well as by the current study, where inverse relationship has been reported between the tumour grade and FNR of AUS.17 The probability of significant axillary nodal metastasis increases with higher tumour grade owing to increased proliferation rate, thus minimising their chances of being missed on AUS.

Aggressive tumour biology and poor predictive factors, like larger size and higher grade, can lead to significant nodal metastasis with less likelihood of being missed on AUS, and, hence, lower FNR of AUS, as was evident in the current study. Moreover, this could possibly explain the association of lower FNR in patients who underwent surgery post-neo adjuvant chemotherapy (NAC) versus those who underwent upfront surgery (13.3% FNR in NAC vs 23.1% in upfront surgery) in our study. There is not much evidence regarding this association in literature as most studies only included upfront surgery in their respective

samples.17-19,21-23 Moreover, as the current study compared the results of AUS performed before the commencement of NAC with SLNB results, the lower FNR in this subset could be due to resolution of possible nodal metastasis by chemotherapy, highlighting the importance of uniform time span between AUS and surgery.

The current study has certain limitations. Firstly, being a retrospective single-centre study, it does not provide a very high level of evidence. However, strict inclusion/exclusion criteria were followed and a large number of patients were included, making the results comparable with literature. Secondly, the time span between the performance of ultrasound and surgery, especially in the post-NAC group, should have been standardised. Nevertheless, the novelty of concept is the biggest strength of the current study, paving the way for further prospective trials.

AUS was found to be effective in ruling out significant axillary nodal disease. The efficacy was more in patients with high-burden axillary disease, aggressive tumour biology, larger tumour size and higher grade. However, one needs to be cautious while interpreting the results of AUS in case of lobular histology. As far as FNR and NPV of AUS are concerned, the results were found to be concordant with global literature.