Objective:  To check if complete pathological response in breast cancer is a good prognostic factor.

Method: The retrospective study was conducted at the Shaukat Khanum Memorial Cancer Hospital and Research Centre, Lahore, Pakistan, and comprised data from January 2012 to December 2015 of all patients who received neo-adjuvant chemotherapy and had no distant metastasis at diagnosis. Mastectomy patients were excluded. Complete pathological response was defined as no detectable tumour cell in breast and axilla on pathological examination of the resected specimen. Tumour characteristics and 5-year disease free survival and overall survival were recorded. Data was analysed using SPSS 20.

Conclusion: Despite complete disappearance of tumour, a significant number of patients developed recurrences

Breast cancer is the second most common cancer worldwide and the first most common among women.1 The incidence is estimated to be 1 in 9 women2 in the local population. Mortality from breast cancer has declined in the West due to screening programmes.3

Breast cancer is increasingly treated with neo-adjuvant chemotherapy (NACT) to reduce the disease burden and to directly evaluate treatment response in vivo, which can provide additional prognostic information.4

With the advent of NACT, more patients are managed with breast conservation surgeries (BCS) due to better resectability, with similar survivals as in cases of mastectomy.5 Due to variability in tumour behaviour, the response to chemotherapy is also variable. Patients with ypT0N0(complete pathological response), meaning no detectable tumour by pathological examination of the resected tumour, are the ones who achieved complete pathological response (CPR). As pathologically, chemotherapy response is 100%, it is agreed that these patients are expected to have the best outcomes.

However, cases are seen in regular clinical practice that attain CPR, but then develop local or distant recurrence and die of it. The current study was planned to check if CPR in breast cancer is a good prognostic factor.

The retrospective study was conducted at the Shaukat Khanum Memorial Cancer Hospital and Research Centre, Lahore, Pakistan, and comprised data from January 2012 to December 2015 of patients who underwent BCS for invasive breast cancer after NACT. Patients with upfront surgery, mastectomy or distant metastases at presentation were excluded. BCS was defined as removal of only part of the breast tissue where the tumour was located. Usually 20% or less of tissue is removed, which is contrary to mastectomy in which the entire breast tissue, including nipple and areola, is removed.

After exemption from the institutional ethics review board, data was collected through the Human Information System (HIS) electronic database of the hospital. Variables recorded were age, tumour biology, clinical staging and survival outcomes.

Every patient had detailed history and examination in the walk-in clinic and was referred to One-Stop Breast Clinic (OSBC) for detailed assessment and investigation. Investigations included baseline blood tests, mammogram, ultrasound breast, true-cut biopsy of breast masses and FNA of axilla. Metastatic workup included ultrasound abdomen and pelvis, chest radiograph (CXR) or computed tomography (CT) scan, where indicated, and bone scan. Every case was discussed in multi-disciplinary team (MDT) meetings. As the data is collected in real time and stored, it allows for accurate retrospective review. 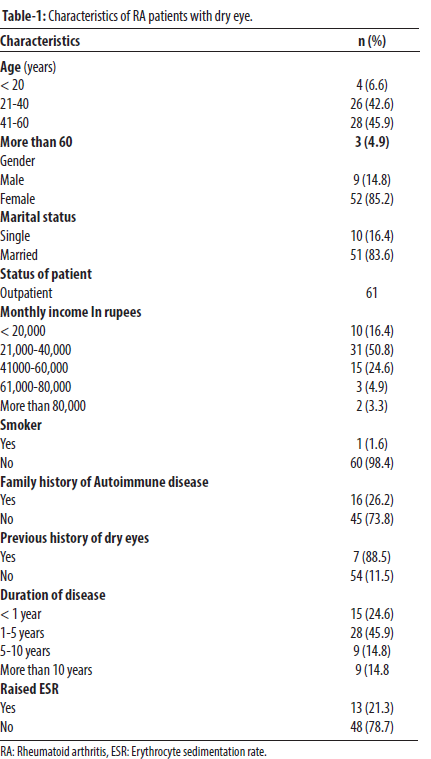 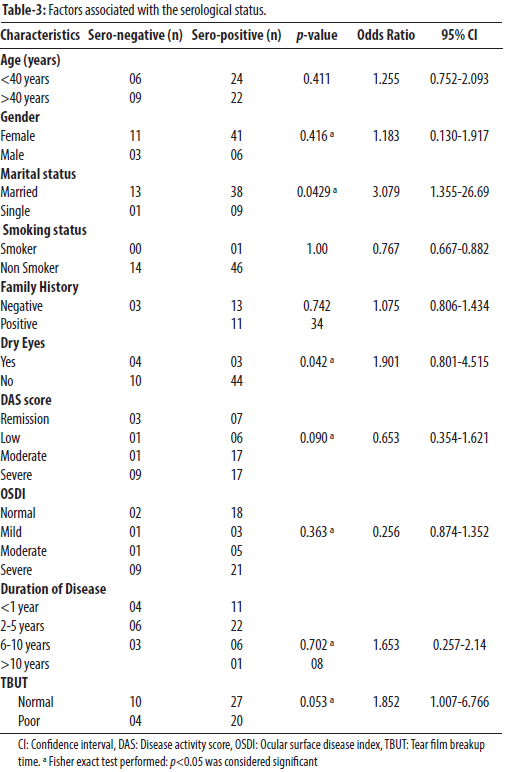 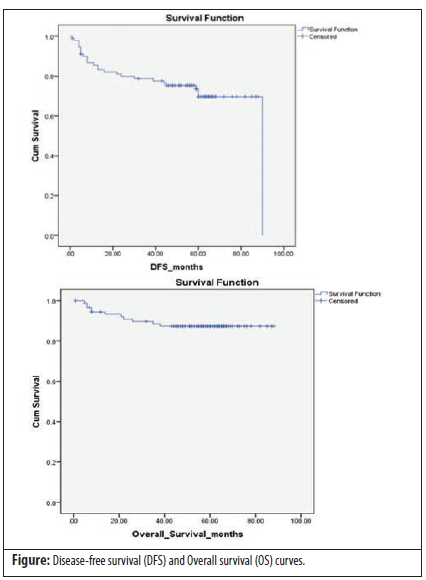 Chemotherapy has brought a ground-breaking change in the management of breast cancer. It has not only reduced mortality but has also helped in evolving surgical approach from radical to less invasive techinues.7,8 Thus, indirectly it has improved quality of life. The chemotherapy decision of being in adjuvant or neo-adjuvant setting depends on tumour stage and histological type. One obvious advantage of neo-adjuvant chemotherapy is its measurable impact in vivo, which obviously cannot be determined once the tumour is out of the body as is the case in adjuvant setting. Because of the heterogeneity of breast cancer, the tumour response is variable and is difficult to be predicted beforehand. Although many studies have shown some known tumour characteristics that can be helpful in predicting response, the problem with breast cancer is that most of its genome is not characterised or known that renders every breast cancer to behave differently despite having same characteristics in term of histology.

The current study highlighted the fact that complete response, contrary to what the name indicates, is not always a complete response because a significant proportion in the sample was not cured (30.7%).

Many researchers have worked on the factors that may have an association with the chemo response. Patients with ER-negative and PR-negative and HER-2-Neu-amplified breast cancer phenotypes are more likely to achieve CPR through neo-adjuvant therapy.7

However, among those with residual disease, the survival was the worst for triple negative and HER-2-Neu-enriched type compared to survival in hormone receptor-positive tumours.8,9 In the current study, only grade III tumours (68%) and ER-negative tumours (64%) were common. However, the study did not compare tumour biology markers with the group that did not achieve CPR, which is a limitation.

The prediction of chemo response cannot be correctly made, but many researchers believe better chemo response leads to better survival, especially in those who achieved a complete response and there in no residue in surgical specimen from both breast and axilla.10,11

Published studies have reported better survival in CPR group compared to those who did not achieve CPR.12-14

However, one study found that locally advanced breast cancer (LABC) (tumour [T]2, T3, node [N]0 or N1, metastasis [M]0, which was majority of the current population) showed no difference in DFS (p=0.67) or OS (p=0.41) between patients achieving a CPR and those with residual disease.15 One meta-analysis concluded not to use CPR as a surrogate endpoint for DFS and OS in patients with breast cancer.16

Many studies have worked on finding the factors that may predict recurrence. In one study, achieving CPR in triple negative breast cancer was associated with better DFS (p<0.001) compared to receptor-positive types (p=0.39).10 Others found HER-2 Neu status and axillary metastases as independent predictors of recurrence in patients with CPR.17,18 A meta-analysis studied 27,895 patients. Those with a CPR after NACT had significantly better DFS, particularly for triple negative and HER-2 Neu disease.19 In the current study, only PR-positive tumours that achieved CPR showed lesser recurrences (p=0.043), while the rest of tumour characteristics did not do well in recurrence terms. In one study, no factors were linked with recurrence, but it found Afro-American race as the only independent predictor of recurrence post-CPR.20

The pattern of recurrence in the current study was somewhat interesting, as most of recurrences were distant (20% distant vs 6% local), while all were metastasis-free at presentation. Distant metastasis was found at one or multiple sites in bone, liver, lungs, brain and mediastinal nodes. The reason might be that tumour biology of distant metastasis gets changed, so same chemotherapy was not as effective as it was on local/primary site. Because local disease recurrence was less common, the future might be total omission of surgery in patients with complete response.

One limitation of the current study was that it did not compare tumour biology markers with those who did not achieve CPR. Another possible limitation is that out of 25 HER-2-Neu-positive patients, only 17 received Herceptin. Equivocal (2+) status was found in 8 patients in whom further fluorescence in situ hybridization (FISH) testing was missed. It means not all HER-2-Neu-positive patients received Herceptin, which could have led to recurrence, but the recurrence score for positive and negative patients was not statistically significant.

One thing that could not be explained is the reason why almost one-third of the patients in the study had recurrence even after successful eradication of all tumour cells. A lot of work on molecular and genetic levels needs to be done to see this kind of tumour behaviour and to find the undetected tumour cells that caused the recurrence after successful treatment completion.

Despite complete disappearance of tumour, a significant number of patients developed recurrences. The focus should be on such patients who were assured of having the best outcomes. So far, all known tumour biological factors have not shown to be either a definitive predictor of the response or of the recurrence.