Method: The cross-sectional study was conducted at the Department of Genetics, Children Hospital, Lahore, Pakistan, from June 2016 to June 2017, and comprised of Down Syndrome patients aged <15 years. They were subjected to karyotypic analysis for determining the subtype of the syndrome, and echocardiography of all cases was done for the assessment of congenital cardiac defects. The two findings was subsequently used to establish a relation between the subtypes and congenital cardiac defects. Data collected, entered and analyzed by the SPSS version 20.0.

Down Syndrome (DS) is the most prevalent compatible with life aneoploidy that results due to an extra copy of chromosome 21. According to the World Health Organisation (WHO), DS is the third most frequent congenital anomaly and its incidence ranges from 1-2 in 1000 to 1 in 1100 livebirths the world over.1 As of 2015, an estimated 417,000 people with DS were living in Europe.2 In developed countries, DS prevalence is increased in individuals aged 40-55 years compared to adjacent age groups.3

The National Down Syndrome Society (NDSS) of the United States reported the frequency of cardiac defects as 44.5% to 63.4% in DS population.8  Almost 13% childhood DS cases and 23% adult DS cases succumb to death due to this defect, making it the second most potent cause of mortality.9,10  It happens more in atypical CHD cases compared to typical CHD cases concurring to the severity of accompanying defects.11

The relationship between various DS subtypes and pattern of cardiac anomalies has not been considered much, especially in Pakistani population data.12

The cross-sectional study was conducted at the Department of Genetics, Children Hospital, Lahore, Pakistan, from June 2016 to June 2017. The ethical approval was obtained from IRB for the research work through letter# 679/RC/KEMU. The sample was raised using non-probability purposive sampling technique and informed consent was taken from the guardians or the DS individuals registered with the Genetic Department and Cardiac Surgery Department of the hospital, having 9 out of 14 selected phenotypic DS characteristics. All the physical parameters were recorded on a predesigned performa developed in the light of literature.13

Those selected were DS patients aged <15 years. Operational definitions were used for a confirmed diagnosis. Trisomy 21 was considered when karyotyping led to all the samples showing an extra chromosome at chromosome 21. Mosaicism was detected when all samples had double cell lines. Translocation was identified when, on karyotyping, all samples with chromosome 21 were attached with any other acrocentric chromosome.

CHD meant a structural defect or abnormality of the heart or the intra-thoracic great vessels which could be confirmed on echocardiography.

The sample size was calculated using single population proportion formula (Z2 *(p)*(1-p)/(e)2) formula,14 where z=1.28 (for 80% confidence level), p= prevalence of CHD in DS as 45%, and e(margin of error) = 0.05. Data for Age was described using Mean and Standard Deviation. Data for presence of congenital heart defects, subtypes of congenital heart defects and subtypes of Down syndrome was reported by using frequencies and percentages.

Relevant demographic and clinical data was noted, and physical examination was done in a specified room with comfortable and warm environment in the presence of guardian/parent. It was made sure that the child was not agitated or irritated by any instrument or by the examiner.

Karyotyping of all cases was done in order to confirm DS. A blood sample of 2ml was drawn through a syringe and immediately transferred to sterile vacuette heparin tube. After half-an-hour, the sample was transferred to a labelled culture flask and later on moved in an incubator for 72 hours at 37 degree Celsius for harvesting. By the end of 72 hours, 100µl (0.1ml) colcemid was added to arrest the cells in metaphase of cell division. Repeated cycles of adding fixative, centrifugation and discarding supernatant were performed till the fluid became milky due to cell pellet formation. Slides were stained by Giemsa stain for g-banding. Chromosomes were arranged in pairs by their size, length of chromosome and placement of centromere with the help of MAC Type 4software. The autosomes pairs were numbered from the largest (No1) to the smallest (No 22). Any deficient or extra copy of sex chromosome was specially looked for. Multiple metaphase spreads were viewed and analysed. Samples with normal karyotyping were excluded.

After the confirmation of aneuploidy, Echocardiography of all DS cases was done for the detection of cardiac defect by a specialist paediatric cardiologist. The presence and the type of heart defect were recorded.

All the participants were subjected to karyotypic analysis for determining the DS subtype, and echocardiography of all cases was done for the assessment of CHD. The two findings were subsequently used to establish a relation between the subtypes and CHD. Comparison of congenital heart defects among types of Down syndrome was performed by using chi-square test.

Comparison of types of congenital heart defects among subtypes of Down syndrome was performed by using likelihood ratio test. 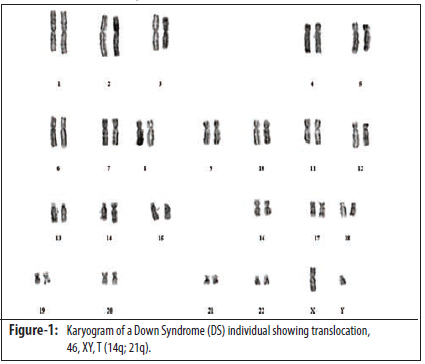 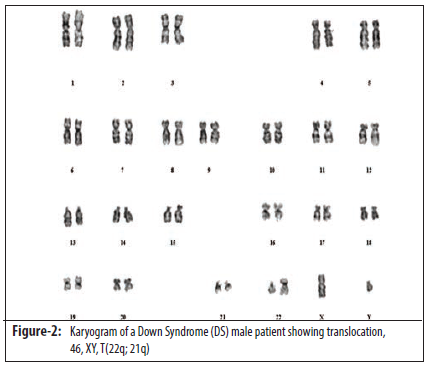 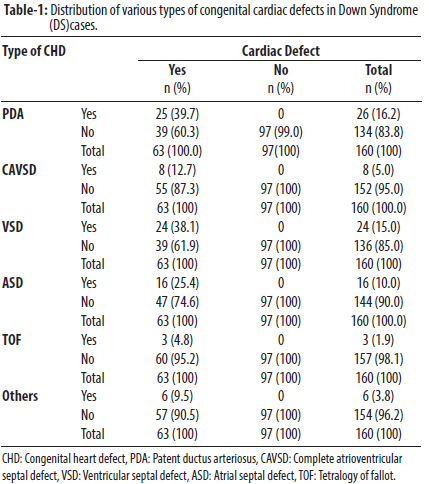 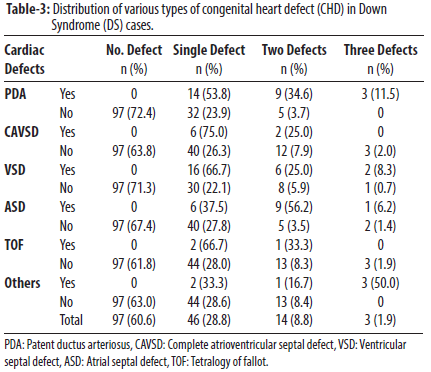 The karyotypic analysis of 160 DS cases revealed that 96.2% cases had non-disjunction of chromosome 21. Robertsonian translocation was found in 3.1%, whereas 0.6% was mosaics. The findings are in congruence with several studies.14-18  Higher frequency of translocation was reported by two studies done in India19,20. With the same geographical, ethnic and cultural background, the difference in results in Indian studies could be explained on the basis of difference in total number of cases, but may be indicative of an underlying aetiological phenomenon yet to be explored.

In order to comment on the level at which translocation hits the genes in pedigree, it was imperative to do maternal and paternal karyotyping, but this was beyond the scope of the current study. Future studies must explore this aspect in order to understand the basis of pathology.

The frequency of cardiac defects in the current study DS population was 39.4%. It was compared with literature ad differences were found(Table-4).18-22

The minor differences could be attributed racial and geographical inequalities related to aetiology of cardiac defects, as they are not solely controlled by genetic factors.

PDA was the commonest congenital cardiac defect affecting 39.7% DS cases as an isolated defect. This was in agreement with Layangool et al.25

VSD (38.1%) was the second highest isolated defect. This result was similar to earlier studies.26,27  In the present study, the most common VSD was Peri-membranous (66.6%). In addition, we noticed high rate of subaortic ventricular defects (20.83%) as well as muscular VSD (8.33%) in the present study. Hence, Type 2 VSD dominated in the current study (87.4%). Further exploration of the factors responsible for causing these types of VSD can lead us to the aetiological basis of cardiac defects in DS.

The frequency of CAVSD, which is a complex cardiac defect, was 12.7%.This was in contrast to the findings reported from Turkey.30  An American study reported 40%.31  Several studies have been conducted to evaluate the genetic basis of this defect and reported cysteine-rich with epidermal growth factor (EGF)-like domains 1 (CRELD1) gene to be the cause of its higher representation along with other factors.32  A large study conducted in 2013 on 588 DS cases reported CAVSD frequency to be 15.6%. It suggested that the results of Asian studies support lower frequency of CAVSD compared to the Caucasian studies. Hence, the current study also supports the assertion.8  In 2014, Kim et al. reported AVSD to be 9.4% in 25,975 Korean DD cases with CHDs.33

This geographical difference leaves room for further research in order to explore the cardio-genetics operating in the background.

This variation in the frequency of cardiac phenotypes can be described by single nucleotide polymorphism (SNP) and copy number variant (CNV) theory which elaborates the degree of susceptibility to specific CHDs in various ethnicities.34

Phenotypic expression displays the intricate molecular mechanisms that vary for different populations. This finding calls for intricate research analysis of molecular mechanism controlling the disese.35 The scope of the current study only allowed observation of the manifestation of cardiac anomalies in DS, and not the effect of DS on cardiac phenotype, which is a limitation.

Cytogenetically, 96.2% of DS population was trisomy 21, 0.6% were mosaics and 3.1% translocation. The recurrent anomaly was PDA, followed by VSD. VSDs were prone to occurring as single cardiac defect, ASDs tended to manifest mostly as double cardiac defects, while PDAs inclined to exist with two other cardiac anomalies.

Disclaimer: The text is based on a research work.

29.    Jaouad IC, Cherkaoui Deqaqi S, Sbiti A, Natiq A, Elkerch F, Sefiani A. Cytogenetic and epidemiological profiles of Down syndrome in a Moroccan population: a report of 852 cases. Singapore Med J 2010;51:133-6.